Comparing Apples with oranges, you might say, given that Microsoft’s Surface Books are really convertible tablet/laptop hybrids rather than purestrain laptops. But these two releases, announced a day apart, are shooting for the same audience of wealthy enterprise users and creatives, so plenty of tech fans are going to be weighing up the pros and cons of each. Looks-wise it’s all about the Mac, even though the Surface Book has a certain clunky charm all its own. The range of software available for the Surface Book, however – and particularly its standard of integration with Microsoft’s business/productivity software products – may push business users in the other direction; while designers may (continue to) prefer the software offerings of Apple and its partners, and long-term Mac fans are unlikely to be swayed from the superior security of the macOS platform. Ultimately, though, your decision is going to revolve around the major physical differences between these machines: do you want and need a touchscreen display and a stylus, and would you like to be able to detach the keyboard and change your laptop into a tablet? If so, and assuming you can’t be fobbed off with a combination of a (potentially lower-end) iPad with the MacBook – a stronger combination in many ways, albeit less convenient to tote around – then the extra money for the Surface Book will be money well spent.

Which is the best laptop: the new MacBook Pro 2016, or the Surface Book 2/new Surface Book with Performance Base?

Welcome to our New MacBook Pro 2016 vs new Surface Book with Performance Base comparison, in which we compare and contrast the newly announced MacBook Pro 2016 and the Surface Book 2. This is based on the tech specs and feature announcements made by the two companies, as well as brief hands-on time at the MacBook Pro launch event; we’ll update this article with in-depth testing once we’ve spent more time with the two machines.

It’s just like the olden days: Microsoft and Apple, going head to head, announcing competing products and taking shots at one another. But instead of operating systems and web browsers, they’re duelling in the field of high-end laptops.

Microsoft announced an updated version of the Surface Book on 26 October 2016, which has variously been referred to as the Surface Book i7 (confusingly, since last year’s model also came with a Skylake i7 processor), Surface Book 2 (unofficially) and the Surface Book with Performance Base. The next night, Apple held its own event where it unveiled the long-awaited update to its MacBook Pro laptop line: the new MacBook Pro 2016 with Touch Bar.

In our New MacBook Pro 2016 vs new Surface Book with Performance Base comparison we put the two laptops head to head, comparing design, build quality, features, tech specs and pricing.

New MacBook Pro 2016 vs Surface Book with Performance Base: Design and build quality

As you’d probably expect when comparing an Apple with a Microsoft product, this feels a little one-sided: we greatly prefer the looks of the MacBook, even though its general design has been around for a while now. (It’s thinner than last year’s MacBook Pro, has a different port layout and even comes with a flashy new Touch bar above the keyboard, but the design language nevertheless feels familiar.) The MacBook is elegant, slim and minimal.

But it doesn’t all go Apple’s way. The Surface Book has an appeal of its own, even though that chunky, almost reptilian hinge puts us in mind of the early 1990s. The keyboard looks good, albeit quite Apple-esque; the screen section is smart and simple in design; and you get USB 3.0 ports, which are probably more convenient at this point than USB-C (the MacBook gets 2 or 4 USB-C ports, a headphone port and nothing else), as well as an SD card slot for increasing storage and Mini-DisplayPort.

The Surface Book is a little heavier than the equivalent MacBook: 1.65kg to 1.37kg. It does offer a fractionally larger screen than that machine, though. More on the dimensions and vital statistics in the specs section. 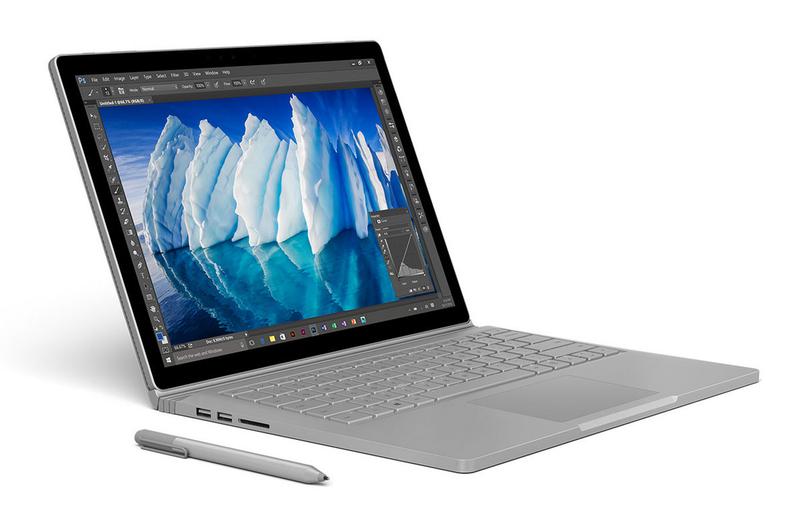 New MacBook Pro 2016 vs Surface Book with Performance Base: Features

Apple spent a large segment of its MacBook Pro launch event talking about one specific feature: the Touch Bar. Let’s talk about the advantages of the Touch Bar, and the features that Microsoft can offer in turn.

The 2016 MacBook Pros, with one exception (a comparatively cut-price 13-inch model with normal function keys) come with Touch Bar, a touch-sensitive bar above the keyboard. This replaces the hardware function keys and Esc (although in many configurations a software Escape key will appear, and you can bring up the function keys at any time by pressing the Fn button). Microsoft’s new Surface Book has no such feature. 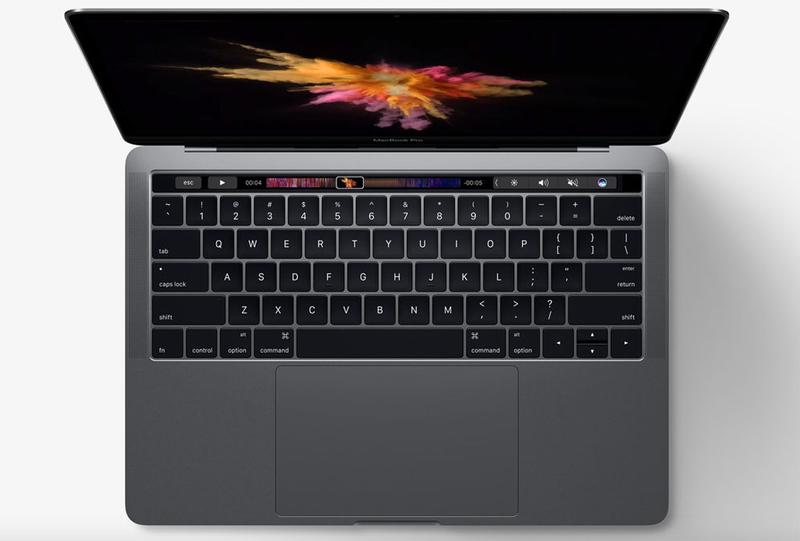 The Touch Bar is in essence a tiny multitouch touchscreen. The icons displayed on the bar – and the functions performed if you tap them – change depending on the application you’re running and any customisation options you’ve selected. The default Touch Bar layout in Safari, for instance, includes thumbnail bookmarks and forward and back buttons; in Photos you get a swipable thumbnail gallery of images; when a FaceTime call comes in (or a phone call on a companion iPhone) you get Accept and Decline buttons. Many of these layouts can be customised.

The Touch Bar looks lovely but until we’ve spent more time with the feature it’s hard to say whether it’ll be a gimmick or a godsend. In the meantime, learn more about the Touch Bar’s capabilities here: How to use Touch Bar on the new MacBook Pro.

In some respects the Surface Book and MacBook are odd devices to compare, given their markedly different forms: the Surface Book is closer to a tablet than a conventional laptop, really. In the design section we mentioned its ability to separate – the keyboard is detachable, which comes in handy for the many situations where portability is more important than fast and accurate typing – but its real trump card over the Mac comes hand in hand with this. The Surface Book has a touchscreen display. 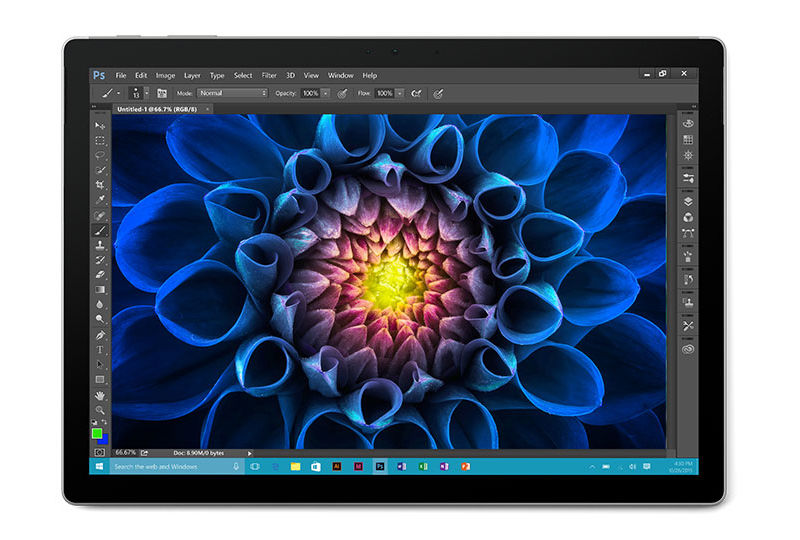 Apple has shied away from the idea of a touchscreen Mac, but there are plenty of laptops out there that do feature touchscreen displays. It’s not for everyone, but the success of smartphones and tablets demonstrates the appeal of the idea: there’s something primally accessible about wanting to do something in a computer interface and simply reaching out and touching it.

More relevantly to the high-end/enterprise market at home Microsoft is marketing the Surface Book, a touchscreen is far more suited to certain work activities. Most design work benefits from a touchscreen and stylus combination. (The Surface Book is bundled with a stylus, the Surface Pen.) Note-taking and signing or collaborating on documents can be a lot quicker and simpler if you can scribble directly on the screen.

In this section we list the two devices’ tech specs. Bear in mind that for a great number of these, the precise spec is up to you: both companies allow you to configure the laptop of your choice to some extent.

A couple of highlights worth mentioning, however: the Surface Book has a better screen resolution, although not by a huge margin (3000 x 2000 at 267 pixels per inch, compared to 2560 x 1600 and 227ppi on the smaller MacBook). And the new Surface Book with Performance Base has an improved battery life – Microsoft claims – over last year’s model. We’ve not been told the precise capacities, but Microsoft says this has gone up from 12 hours to 16.

Surface Book with Performance Base specs

We’ve covered the design and tech specs of these two product lines, but the deciding factor for many of us, sadly, will be whether or not they fit in our budgets. Here’s how they compare in terms of price.

There’s no way round this: the new MacBook Pro is expensive. The range starts at £1,449 – which you might say doesn’t really count, because you don’t get the flagship Touch Bar feature – and the most expensive base model is £2,699. And you can of course increase this still further by boosting that machine’s processor to 2.9GHz (+£180), its SSD to 2TB (+£1,080) and so on.

These prices are controversially high, but this is not entirely Apple’s fault: it appears that the company has raised its UK prices in response to the weakness of the pound following the Brexit referendum.

You can buy (and configure) the 2016 MacBook Pro on Apple’s website.

UK pricing of the new i7 Surface Book hasn’t been announced yet, but it’s likely to be even more expensive than the MacBook Pro. 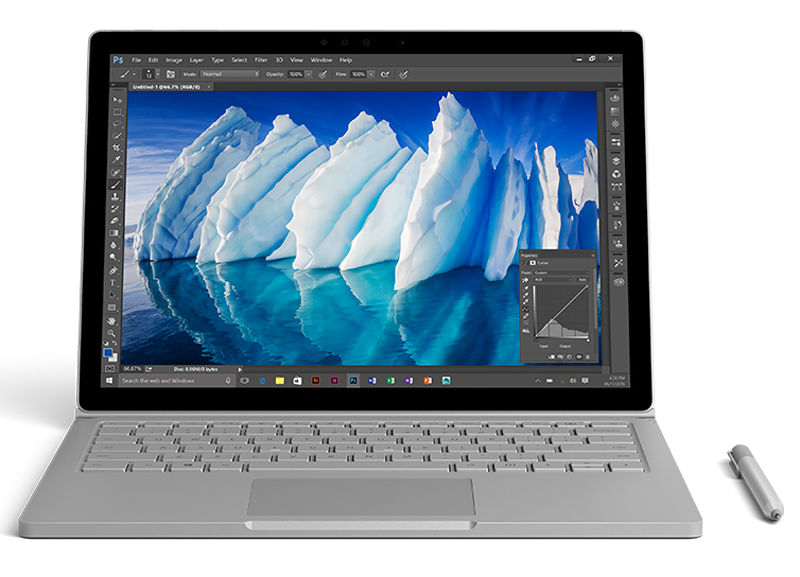 Read next: If you’d be interested in a comparison of the same two machines from a slightly more Windows-oriented perspective, you might like to read this article by our colleagues on PC Advisor: Surface Book i7 vs MacBook Pro: Which is the best laptop?