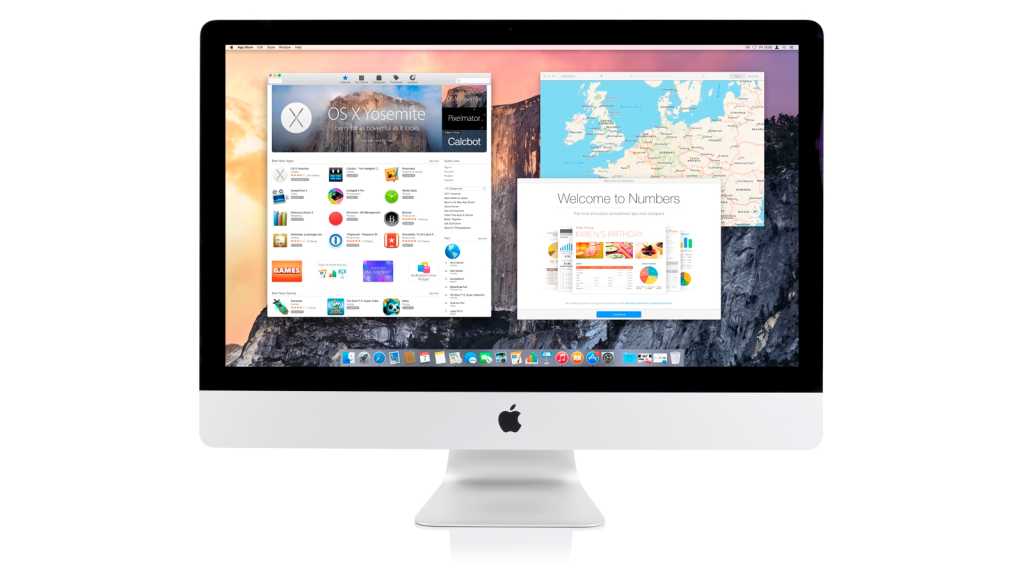 While we admit that the Surface Studio is an impressive bit of kit, the extremely high price tag makes it hard to recommend over the iMac 5K. The Surface Studio would only be worth the extra money if you were really going to get use out of the touch-enabled display, and we think that for the most part, that’d only be full-time artists. If you’re looking for a good looking, powerful all-in-one computer to do more than draw, we’d opt for Apple’s iMac 5K.

The Microsoft Surface Studio and Apple’s iMac are very, very different beasts. The Surface Studio is primarily a tool for designers and artists who would have traditionally coupled a computer with a Wacom tablet – it essentially combines the two devices. While the iMac is a powerful Mac, popular with creatives, but not a standalone drawing device.

But this hasn’t stopped comparisons being made and parallels being drawn between the two all-in-ones. In some ways it’s reignited the old Mac versus PC debate – with Apple’s macOS Sierra on one side and Microsoft’s Windows 10 on the other – because if a designer can purchase one all-in-one that combines a tablet with a computer why would they choose to buy an iMac, unless they really want to use macOS.

Apple’s answer to the Surface Studio might be to couple your iMac with an iPad Pro as a drawing device, but given the fact that the iPad Pro lacks the professional apps creatives need, this isn’t really a viable solution as yet.

The Surface Studio, on-the-other-hand has all the software available on Windows available to it, so there are no limitations there (assuming the specs of the machine meet the needs of the software).

Is the Surface Studio something Apple should be afraid of? Is it giving the iMac a run for its money? We’ve pitted Apple’s and Microsoft’s all-in-one PCs against each other to see which one will offer the best solution to creatives. Read next: macOS Sierra tips.

Before we get into the details of the two big-screen all-in-ones, let’s discuss pricing and availability for Apple’s 5K 27-inch iMac (reviewed here: iMac 27-inch (2017) review) and Microsoft’s Surface Studio ( reviewed here).

While the iMac comes in two sizes (21in and 27in), Microsoft’s Studio only comes in one (28in) so we’re going to focus only on the 27in iMac in this article, but it’s worth remembering that there is a smaller, cheaper iMac available for those interested (reviewed here: iMac 21.5-inch (2017) review).

The UK pricing for the Microsoft Surface Studio starts at £3,000 and tops out at a staggering £4,250.

At this price the Surface Studio is clearly not for the average consumer, it is more focused on creative professionals.

Both the Surface Studio and the iMac are available to buy now.

You can buy the Surface Studio here, and buy the iMac here.

Microsoft may have taken some inspiration from the Apple iMac when designing the Surface Studio because the two look similar. However, there are quite a few differences between the two all-in-ones.

The iMac features a 27in display with the internals of the Mac built directly into it, providing a clean and tidy look. The display is held by a very thin stand that provides adjustment to the angle of the display. 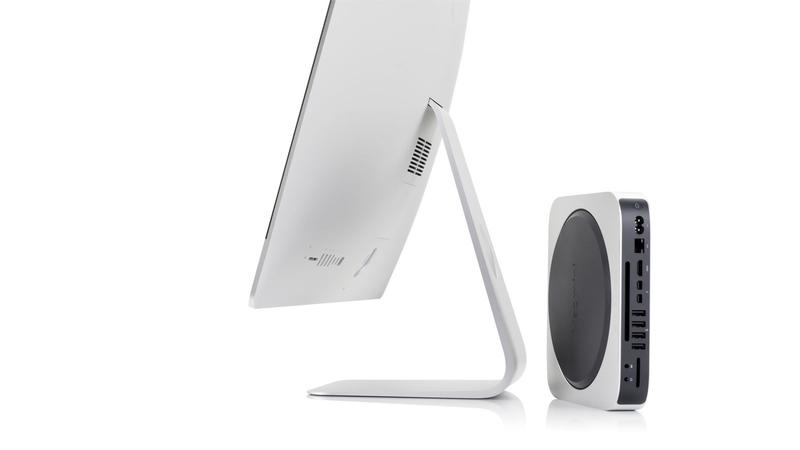 The 28in Surface Studio is somewhat different. First up, the internals aren’t actually built directly into the display – it’s all packed into a small silver box that sits at the base of the stand. While this is an extra component when compared to the iMac, this allowed Microsoft to make the display incredibly thin at 12.5mm.

The Studio is also much more adjustable thanks to the intuitive hinge on the back of the screen, providing multiple viewing angles including one where the Studio is almost flat on the desk at 20-degreed, which is apprently the typical set up for a drawing board and perfect for stylus use.

A key difference between the two screens is that the iMac screen is a widescreen display, 16:9, while the Surface Studio has an unusual 3:2 display, which is Microsoft believes is more suitable for artists. Essentially, a widescreen display would restrict artists who wished to work in portrait.

Despite the thin design, both the iMac 5K and Surface Studio are fairly weighty computers, weighing in at 9.5KG, but can still be moved around without too much effort. Both also come with a wireless keyboard and mouse, although the Surface Studio also comes with a Surface Pen stylus to make use of the multitouch display. 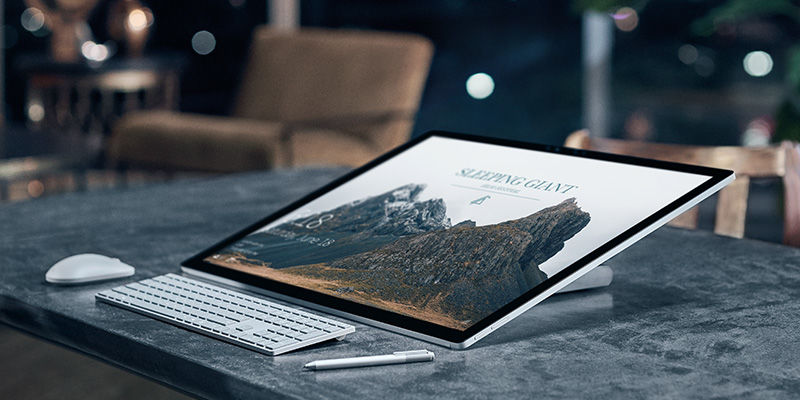 Let’s get down to the nitty gritty of the comparison – specs and hardware. Before we go into too much detail, it’s worth mentioning that the Microsoft Surface Studio was announced in October 2016 while the 5K iMac was updated in June 2017.

Let’s first start with the display, the main talking point for both the iMac 5K and Surface Studio. As mentioned above, the iMac 5K has a slightly smaller display than the Surface Studio, measuring in at 27- compared to 28in, but it’s the technology inside that makes the two wildly different.

The iMac 5K features a 5K retina display with an IPS panel, boasting an impressive resolution of 5,120×2,880 and a pixel density of 217ppi, with smaller iMacs offering full HD or 4K resolutions.

The Surface Studio on the other hand features a “PixelSense” display with a 3:2 aspect ratio and a resolution of 4,500×3,000 resulting in a 192ppi pixel density.

However, one advantage that the Surface Studio does have is that it is a touchscreen that can register up to 10 points of contact at the same time. This allows you to use both the Surface Pen and Surface Dial directly on the display, as well as your fingers to navigate your way around Windows 10. 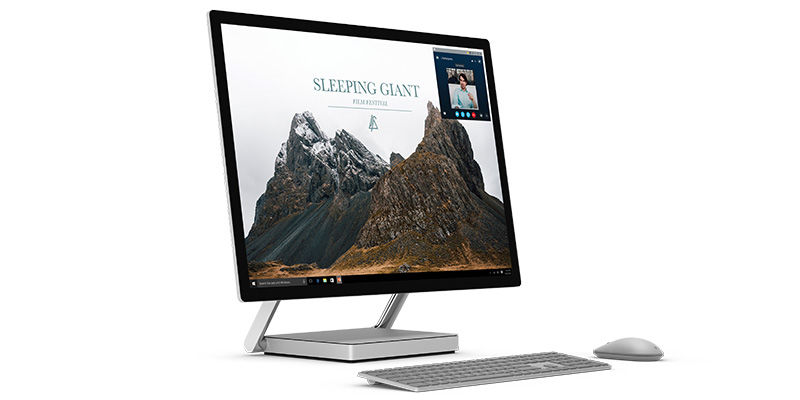 The six months between the release of Microsoft’s Surface Studio, the Studio and the 2017 iMac means that the Studio features older components. But even at the time of launch the components weren’t the newest or most powerful.

The surface uses the kind of components you’d find in gaming laptops, while the iMac is designed for more powerful operations.

These processors are available at either Core i5 or Core i7. However, the Core i7 processor is only available as a £180 add-on on the 5K iMac, while they are available as standard for the mid- and high-range configurations of the Surface Studio (although with a much higher price point than the iMac).

What about RAM? All variants of the iMac 5K feature 8GB of RAM as standard, comprised of two 4GB sticks, with the option of boosting that up to 64GB if you’re happy to pay a little extra on top.

Microsoft offers similar options (8-, 16 or 32GB), although the amount of RAM increases with each option rather than it being an aftermarket upgrade.

Read next:  Siri vs Cortana vs Google Now vs Amazon Echo Alexa

The two all-in-ones are fairly similar when it comes to storage, as you’ll get 1TB for the low- and mid-range options, and 2TB if you opt for the top-end iMac 5K or Surface Studio.

Where the iMac features a Fusion Drive, combining traditional HDDs with speedy SSDs for better performance. The Surface Studio offers a ‘Rapid Hybrid Drive’ which is basically the same thing. 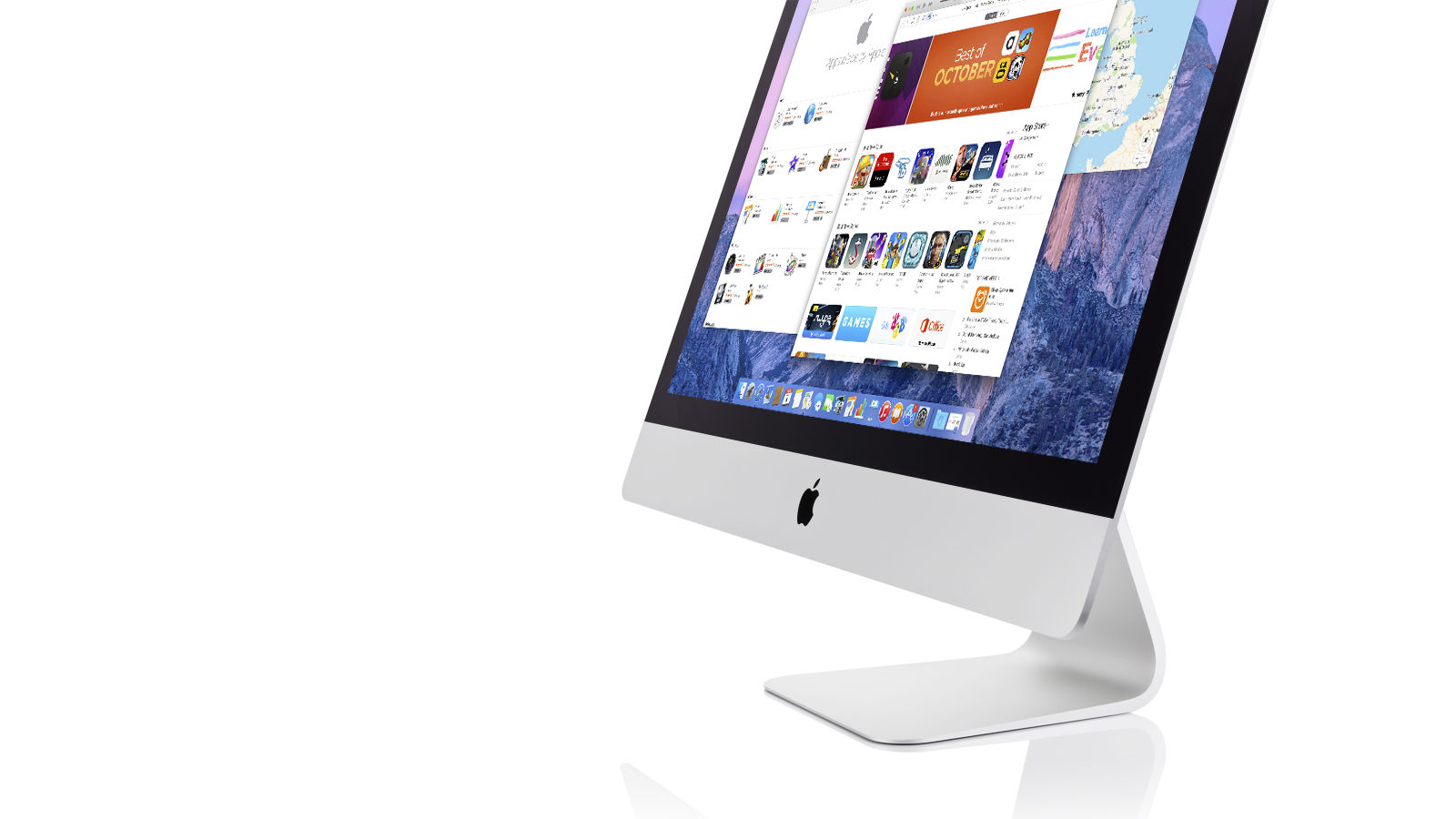 So, what does the iMac 5K feature in the graphics department? The iMac comes with an AMD Radeon Pro 570 or 575 with 4GB of VRAM, or a Radeon Pro 580 with 8GB VRAM on the top-end model.

The decision to use older graphics cards in the machine is puzzling, especially since the GTX 10 mobile GPUs available to buy at the time the machine went on sale. It seems that Microsoft felt that the market for the device wouldn’t need the most up-to-date graphics cards. Apple, on-the-other-hand, wanted to make sure that the iMac would meet demands of the most demanding graphics professionals including those working in VR.

There are some smaller features of the iMac 5K and the Microsoft Surface Studio that are worth singling out.

The most obvious difference is in terms of software with the iMac 5K running Apple’s latest operating system, macOS Sierra, while Microsoft’s Surface Studio will feature the latest iteration of Windows 10 – but we won’t go into those differences here.