We went in with an open mind but a degree of scepticism; could Mario be transplanted into a modern mobile game – a free auto runner, no less – with his soul intact? But the fun we’ve had with Super Mario Run has put most of those fears to bed. It may be free, but the pricing model is fair and non-exploitative (faint praise, perhaps, but by no means assumed in the murky world of IAPs!). Some may baulk at £7.99 to unlock the full game, but it’s a one-off payment, perfectly good value in our view for a full and beautifully designed game, and you get plenty of opportunity to try out the early levels for free before committing yourself. No one is getting tricked out of their money. And the auto running aspect seems completely natural, thanks to the sheer effort the designers have put into making each level work with the new control method. This is the gold standard of level design we have come to expect from the Mario team over the years. The greatest compliment we can pay the designers is that this just feels like another Mario game. To achieve that on mobile is astonishing. However, the requirement that you have access to an internet connection in order to open and run the app is hugely disappointing. This kind of thing caused annoyance when Diablo 3 came out in 2012, but that was a PC game, so a consistent internet connection was a reasonable expectation. But this is supposed to be a mobile game, and there are numerous situations when you’ll want to play the game but won’t be able to because of this absurd, unnecessary and infuriating ‘feature’ of the game. If it wasn’t for the always-online requirement, this would have been a five-star review – and if you’re going to always play in locations with a secure and consistent connection, and you’re not worried about Nintendo’s servers going down, then you can continue to treat this as a glowing recommendation. But for the rest of us, this is a hugely frustrating fly in an otherwise charming ointment.

On the whole, we’re very impressed by Super Mario Run – although we have serious concerns about the always-online requirements – but if you want to know more than that, you’ll have to read on.

Super Mario Run is nominally split into three modes, although the first, World Tour, is sure to dominate your play time, at least at first. World Tour is Mario as it would ordinarily be understood: a series of worlds, each divided up into three conventional levels and a Bowser’s castle boss level to finish up. (In this simple structure SMR harks back to the very earliest Mario games.) 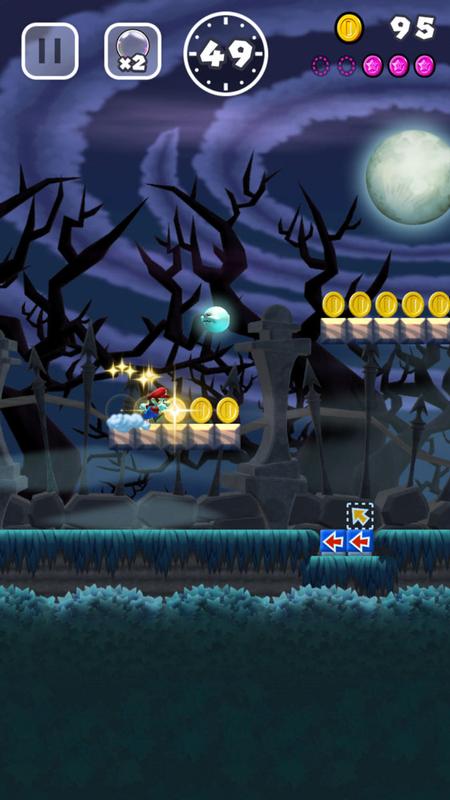 The second mode, Toad Rally, is a bit more unconventional and social: it involves trying to beat the performances of other players. You’ll be presented with a series of high scores, in effect, recorded by real-world players, and if you see one you reckon you can beat, and have a spare ticket to pay for entry (these are acquired in World Tour), you can take it on. You play against a ghost of the player’s performance, ‘as live’ as it were, and try to pick up more coins, impress more Toads (using the various new flips and tricks) and generally outperform your rival in the time allowed.

It’s also possible to play Toad Rally games against actual friends you know in the real world, as a sort of local multiplayer. This doesn’t cost tickets, but doesn’t earn you rewards either.

The final mode is called Kingdom Builder and is really just a place to go to spend your ill-gotten gains from the other two modes. You gradually build up your own little kingdom, adding decorative elements and new buildings when your acquired resources allow it; some of the new buildings bring with them bonus games and other goodies. This is where impressing Toads in Toad Rally is particularly important: if you impress them, they’ll come and live in your kingdom, and the more Toads you’ve got of each colour, the more other stuff you can unlock.

A fourth mode is on the way soon, and will be added to the game in a free update on September 29. Called Remix 10, the new mode will apparently mix together snippets from various levels for a set of new creations for players to explore, with extra rewards along the way. The same update will also introduce a new playable character, Daisy, and a new world for World Tour: World Star. 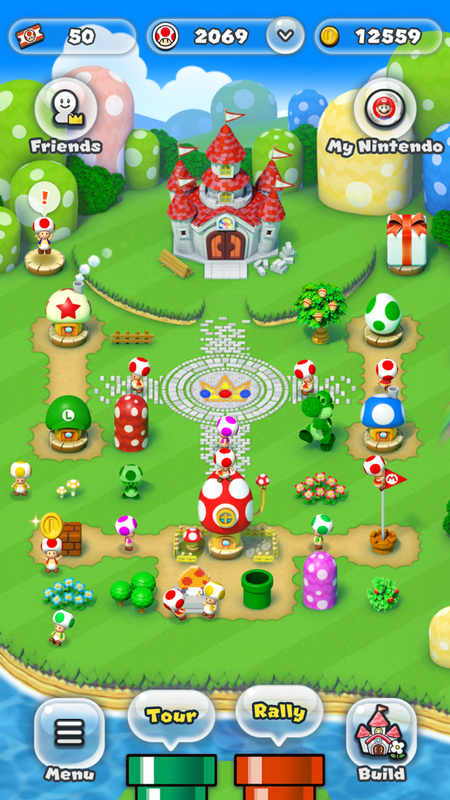 The essence of SMR across both World Tour and Toad Rally, the principle underlying every design decision, is that it is played with one hand. (Entertainingly, Shigeru Miyamoto says this is to allow players to eat a hamburger at the same time, but it seems more likely to be a decision made with commuter gaming in mind.) Which means it’s an endless, or rather auto runner – albeit nowhere near as limited as that implies.

Whereas traditional Mario games occupy multiple buttons and both hands at once – the left hand working the joypad on a Wii controller, for instance, and the right hand controlling one button for jumping and another for running, shooting fireballs and so on – this game only ever requires one button, and that’s jump. That button is most of the screen. 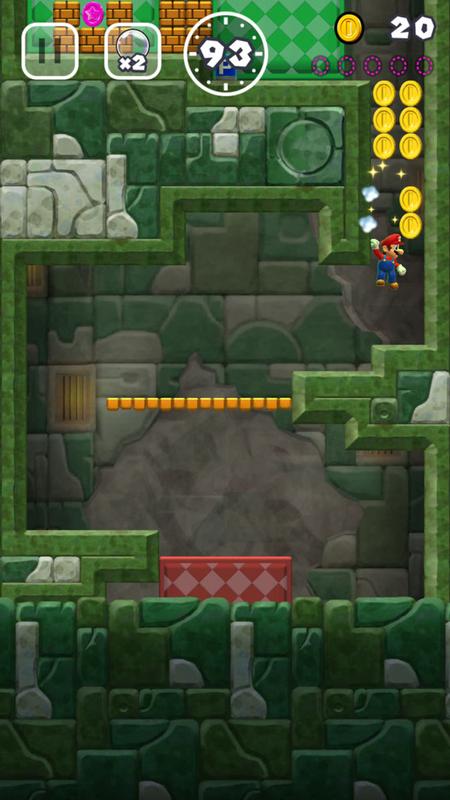 Mario is automatically and continuously – with some exceptions we’ll discuss in a moment – propelled at maximum velocity to the right, which instantly removes the need for a joypad, a run button and the rest. (There are no fire flowers in the game so there’s no need for a button for these; indeed, other than the size-up mushroom there are no power ups at all.) All you need to do is decide when to jump, and how high – a longer press produces a bigger jump.

This probably sounds a bit crap, barely a game at all. But the surprising thing about SMR is how full a game it feels, and how quickly you stop missing the old control method – that classic control method we had drilled into us back in the last millennium. Mario has lots of different jump and flip moves, depending on what he’s jumping off or the way you time it, including the ability to slide down vertical blocks and jump off in the opposite direction when you fancy.

The makers have worked hard to populate the game with other mechanisms for stalling, halting or reversing Mario’s progress: stop blocks, backflip blocks, doors on ghost levels, bubbles that take you backward, special wraparound levels where leaving the screen on the right brings you out on the left and your real aim is to progress vertically. 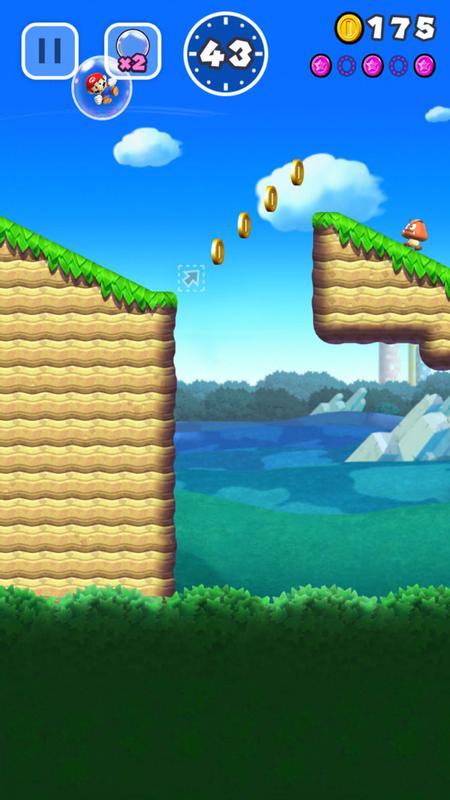 The backwards-drifting bubble appears the first two times you die on each level, although you can use up a bubble voluntarily if you miss something vital

If I mention that there’s a timer that kills you if it runs out, you’ll get an idea of how much control and responsibility you actually have over Mario’s forward progress. It’s a game about agency just as much as urgency. I think they’ve pitched it just right.

Indeed, at the same press event where I first tried out Super Mario Run, I also got to try out the (much more traditionally controlled, and very fun) Mario Maker on the 3DS, and it actually felt a little pedestrian in comparison: with no surging impetus to the right I was able to bimble about and think about everything, rather than the manic hurtling that Mario is all about at its best. Mario really, really works as an auto runner.

I say auto runner rather than endless runner because, in World Tour at least, these are proper levels with a beginning and end, complete with flagpole and little castle. There is a planned arc to each level; you’re not just running until you die, like in a Temple Run clone.

And that initial batch of levels, even though many of them seem fairly easy to complete, offer plenty of replayability. As well as the usual gold coins, there are five pink coins hidden on each level; get them all in a single run-through and you unlock a new version of the level with five purple coins, this time hidden in far more difficult places. Finish the level with all five of those and you unlock the black-coins level, the hardest of all. 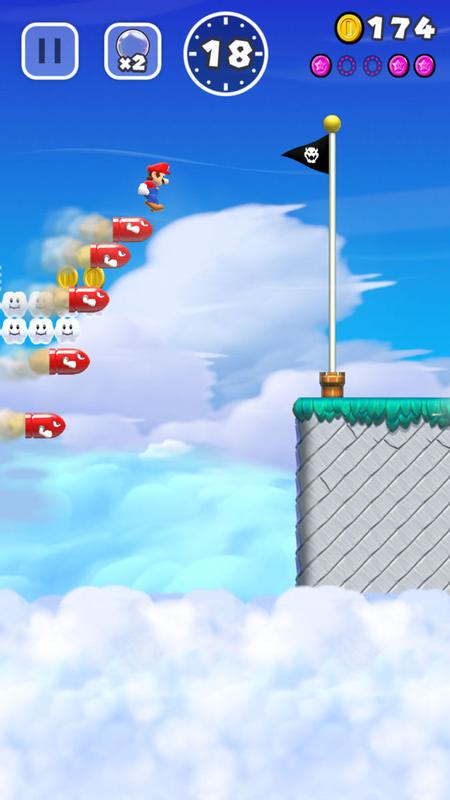 Unfortunately, the game requires an internet connection to play – even for the non-social, single-player World Tour Mode. This appears to be an anti-piracy measure. (Yep, piracy, that great scourge of the App Store.)

We tested this out for ourselves and, sure enough, whenever we turned on Airplane Mode, or went through a tunnel on our commuter train, or the office WiFi was just being spotty, we got an error message. If there isn’t a good connection you cannot start up the app; and if you’re in the level select screen and choose a new level, you won’t get anywhere. If you’re in the middle of a level and lose connection you’ll be allowed to finish the level, but at that point the error message will reappear, just before Mario gets his points. (In our experience you can generally die and retry a level several times with no connection. It’s when you try to do something else that it falls down.)

Clearly this is a concern. One of the great advantages of SMR’s single-button control method is the fact that you can play it easily while commuting, but this means a wide range of commuters – Tube passengers, and rail passengers going through a tunnel, and anyone travelling through an area with spotty 3G or using a WiFi-only iPad – are out of luck. A significant caveat now hangs over what would have been an enthusiastic recommendation of this game. 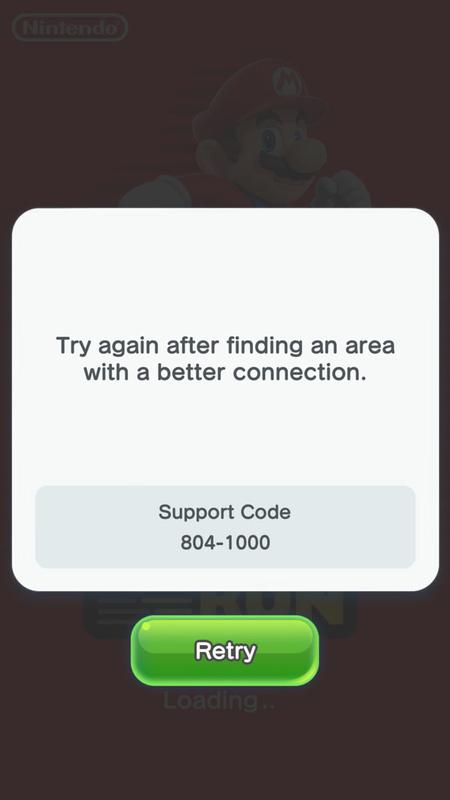 We’ve seen this error message a little too often

Super Mario Run launched on 15 December. The UK was one of the many initial launch countries, so you can download it from the British App Store here right now.

We talked about the game in our podcast. Listen here: 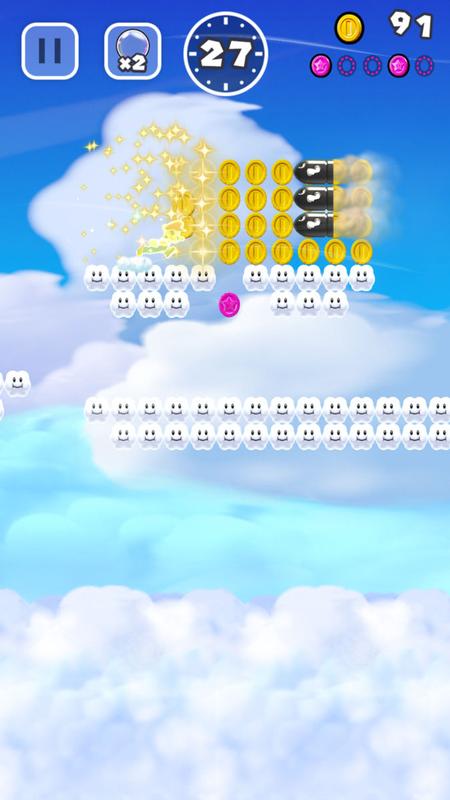 Super Mario Run is free to download on all compatible devices, but this is a limited version of the game that includes only the first three levels of World Tour (and a brief 20-second demo of the start of the fourth level, the first Bowzer’s castle level of the game) as well as the ability to participate – with obvious limitations because you can only play a few levels of World Tour – in the Toad Rally and Kingdom Builder modes.

To unlock the full game, you need to spend £7.99 on a single one-off in-app payment. 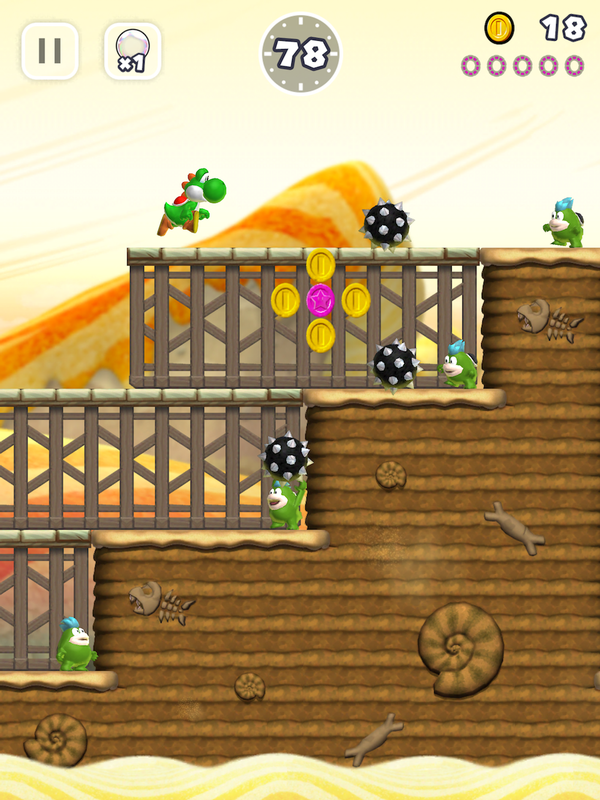