We’re impressed with Apple’s AirPods – sound quality is excellent, the auto play/pause function is great, the accuracy of the Siri controls is a pleasant surprise and call quality is impressive. Considering the small form factor of the earphones, the amount of tech inside is incredible. When looking at other wireless earphones on the market, it’s clear to see that Apple has succeeded where others have failed, and has succeeded in integrating true intelligence within its AirPods that provide a great listening experience. It’s not that expensive either, especially when you consider that competitors like Earin charge similar amounts for ‘dumb’ wireless earphones with no media controls, or even a built-in microphone.

Apple’s wireless AirPods, announced alongside the iPhone 7 and iPhone 7 Plus back in September 2016, finally hit the shops in December 2016 after a two-month delay. But are the wireless earbuds good enough to justify their lofty £159 price tag, and would we be happy to use them in our day-to-day life? Find out in our AirPods review.

Note: Apple has now (as of March 2019) announced the new version of AirPods which include upgrades like a wireless charging case and ‘Hey Siri’ support. Find out more about what are commonly known as AirPods 2.

The AirPods look like a traditional pair of Apple earbuds, except they cut off abruptly a couple of inches below the bud. It’s an odd look – they dangle down from your ears like weird futuristic earrings, or the detachable heads from an electric toothbrush – but having a protruding bit gives you something to tap on when you want to activate Siri. It’s an unusual look, but one we rather like.

The world seems to agree too, with a report showing that mere weeks after launch that the time of the AirPods’ launch saw the largest single day of headphone sales in 2016, beating Black Friday.

Of course, the first thing everybody asks about when they see the AirPods is the fit: do they actually stay in your ears? After all, the prospect of one dropping out and landing in the gutter is disheartening given that Apple charges £65 for a replacement bud. 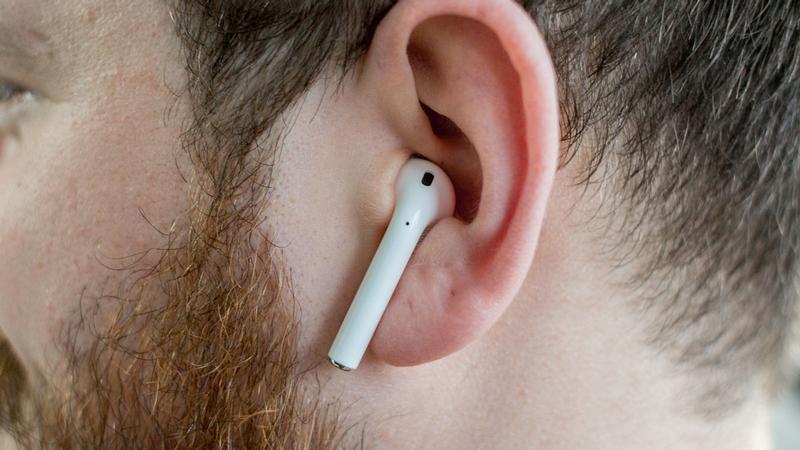 Your mileage may vary, but we – and most other reviewers – have found them pretty solid on this front. They stay in while running, jumping around listening to music, hitting ourselves on the head and so on. (Normal activities, in other words.)

However, while they haven’t actually fallen out of our ears, we’ve found that we have to adjust them every now and again because they tend to grow a little loose. This will vary from person to person, of course, as our ears come in all shapes and sizes, but Apple tried to find the best common fit without having to include a range of removable earbud tips.

The Apple AirPods are essentially the same in design as the wired EarPods, so it’d be a good idea to use those (if possible) for a few days before to decide whether the ‘fit’ is right for you.

Some people prefer a more secure, snug fit with memory foam tips while others want earphones that are easily removable – it’s personal choice. The AirPods are comfortable to wear and easy to remove, but could be a little more snug if we were to nitpick. 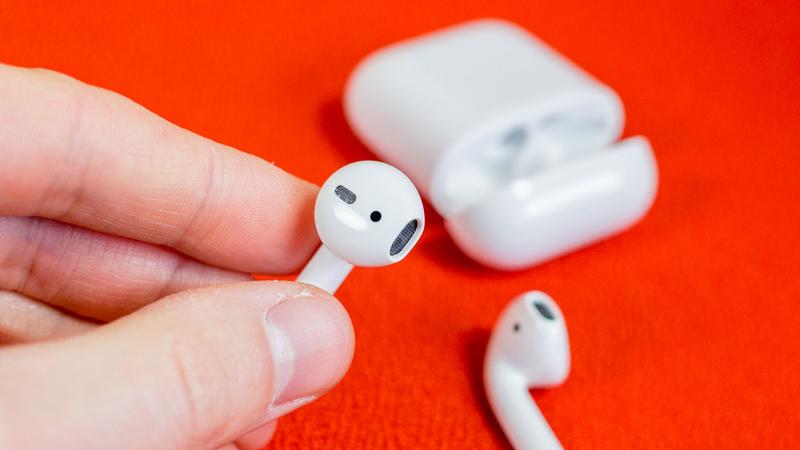 It’s also worth pointing out that there aren’t any physical media controls on the AirPods themselves, with consumers requiring the use of Siri (or the smartphone/source itself) to control playback – something we discuss in more detail below.

The AirPods, rather cleverly, come with a little charging case, which should extend their time away from the mains. They’re good for five hours themselves, but you can then pop them back into the case and they will top themselves up with quick-charging technology. According to Apple, the case itself offers around 24 hours of battery life before it’ll require charging.

A quick glance at the built-in LED will give you real-time feedback on the battery life of the AirPods, varying from green which indicates a (near to) full battery, to orange and finally red, which indicates that you’ll need to put them on charge sooner rather than later.

You can also glance at the Battery widget on your connected iOS device for a real-time update on the battery life of each individual earbud, as well as the case itself, allowing you to easily manage the battery life.

The charging case is small enough to fit in the small compartment of a jeans pocket, meaning it’s easy to have on you all the time – unlike some competitors.

And the best thing about it is that when you flip open the top of the case, a Bluetooth connection will automatically be initiated with your iPhone (assuming it has iOS 10 or later). It’s an almost instant connection when opening the carry case, but the audio output won’t change until it detects that it’s in-ear – good for phone calls and FaceTime, as well as listening to music.

This auto-pairing is really, really impressive and convenient, although it doesn’t work with iPads, and Apple declined to discuss why this is the case. 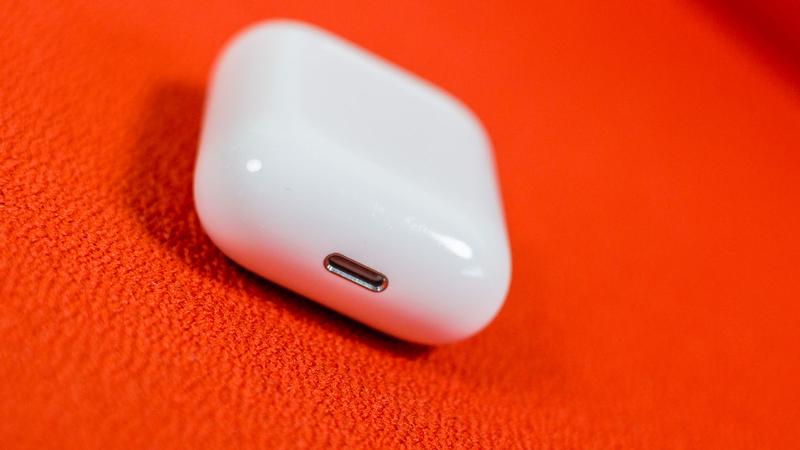 Once the AirPods have been connected to your phone for the first time, they should also automatically connect to any of your iOS devices running iOS 10 or Macs running macOS Sierra, thanks to iCloud syncing.

While Apple hasn’t reinvented the wheel with the introduction of AirPods, you can tell that the company has put a lot of thought into the smaller elements that provide a great all-round wireless headphone experience.

The AirPods offer a rather cool ability: they can automatically detect when the earphones are being taken out of your ears thanks to built-in optical sensors and motion accelerometers, and will pause your music accordingly.

This is a thoughtful bit of design: Apple realises that people may not realise you’re listening to music on wireless headphones, so has added this feature to make those conversations a little easier. Once the conversation is over, putting the earphones back into your ears will automatically resume music playback.

Don’t worry about phone calls though, as Apple won’t hang up on your call if you take an earphone out – the conversation will continue through the remaining earphone. But while we assumed that it’d be smart enough to realise when both earphones had been removed and reroute the call back to the iPhone itself, it wasn’t.

The auto pause/play functionality sounds cool in theory but is much more helpful than we first imagined, especially when in shops and bumping into somebody in the street. It seems, however, that if you take one earphone out for too long, the music won’t resume when you put it back in your ear.

You can activate Siri on your AirPods with a double tap (apart from that there are no buttons on the earphones). The lack of buttons makes Siri key to the equation: if you’re not comfortable using Siri to control your media playback and volume, you’ll still have to use your iPhone, which is a shame.

It’s also worth noting that using Siri requires an active internet connection, making it useless on the tube, on planes and other environments with low-to-no-signal.

The good news is that Siri on the AirPods has proved extremely accurate, unless you’re in a very noisy environment. While our requests started off rather basic (skip song, play our favourite Paul Potts cover, etc), the real charm of Siri is that it understands what you want incredibly well, so we were soon putting in rather complex quests (play the number one song in 2015 at 80 percent volume) without it even breaking a sweat.

We found ourselves using Siri more frequently over the weeks that we spent with the AirPods and we have to admit, we use Apple’s virtual assistant more via AirPods than on any other device – especially for music discovery.

It’s not just for music control though – you can Use Siri on AirPods to perform any Siri-related task. You could even get Siri to say silly things, if you wanted.

The inclusion of smart microphone technology within the AirPods means that in addition to use with Siri, users can also take phone calls on-the-fly (as briefly mentioned above).

We’ve traditionally steered away from using wireless headphones for calls as the microphones, generally speaking, aren’t that great and aren’t close enough to the mouth to pick up what we’re saying clearly. It’s not an enjoyable experience for us or the person at the other end of the call, but thankfully, that doesn’t happen with Apple’s AirPods.

We’ve tried calling people in a number of environments, from quiet roads to busy shopping centres and in cars, and for the most part, the recipient was unaware that we were using AirPods for the call. The call quality is similar to that provided by the iPhone unless you’re in an extremely loud environment, in which case the recipients could hear over-aggressive noise cancellation and compression.

So, essentially, unless you’re at a Beyoncé concert or on the Tube, calls taken via AirPods are great. 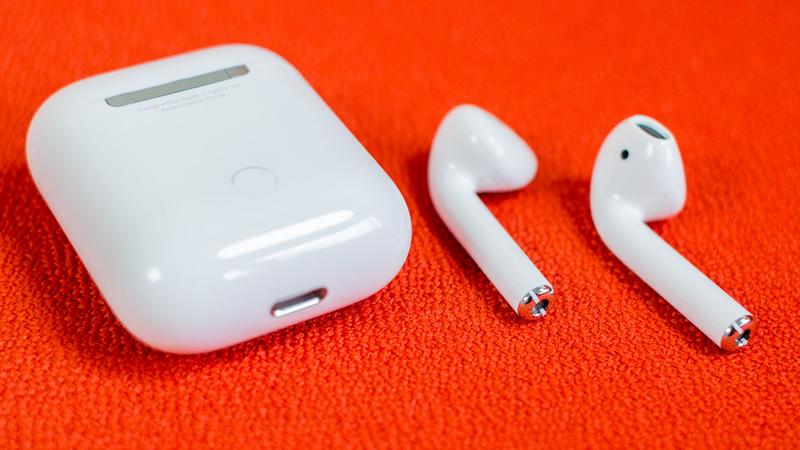 Here’s the million-pound question: do the AirPods sound good enough to justify that high price tag? In a word, yes.

The AirPods sound really good – as long as they’re in properly. You lose a bit of quality when they come loose, although that’s to be expected. While the earphones sounded slightly flat when we first got our hands on them, after using them for a few weeks (long enough for them to be ‘broken in’) they produced rich, balanced, warm tones and rather impressive levels of bass perfect for a wide range of music.

The AirPods are also the only Bluetooth headphones we’ve ever used that haven’t ‘dropped out’ over a wireless connection. While this should be expected with most high-end wireless headphones, even the Bose QC35s drop out every now and again, making it all the more impressive that Apple’s tiny wireless in-ears don’t.

It’s a small factor to consider, granted, but being hit with a few seconds of silence at your favourite part of the song you’re listening to is a rather frustrating experience – especially when it happens more than once.

Despite all its praises, it’s worth mentioning that there is zero noise cancellation. It wasn’t mentioned as a feature, granted, but if you were expecting it, be warned: you can almost always hear environmental noise, especially when in noisy environments like on the London Underground.

Apple’s AirPods cost £159 in the UK, and are now available to buy in the UK following a 19 December 2016 launch. You can buy them from Apple here and from John Lewis here. (Read our Best AirPods deals article for the latest offers.) 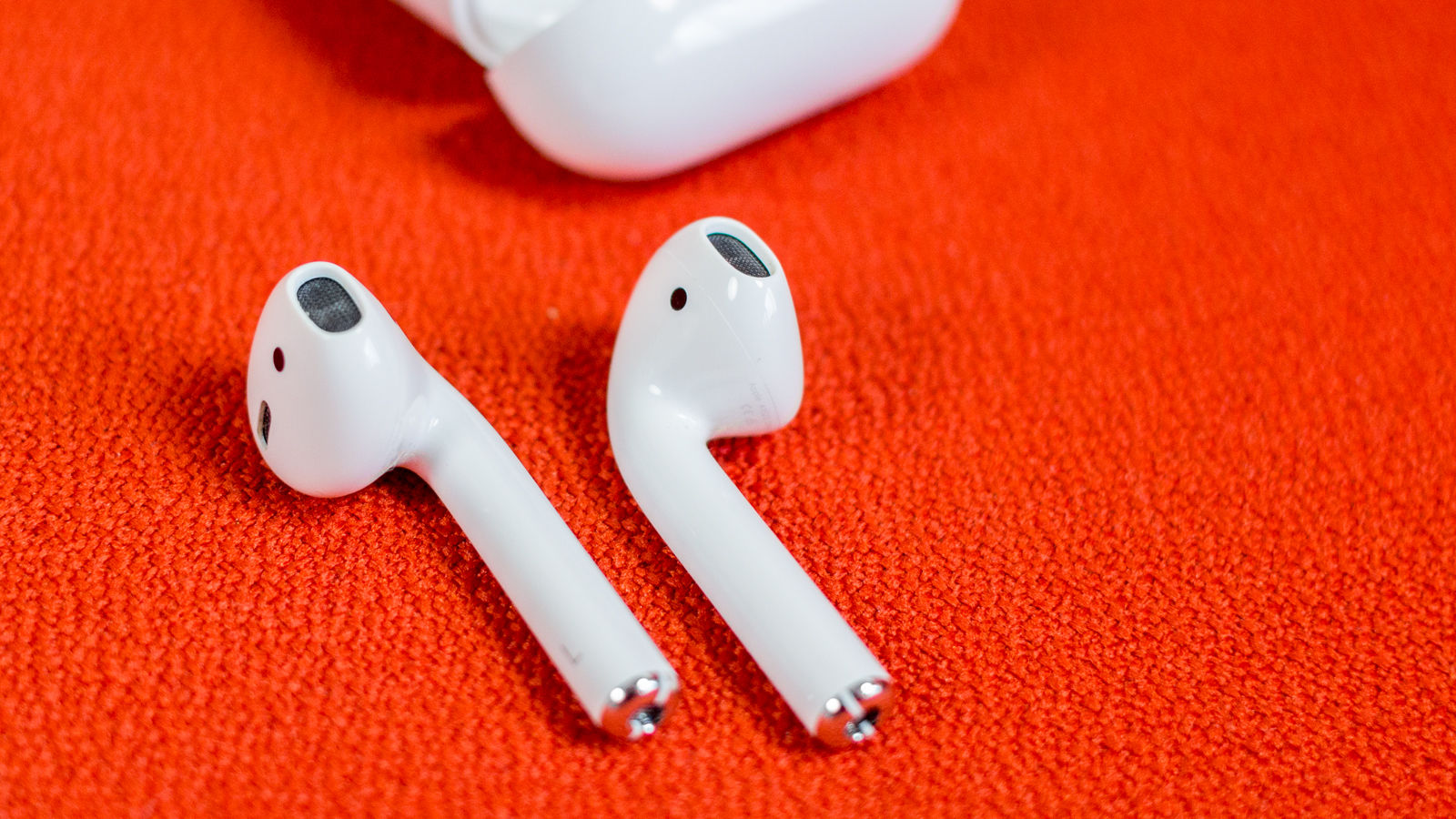 Apple is expected to launch new AirPods in 2018. The AirPods 2 could launch in conjunction with Apple’s rumoured StudioPods, over-ear headphones the company is said to have in the pipeline.