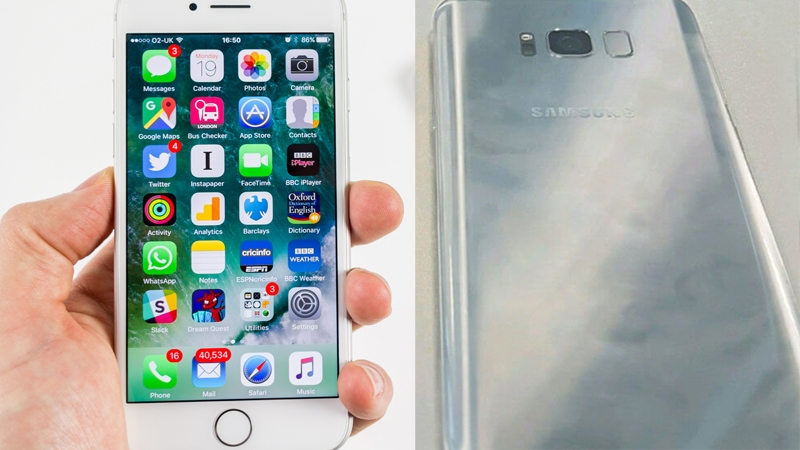 The S8 is a stunning device with a magnificent screen; it seems fast in use, too. But until we’ve had some serious hands-time in our testing lab, it’s too early to give our verdict. Check back for a full review once we’ve put Samsung’s next flagship smartphone through its paces alongside the iPhone 7.

Which is the best new smartphone: the iPhone 7, or the Samsung Galaxy S8?

We now know, having listened to Apple’s Q1 2017 financial results, that the iPhone 7 launch went well. Some of the reviews were negative, focusing on how much it had in common with the previous two generations of iPhone and the annoyance of losing the headphone port, but the actual customers voted with their wallets and gave Apple a record quarter for iPhone revenue.

But attention spans are short in the tech sector, and smartphone fans have since moved on to the next big flagship phone launch: the Samsung Galaxy S8, which was unveiled at a special press event on 29 March and goes on sale in April 2017. We’ve put together a comparison of the two smartphones to help you decide whether to buy an iPhone 7 or pre-order the Galaxy S8. For a more up-to-date comparison, see iPhone 8 vs Samsung Galaxy S8.

The iPhone is smaller than the Galaxy S8, although this is to be expected given the S8’s larger screen. And it’s not a huge difference: a little over 10mm in length, 1mm in width and 0.9mm in thickness. The iPhone is 14g lighter. 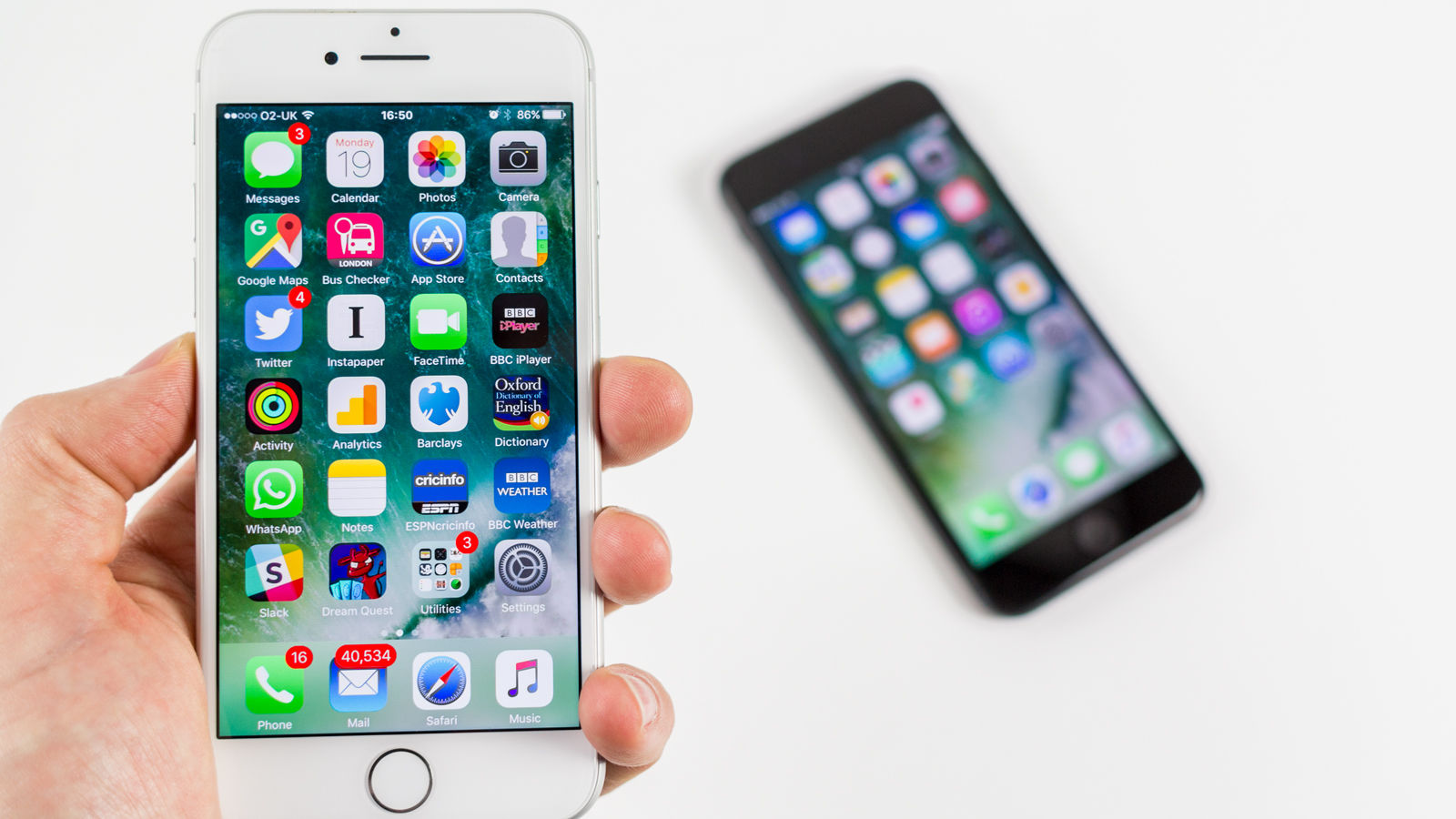 Design is a subjective matter, so here are some photos of the two devices to help you decide which you like more. First the Samsung Galaxy S8: 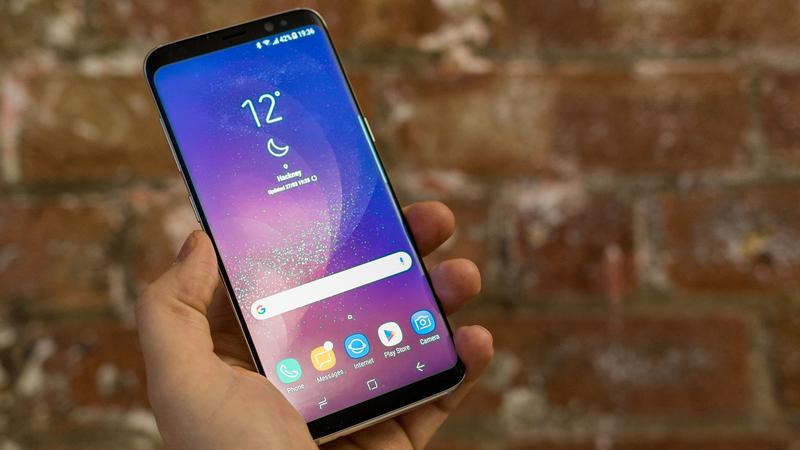 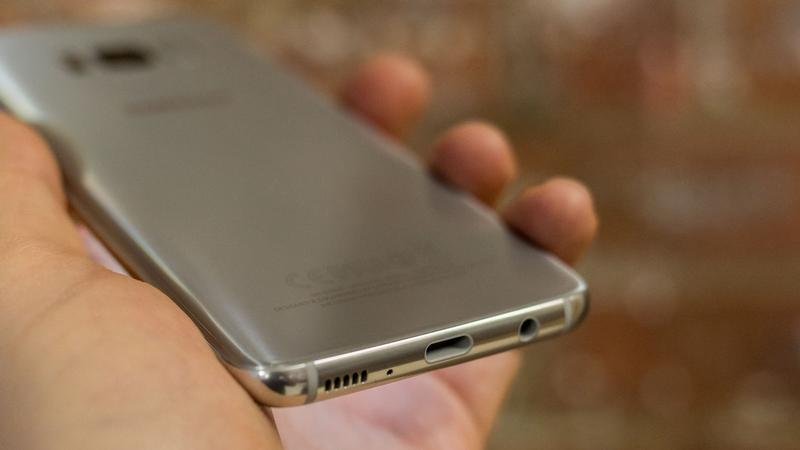 And now the iPhone 7: 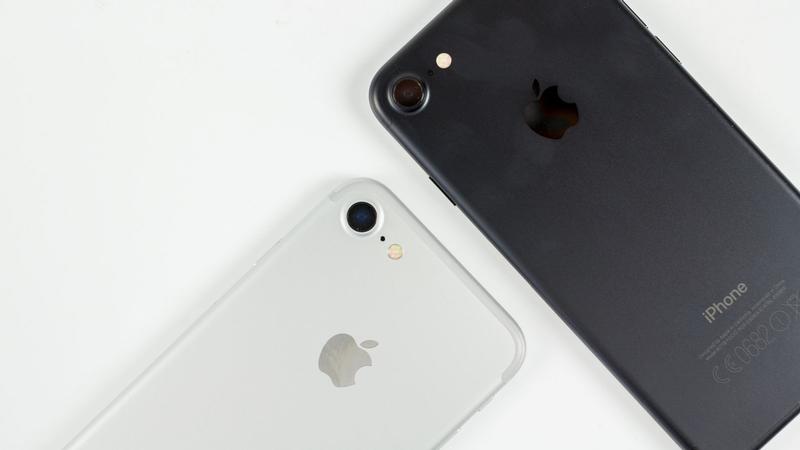 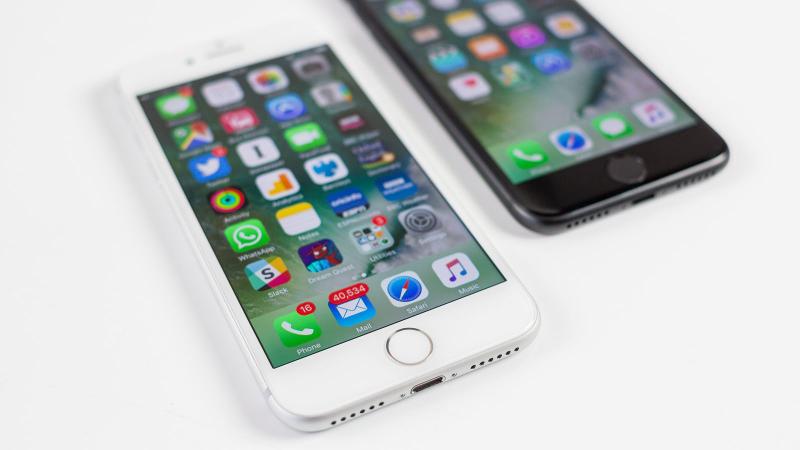 You get a bit more choice colour-wise if you go for the iPhone 7. As well as the black, Jet Black, silver, gold and Rose Gold available at launch, Apple has since announced a Product Red version of the phone that looks rather handsome. (Although some people wish this option came with a black front plate.) 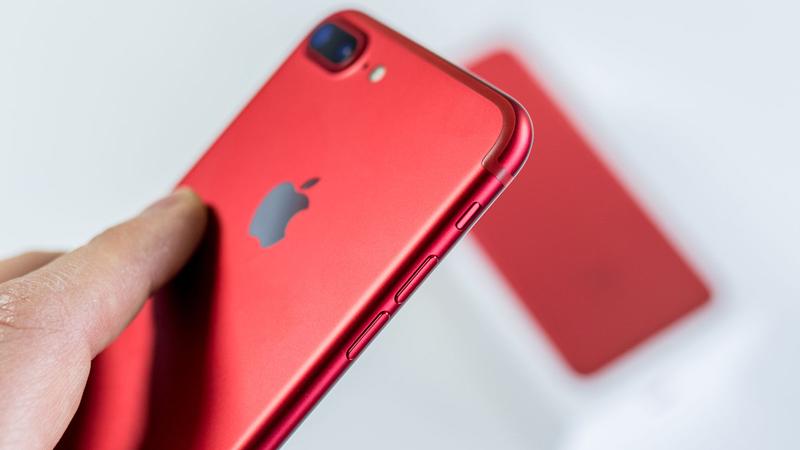 The S8 does come in five colours but in the UK we are offered only two at launch: Midnight Black and Orchid Gray. Arctic Silver is supposed to be with us soon. 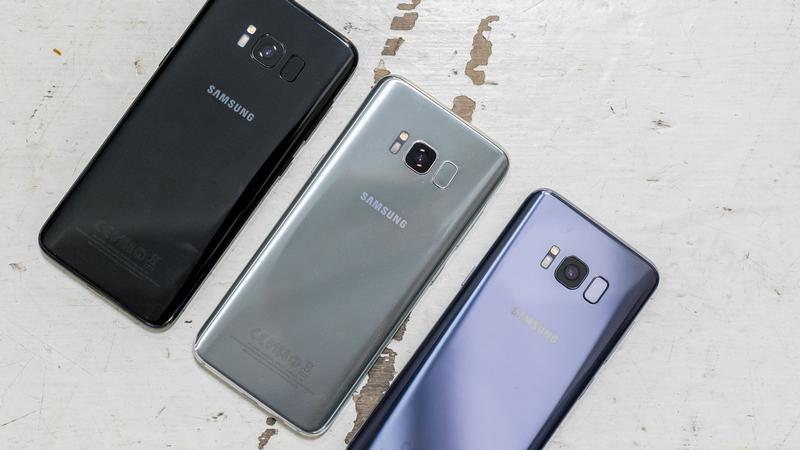 A few highlights to pick out:

Home button: The iPhone 7 has a separate Home button embedded in a bezel at the bottom of its screen; this obviously forces the designers to include an otherwise non-functional section of chassis that increases the phone’s size without increasing its screen size.

The S8 features an integrated Home button, allowing Samsung to remove the bottom bezel. The S8 curved edge-to-edge screen makes the most of the available space.

AI assistants: The iPhone gets Siri, a solid and constantly improving voice-based assistant that is nevertheless not exactly at the cutting edge of AI. Samsung has unveiled Bixby, which appears to be the company’s take on the more ambitious Google Assistant type of helper; we haven’t had much of a chance to try it out yet.

Headphone port: Apple left the headphone jack out of the iPhone 7 and called the decision “courage”. To be fair, it did take a fair bit of flak for the move and must have known it would. And also to be fair, the iPhone 7 comes with a pair of Lightning headphones and an adaptor so you can use older headphones with it. 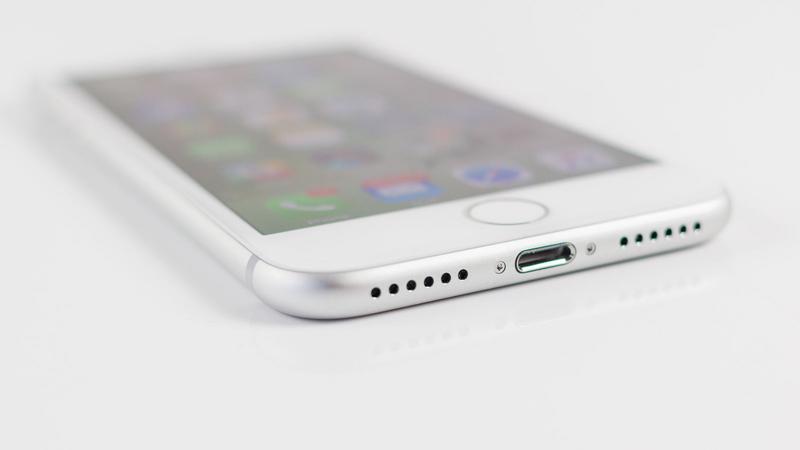 The S8 includes a headphone port, which many potential buyers will view as good news (even though we don’t think it’s that big a deal).

Waterproofing: Apple has historically been behind its smartphone rivals when it comes to waterproofing, but the iPhone 7 is rated IP67 – the most waterproof iPhone yet. The S8 goes one better with an IP68 rating, but both devices should be fine with the occasional accidental dip.

Battery: Not so much a feature as a key talking point. Samsung is a highly successful and popular smartphone maker, but is currently working to recover the reputational damage from a number of Galaxy Note 7 models bursting into flames, and the muddled way the company handled the situation. It appears that the problem was caused by the battery in the Note 7.

Read more: What to do if you’ve got a Samsung Galaxy Note 7

The S8’s battery specs therefore face careful scrutiny (it’s believed that overambitious specs made the Note 7 battery prone to overhearing – trying to cram in too much capacity in too small a unit), which may explain it featuring a lower capacity than expected: 3,000mAh for the S8, same as on the  S7. (And 3,500mAh for the Plus model.)

These numbers are still much higher than are provided by Apple. The iPhone 7 has a 1,960mAh unit, with the 7 Plus rated at 2,900 mAh. Battery life isn’t as bad as this suggests, however, because of the greater optimisation between the iPhone hardware and the iOS software and the lower-res screens.

We don’t think UK buyers will get the Snapdragon 835 processor: we’ve been told that the S8 will have an octa-core processor with clock speeds of 2.3 and 1.7GHz (four cores each), which doesn’t match up with the 835’s specs.

The Snapdragon 835, a collaboration between Samsung and Qualcomm, is the first Qualcomm processor to be made with a 10nm process, which will bring various improvements including performance (up to 27 percent higher) and efficiency (up to 40 percent lower power consumption) and lead to better battery life for devices.

But even with what we think is an Exynos 9 8895 the S8 seemed very smooth and fast in hands-on testing. We’ll do speed benchmarks when we have more time with a review sample.

The iPhone runs iOS, and comes with iOS 10 preinstalled. It’s a secure and user-friendly OS, albeit one that is harder to customise than the main alternative, Android.

The Galaxy S8 comes with Android 7.0 Nougat, with Samsung’s usual customisations. Samsung has also confirmed that it will integrate Viv’s AI assistant in “Galaxy smartphones and expand voice-assistant services to home appliances and wearable technology devices”, starting with the Galaxy S8. 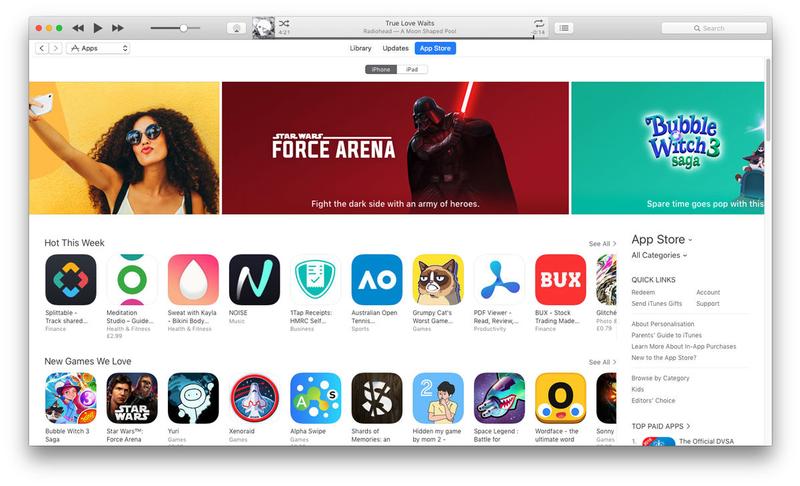 Both iOS and Android allow for the installing of a huge range of third-party apps, in Android’s case from the Google Play store and for iOS users from the App Store. Google Play has more quantity, while the App Store has more quality, but really there’s not much in it: both have far more apps than any one person could use in a lifetime, and most apps of consequence will appear on both platforms, it just might come to iOS first.

For in-depth analysis of the strengths and weaknesses of iOS and Android, see our iPhone vs Android article.

The iPhone 7 is a costly device. Here are its UK prices:

You can buy the iPhone 7 from Apple’s website. Alternatively, here are the best iPhone deals in the UK.

The iPhone 7 launched in the UK in September 2016 and as mentioned above can be bought from Apple’s website.

The Samsung Galaxy S8 launched at a Samsung Unpacked event on 29 March, and pre-orders opened immediately; if you get your order in by 19 April your Galaxy S8 will delivered on 20 April. Pre-orders will close at this point. The official release date is 28 April.