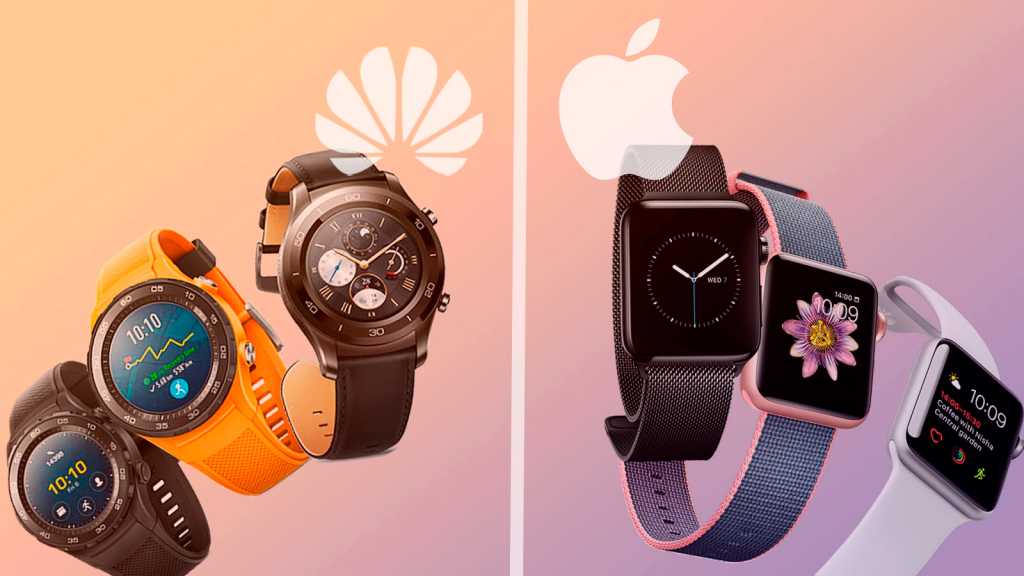 The Huawei Watch is cheaper, but in many ways it should be as it lacks the style and sophistication of the Apple Watch. However, perhaps the addition of 4G makes up for all the other failings. In nearly every way that we feel counts, the Apple Watch 2 is better than the Huawei Watch 2, but we are frustrated that it offers 4G while the Apple Watch isn’t likely to do so until much later this year. Until the Apple Watch offers 4G it’s going to find it increasingly hard to compete in the Android smartwatch market. Hopefully this is something it will rectify soon.

Huawei announced the Huawei Watch 2 on 26 March 2017 and while it’s still early days we do have some information about the new features so in this article we are comparing it to the Apple Watch 2 in an attempt to gage just how much of a so called Apple Watch-killer Huawei’s latest offering will shape up to be.

The most obvious difference between the two watches is the shape of the face. Like the original Apple Watch, the Apple Watch 2 has a rectangular face, while the Huawei offering is round, like so many of the new Android smartwatch offerings.

The battle between Apple and the Android offerings is as much a question of shape preference as it is operating system. Some people just prefer the traditional round watch face and they will be drawn to the Android offerings like this one from Huawei. However, we have always thought that because it has a rectangular face, the Apple Watch is able to make good use of space for the interface. We feel squeezing the interface into a circle cuts off the corners and forces the controls into a smaller space than they would be otherwise. For example, when you view a photo on the Apple Watch you do so on the whole screen, it’s not forced into a small rectangular window inside the round face. Of course viewing photos on your watch may not be important to you, so this may not matter, but given that the smartwatch is a watch second and a smart device first, we tend to see the circular face as a limitation and for that reason we prefer the Apple Watch 2 to the Huawei Watch 2.

Another factor in favour of the Apple Watch: it comes in two sizes, a 42mm version and a 38mm version better suited to smaller wrists. There is only one size of Huawei Watch 2 and it is a rather large 45mm – so rather bulky if you have been blessed with slender wrists.

The dimensions are as follows:

As you can see the Huawei offering is a smidgen thicker too, although we doubt that you will really notice just over a millimetre of extra depth.

However, it would be wrong to discredit the Huawei offering over something so basic, there are a number of other interesting features that model has that Apple’s Watch doesn’t offer and we will look in more detail at those below.

Where the original Huawei Watch was trying to be stylish, this time round the company has gone for a sporty look to suit customers more interested in exercise and fitness. Perhaps this indicates that the smartwatch market is still very biased. towards keep-fit?

The sporty Huawei Watch 2 is plastic and comes in a variety of different finishes: Dynamic Orange, Carbon Black, and Concrete Grey. It features a plastic Sport Strap. If you are less interested in sports, there is the Huawei Watch 2 Classic model in Titanium Grey with a leather strap (actually leather on top and rubber underneath to protect against sweat damage).

There are so many combinations of Apple Watch and Watch Strap that it would probably be a waste of time to count them all, suffice to say, there is a case and a strap to suit most tastes. Of course the main limitation here is price, with some of the nicest options being prohibitively expensive, but there is certainly choice, with aluminium, steal, and the new ceramic finishes along with the various straps including the traditional plastic sports bands and the new Nike Sports Bands, woven nylon straps, classic buckles, Milanese loops and link bracelets, and fashionable leather offerings including some from Hermes.

A significant aspect of the look and feel of your smartwatch is the screen. Is it impossible to see the detail in bright light? Is is easily smashed when you bash it against the door frame for the umpteenth time?

The Apple Watch 2’s Retina display features a brighter screen than that of the original Watch, now 1000 nits brightness up from 450 nits. Screen resolution is the same as before (the 38mm Apple Watch offers 272 x 340, while the 42mm Apple Watch is 312 x 390) but we think it looks sharper than it did. It’s an OLED display made from Ion-X strengthened glass in the sports variants or stronger sapphire glass screens for the other models. The Apple Watch screens offer Force Touch, a nifty feature that means pressing the screen slightly more firmly will perform a different function to pressing it normally. Force Touch is a way of increasing the functions available given that the screen is so small – although it has to be said we get confused about whether to swipe, press, or twiddle the Crown most of the time with the Watch interface not being as straightforward as that of the iPhone.

The screen of the Huawei Watch 2 is a letdown, the Apple Watch 2 wins this category.

The Apple Watch 2 features the S2, which is a “System in Package” that incorporates all the components including Wi-Fi, Bluetooth, GPS, NFC, touch controller, accelerometers, RAM and a dual-core processor onto the one chip.  Apple claims that compared to the the original Apple Watch, the two cores in the S2 deliver 50 percent higher performance. The GPU is also faster than before.

Here we are more interested in how the S2 compares to the Qualcomm Snapdragon Wear 2100 found in the Huawei Watch 2. The Snapdragon Wear 2100 is the first Qualcomm processor to have been designed specifically for wearables (pervious generations of the chips were meant for smartphones). As a result it’s It’s optimised for power and efficiency and because it is designed with smartwatches in mind care has been taken to slim it down so that watches don’t have to be so chunky. Unfortunately the Huawei is still a little on the chunky side, but there are likely to be improvements compared to the previous generation such as better battery life thanks to power savings.

Until we can properly test the new Huawei watch we can only speculate about how it will compare to the Apple Watch. There is one area where the Snapdragon Wear 2100 definitely has the upper hand though – it paves the way for perhaps the biggest deal of all – 4G connectivity.

This is one area where the Apple Watch can’t compete. Most models of the Huawei Watch 2 will be access the 4G network without needing to piggy back a mobile phone. This means you can can strap your Huawei Watch 2 to your wrist when you go out jogging and make and receive calls without having to keep your smartphone in your pocket.

So here at least things are neck and neck between the two phones, although we haven’t yet been able to check just how good the Huawei is at tracking where we have run – the Apple Watch 2 did a great job at that.

The more power efficient processors in both watches should make better battery life possible. Here’s how they compare, according to the manufacturers.

Apple claims that the Watch 2 has a battery life of up to 18 hours, although in our tests we saw two days of use between charges. It’s a 273mAh battery compared to the 420mAh battery in the Huawei.

Huawei claims that the 4G version of its Watch 2 will last for two days on a single charge, while the non-4G variant will last an extra day with a three-day battery life. That’s assuming average use (if you were tracking a workout constantly you could do so for 11 hours). If you only used the Huawei in watch mode you could get 25 days use from it without a charge. Huawei claims the battery can go from empty to fully charged in an hour.

Huawei Watch 2 features 2GB of onboard storage for storing music. There is also 768MB RAM.

The Apple Watch 2 offers 8GB of storage for photos and music, but its limited to 2GB of music and 75MB of photos so most of that storage is used for the watchOS. It features 512MB RAM.

It seems like the Huawei has the edge here with more RAM, although the need for extra RAM is usually symptomatic of issues with the operating system, so it isn’t necessarily a deal breaker.

There are a number of other comparable features. Both watches have a heart rate sensor for monitoring your heart rate during exercise, both offer NFC for wireless payments (Android and Apple Pay).

Only Apple has a Digital Crown on the side of the watch for interface control. The Huawei watch doesn’t feature a crown (unlike many competing Android watches) and this means that it can’t take advantage of the Android Wear 2 scrolling interface. Instead you have to use your finger to scroll up and down.

The lack of Digital Crown does seem to hamper the Huawei watch.

In terms of water resistance, the Apple Watch 2 improves on the original Apple Watch which was water-resistant to a depth of 1 metre for 30 minutes. The new Apple Watch can go 50 meters under, although Apple doesn’t recommend taking it scuba diving. There is a new swimming option in the Workout app to take advantage if this new feature, and a new Water Lock feature stops the touchscreen being activated underwater.

Like the original Apple Watch, the Huawei Watch 2 has a water rating that indicates it should be ok at depths of 1.5m for 30 minutes, but Huawei isn’t recommending you take the watch swimming (and nor did Apple when it launched its first Watch).

The Apple Watch runs WatchOS 3 and ships with a range of pre-installed apps, most of which are fitness focused. There’s also the App Store with many watch versions of popular iOS apps.

The Huawei Watch 2 runs Android Wear 2.0 and features the Huawei Wear app for creating custom workout plans. As with Apple, there is a built-in app store.

Both watches offer voice controls, in the case of the Huawei there is Google Assistant support while Apple’s watch integrates Siri.

At the end of the day the decision is really between operating systems and which one you have already committed to with your phone. If you have an Android phone chances you really need to chose an Android watch. If you don’t own an iPhone you won’t be able to connect to the internet via an Apple Watch because it gets all of its data connections and GPS signals from the iPhone and most of the third-party apps available for Apple Watch rely on the iPhone for its data connection.

On the other hand, there are lots of Android-powered watches that do work with the iPhone. According to Google, the Huawei Watch 1 worked with the iPhone so we would expect that the new Huawei Watch will too. There is an Android Wear app available on the iOS App Store, you just need to install that on your iPhone and you can pair your Android watch.

As much as we prefer the Apple Watch OS the fact that you can use the Huawei with an Android phone or an iPhone has to be seen as a bonus.