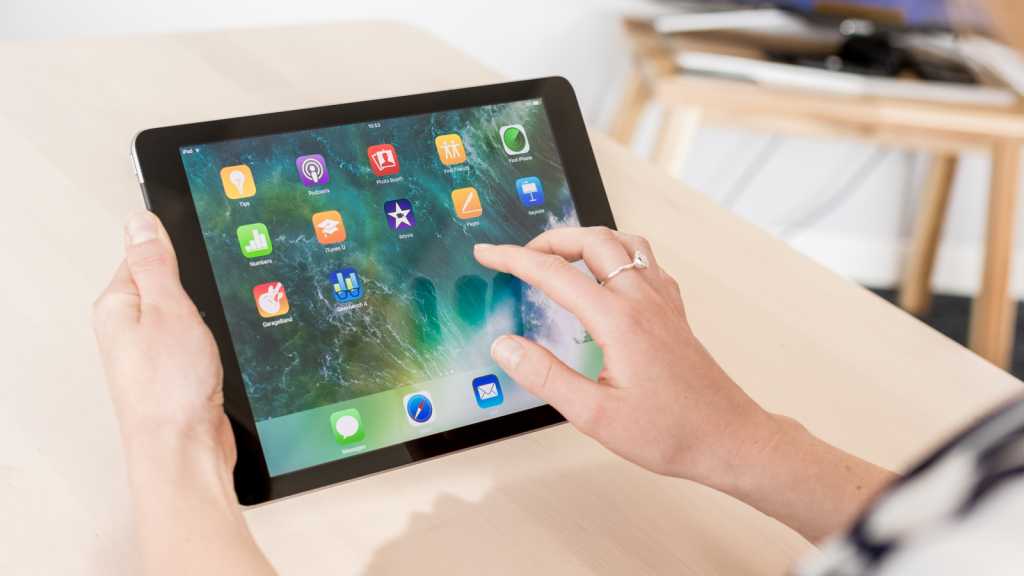 It’s a tough decision, and one that should be influenced mainly by what you’ll use the tablet for. If, for example, you’ll be using it to watch movies or take photos, you may want to go for the Tab S3 with its Super AMOLED display and 13Mp rear-facing camera. However, for those that want a high-performing tablet that runs iOS with access to Siri and iCloud without spending over £500, the iPad is a great option.

Is Apple’s £339 iPad good enough to compete with the likes of the £599 Samsung Galaxy Tab S3? While the Galaxy Tab S3 has had a warm welcome in the UK with its Super AMOLED display and 6mm thick body, Apple’s iPad has a couple of tricks up its sleeve. Here, we breakdown the differences between the 2017 iPad and Samsung Galaxy Tab S3 to help you decide which is best.

Interested in buying an iPad, but not sure which is right for you? Take a look at our iPad buying guide.

Apple’s new iPad, the successor to the iPad Air 2, was announced and released in March 2017. Before we go any further, this year’s iPad isn’t related to the ‘Pro’ iPad series that Apple launched back in 2016, and the pricing reflects this. In terms of Wi-Fi only models, interested users can pick up a 32GB iPad for £339, or can splash out £429 for the 128GB variant – both are available from the Apple Store.

What about Samsung’s Galaxy Tab S3, you ask? It’s safe to say that it’s the more expensive option, setting potential users back £599 from the likes of Currys PC World following a March 2017 reveal.

That’s enough to buy the iPad with 128GB of storage and still have change left over. Is it worth the extra £140? We’ll let you decide once we break down the specs of the two 2017 tablets.

The design of Apple’s iPad has remained largely unchanged for years, offering the same aluminium unibody with curved edges for improved ergonomics and a bright, high-resolution 9.7in display. It measures in at a 240 x 169.5 x 7.5 mm and weighs 469g, making it thicker and heavier than not only the ultra-sleek Galaxy Tab S3 but also its predecessor, the iPad Air 2.

Samsung’s Galaxy Tab S3 is inspired by the company’s smartphone design and much like this year’s Samsung Galaxy S8, the Tab S3 features an all-glass back. It’s sleek and stylish if not a bit of a fingerprint magnet, and manages to be smaller, thinner and lighter than Apple’s iPad at 237.3 x 169 x 6 mm and 429g. 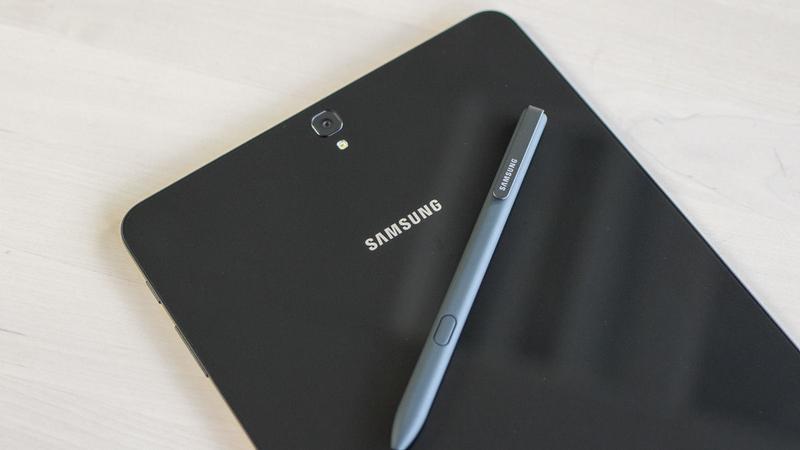 Both the iPad and Galaxy Tab S3 feature physical Home buttons on the front of the devices, and each feature a fingerprint scanner for security-related purposes. While the iPad only has a single Home button, the Galaxy Tab S3 features two additional touch capacitive buttons, allowing Android users to go back a single step or quickly access the multitasking window. You can also access the multitasking menu on the iPad by double-clicking the Home button.

That’s not the only similarity between the two 9.7in tablets either: both the iPad and Galaxy Tab S3 feature four stereo speakers, two at the top and two at the bottom of the display. Both should provide clear, crisp stereo sound, although Samsung has a trick up its sleeve. While Apple’s speakers were developed in-house, Samsung’s Galaxy Tab S3 speakers were tuned by HARMAN.

Read next: Special edition (Product) RED iPhone 7 Plus in pictures

It’s when you look beyond the design of the two flagship 2017 tablets that the differences start to appear.

For starters, the display technology is different: while both the iPad and Galaxy Tab S3 offer the same 1536 x 2048 resolution, equating to around 264ppi, Apple opted for the cheaper IPS LED display while Samsung decided to offer a Super AMOLED display.

The use of Super AMOLED technology means that Samsung’s display can offer more vivid colours and deeper blacks than Apple’s iPad, although the iPad display isn’t to be sniffed at. 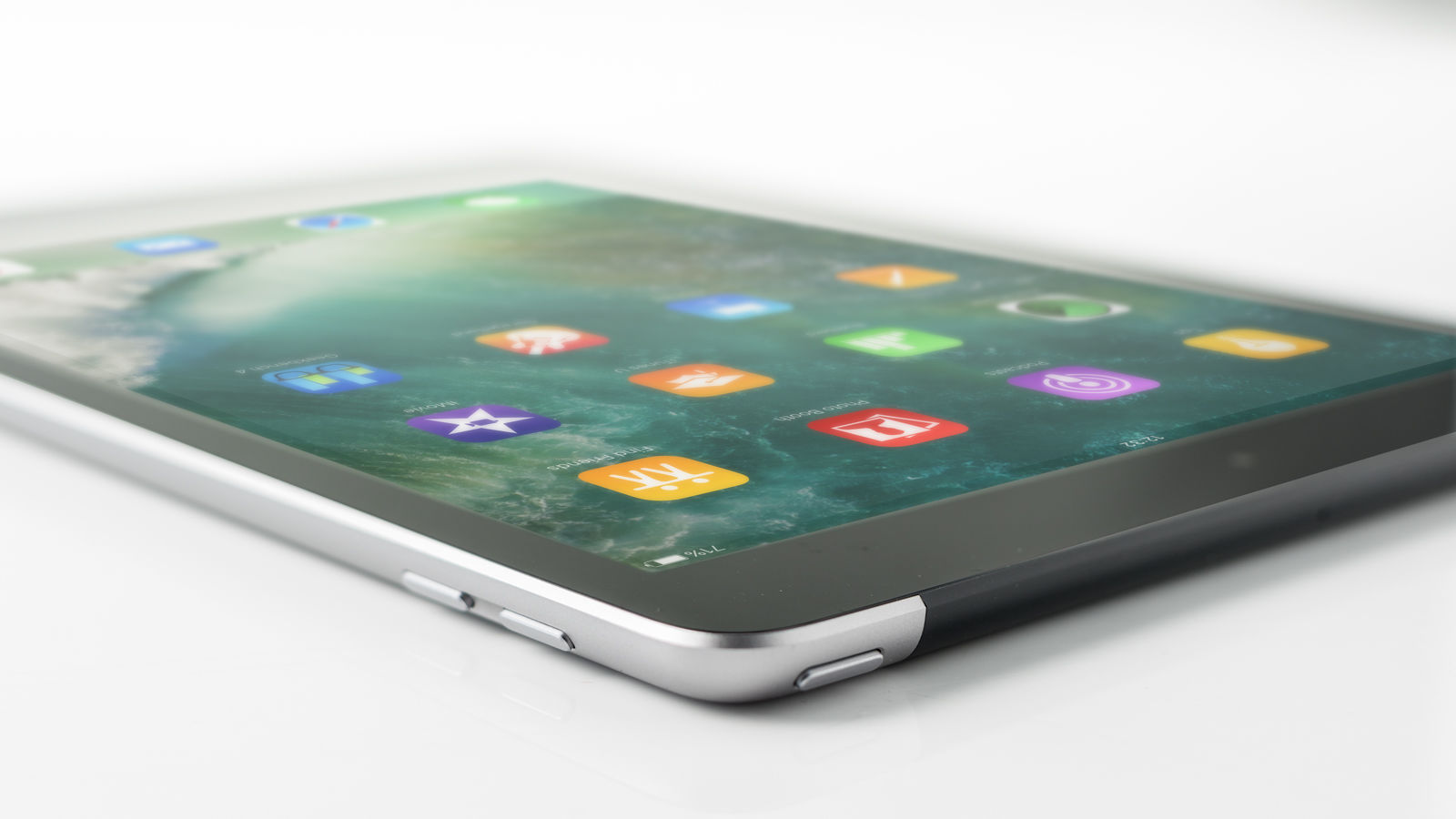 However, in terms of performance, it’s a different story. Apple’s 2017 iPad doesn’t feature the same high-end A9X chipset as the iPad Pro, or the A10 Fusion chipset featured in the iPhone 7. Instead, the iPad features the dual-core A9 chip that was first introduced back in 2015 as part of Apple’s then flagship iPhone 6s, along with 2GB of RAM.

In Geekbench 4 benchmark tests, the iPad scored 2359 in single-core mode and 4340 in multi-core mode compared to 1731 and 3961 of Samsung’s Galaxy Tab S3. With that being said, both the iPad and Galaxy Tab S3 should offer more than enough power to run intensive apps and offer the ability to use two apps side-by-side at the same time. 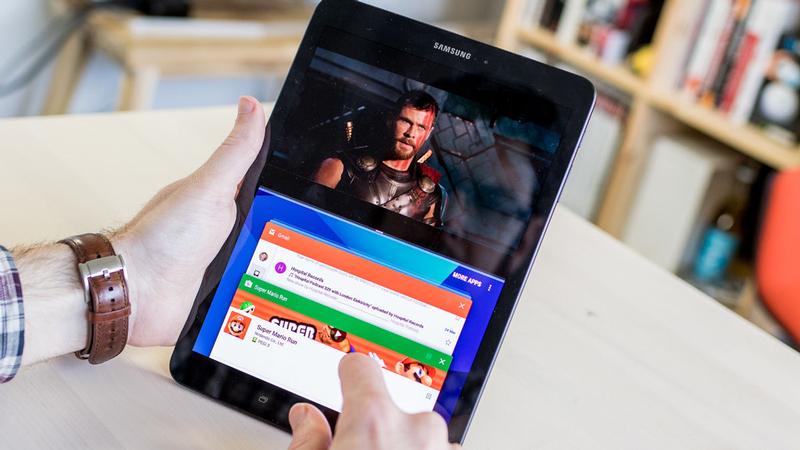 Storage is another important area to consider, with Apple and Samsung taking two different approaches. Apple offers the 2017 iPad in two storage options: 32GB and 128GB, allowing users to opt for the cheaper option if they don’t require a lot of storage. However, as the company offers two storage solutions, Apple didn’t feel the need to offer a microSD card slot to expand storage if required (this is nothing new though!).

Samsung, on the other hand, offers the Galaxy Tab S3 in only a single storage option: 32GB. While it might seem expensive (especially considering the 128GB iPad is cheaper than the 32GB Tab S3), Samsung’s tablet features a built-in microSD card slot that can expand storage on the device by up to 256GB if required.

So, while Apple may win in terms of base storage, the Samsung Galaxy Tab S3 can offer more overall storage – as long you’re happy to pay extra for it.

Samsung also offers a free S Pen along with all orders of the Galaxy Tab S3, offering pressure-sensitive stylus interaction. That makes it easy to draw and shade using the stylus, along with writing and annotating in a more natural fashion. The one drawback? Unlike with Samsung’s Note series, the S Pen isn’t built into the tablet and it offers nowhere to keep it safe. 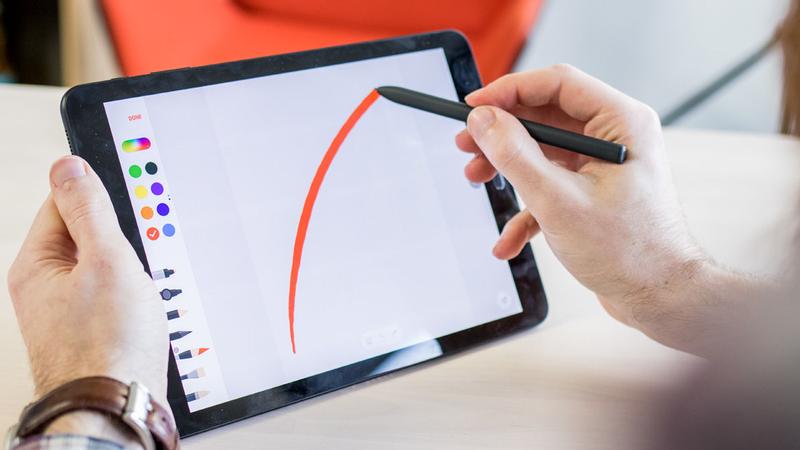 While it’s an inconvenience, at least Samsung users have the option of using a pressure-sensitive stylus, which is more than can be said for Apple users. Why? Despite offering support for both models of iPad Pro, the Apple Pencil is incompatible with the 2017 iPad.

While the features of the two tablets are similar in most respects, the camera department is one area where that isn’t true. Apple’s 2017 iPad offers a rear-facing 8Mp camera with an aperture of f/2.4 and 1.12µm pixels that produce decent quality photos, and a front-facing 1.2Mp camera that’ll suffice for FaceTime and Skype, but not much else. In terms of video, the iPad can capture 1080p@30fps and 720p@120fps on the rear-facing camera, but only 720p@30fps on the front-facing camera. 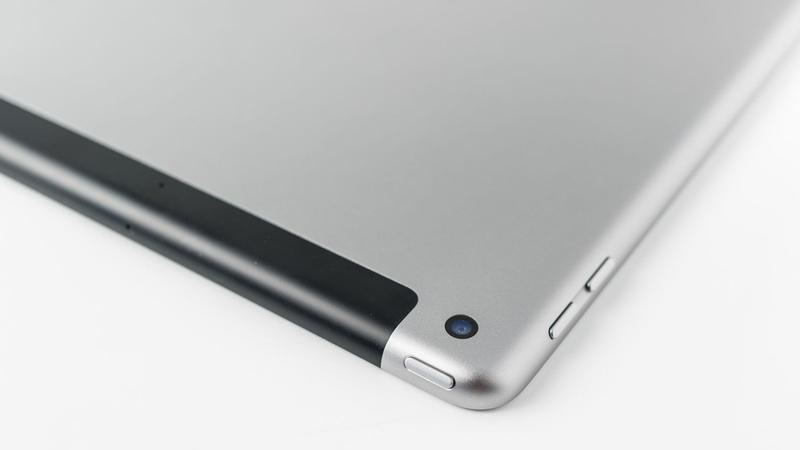 It can’t quite compete with the Galaxy Tab S3, which features a 13Mp rear facing camera with improved aperture (f/1.9) for better low-light photography and an LED flash for when that isn’t enough. It also features a higher quality 5Mp front-facing camera with f/2.2 aperture and is also capable of recording at 1080p@30fps, while the rear-facing camera can offer 2160p@30fps.

Both tablets offer similar options in terms of connectivity, featuring Wi-Fi 802.11 a/b/g/n/ac, Bluetooth 4.2 and GPS. The only real difference is in terms of the physical ports as Apple’s iPad uses the company’s Lightning port while Samsung decided to follow suit of other Android manufacturers and offer USB-C on the Galaxy Tab S3.

The Tab S3 also offers a magnetic connector similar to that of the iPad Pro for use with Tab S3-compatible keyboards that don’t rely on Bluetooth technology. Apple’s iPad, on the other hand, doesn’t feature the ‘Smart Connector’ and relies on wireless technology for communication with iPad accessories.

Read next: Best wireless headphones of 2017

You shouldn’t be too surprised to learn that Macworld UK is staffed mainly by iOS users, and we do prefer it to Android, but it doesn’t mean that we can’t appreciate Google’s rival operating system.

The 2017 iPad comes running Apple’s latest version of iOS, iOS 10.3, while the Samsung Galaxy Tab S3 features Android 7.0 Nougat. Apple is set to release iOS 11 in September 2017 and will definitely offer support for the 2017 iPad, while the same can’t be said for Android O on the Tab S3, which was recently announced at Google I/O. Android is infamously fragmented, and it’s difficult to say at this early stage whether a tablet released in early 2017 will get an update. 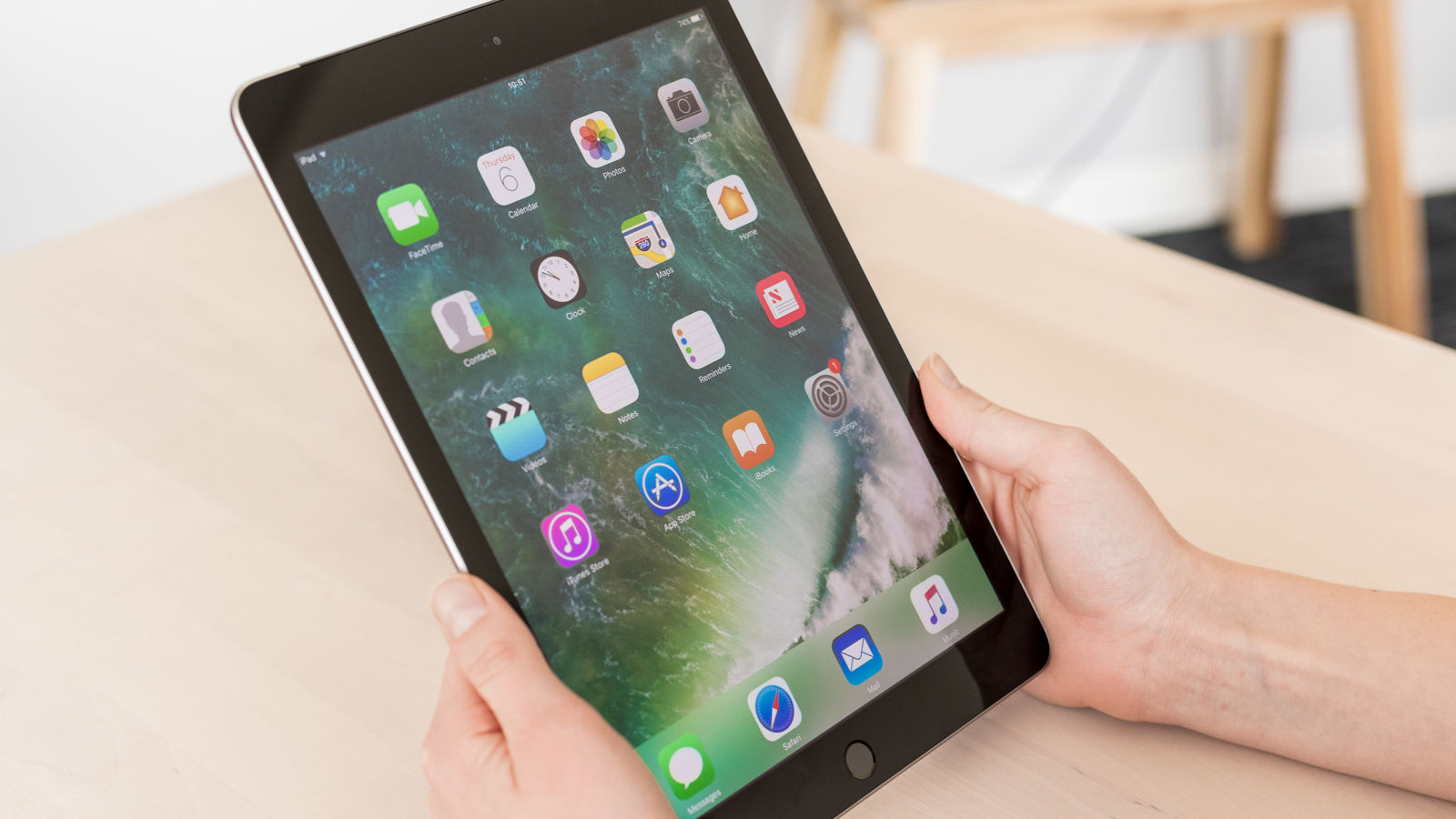 If you want to learn more about the differences between iOS and Android, the two mobile operating systems go head to head here: iOS vs Android.