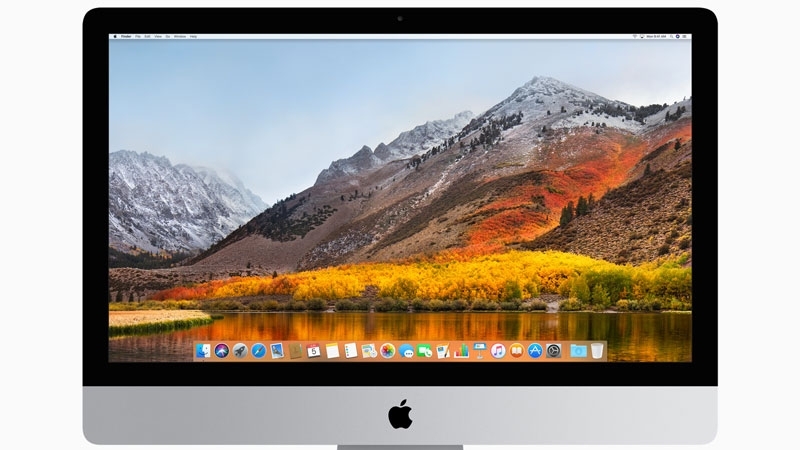 macOS High Sierra may not offer many radical changes to the user experience, but there are plenty of quality of life changes, and its under-the-hood alterations should help future-proof your Mac. Throw in the fact that every Mac that can run Sierra is High Sierra-compatible too and there’s really little reason not to upgrade.

macOS High Sierra arrived on Macs later on 25 September 2017, but not everyone has downloaded it yet. If you are wondering whether to bite the bullet and upgrade, read on to find out what to expect, and whether it’s worth the upgrade if you’re already happy with Sierra (or an even older version of Mac OS X).

Given that High Sierra is a free update, you might wonder why there’s any debate at all. But, there’s always a bit of work involved with updating a Mac, and that it can be pretty difficult to downgrade once you’ve done it. Then there is the fact that often, despite thorough beta testing, there can still be issues with the software and problems with compatibility, and that may well cause headaches for you. So you want to be sure before you jump to the latest version of macOS.

If you want more detail on each of the versions you can check out our Sierra review and our High Sierra review, but for now let’s put the two head-to-head.

Here’s one area you really don’t have to make a decision. Design-wise, Sierra and High Sierra are pretty much identical – the biggest change is the new High Sierra desktop background.

Of course, there are plenty of design tweaks to specific apps which we’ll get to below, but as far as the OS in general goes, it’s business as usual.

High Sierra features changes not only to the core function of macOS but also tweaks to a number of Mac users’ favourite day-to-day apps. Despite that, it’s got to be admitted that this isn’t one of the really exciting macOS updates.

As the name suggests, this is akin to Mac OS X Mountain Lion (which followed Lion) and Snow Leopard (which followed Leopard) – a mid-step upgrade that builds on Sierra while focussing on under-the-hood improvements that developers will care about, but that the average user might not even notice, although they will benefit from.

Nothing exemplifies that better than the biggest change High Sierra offers: a new file system. Yeah, thrilling stuff, we know.

The new Apple File System (APFS) may not be the sexiest OS update (debatably, what is?) but it is important. Already the file system in iOS 10 and 11, APFS changes the way macOS handles and organises data with a number of important benefits. 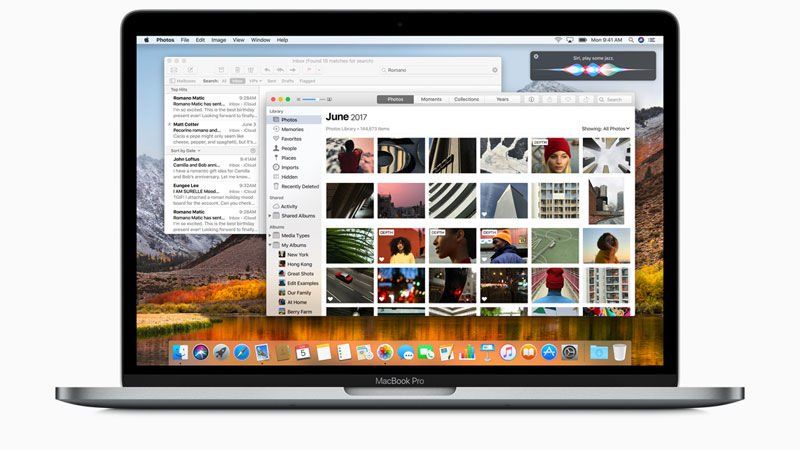 First of all, copying files and finding the size of files and folders should now be near-instantaneous, the sort of small improvement that will add up over long-term use.

It also helps keep files safe thanks to built-in encryption, data protection for power outages and system crashes, and simplified data backup. It’s also compatible with HFS drives and data so you shouldn’t lost anything during the upgrade – though we’d still always recommend a backup first.

Beyond APFS, a similar under-the-hood upgrade sees High Sierra adopt the H.265 video standard, also known as HEVC (High Efficiency Video Coding), which will make it easier to encode, stream, and store 4K video (files will be compressed up to 40 percent more than on Sierra), which is only going to become more important in the future.

Apple’s been a slightly slow adopter when it comes to VR, but with High Sierra that looks to be changing. The update adds the capability to use Macs to develop virtual reality content on compatible Macs using peripherals like the HTC Vive headset. 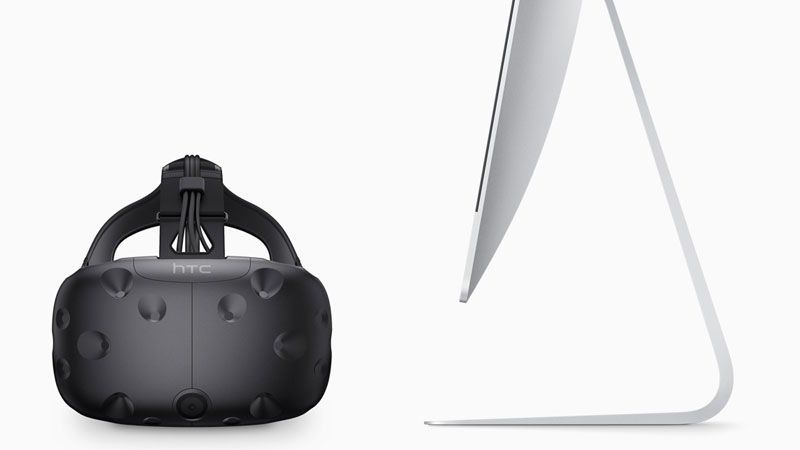 While new VR development tools won’t affect most of us, it could signal a move towards being able to actually use the Vive and other headsets with a Mac to play VR games and experiences – though you’ll need a high spec model with a compatible GPU – or an external GPU, support for which is another new feature expected in spring 2018.

Now we’re getting more into the sort of changes the everyday user will notice – except that the version of Safari that arrived on macOS High Sierra can also be downloaded for macOS Sierra and macOS El Capitan. So really there is nothing here to incentivise you to update.

That said, if you aren’t running Sierra or El Capitan right now, perhaps you are looking to upgrade from an older version of Mac OS X, such as Yosemite or Mavericks, then you’ll be interested to learn that Safari 11 features some welcome tweaks that should improve most people’s browsing experience.

First up, to the dismay of advertisers everywhere, there are easy to use settings in Safari that allow you to prevent videos from auto-playing, ending the desperate hunt for that one tab blaring advert music at you. You’ll even be able to choose to always see web pages with the ads entirely stripped out thanks to Safari Reader.

The new Intelligent Tracking Prevention will also limit how much sites can use cookies to track your browsing and serve ads based on your browsing history.

Finally, you’ll be able to personalise your browsing by creating custom settings for specific pages or sites – changing the default zoom setting on certain sites, or adjusting your location settings on a case-by-case basis.

If you want to gain these new features in Safari – and you aren’t running El Capitan or Sierra already – then an upgrade to High Sierra is going to be a must. Sure you can use ad blockers, and other software to get a similar result, but the new Safari will simplify the process.

When Apple discontinued iPhoto and introduced Photos with Yosemite back in 2014 some fans of iPhotos (and Aperture that was also discontinued) were critical of the way that the app simplified the tools offered for editing photos, reduced functionality and did away with things like the sidebar.

Those people will possibly be pleased to see that in High Sierra Photos has received some changes that return some of those features to the app, and add some more professional tools that would have been the domain of Aperture.

First up, the new always-on sidebar should make the app easier to navigate, while image editing should be easier thanks to a new layout, new advanced editing tools, and a selection of professionally-inspire filters. 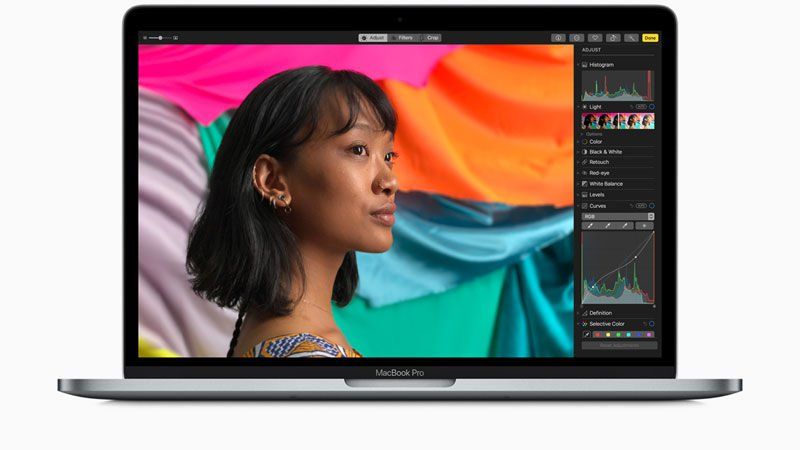 There’s also now support for external editors, so that you could use Photoshop tools to edit images from Photos and save your work into the default Photos library, simplifying things for anyone who works on their images across various software.

Live Photos are getting changes too, including the ability to create looping images, or make them ‘bounce’, playing a selection of frames forwards and backwards. The new Long Exposure effect will emulate a slow shutter speed to blur water or create light trails.

The headline change to Siri is primarily cosmetic. Apple has fine-tuned both the male and female voices so that they should sound less robotic and more natural, with more detailed expression and intonation.

Siri’s integration with Apple Music has also been improved ahead of the release of the HomePod, so that the virtual assistant will be able to recommnnend songs, create playlists, answer queries about tracks, and help with natural language queries like ‘play more music like this’.

We’re not sure how many people have adopted Siri on the Mac as a way of communicating. It can save some time if you wanted to “turn on Bluetooth” or “play music”, or “remind me I have a meeting at 4” but we feel a bit silly asking our Macs to do things when we are in the office (which is why we love the fact that it is possible to type to Siri on your Mac, but we wish this was a default option). We don’t think the new features in Siri in High Sierra will make anyone more likely to adopt it.

Mail has been tweaked too, with a change to search so it should be easier than before to find emails within your swamped inbox. 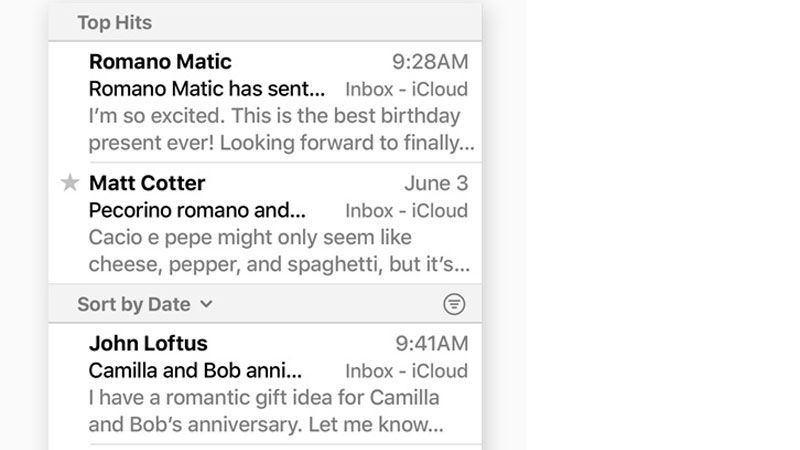 That’s thanks to the new Top Hits feature, which will appear at the top of search results. It will display a select few emails deemed most relevant to your search, based on the emails you read most, the people you reply to most, and more – and thanks to machine learning, it will get better at predicting your needs the more you use it.

This should help when it comes to finding emails, but initially it might be a bit confusing to find that emails aren’t in date order when you search for something.

This one’s good news for iOS users. In High Sierra Messages will be synced with iCloud, which brings with it a few welcome benefits. 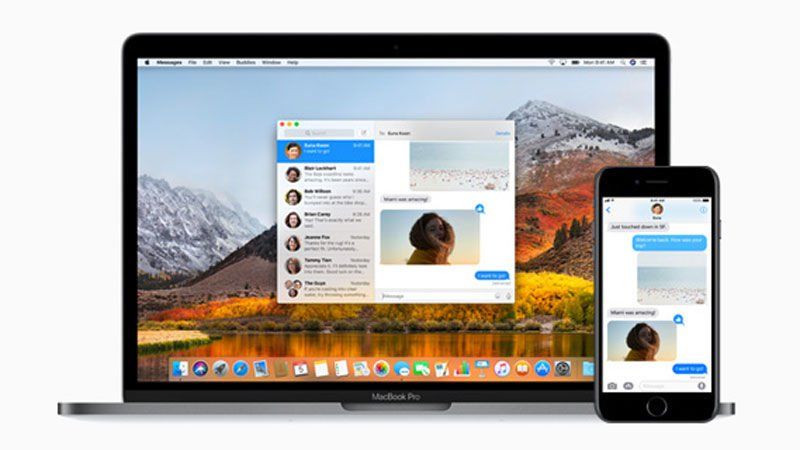 The biggest benefit being improved syncing across your iPhone, iPad, and Mac, so that you know longer read a message on one device only to see the notification for it pop up immediately on another.

Of course you will need to set Messages up on your Mac to receive standard text messages or you will only see iMessages sent from other Apple devices there. If you want to know how to do this read: How to send and receive text messages on your Mac.

In terms of iCloud, there are two welcome changes here. First up, the storage limit for iCloud Storage Plans is being upped to 2TB for £6.99 a month, so you shouldn’t run out of space any time soon (if you don’t need that much storage 20GB is £2.49 a month). Of course the allocation of storage and the price won’t change depending on which version of MacOS you are running.

Second, you’ll be able to share a file stored on your iCloud Drive with others via a link so that they can edit the original file, rather than creating duplicate copies. It’s similar to existing collaboration tools in some Apple apps, but it should be a simpler implementation.

It’s not clear if sharing files via the iCloud Drive this way will be limited to High Sierra users. We are confident that anyone will be able to access the shared file, whether on a Mac running an older version of MacOS or on a PC.

By far our favourite iCloud feature is the fact that since Sierra we have been able to share our Desktop across multiple Macs, and automatically access anything stored there on all of our devices. There is also the fact that we can copy something on one device and paste it on another as if by magic. These are features that arrived in macOS Sierra so if you are running an older version then you really ought to update and experience them.

Another app, another quality of life improvement. This time it’s the introduction of pinned notes, so that you can quickly access the notes you need the most without having to sort through them all. 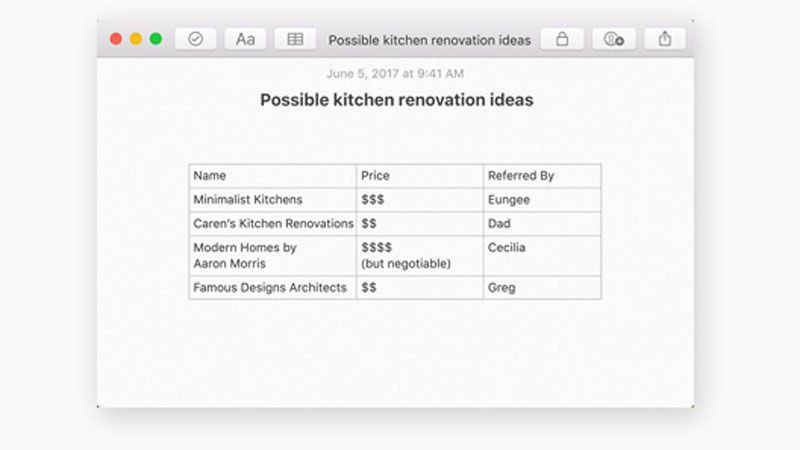 You’ll also be able to add tables to notes, which will save you from diving into Numbers every now and then.

Read all about the best features in macOS here: Best Mac tips, tricks and timesavers.

Here’s some good news: if your Mac is running Sierra, it can run High Sierra, as the two OS versions have exactly the same system requirements. For reference, these are all the current Mac models that can run both Sierra and High Sierra:

Updating from an even older version of OS X – read about how Sierra compared to El Capitan here.