The iMac Pro is an exceptionally powerful and stable system, but that was never really in doubt. The real question is whether you need its power and can justify its cost. This isn’t a gaming rig, even though its graphical capabilities are considerable: you’ll get similar specs at a fraction of the cost elsewhere. This is targeted at the niche of users in the creative, design, visual effects and illustration fields who need the ability to process major graphical and 3D rendering and editing tasks at a decent speed. Those involved in music production may find it ticks their boxes, too, but this is likely to be expensive overkill for the rest of us. We love the Space Grey finish, incidentally, and the matching peripherals look fantastic.

We’re still waiting for the new Mac Pro (and don’t even know which year it’ll be launched in), but in the meantime Apple is placating its pro users with this high-powered slab of processing muscle.

The iMac Pro is available with anywhere from eight to 18 cores, and from 32GB to 128GB of RAM. The thermal architecture, so problematic on the Mac Pro, has been redesigned with ‘dual blowers’ for a claimed 80 percent increase in thermal capacity. And the machine looks great too, with the current ‘pregnant iMac’ design given a new and rather lovely Space Grey finish, and matching peripherals.

We couldn’t wait to get our hands on the new system and put it through its paces in our most rigorous speed and graphics benchmark tests. Welcome to our iMac Pro review.

If you decide this machine is right for your needs, you can spec your iMac Pro on Apple’s website – click here for the UK store and here for the US store. And for more general advice, remember to check out our Mac buying guide. If you want to find out what to expect from the next generation iMac Pro, read our latest news about the iMac Pro 2 here.

Picture the 2017 iMac 27in (we’ll be making a number of comparisons with the i7 edition of this machine, incidentally); now imagine it in Space Grey. That, in most external respects, is what you get with the Pro. 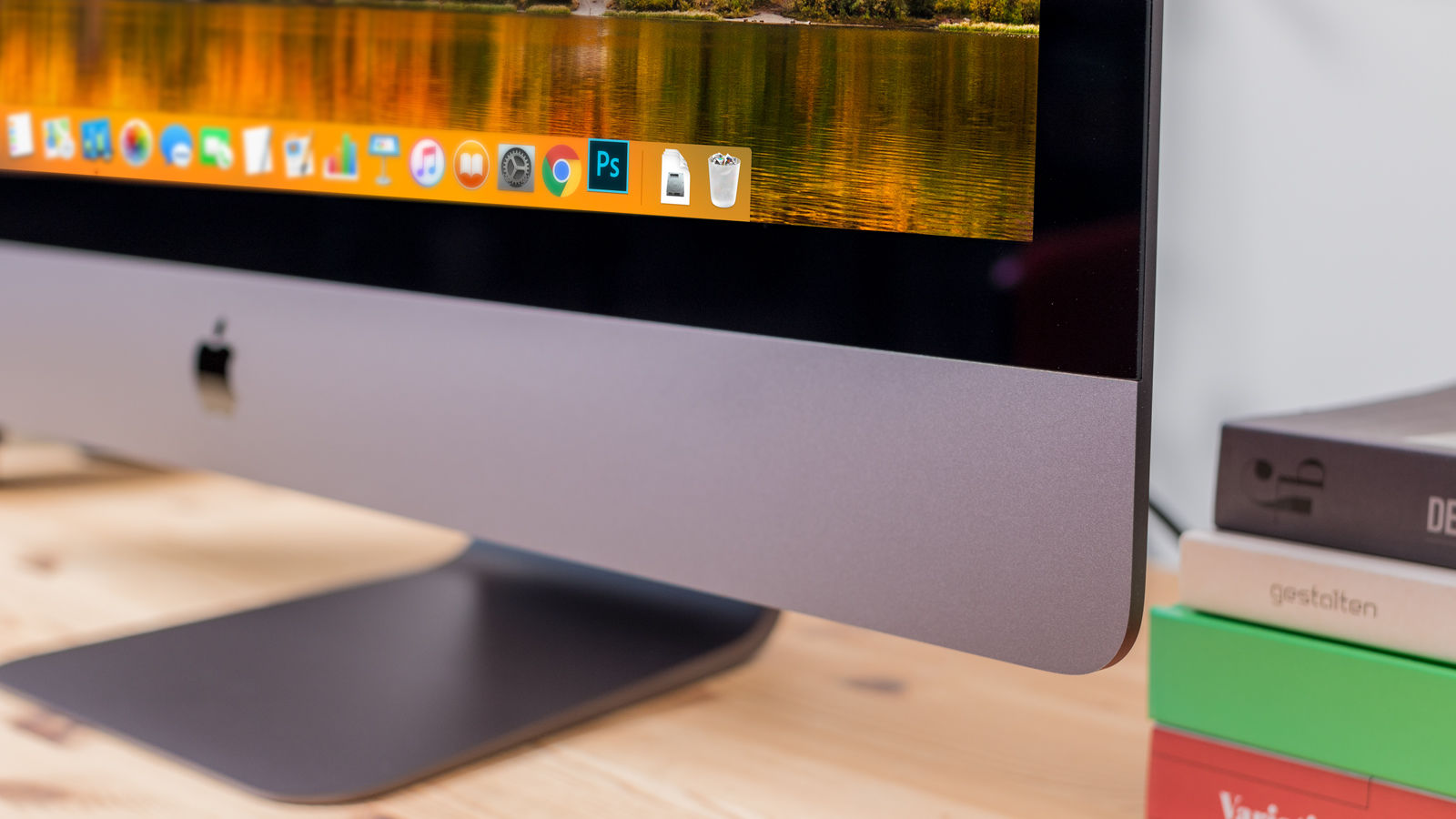 It’s an attractive, classic design. There are razor-thin edges around the monitor, giving the illusion of a flatscreen device, but most of the innards are concealed within a gently bulging belly on the back.

We like the reassuring heft and minimalist look of the stand, too, which is made from a single bent piece of aluminium of subtly varying thickness (thickest at the bend and tapering away as it approaches the user) and featuring a cleverly simple cutout to keep your power cable tidy and tucked away. And while it could never be described as lightweight (it’s 9.7kg) or mistaken for a portable device, the iMac Pro’s balance and shape are such that it’s surprisingly easy to pick up and lug to another room. 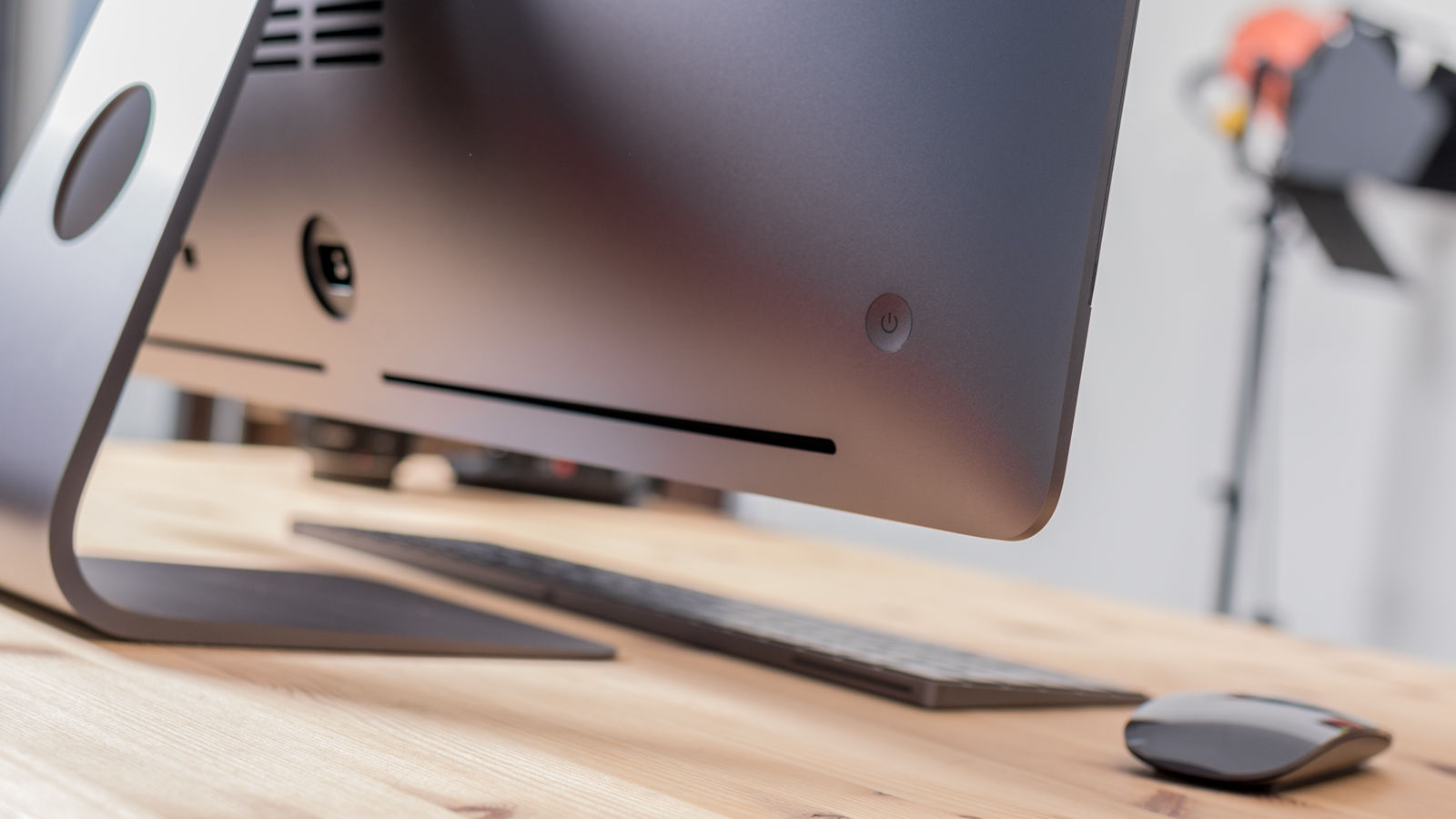 This is all old news, of course, since we’ve had this design in the iMac range for several years. So is the new colour worth talking about?

We’re going to be drilling down into hardcore processing performance in this article so it’s tempting to disregard cosmetic changes like colour finish; but this would be a mistake. The Space Grey finish looks superb, and given that you’re going to be looking at this object for multiple hours a day that isn’t an unimportant factor. It looks modern, and classy, and still unmistakably Apple. It will look great in a studio.

The Space Grey Magic Keyboard, Magic Mouse 2 and Magic Trackpad 2 that are available with the Pro are also stunning to look at, although the mouse in particular is a little less stunning to use; it’s so prone to collecting fingerprints that Macworld’s art director made us work with a substitute until we’d finished doing photography. And hilarious though it might seem to normal people, the bundled black Lightning cable that you use to charge the peripherals has very much tickled the fancy of Apple fans. 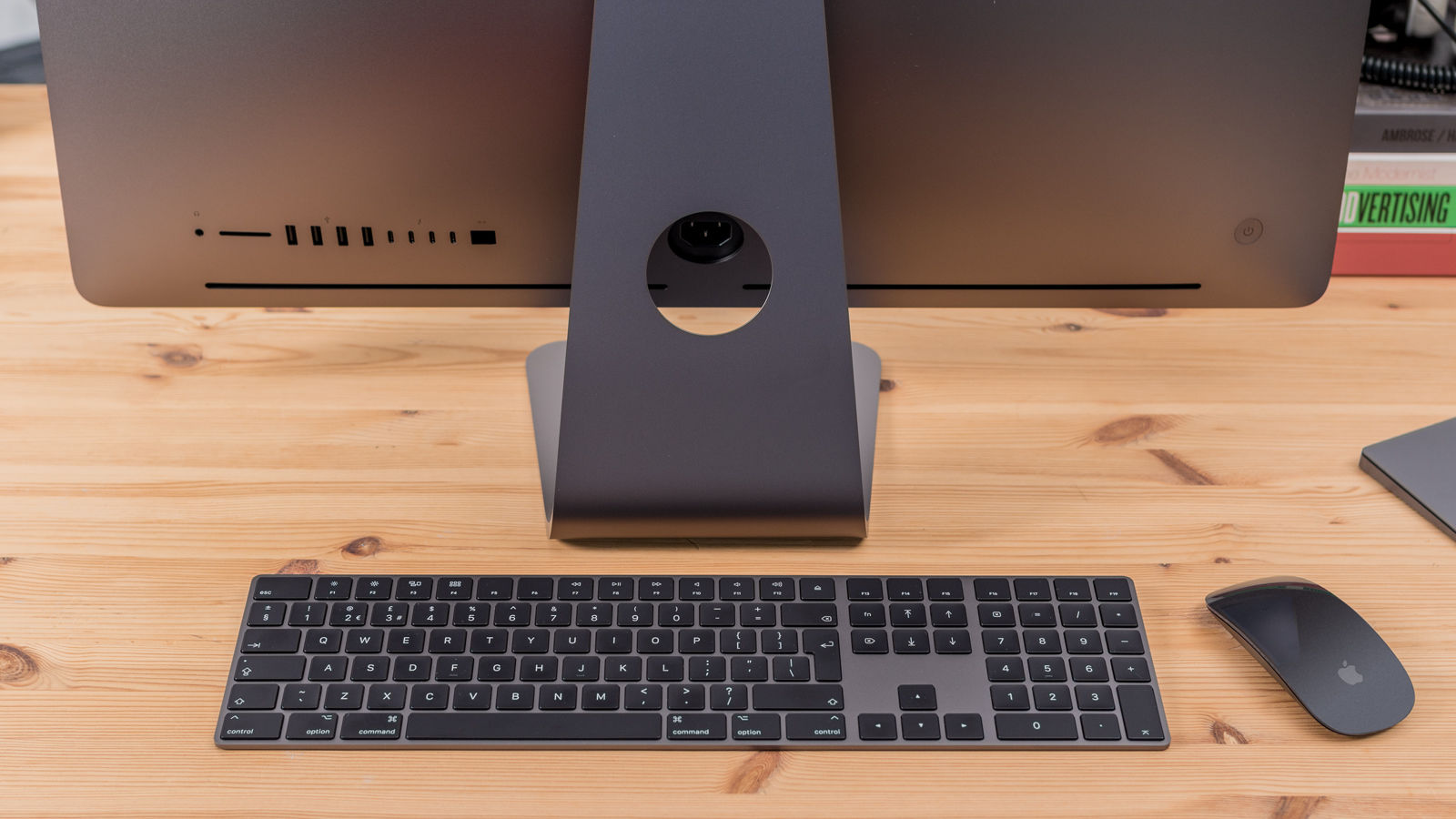 In its mea culpa to the creative and design community who depend on the Mac Pro, Apple admitted that machine’s thermal design was unsatisfactory, making it next to impossible to upgrade. The company expected the industry to move in the direction of multiple GPUs, whereas the trend was actually towards larger single GPUs, which generate more heat and which the Mac Pro’s trashcan design is unable to deal with thermally.

The iMac Pro should have no such problems. Apple says it offers 75 percent more airflow than the 27in iMac (thanks to the ‘dual blowers’) and 80 percent more system thermal capacity.

The significance and success of this redesign is hard to estimate at launch, since the Mac Pro seemed fine initially and the problems emerged only later. Looking at the matter subjectively, however, we can report that when using the Unigine Valley graphics test on a loop (with Extreme HD settings) the GPU topped out at 91 degrees Celsius.

That’s a little on the high side for what we’re used to, and a touch warmer than the iMac 2017, which peaked at 87 degrees while admittedly pumping out significantly lower framerates. But it didn’t cause any detectable slowdowns, and there was very little noise from the fans.

All the parts of the casing that are reachable from the front remained cool to the touch, although naturally there was a decent flow of hot air pumping out of the vent. 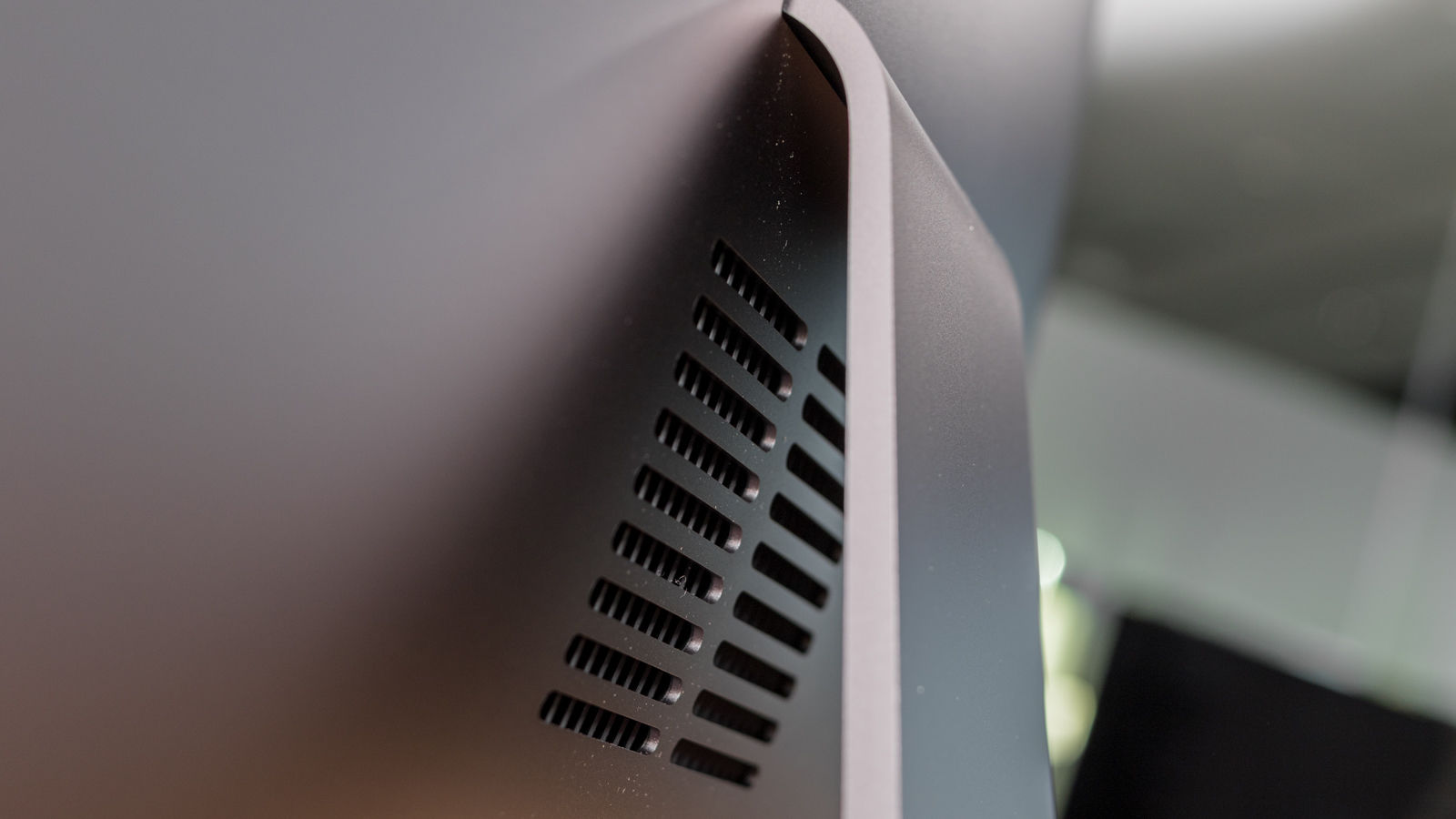 The Pro has a solid bank of ports round the back: four each of USB 3 and Thunderbolt 3/USB-C. In this respect it sits neatly between the 27in iMac (which has four and two) and the trashcan Mac Pro (four and six, although the latter are only Thunderbolt 2). 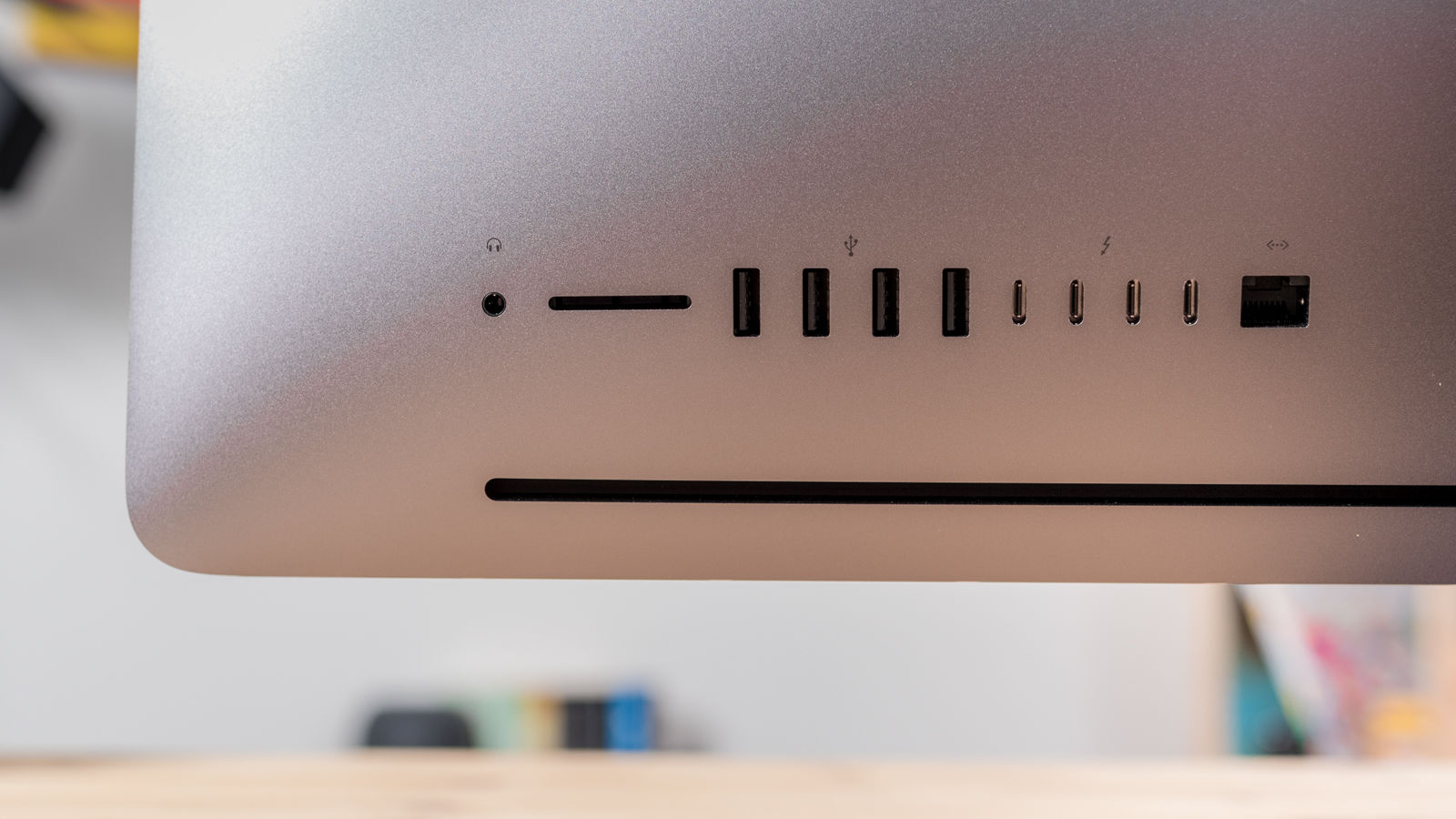 There are four microphones on the Pro’s chassis: one on the top edge, just above the FaceTime camera (like on the 2015 iMac), one either side of the camera, and one on the back. The 2017 iMac has only one, on the bottom edge.

The display is the same Retina 5K 27in unit you get with the larger of the 2017 iMac range. That means a whopping resolution of 5120 x 2880, claimed support for a billion colours, and 500 nits brightness. Subjectively it’s beautiful to look at: crisp, vivid and bright.

Our colleagues at Digital Arts have noted that Apple’s choice of aligning it to the P3 colour space – as used in digital cinema – rather than the Adobe RGB colour space makes more sense if you consider that it’s more for those creating motion content. It can only output 91% of Adobe RGB – which is roughly the same as the MacBook Pro – but the average buyer is unlikely to mind. 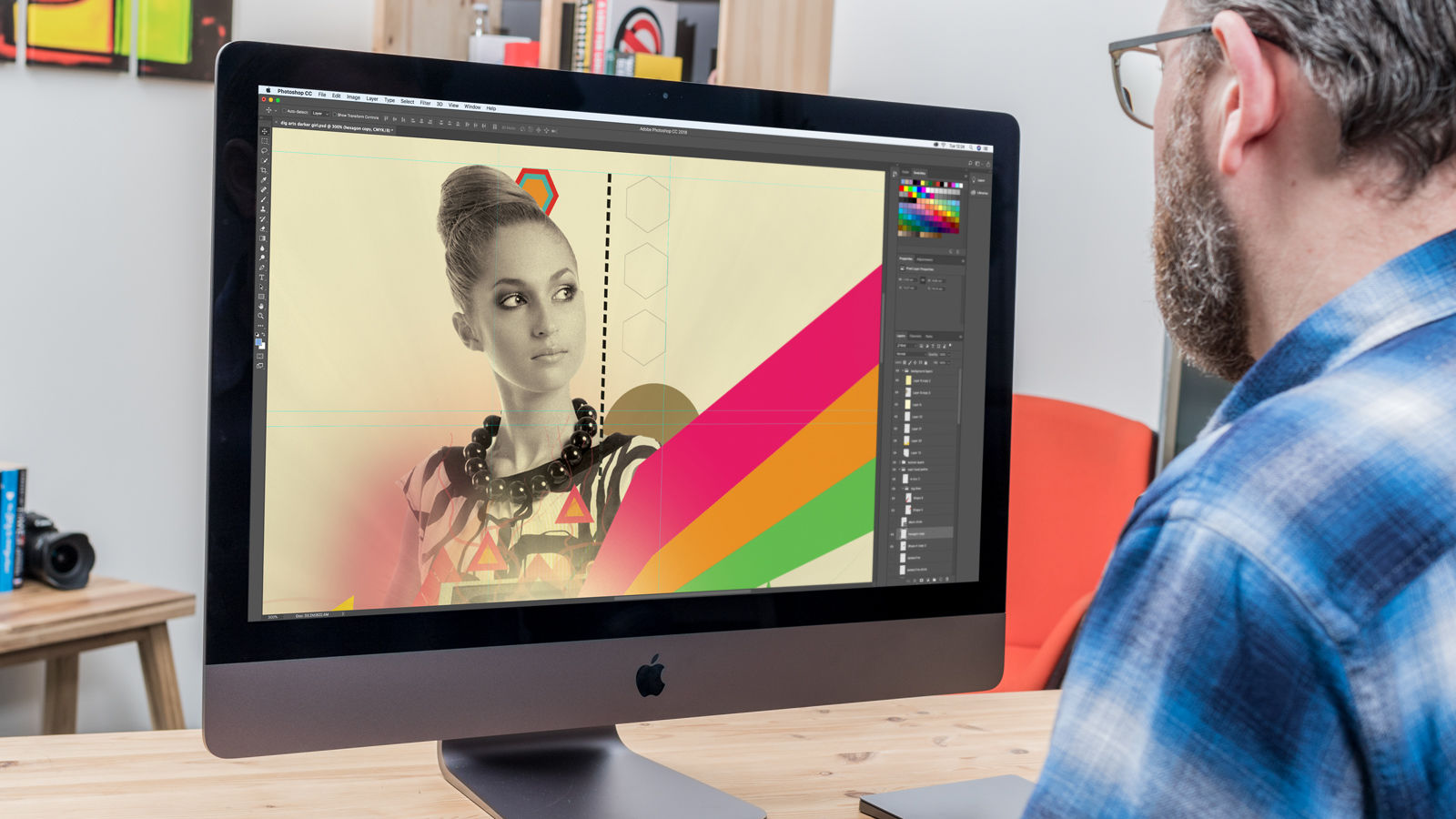 The iMac Pro is a powerhouse of a system. We reviewed the 10-core model with 128GB RAM and the Vega 64 GPU with 16GB of memory; Apple has been keen to stress that in terms of both processor and GPU chips the new iMac Pros are the fastest machines it’s released.

With all this power at our fingertips, we were excited to put it through our battery of tests. Here’s what we found out. (Note that these test results have been updated after patching the i7 iMac for Meltdown and Spectre, which was expected to cause a slight reduction in speed but did not do so noticeably in our experience.)

The iMac Pro averaged 5,424 in the single-core segment of Geekbench 4.2’s CPU test, and a monstrous 36,901 in multicore. This is a test of pure processing speed, and higher scores are better.

The Pro’s results dwarf the numbers we saw with the 3.4GHz version of the 27in iMac (2017) in the multicore segment, although that device managed a shade more in single-core: it scored 5,482 and 17,504 respectively.

This category of performance is niche to say the least, and you’re unlikely to see much difference between those two machines in anything but the most processor-intensive applications – although the gap will become more readily apparent in the years to come. But even now video editors, visual effects artists and 3D illustrators, among others, will appreciate the extra processing welly.

Apple predicted impressive drive performance for the iMac Pro partly because it’s split into two drives (512GB each in the starting config) for greater throughput. You’re also automatically given an SSD: there’s no option for a moving hard drive.

We ran the iMac Pro (and 2017 iMac) in Unigine Valley Benchmark 1.0, which evaluates performance and stability under high graphical workloads.

You should note that while it’s capable of high framerates, this isn’t a gaming machine by any means, and won’t provide value for money if that’s what you’re looking for.

As mentioned above in the thermal design section, the Pro’s GPU got pretty warm during this stress testing, peaking at 91 degrees Celsius, but didn’t display any signs of distress or slowdown. The thermal system coped fine.

Our colleagues at Digital Arts ran the iMac Pro in Cinebench, a benchmark suite which tests a system’s ability to render 3D scenes and stresses both CPU and GPU. They used the test, in which higher scores are better, to compare against the iMac 2017 and the late-2015 iMac 5K, too.

This set of test results uses Adobe After Effects 2018 (and in most cases the CineWare plugin) to evaluate the iMac Pro’s ability to complete complex graphical processing tasks. These are times taken to finish the tasks, so in this case lower scores are better.

In seven out of eight tests, the iMac Pro recorded a time less than half that of the iMac (which was noticeably faster in turn than the iMac 2015, as you’d expect), but we’d like to focus on the eighth test, Cinema 4D. This stresses the GPU, processor, disk input and output and RAM, and provides the clearest overall assessment of a system’s capabilities.

Here’s a selection of the results we got for the three machines.

Here are the specs of the iMac Pro. Where multiple built-to-order options are available, an asterisk indicates the model tested.

Here’s what the various custom options will add to the price. You can spec your iMac Pro on Apple’s website – click here for the UK store and here for the US store.

The basic spec includes a Magic Mouse 2 in Space Grey. Replacing this with a Magic Trackpad 2 adds £50/$50 to the price; if you want the mouse and the trackpad you’ll have to pay an extra £149/$149. 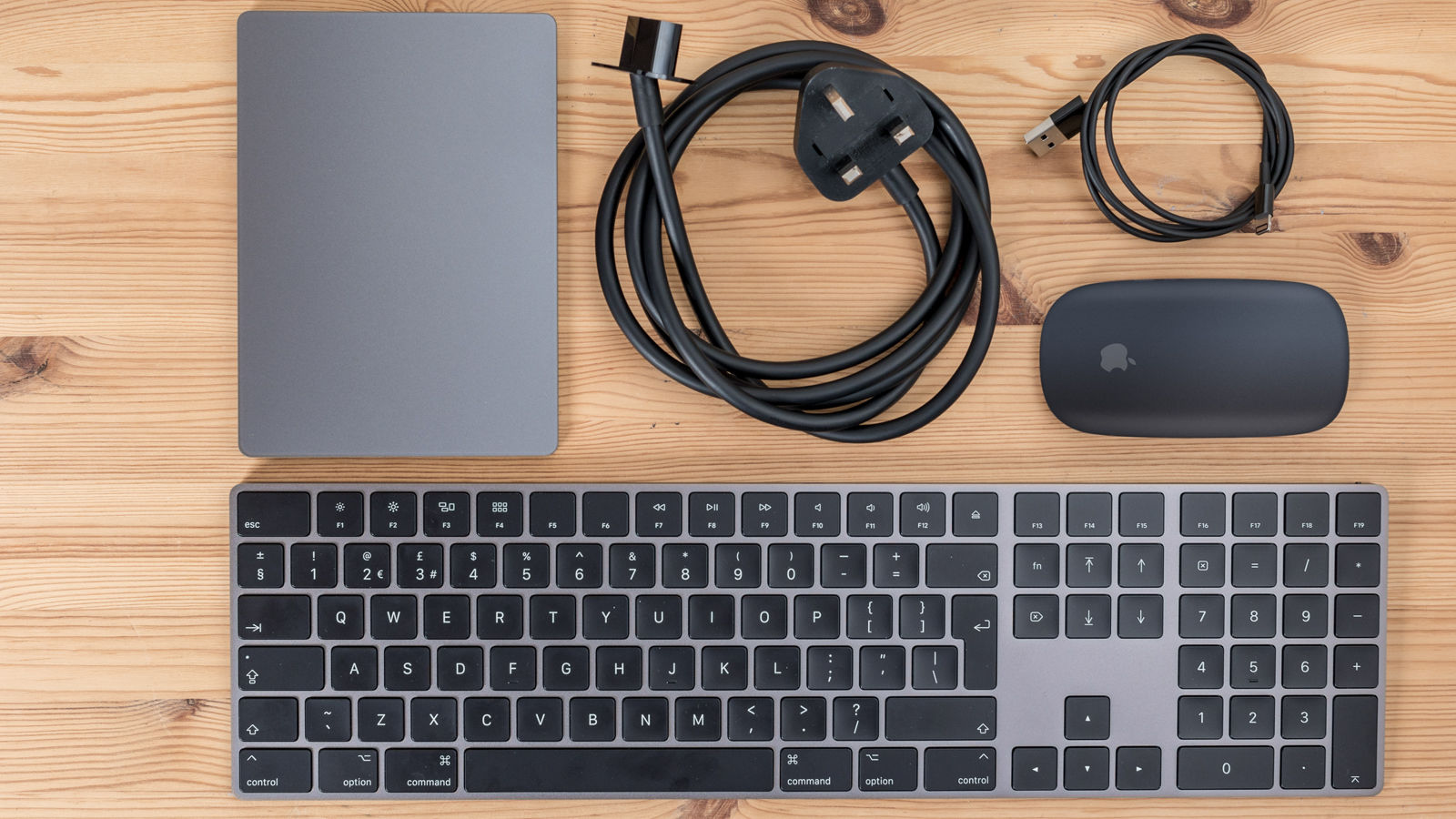