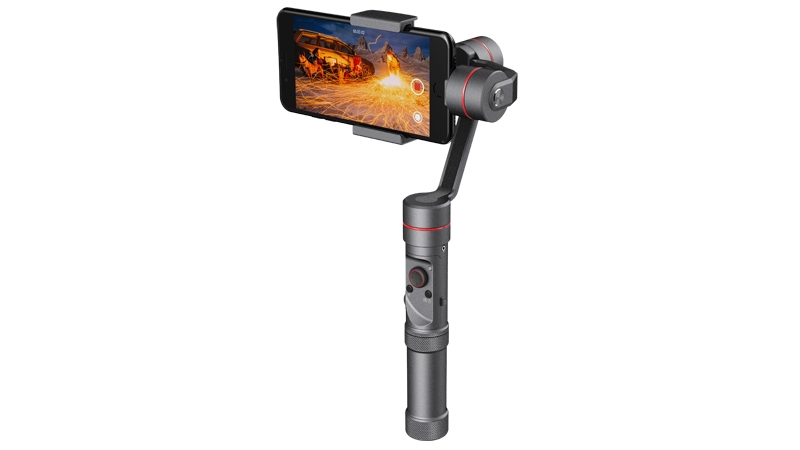 We really liked the Smooth 3. The size, weight and design are all top notch, and combine to make using the gimbal a joy. Our test footage came out looking truly cinematic: nobody would know it wasn’t filmed using a tripod. The app needs a little work but we see that from the App Store listing that improvements are constantly being made.

iPhone videography is great fun, but it can be hard to keep the device steady to produce that professional look. One solution is to use a stabilising gimbal such as the Zhiyun-Tech Smooth 3.

The word that springs to mind upon handling the Zhiyun-Tech Smooth 3 is “skinny”. Perhaps “svelte” is more poetic, especially when the Smooth 3 is considered alongside some the competition, such as the comparatively chunky DJI Osmo Mobile, which is featured in our Best iPhone camera tripods & gimbals roundup.

Despite this, the thin cylindrical main body of the Smooth 3 grips naturally in the hand, while controls such as the pan joystick are within comfortable reach of the thumb. The bottom half of the handle unscrews to reveal the battery, which is a standard 26650 Li-Ion unit, replacements for which can be bought anywhere for around £12. In other words, you can potentially carry around spares for weeks of filming with no need to be need a mains outlet – a very useful feature compared to the competition.

Notably, the Smooth 3 charges via a standard USB-A to micro-USB cable, so there’s no need to also carry around a charger plug either.

The metal finish of the Smooth 3 is pleasingly substantial. Our kitchen scales registered the Smooth 3 (without a phone) at 525g/18.52 ounces and this is better than some phone gimbals we’ve seen. Holding it certainly didn’t cause fatigue during our tests using an iPhone SE and, if anything, the weight felt just about right. We never felt any vibrations from the gyroscope or motors, which had been a noticeable although also essentially negligible issue with the Osmo. 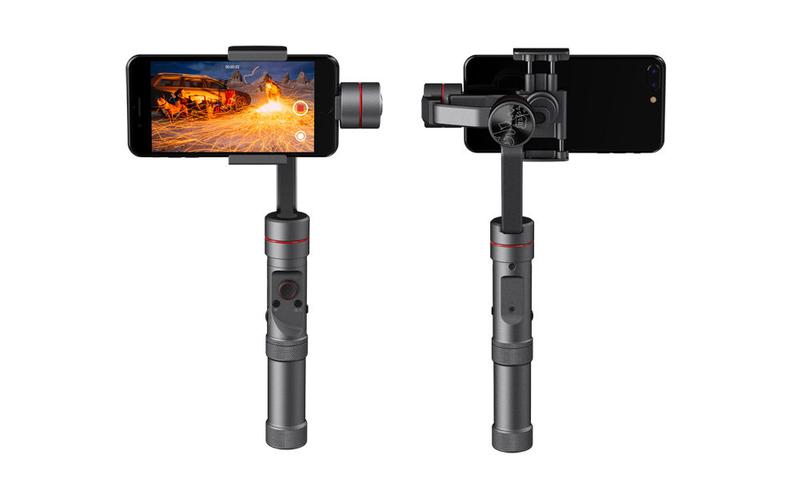 Setup involves balancing the smartphone in the cradle by adjusting various thumb screws. Once powered on the Smooth 3 springs to life in the uncanny way of all gimbals, in which the phone is held perfectly level and smooth. It never failed to come correctly to life in our tests, which again was not true of the Osmo.

The Smooth 3 operates in one of three user-selectable modes that are switched between by pressing or double-clicking the M button on the device, as follows:

Locks the forward and back rotational movements (tilt and roll) so that the phone is always held perfectly vertical. However, rotating the body of the device left or right will cause the phone to pan left or right to match, and using the joystick to pan up and down will adjust the tilt and roll. This is the default mode when the unit powers on, and is ideal for everyday use.

Up, down, left and right are locked so that the phone is always held perfectly vertical and horizontal, and therefore pointing roughly always in the same direction – regardless of how you move the Smooth 3. This is ideal when filming a subject that you don’t want to accidentally lose from the frame – perhaps during an interview, for example, or sports event. However, if the subject subsequently moves quickly you might have trouble getting them back into shot unless you switch modes.

The opposite of Locking Mode, in which the phone will turn left or right, or tilt up or down, to match how you hold the gimbal. Essentially, this is very like using a selfie stick, although the phone is still stabilised against vibrations or wobbles, so the image is still incredibly steady.

While Locking Mode causes the power indicator light to stay steady, there’s no indication on the device which of the other two modes are in use. This is an irritation, as is the fact that power indicator light consistently flashes to indicate the power level of the battery – three quick flashes mean the battery is up to 75% charged, for example. Constantly blinking lights are never welcome but gadget designers seem oblivious to this.

The Smooth 3 comes into its own with Zhiyun-Tech’s own ZY Play app, a camera app available free in the App Store that has knowledge of the Smooth 3 hardware and connects via Bluetooth. If nothing else this lets you stop and start recording using the button on the Smooth 3, for example, and lets you adjust and finely configure the Smooth 3’s motors.

As just one example, the left/right panning during Following Mode was a little too leisurely for my tastes, so I was able to speed it up by digging into the settings. However, beware that these settings are unforgivingly technical and not for newcomers. I got by mostly by experimentation.

Undoubtedly the most amazing feature of the app is Object Tracking. By tapping a small icon at the bottom left of the iPhone screen, and then dragging a box around an object, the app will then make the Smooth 3 move so that object in kept in shot at all times – regardless of how you pan or tilt the body of the Smooth 3, or how the subject moves.

For example, if interviewing somebody on video you could activate the feature and then drag a box around the individual’s face or eyes. This will mean that even if you move the gimbal away or closer, the subject will always be locked into shot.

This works uncannily well on virtually any object – in our tests it successfully locked on to a wayward cat’s head, for example, and seemingly even understood that objects exist in three dimensions. However, it’s also evidently still a work in progress. We found that the tracking sometimes became lost, in which case the gimbal would go a little crazy when it hunted for the object again, and we also found using the feature crashed the app on our iPhone SE several times.

In addition to the mode button, joystick and power button – which doubles as a shutter release when the app is in use – there’s also a function-switch button on the right side of the body, and also what Zhiyun-Tech calls a handwheel on the left-hand side of the body (essentially a thumbwheel). These can be used in concert with the app to switch and quickly adjust settings. Outside of the app they don’t appear to do anything at all.

The handwheel’s default function is to digitally zoom in and out when taking photos and videos using the app, and this can be irritating because it’s easy to accidentally catch it with your thumb. We couldn’t find any way to turn this off.

Another curious feature of the app was that it didn’t let us access the full 4032 x 3024 (12Mp) resolution of our iPhone SE for stills photography. The app maxes out at 4096 x 2304, which is slightly over 9Mp. Video resolutions offered by the app were the same as the built-in Camera app, though. This is a strange omission, and surely easily fixed. 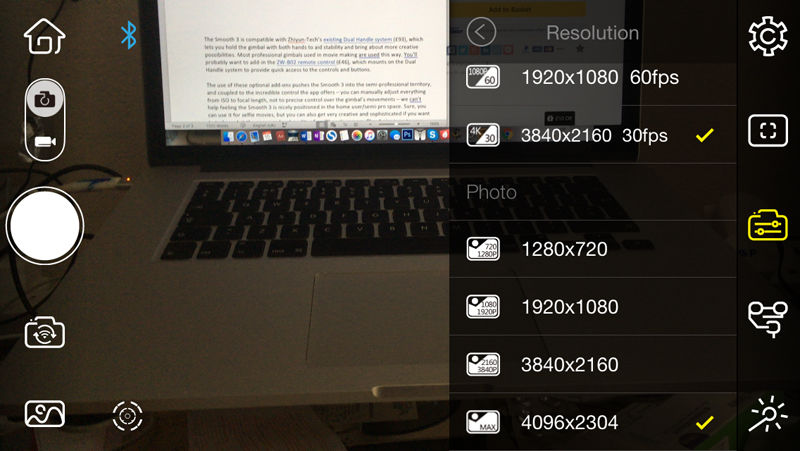 The Smooth 3 is compatible with Zhiyun-Tech’s existing Dual Handle system (£89), which lets you hold the gimbal with both hands to aid stability and introduce more creative possibilities. Most professional gimbals used in movie making are used this way. You’ll probably want to add-in the ZW-B02 remote control (£38), which mounts on the Dual Handle system to provide quick access to the controls and buttons.

The use of these optional add-ons pushes the Smooth 3 into the semi-professional territory, and coupled with the incredible control the app offers – you can manually adjust everything from ISO to focal length, to precise control over the gimbal’s movements – we can’t help feeling the Smooth 3 is nicely positioned in the home user/semi-pro space. Sure, you can use it for selfie movies, but you can also get very creative and sophisticated if you want to truly exploit the near-pro-level quality of an iPhone’s camera.

Having this amount of space to play within feels very nice.