Skip to content
Home / Mac / Reviews
Computerworld
At a Glance

The new Mac Pro has an astronomical price, but it looks like an astonishingly powerful machine, but will that be enough to entice creative pros back to Apple after the fiasco of the 2013 Mac Pro?

Back in 2013 Apple made a big deal at WWDC about a revolutionary update to the Mac Pro that it suggested was proof that Apple could still innovate. Six years on and Apple has finally launched a successor to that Mac Pro.

Why the long wait? The 2013 Mac Pro couldn’t been upgraded because, in the words of Apple’s senior vice president of Software Engineer, Craig Federighi: “We designed ourselves into a thermal corner”.

This revelation was made at a briefing with a select few journalists in April 2017. At the meeting Apple admitted that it had made a bit of a mess of the Mac Pro and explained that it was “completely rethinking” the design and its approach. Creatives cheered, or at least those ones who were still listening.

True to its word Apple has now started selling the new Mac Pro for 2019. The new machine has been completely redesigned with a stainless steal frame that lifts off to reveal a modular design that makes upgrading and enhancing the Mac Pro possible in infinite ways.

You can buy the new Mac Pro from Apple here.

Here’s our first look at the new Mac Pro, where we will assess whether the Mac Pro looks set to meet the demands of its target market. There’s also lots of information about the Mac Pro here. 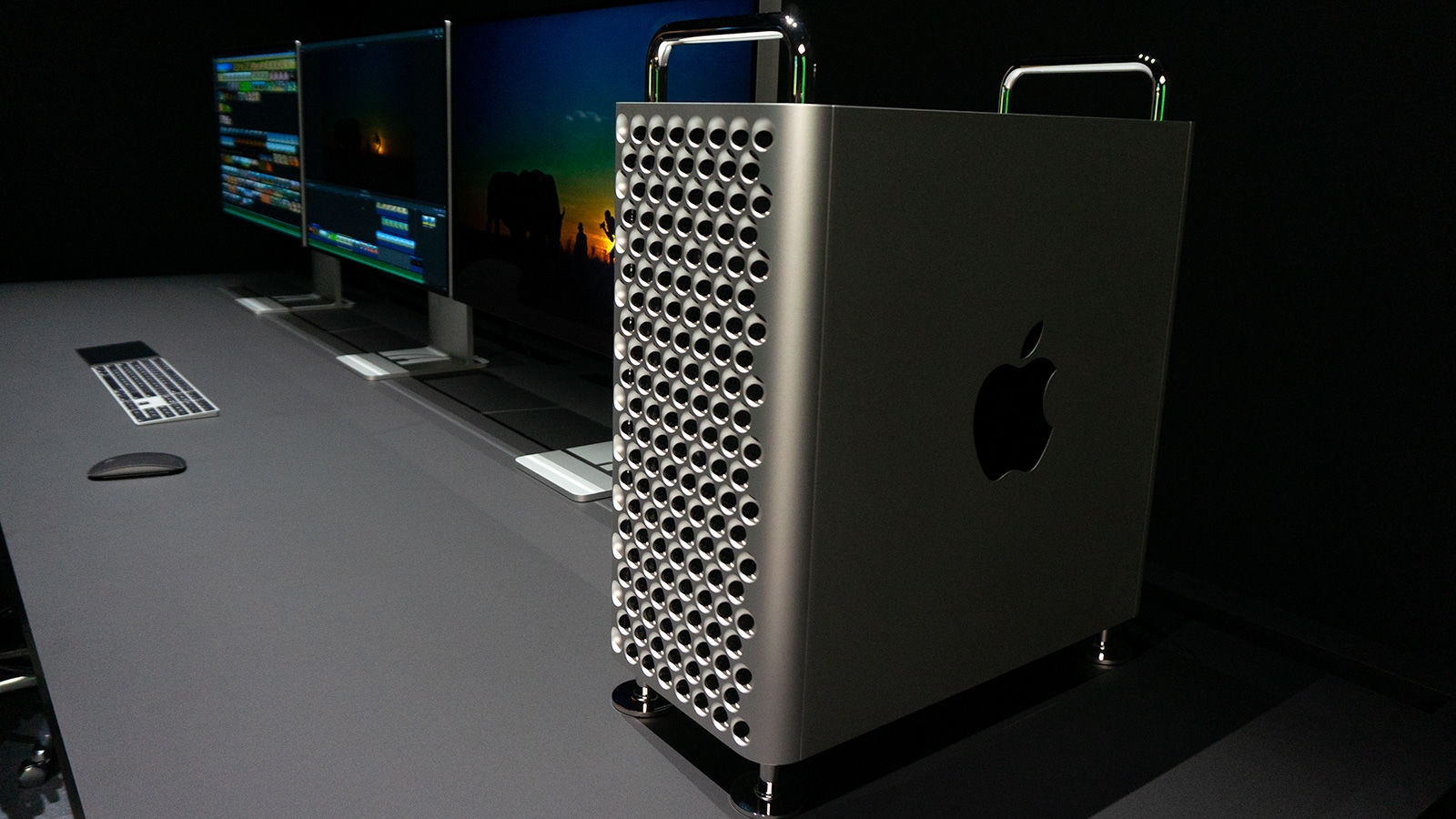 While we were watching the WWDC keynote we had a bit of a wager amongst ourselves about how much the new Mac Pro would cost. The closest guess was based on the price of the current iMac Pro, which starts at £4,899/$4.999. Anticipating a slight jump to the Mac Pro, but not so much of a jump as Apple will actually want to sell a few, we estimated £5,500. Apple’s price: £5,499/$5,999.

Not a bad guess! But it’s a lot of money. Is it too much?

But even in comparison to other workstations, such as the Microsoft Surface Studio (from £3,499) or an HP Z4 Workstation (£3,178), the price looks high.

If you are already balking at the price though you might want to sit down, because the price gets a lot higher than that. A top spec Mac Pro costs a wopping £47,079/$52,199!

This isn’t a Mac for the general public though. It’s not even a Mac for Apple’s biggest fans who have to have the latest kit. This is a Mac with a price that will probably be swallowed up by the budget for the next multi million dollar blockbuster.  And if Apple’s tests are to be believed it could save studios a huge amount of time so the next blockbuster might just hit our screens even earlier.

Apple probably could have made the new Mac Pro smaller, but they seem to have learned their lesson now.

Because it’s such a hulk of a machine there are two sturdy handles on top, and you can buy wheels (an additional £360/$400) so you can skateboard it around the studio.

It’s not just the dimensions and weight of the new Mac Pro that reminds us of the old-old Mac Pro. The pre-2013 Mac Pro was an aluminium tower that many described as a cheese-grater due to the holes on the case, and the new Mac Pro recalls that design, although now the holes are bigger.

We just so happen to have a collegue who has Trypophobia, which is an aversion to the sight of irregular patterns or clusters of small holes. It seems likely that the Mac Pro will trigger some sort of reaction for her, and if you are equally afflicted then maybe it will for you.

If you don’t suffer from Trypophobia you’ll probably like the modern, slightly alien looking, design. Otherwise, just look at the side rather than the front. There is a reason for the design: it optimizes airflow. Apparently the lattice pattern is based on a naturally occurring phenomenon in molecular crystal structures. 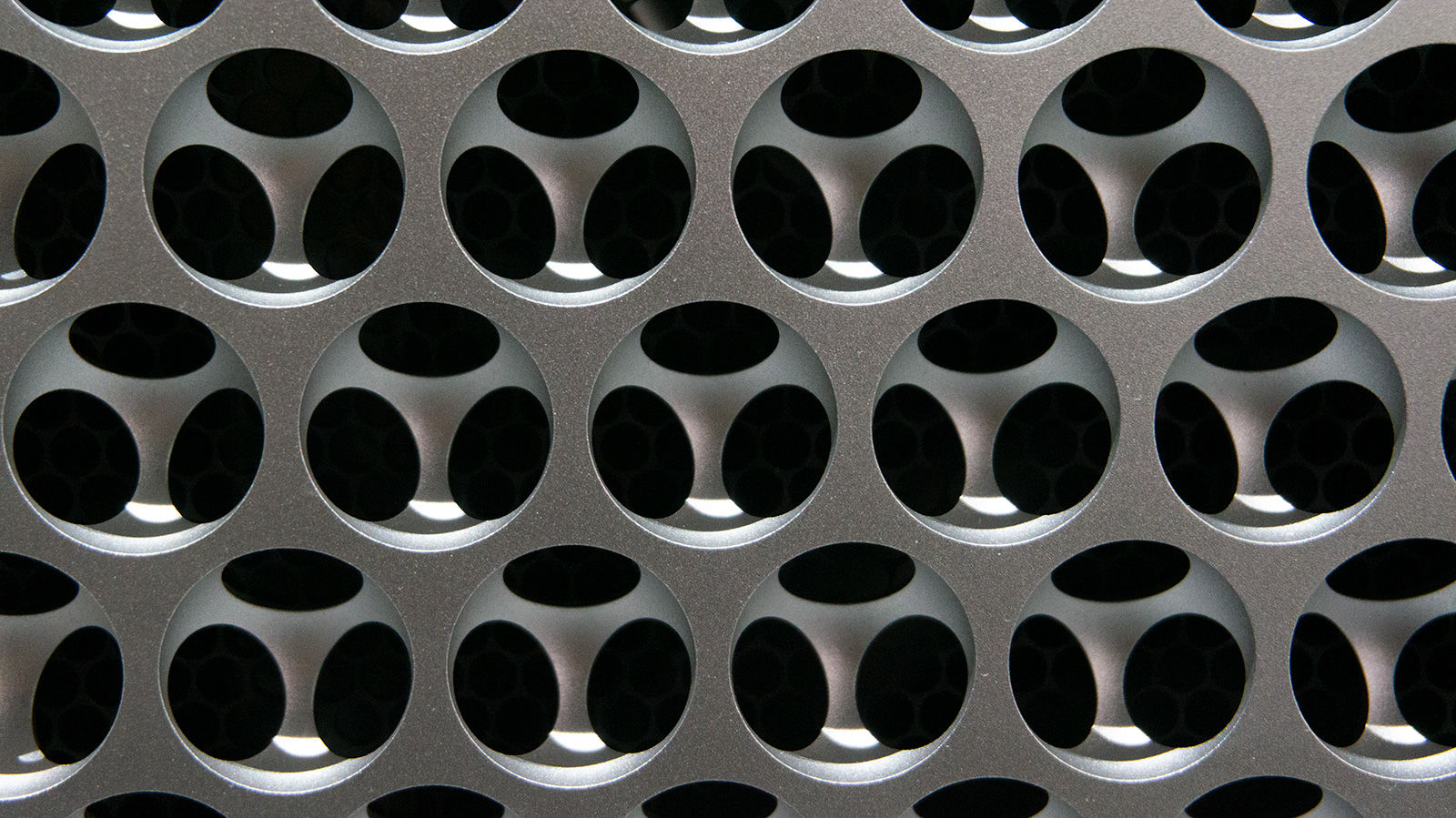 The new Mac Pro isn’t just designed to look pretty though. It’s designed to be flexible and easy to upgrade. Apple says that the new Mac Pro is “built to change with your needs”. It has a stainless steel frame that houses its range of components, and over the top of this slides an aluminium case.

Apple’s also had to design a thermal system capable of dealing with the high power CPU and GPUs.

All of this attention to upgradability and cooling requirements makes us about 95% confident that Apple won’t be revisiting the same mistakes that it made with the 2013 model. But there’s still that niggle of doubt based on the past six years. Hopefully when we get to spend more time with the new Mac Pro we will be more confident.

There are multiple configurations of the new Mac Pro available, with up to 28-cores, up to 1.5TB RAM, up to 4TB SSD, and a configuration that features two dual graphics cards for four GPUs in total.

These are going to be some pretty powerful machines. We look forward to running benchmarks when we get our hands on one. Below we will look at the specs in a bit more detail, but beyond establishing what’s on offer it’s not going to be possible to draw any real conclusions yet. 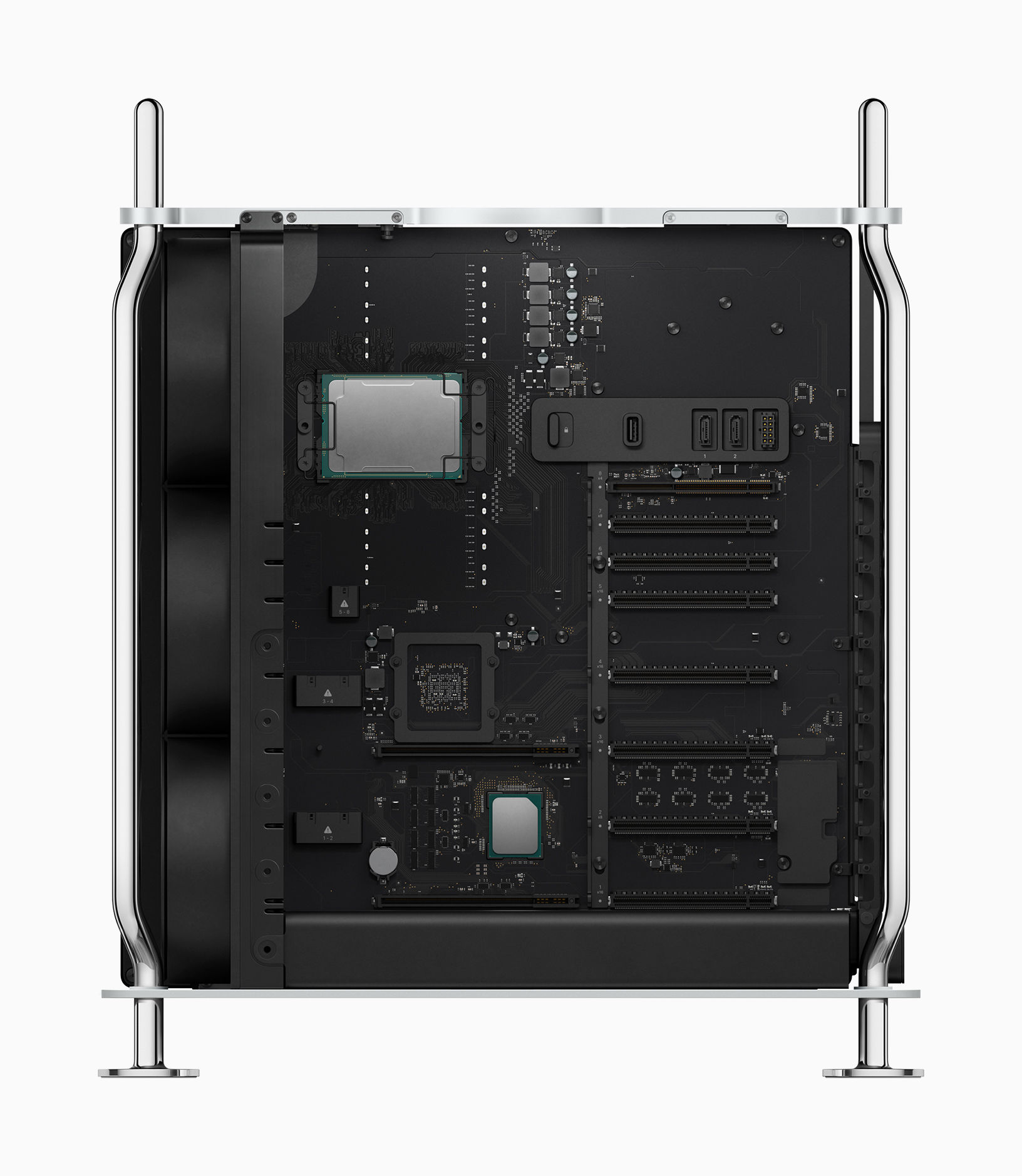 The interesting comparison here is probably with the iMac Pro which has the following configurations:

If you need the ultimate in CPU power then the Mac Pro is going to offer it, but if you just need a great creative workstation, you will want to know what the Mac Pro offers that the iMac Pro doesn’t. Given that the iMac Pro costs less, AND comes with a screen, it’s probably going to be the iMac Pro that you pick, but there is of course a lot more to the decision than that and we will be looking in to it in a separate article.

Here’s how the pricing for the processor options lines up: 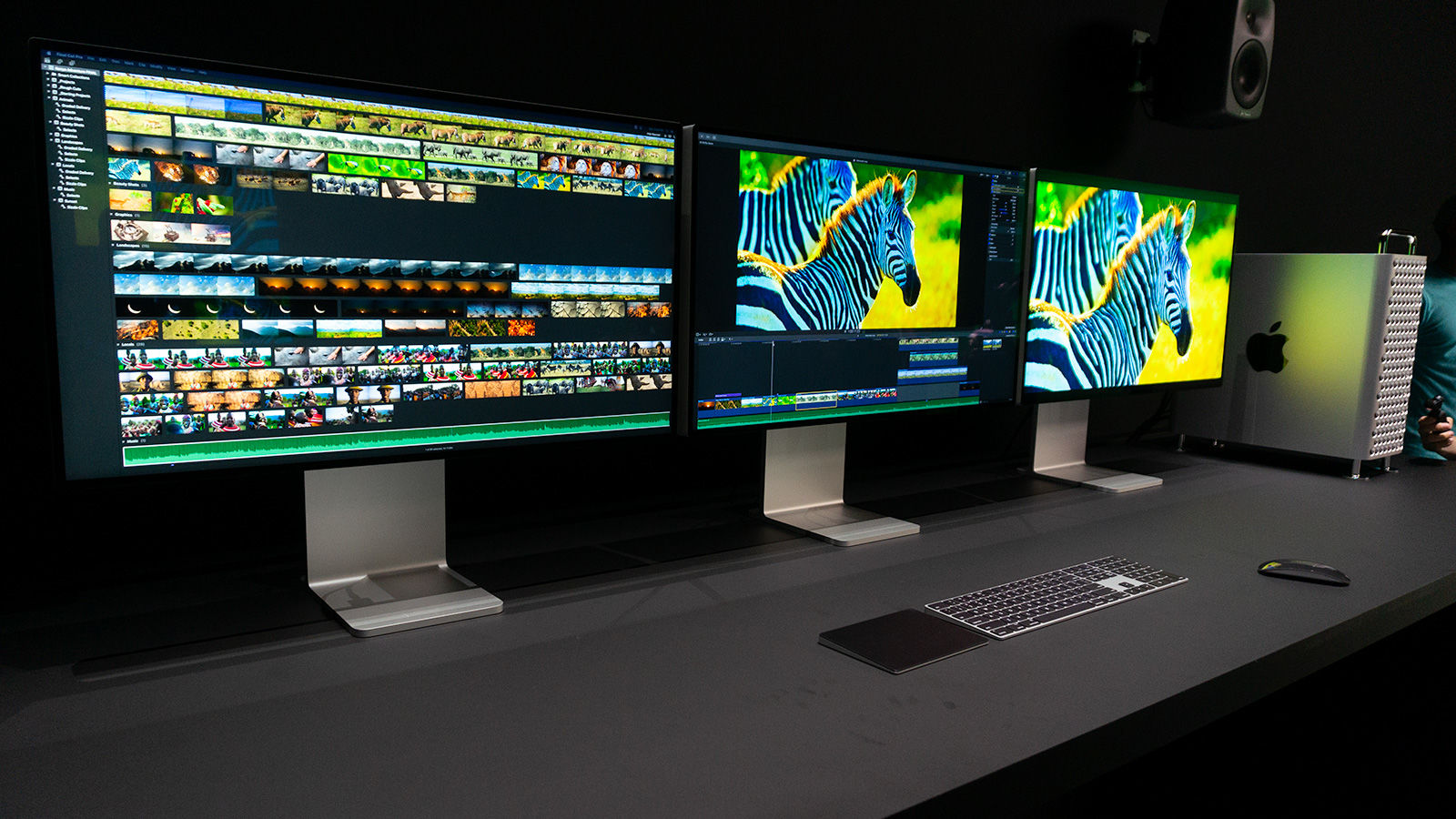 Back when Apple introduced the trash-can Mac Pro in 2013 it marked a move to flash storage, with no hard drive options. We are completely sold on the advantages of flash storage, but back in 2013 people who work with a lot of large files were understandably concerned about the smaller storage options (smaller, or much more expensive).

It’s likely that the concerns remain about storage size – but we don’t imagine many people would invest in a hard drive equipped system these days. (It’s why we think that Apple should ditch the hard drive from the iMac line up).

Not that there are limits to the amount of storage you can get for your Mac Pro. The entry-level model offers an 256GB SSD but it is configurable to a 1TB, 2TB, or 4TB SSD.

Here’s how the storage pricing options lines up:

This is a machine designed for creative professionals and it has graphics card options to match. Some seriously powerful graphics cards.

Options include the Radeon Pro 580X at the entry-level and the AMD Radeon Pro Vega II.

That Radeon Pro Vega II features up to 14 teraflops of compute performance and 32GB of memory with 1TB/s of memory bandwidth, which is the highest of any GPU, according to Apple.

There are even more options if you need extreme graphics capabilities. Apple is going to be selling two additional modules, the Mac Pro Expansion Module and the Afterburner.

Also known as the MPX module, the Mac Pro Expansion Module has an PCI Express connector, graphics card, additional PCIe lanes integrate Thunderbolt, up to 500 watts power. Apple says it has the “power capacity equivalent to that of the entire previous-generation Mac Pro.”

The MPX can ship with TWO Radeon Pro Vega II Duo GPUs. That’a an astonishing four Radeon Pro Vega II cards! Those four GPUs combine to add up to 56 teraflops and 128GB of high-bandwidth memory. The two Duo GPUs are connected through the Infinity Fabric Link, which allows data transfer up to 5x faster between the GPUs.

All in all these new Mac Pros look like they will have some pretty impressive graphics credentials. If money is no object. 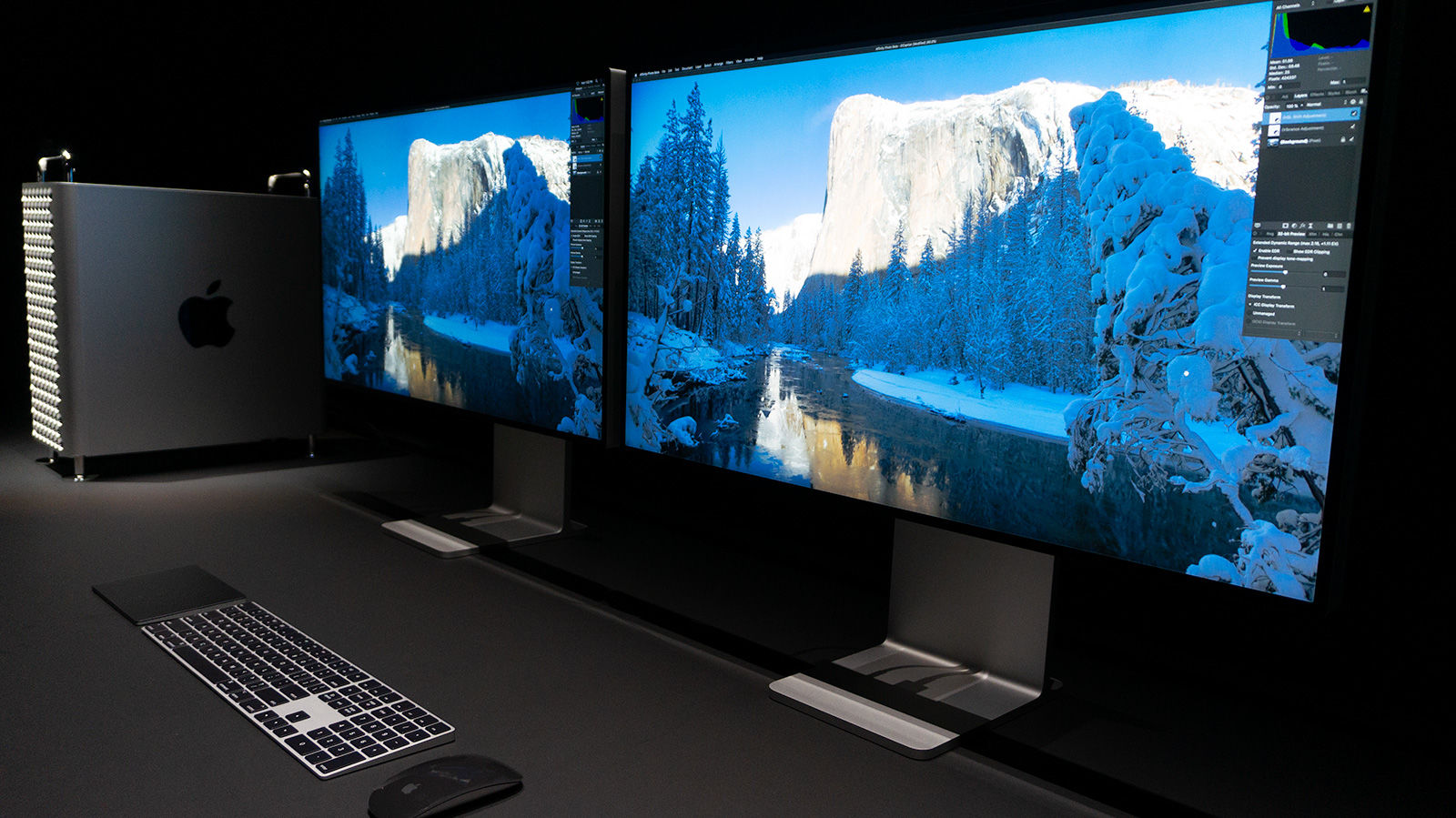 Here’s how the pricing for the graphics card options lines up:

The new Mac Pro will be the “most configurable and most expandable Mac ever made,” according to Apple CEO Tim Cook.

The 2013 Mac Pro had six Thunderbolt 2 ports and little else. The new Mac Pro has up to 12 Thunderbolt 3 ports, with two conveniently located on the top for quick and easy access.

Upgraders can also utilise the eight PCI Express expansion slots (twice that of the previous-generation Mac Pro tower). There are four double-wide slots, and three single-width slots. Plus there’s a half-width slot where Apple plugs in its own I/O card that comes with two Thunderbolt 3 ports, two USB-A ports, and a 3.5mm audio jack.

This new modular machine looks like it will meet the demands of creative pros desperate for an upgradable machine that can stand the test of time. 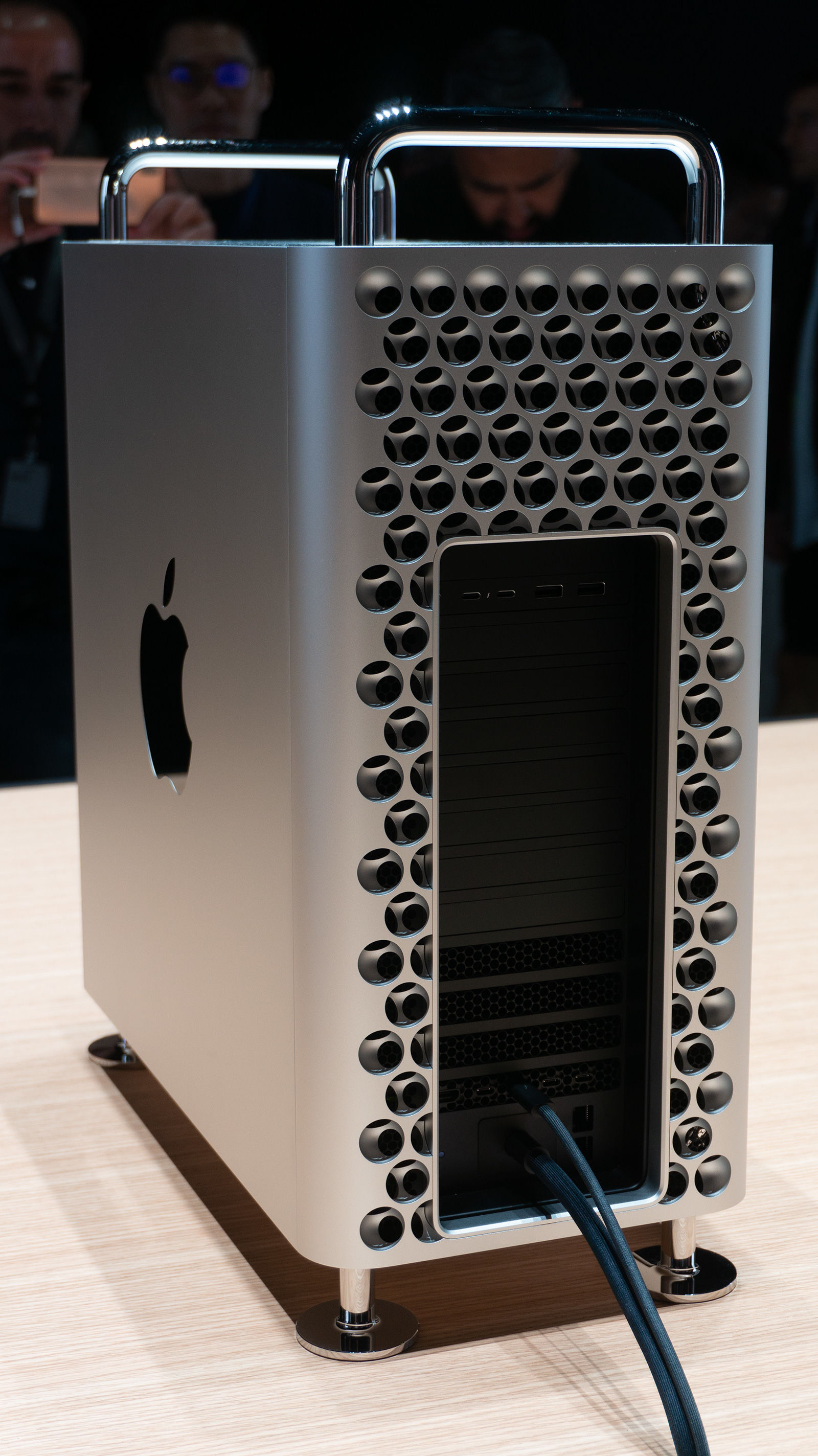 We’ll hold back from a final verdict until we get to spend some more time with the 2019 Mac Pro.

We are quite confident that Apple won’t have repeated the mistakes it made with the 2013 Mac Pro this time round, but will creative professionals share our confidence, and be prepared to pay such a high price.