The Note 8 has a bigger (and notchless) screen, but this means it’s a bigger and bulkier device; both phones have good screen-to-body ratios, with minimal bezels.The Note’s screen is also sharper, but both are fabulously sharp as it is and we don’t think you’d notice much difference in practice. Samsung offers a slightly higher-rated front-facing camera, but the iPhone X counters this by offering its Portrait Mode bokeh effect on front-facing shots as well as on the rear.  Face ID, demo embarrassments aside, should be a far more secure and sophisticated biometric security system than the basic facial recognition offered on the Note 8, but that device backs this up with iris and fingerprint scanners as an alternative. Ultimately this ends up the same as many iPhone vs Android phone showdowns: the Samsung offers better specs for your buck, but because of the integration and optimisation between hardware and software the actual experience probably isn’t much better, and we find iOS far more user-friendly, as well as a better choice for security and privacy (the latter an important consideration when biometric data is involved).

The iPhone X is Apple’s flagship smartphone, with a radical redesign and high-end specs. But how does it compare to its rivals?

In this comparison we put the iPhone X and Samsung’s Galaxy Note 8 head to head, looking at their design, features, tech specs and value for money. We’ll help you decide whether to buy the Note 8 or the X.

If we manage to help you make up your mind, take a look at our roundup of the best iPhone X deals (you can buy it  direct from Apple), and you can buy the Note 8 here.

The iPhone X is a bold and striking design, something that stands out even more because Apple has been so visually conservative with its smartphones in recent years. The iPhones 6, 6s, 7 and 8 are largely the same, in terms of exterior design; the X is very different.

It has an almost edge-to-edge screen, which means it has a larger screen than the iPhone 8 Plus in a body that’s close to the size of the 8. This also means there isn’t a Home button – its functions have been dispersed around the phone, taken over by gestures and facial recognition and occasionally the power button – and the front-facing camera and sensors have been housed in an odd notch taken out of the top of the screen. (We explain the main gestures in our article How to use the iPhone X.)

It’s a design that takes risks, in other words. In order to make real progress – a bigger screen, a more immersive experience, a step closer to the ideal of a pure interface, a plate of glass with no physical buttons at all – Apple has done things that people might not like. But we like the way it looks.

Of course, edge-to-edge screens became commonplace in the Android world while Apple rested on its laurels for three generations, and the Note is 8 is close to bezel-less itself. There’s about a centimetre of frame above and below the display, while the screen curves right down over the left and right edges.

These curved edges, of course, are one design element that Apple was too cautious to feature in the X. A thin white tab is always visible on the righthand edge, and if you tap it you can pull in frequently used apps and contacts and other quick access options.

Ultimately these are are two very beautiful and modern-looking smartphone designs, so we’ll let you look at some photos and make your own mind up. 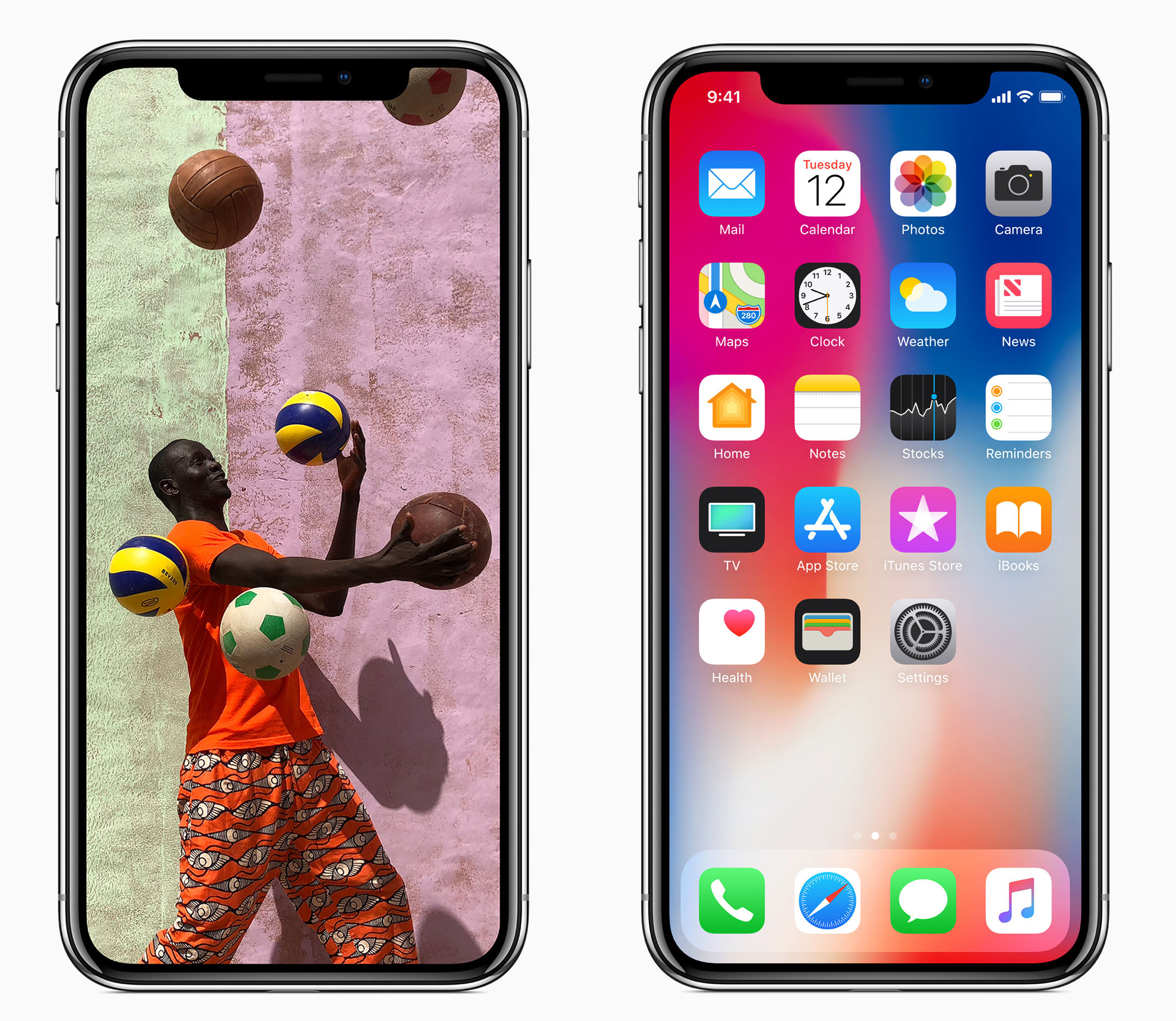 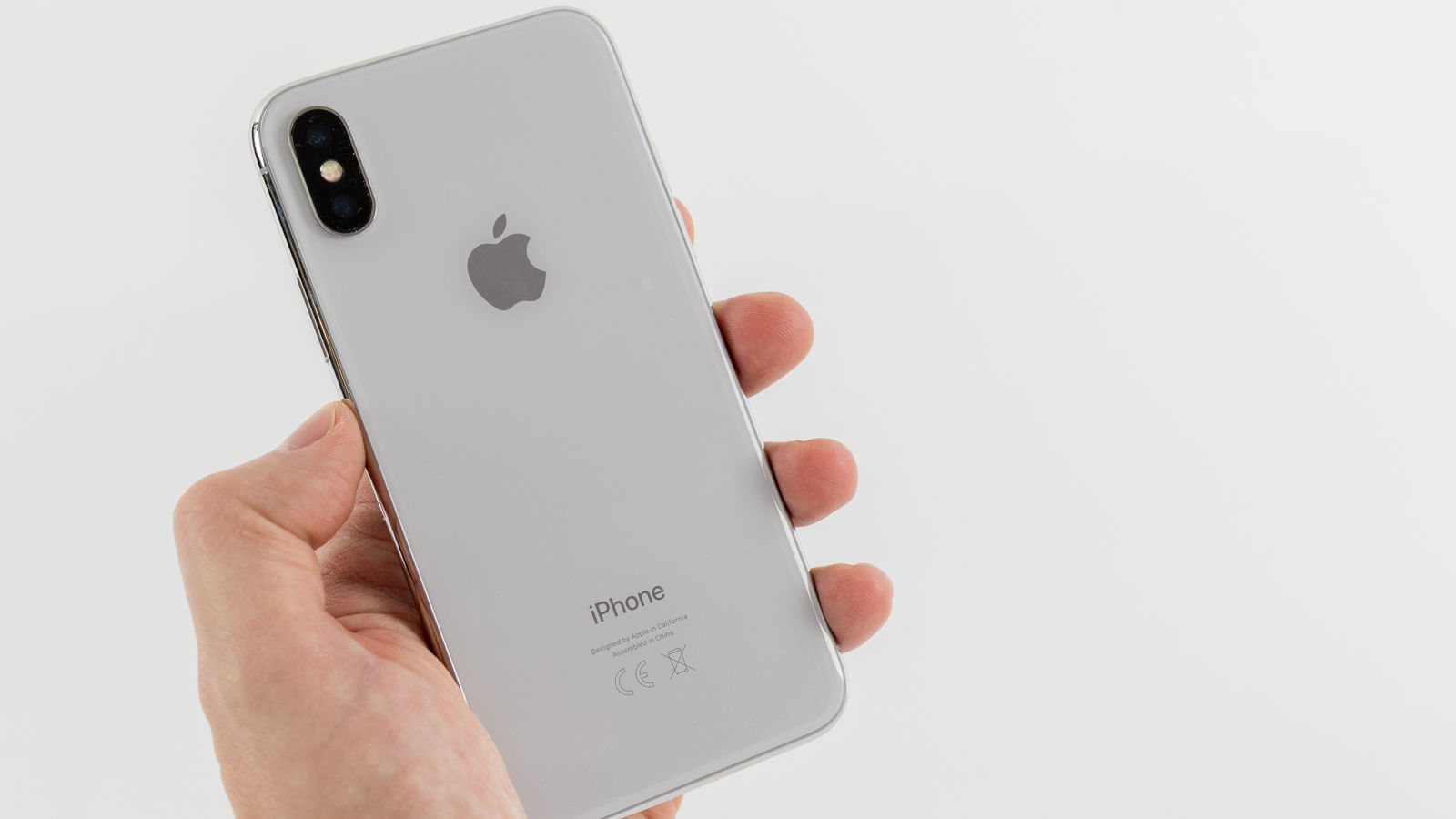 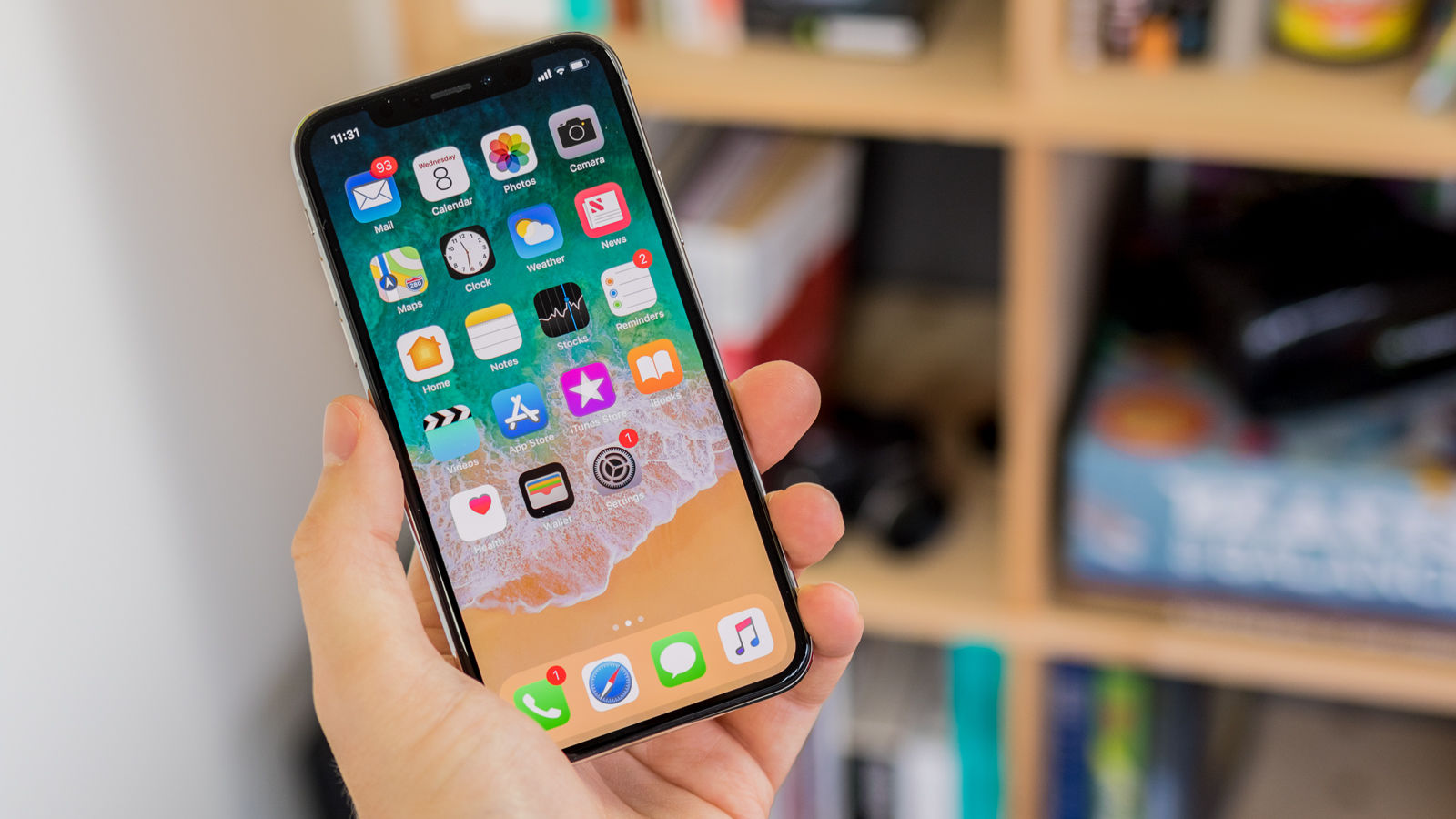 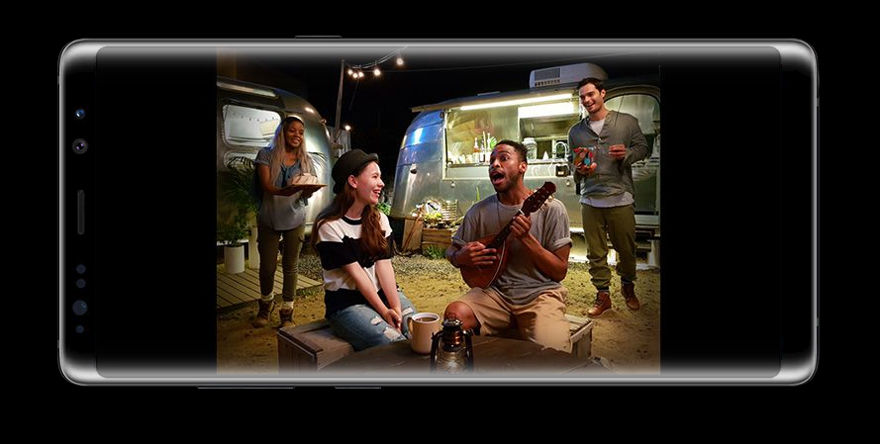 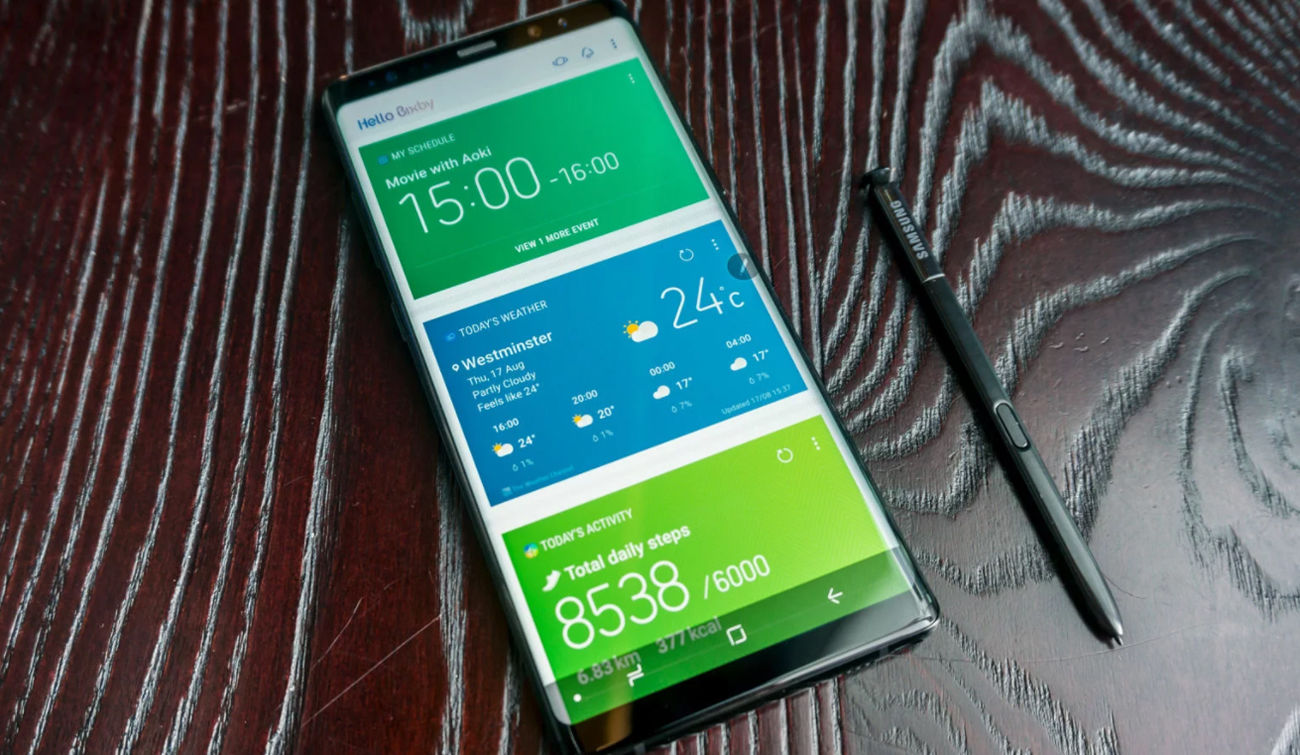 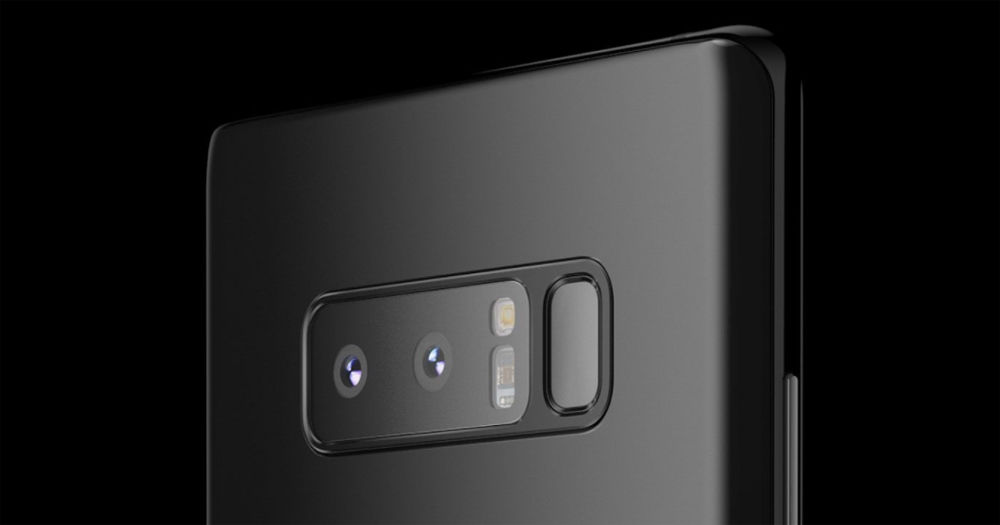 The iPhone X is available in two colours: silver and Space Grey.

As flagship phones both of these devices are stuffed with state-of-the-art features. it’s a struggle to cover everything, but here are the highlights.

The iPhone X and Note 8 offer wireless charging, although in both cases you’ll have to buy the charger separately.

The X is compatible with Qi-certified charging accessories, and Apple has pledged to bring out its own AirPower charging kit in 2018. At time of writing you still need to buy a third-party wireless charger. 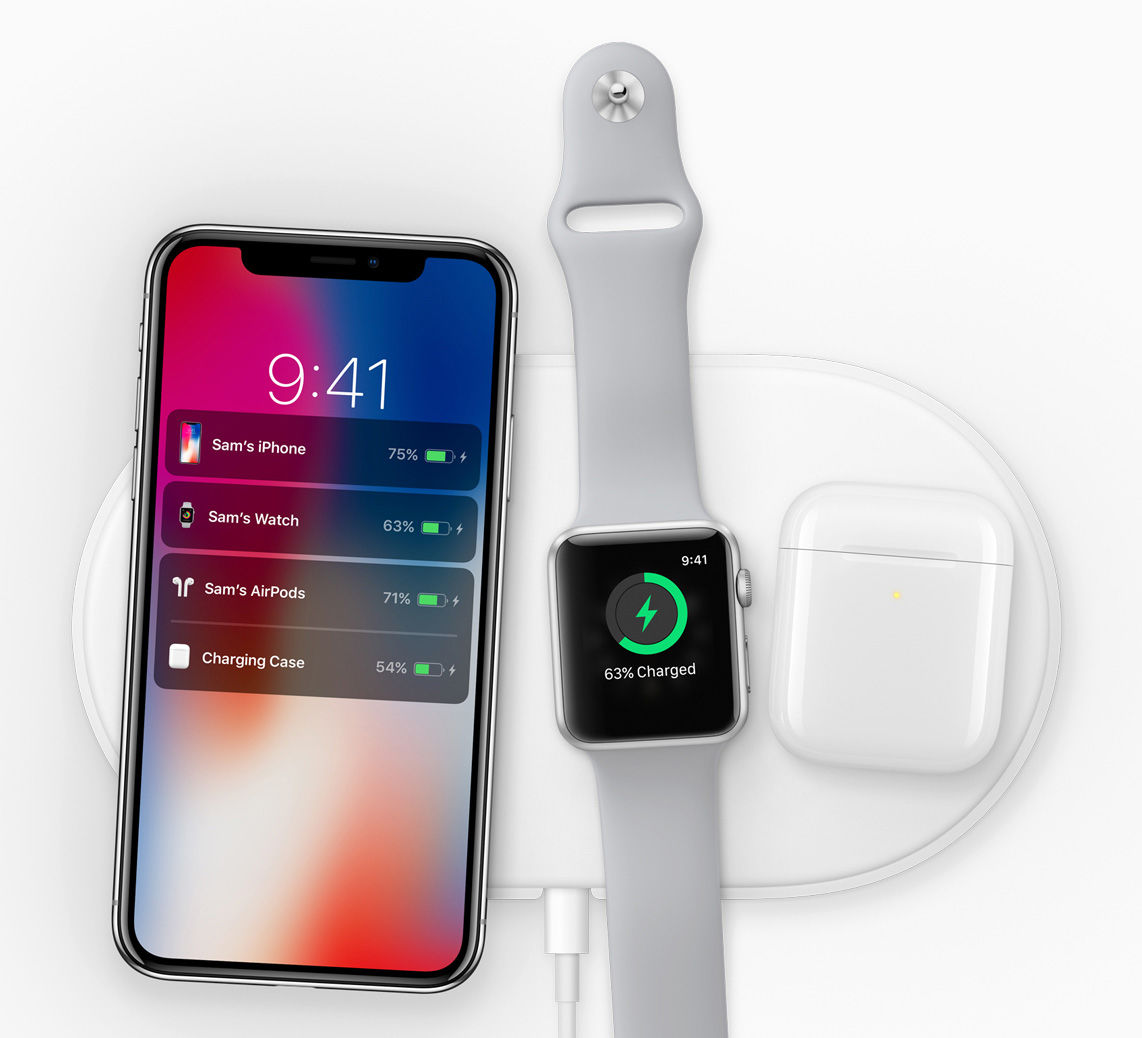 These are Apple features that were introduced along with the iPhone 6s last year.

Live Photos is a neat feature that captures a few seconds of video footage before and after you take a still photo. Then you can use 3D Touch – the ability to either press the screen or ‘force press’ it, because the screen is sensitive to varying degrees of pressure – to make a photo ‘wake up’.

3D Touch isn’t confined to activating Live Photos. You can also use hard presses to see previews of links, use interface shortcuts and more. We’ve compiled a list of the best 3D Touch shortcuts.

The iPhone X’s marquee feature is called Face ID, and is Apple’s replacement for the much-beloved, much-missed Touch ID.

(Touch ID couldn’t be included because it was based on a fingerprint scanner in the Home button, the technology to embed this sensor in the glass of the screen wasn’t available – or cost too much – and Apple didn’t want to put it on the back. It’s possible that Touch ID will return in the future when technology moves on.)

Face ID is a sophisticated facial recognition system that can be used to unlock your phone or authenticate Apple Pay payments. It sounds extremely secure and seems pretty reliable, although it didn’t work the first time Apple tried to demonstrate it. (The company has what seems like a plausible excuse, and it worked flawlessly and repeatedly afterwards.)

We’re looking forward to doing some rigorous testing with Face ID, but for the time being we’ve gathered some first impressions in our Face ID vs Touch ID comparison.

The Note 8 is also well set up for biometric security, with its own (less sophisticated) face recognition and an iris scanner. And it has a fingerprint scanner too: it’s built into the back.

The iPhone X has a dual-lens rear-facing camera, and uses this to offer Portrait Mode, an SLR-style bokeh photo effect that keeps the subject of a photo in focus while blurring the background. It looks great, and we love it. 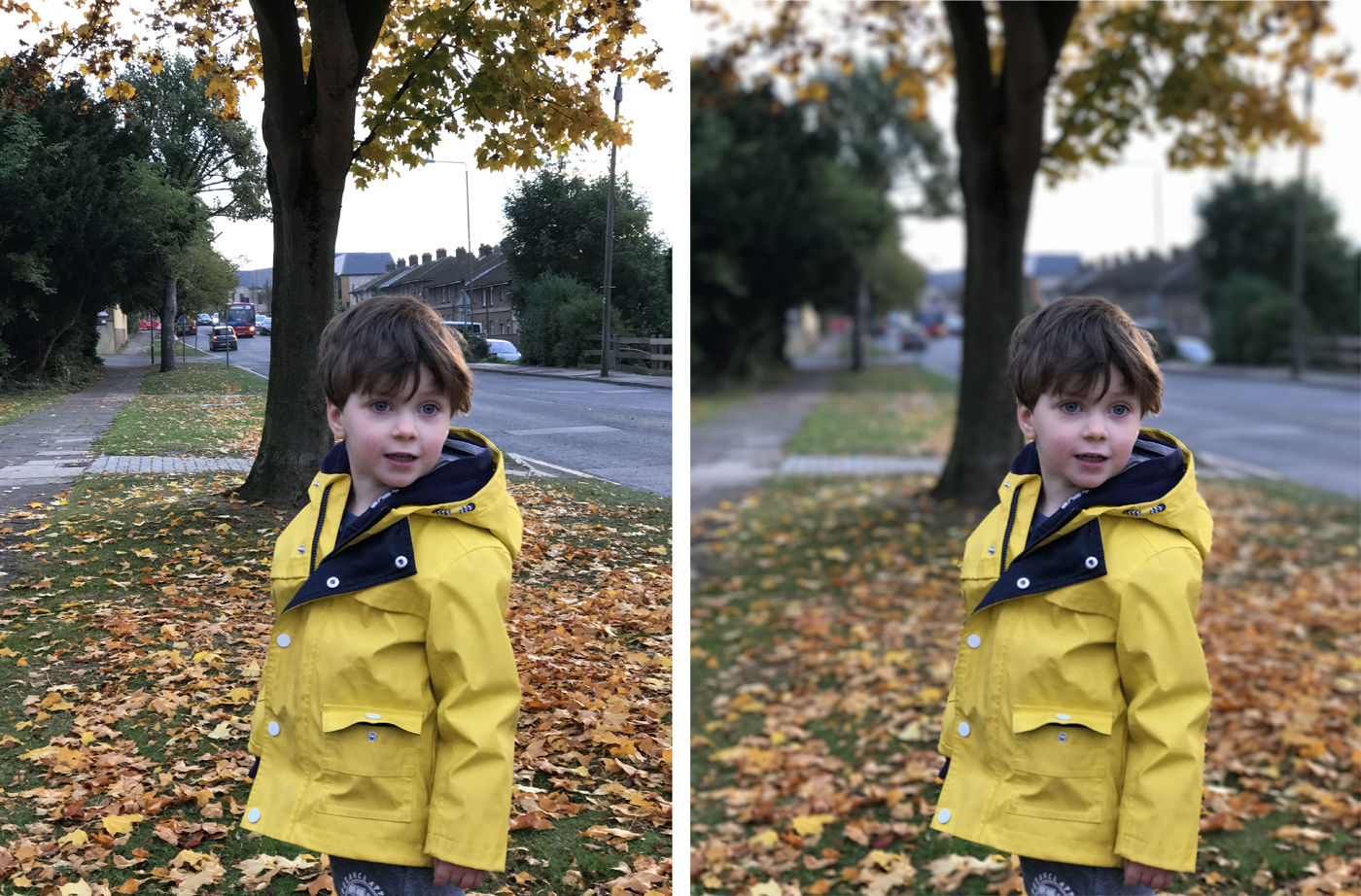 Portrait Lighting is an additional set of lighting effects available within Portrait Mode on the iPhone X (and the iPhone 8 Plus too, but not the iPhone 7 Plus).

There are four additional effects you can apply on top of the standard Portrait Mode: one brightens up the highlights, one darkens the lowlights (pictured below – look at the subtle darkening of the beard), and the last two cut out the subject and put them in front of a dark background. They’re not particularly reliable (the feature is still officially in beta) but occasionally they can produce stunning effects with almost no effort. 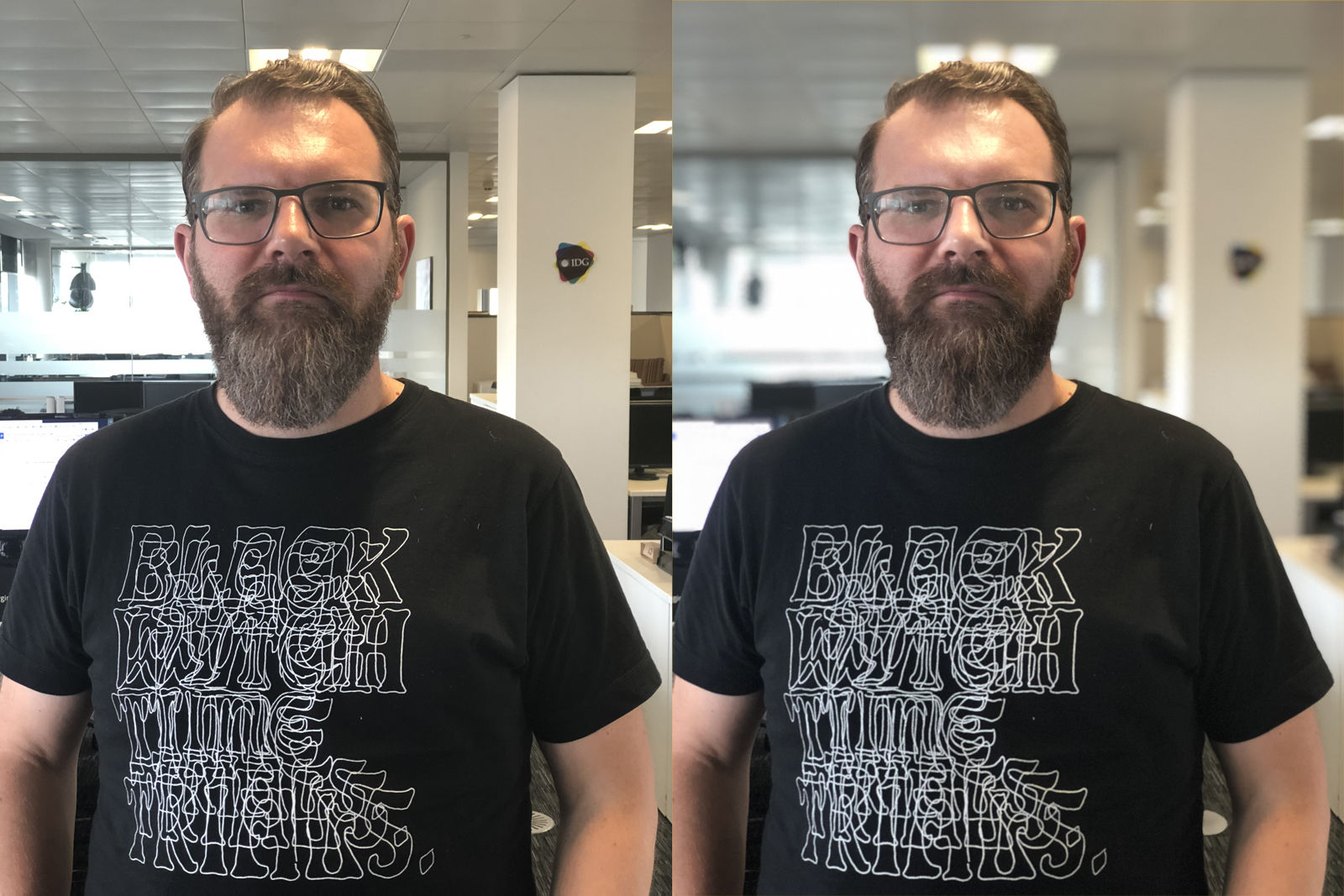 The Samsung also has a dual-lens camera on the back, and its Live Focus feature allows you to add and adjust a bokeh effect after the shot is taken.

Where Apple may have the advantage is that its Portrait Mode bokeh feature is also available on the front-facing camera. We’d like to test this out, however, to see how well it compares to the rear unit’s efforts.

The Note 8 has an always-on display, which is to say that you can see time, date and notifications at a glance without needing to wake the screen fully – a convenient feature. If you’re worried about the effect this will have on battery life you can configure it to be active only during certain time periods.

The iPhone X screen is blank until you wake it or a notification appears. Lift to wake makes it a fairly minor hardship to check the time, but that’s still a point to Samsung.

The iPhone X is rated IP67, which is only one point below the highest common rating and an indication that it is dust-tight and capable of withstanding liquid immersion up to a depth of 1m. But the Note 8 goes one better, offering IP68, which means it can survive beyond a metre.

Another point to Samsung! You can read about IP ratings here.

We’re not huge fans of styluses on phablets but it doesn’t hurt to have the option. The Note 8 has an integrated S Pen stylus that pops out when you tap it.

The iPhone X doesn’t come with a stylus, and while you could buy a third-party model it isn’t compatible with the company’s own Apple Pencil stylus, which is for iPad Pros only.

Like the features, the two phablets’ specs are top-notch. 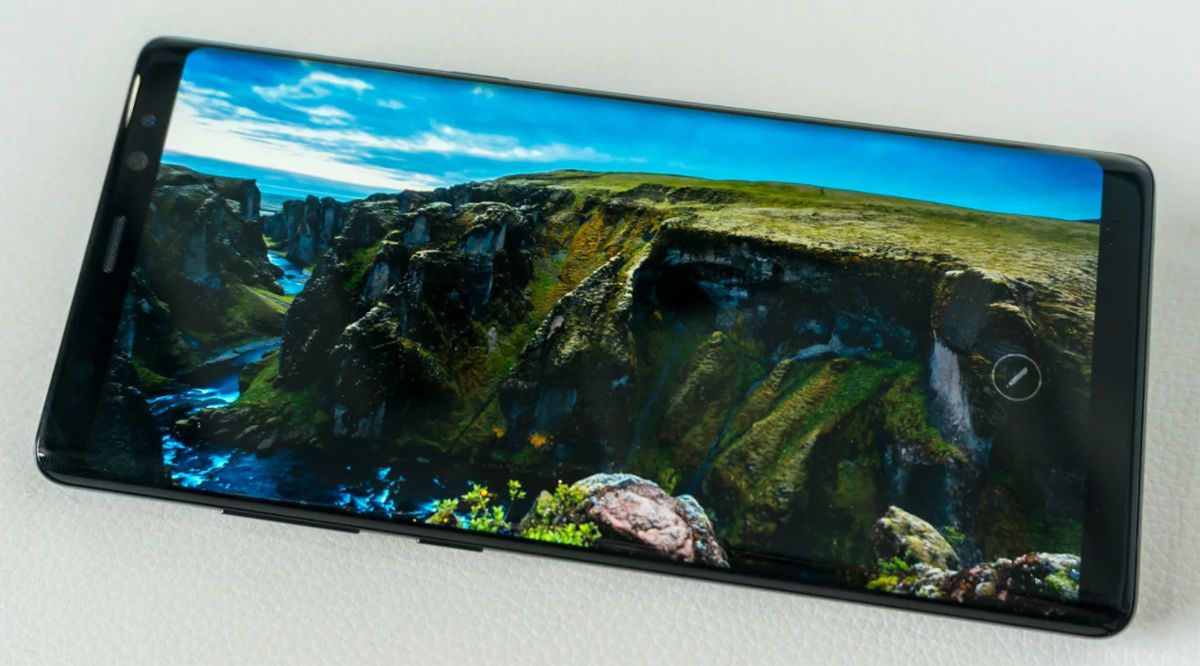 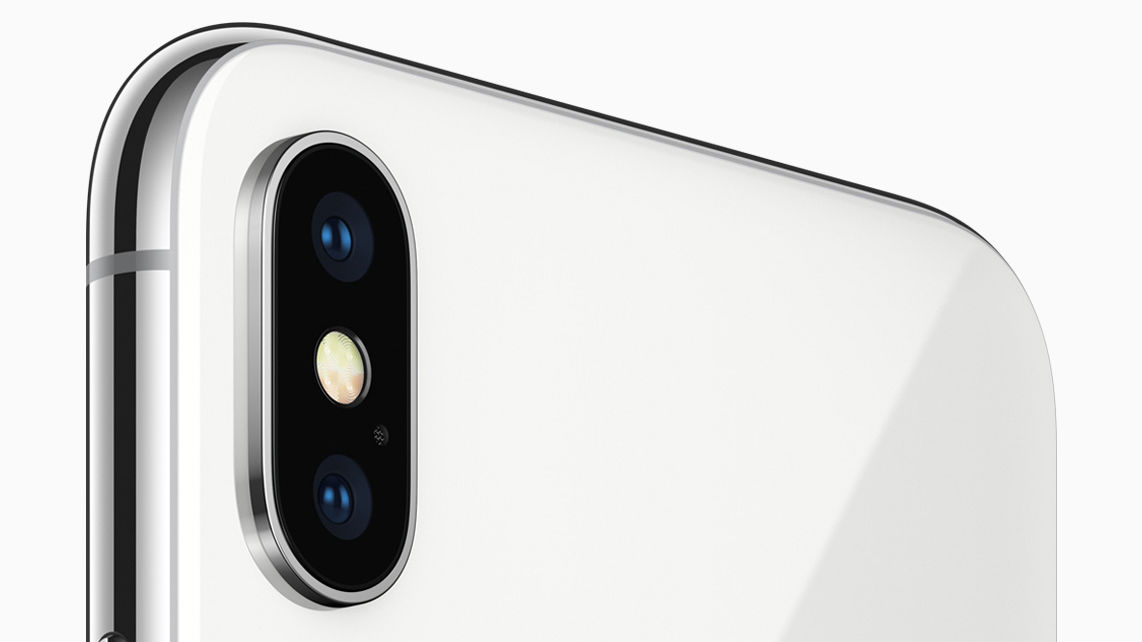 You can buy the iPhone X direct from Apple, or peruse our roundup of the best iPhone X deals.

You can buy the Note 8 here. Many readers, however, will choose to buy it on a contract, and our colleagues on Tech Advisor have rounded up some of the best Note 8 deals.