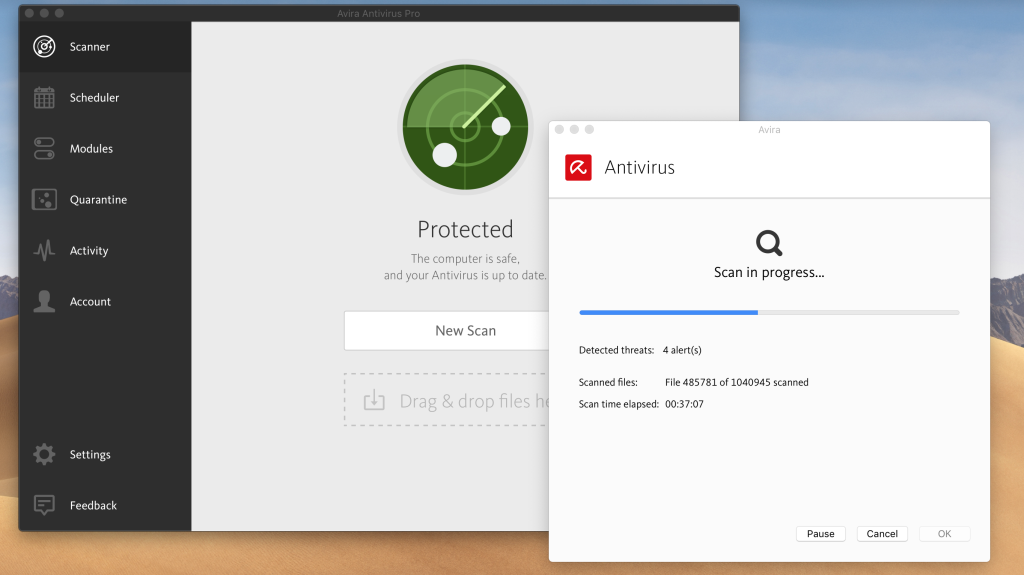 Given the results of our malware tests, and somewhat limited feature set, we don’t feel we can recommend Avira Antivirus Pro. There are simply other antimalware apps with a better clean-up rate for around the same asking price.

Avira has perhaps has the best logo of any antivirus we’ve reviewed: an umbrella. What better symbol to indicate protection against the rainy day of a virus infection? Unfortunately it doesn’t quite live up to it. Here, we review the Aviria Antivirus Pro 2019 for Mac. You’ll find more options in our round-up of the best antivirus for Mac here.

Avira Antivirus Pro costs £29.99/USD$44.99 for a year’s subscription per year for up to five installations, which is among the lowest asking prices we’ve seen for antimalware apps – although that’s only for a single computer. The RRP is apparently £35.88 so watch out for that when it comes time for renewal.

Avira Antivirus Pro’s installation was among the easiest we’ve experienced for an antivirus app, with the installer walking the user through the tedious but necessary steps to enable the kernel module and enable full disk access with just a few clicks and drags. This can be scary stuff for those who don’t understand the internals of macOS, so Avira’s work here is welcome.

Our first test was to run a full scan on our real-world Mac, and it completed in just under two hours. Scans on your own system may be quicker or slower, and we’re testing here to find a score relative to other antimalware apps we’ve tested. However, Avira Antivirus Pro’s speed puts it in the slightly below average bracket compared to other antimalware apps for speed.

When we tried a second scan a little later, it again took a similar length of time. It appears Avira Antivirus Pro doesn’t contain the same technology we’ve seen in some other antimalware apps whereby they know what files haven’t altered since the last scan. This can massively speed up scan times.

During the scan, macOS’ Activity Monitor reported around 80% of one core utilised, and between 30-70% of three other cores of the eight virtual cores in our i7 2.8GHz Mac. If you’re undertaking an intensive task at the same time – like gaming or encoding video files – then you might feel the impact.

Rather worryingly, Avira Antivirus Pro didn’t automatically update its virus definitions when first installed, or upon running the first all-important system scan. We were using definitions that were four months old.

Updating can be done using an option on the menu that appears when you click the menu bar icon. As long as you remember to do this before undertaking any scan, you’ll be fine – although several other antimalware apps update their virus definitions automatically and invisibly, so the user hasn’t even think about it.

However, Avira’s Protection Cloud feature might mean this doesn’t matter to a greater or lesser degree. This uploads digital fingerprints of any “executable suspicious file” to the cloud for analysis (although the support document only references Windows program types). The cloud antimalware definitions are always up-to-date, so there might be less reliance on having local versions.

But even with Protection Cloud, the results when unleashing the 26 recent malware samples on the system was disappointing. Avira Antivirus Pro didn’t detect Adwind, DarthMiner, or WireLurker. It missed LamePyre when it was placed on the system, although caught it when we attempted to run the app that contains the malware.

The VirusTotal database shows that Avira claims to catch all three of those it missed, so this could be peculiarities with our particular samples of this malware – although we note that other antimalaware apps detected them just gine.

However, there’s no getting away from our conclusion that this is the amongst the worst results we experienced while reviewing antimalware apps.

Additionally, the pop-up alerts that told us malware had been detected and cleaned were too basic, saying only “Detections handled” and referring the user to the log file to learn more. We want such pop-ups to be reassuring and illuminating, telling us exactly what’s happened – and what action has been taken.

The log file then referred us to the quarantine section of the app, where we could learn where the detected malware existed on the disk and choose to delete it permanently. It felt a lot like we were digging within the app to find important information. Why hide this away?

This lack of information extends to the Avira online account, that claims to let you see details of scans, updates and security events on devices or computers on which you’ve installed Avira Antivirus Pro. Unfortunately, with our testbed setup this didn’t work, with the space where the info should’ve appeared saying simply, “No new events”.

The online account also offers a Digital Health feature to report about the security, performance and privacy of your computers. Unfortunately, it only works with Windows computers.

Although Avira makes other computer security products, when it comes to Avira Antivirus Pro you really do get what it says on the tin – always-on and on-demand malware protection. Unlike with some other antimalware apps, there’s no extras thrown-in. A rather cheeky switch in the Modules section of the configuration panel marked Firewall made us think that perhaps there was such a tool built-in. Alas, this just switches on and off the Mac’s own built-in firewall.

Still, there’s some notable features. You can switch on and off the scanning of USB drives upon insertion, for example. Because this can sometimes delay the user being able to access the files on the USB storage, some people choose to turn it off.

Given the results of our malware tests, and somewhat limited feature set, we don’t feel we can recommend Avira Antivirus Pro. There are simply other antimalware apps with a better clean-up rate for around the same asking price.