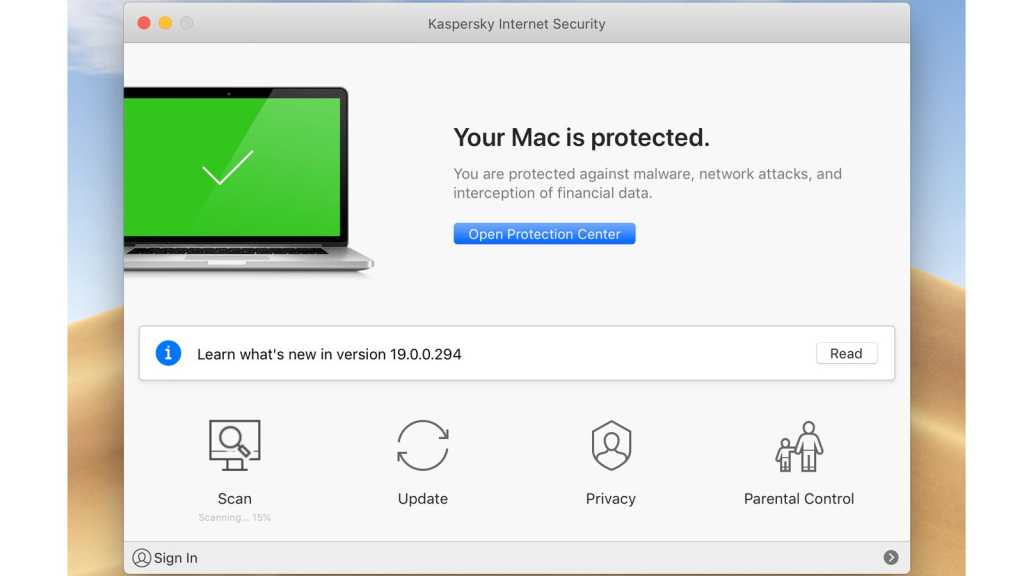 Kaspersky is a big name in the security industry, and the perfect detection rate is reassuring. There are some genuinely useful add-ons within the app, too, such as webcam protection and some of the best parental controls in all the Mac antivirus we’ve tested.

Kaspersky Internet Security for Mac originates in Russia, which could raise concerns as the news suggests that quite a lot of cybersecurity threats originate there. However, perhaps it makes sense to tackle them using an antivirus app that originates there too. Here, we bring you our full review of Kaspersky Internet Security for Mac to help you decide if it’s the right antivirus option for you.

Kaspersky Internet Security is £34.99/$34.99 per year for one device, and available to buy here. This contains additional features like privacy and online payment protection, and if you want just the virus scanning then Kaspersky Anti-Virus is available for £24.99/$24.99 per year. (You’ll find more antivirus options in our round-up of the best antivirus for Mac).

Installation of Kaspersky Internet Security asked us to agree to no fewer than four lengthy license agreements, totaling around 15,500 words. That’s an hour’s solid reading at average speed.

As installation finished, Kaspersky Internet Security requested complete control over System Preferences, something which none of the other antivirus apps did. Granting any app full control of the central configuration tool for macOS alarms us. We’re unsure it’s necessary.

We were then prompted then to install the all-important kernel module that allows system scanning, which was made easy thanks to arrow annotations applied to the System Preferences program window showing exactly where to click.

Upon opening the program window after installation, we were advised to open the Protection Centre, a central component of Kaspersky Internet Security in which notifications and advice are displayed. Among other things we saw that “Application databases will be updated soon”. Why the delay? Other antimalware apps we’ve reviewed automatically and invisibly update.

To be clear, Kaspersky does automatically update – eventually. But in this instance, we clicked the Update button, and a moment later were prompted to restart the Mac. Again, why was this necessary? Does the user really have to reboot each time the malware definitions are updated?

Once back up and running, we ran our first test – a full scan of the system. This is an unscientific but hopefully a relative measure of scanning speed compared to other antimalware apps.

The scan took just 30 minutes to complete – although you might find scans take less time, or longer on your Mac. This is impressively rapid for such an well-used Mac system, and in terms of scan speed matches the other fastest we’ve seen—Intego’s 25 minute full system scan.

It comes at a price, though, which is a hot Mac that’s working hard. During the scanning, Activity Monitor showed that 60-80% of four cores of our i7 2.8GHz Mac were typically occupied, and the fans were blowing loudly throughout.

A nice feature of the scan was that, in order to examine their contents, Kaspersky Internet Security prompted us to type the password for some password protected zip files that were on the system. Kaspersky is the only antimalware app we’ve seen that does this, and it’s a welcome feature. There’s an option to simply skip these zip file(s) if you wish. However, be aware that the scan is halted until you respond to this dialog box. This means you can’t leave the scan to run unattended. There appeared to be no way of turning off password-protected archive scanning.

Notably, a second full scan run a little later didn’t complete any more quickly than the first, so it appears Kaspersky doesn’t include the clever technology of some antimalware apps we’ve seen wherein files that haven’t changed since the last scan aren’t scanned – which speeds-up the scan significantly.

We entered a twilight zone when we began to unleash our 26 recent malware samples on our virtualised testbed setup, in order to test Kaspersky’s always-on protection. We placed the first on the disk and… nothing happened. We waited 20 seconds and then, suddenly, the malware disappeared from the Finder window. A growl sound effect was heard (maybe a lion or tiger?), and a notification appeared saying the malware had been deleted.

Some of the subsequent malware samples we unleashed were spotted and eradicated more quickly, but an average 10-20 seconds wait was the norm before Kaspersky Internet Security seemed to realise malware was present. To be blunt, we worry that somebody might be able to activate the malware in the gap between it landing on the system and Kaspersky Internet Security responding.

This lack of notification happened seemingly randomly in other of ours tests. Sometimes we placed malware on the disk, and it vanished with no notification or sound effect.

Kaspersky didn’t catch all the malware samples either. It missed ColdRoot, DarthMiner, LamePyre and Shayler. Somewhat incredulous at this poor showing from such a well-known name, we checked its log file to confirm this was indeed the case. We then checked the VirusTotal database and found that Kasperky claims to detect all four, so this might be peculiarities with our malware samples, but do note that other antimalware apps detected them just fine.

In more recent tests conducted by AV-Test in November and December 2019, Kaspersky successfully detected and prevented 145 malware samples from infecting a test machine, indicating that there had been some issue with our tests and that you should, in fact, be able to rest assured that Kaspersky has your back.

Some powerful parental control tools are built in that, as well as blocking websites and imposing usage time limits, can let you know when children share personal details online, such as phone numbers. You can also limit what sites children can visit and even what sites appear in Google search results.

The webcam can be deactivated using Kaspersky Internet Security, to avoid the possibility of any hackers looking in, but this feature is either on or off. We’d like to see app-by-app control so that we can allow Facetime, for example, but nothing else.

A VPN tool is included in the deal, although this must be installed separately via the Mac App Store and is limited to 300MB of data per day once you link it to your subscription. A password manager comes supplied too.

A browser plugin is supplied that among other things offers Safe Money, which is designed to protect online banking. It does this in a variety of ways, such as blocking screenshots, and checking to ensure the URL is valid and not fake.

These add-on tools add a lot of real value to Kaspersky Internet Security, and at £34.99/$34.99 for a year’s subscription the price is reasonable.