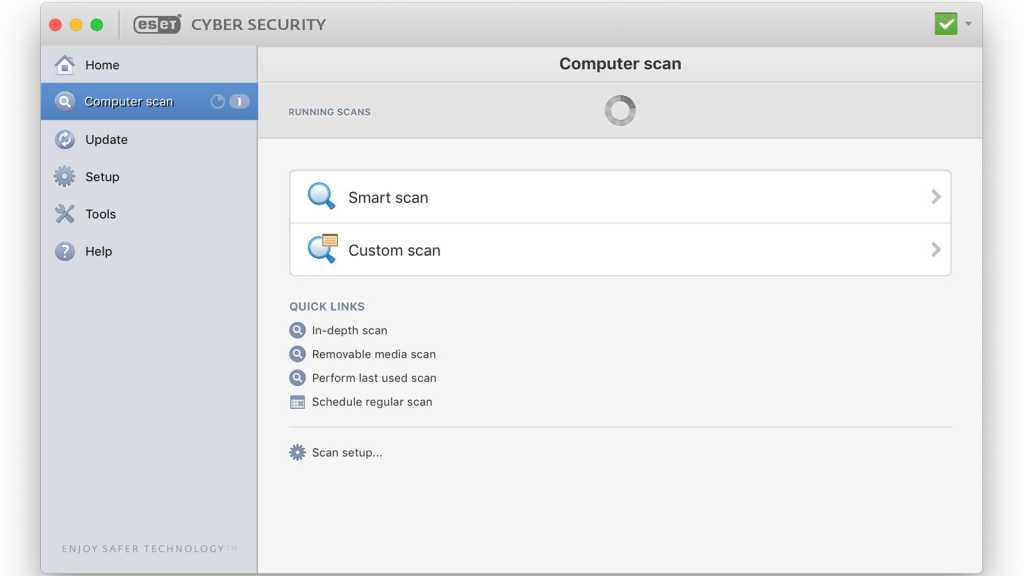 There’s a lot to like in ESET, including its good virus detection and clean-up rate, but scans are very slow and there are some add-on features missing. That said, its price and elegant simplicity might sway you.

ESET is one of the oldest antivirus companies around, with the Slovakian company’s first antivirus software hitting the market in the late 1980s. In fact, for several years in the early part of this century ESET was one of Slovakia’s biggest companies. Here, we take a look at its latest antivirus offering in our ESET Cyber Security review.

With an asking price of £29.99/USD$39.99 per year, ESET Cyber Security is among the most competitively priced offerings we’ve looked at – although that’s only for one Mac. Other antimalware apps let you defend several computers for the subscription fee. You can see those in our round-up of the best Mac antivirus.

You can sign up to ESET on its website, and if you want to add more devices and more years onto your subscription you can do so at checkout, but they will of course add to the price. If you’re simply looking for cheap antivirus, take a look at our round-up of antivirus deals.

Installing ESET Cyber Security involved answering a few questions. First, we were asked if we wanted to join the ESET LiveGrid feedback system. This lets ESET improve detection for everybody by having your computer send it dodgy files that might be malware. There could be privacy implications here, of course, hence the option of joining.

Next, we were asked whether we wanted ESET Cyber Security to detect PUAs – potential unwanted applications. These are apps that are considered by some to break various rules. Perhaps they’re too heavy with their advertising, or perhaps they’re essentially poor-quality apps that are driven more by marketing than by their usefulness.

Alas, while these questions are welcome, the rest of the installation was a let-down. There’s no guidance other than a handful of steps described in a brief dialog box and an online support page for installing the necessary kernel module that’s required for always-on scanning. Step-by-step guides are needed.

Upon running for the first time ESET Cyber Security instantly updated its definitions, which is something that should be mandatory for all antimalware apps – but sadly isn’t. We turned on the Removable Media Blocking feature here too.

The full system scan took one hour and 45 minutes to complete. The scan showed about a fifth of the progress bar was filled straight off, which felt a little deceptive. CPU usage was light during the scan, at around a quarter of one of the CPU cores, and maybe 10% of three other cores. Sometimes this rose slightly but not enough to trouble the system, so users will not be made aware a scan is running.

It seemed ESET are aware of how long scans take because on option in the app’s preferences dialog box is to shutdown computer after scan.

A second full scan took as long as the first, so there’s probably no clever caching system that lets some antivirus apps know which files haven’t changed, and that therefore don’t need to be scanned afresh.

Unleashing the 26 malware samples onto our computer showed that ESET Cyber Security caught nearly all of them, with the exception of Adwind. VirusTotal reports that ESET should catch this malware, which might indicate a peculiarity with our malware sample – although we note that most other antimalware apps caught it just fine.

The alert notifications that appeared were informative, telling us where the malware was and what had been done with it (typically deleting the file). However, they disappear after just a few seconds, rather than waiting for the user to click a Close or Okay button. Users might miss them.

Some interesting technologies are used to provide protection beyond just files. For example, ESET Cyber Security scans emails by automatically intercepting incoming and outgoing messages in the background, which should mean it’ll work with all mail clients without any need to set anything up. It’s bit like having a security guard between the email server and your Mac, who checks everything before letting it through.

Similarly. ESET Cyber Security sits between the web browser on your Mac and the Internet. Again, this means all web browsers are protected and don’t need to be specially configured via a plugin or extension. We tested this by trying to download some malware samples and, sure enough, we were blocked – the page showed as unavailable. ESET Cyber Security showed a notification that the download had been dangerous.

The configuration panel for ESET Cyber Security is amongst its best features, and you can configure just about every aspect of how the app works. For example, you can control exactly when the real-time protection scans the files – when you open them, when you attempt to execute them, and when you create new files. All three are switched on by default, but this is just one example of the fine-grained control you get. This might help avoid problems with certain Mac system configurations, or problematic files.

The virus clean-up and detection rate is very good, although the scanning speed is sadly on the slow side and the lack of add-on features, such as ransomware protection, is a little disappointing. However, there’s ultimately an elegant simplicity to ESET Cyber Security that we like and we therefore can’t help but recommend you at least include it on your shortlist.