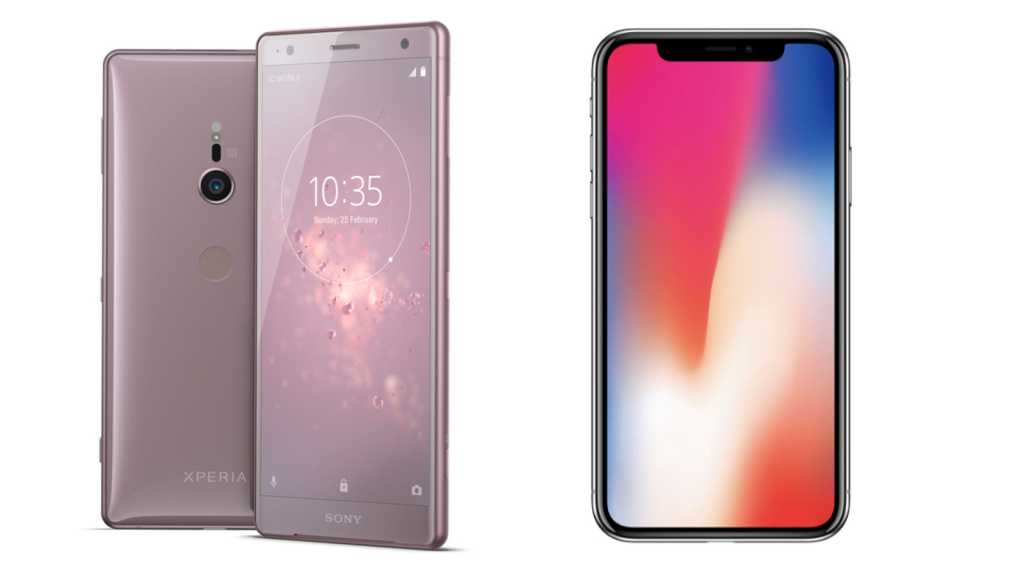 The Sony Xperia XZ2 is out at the end of March, so we will hold off on our conclusion until then.

Sony’s new flagship phone – the Xperia XZ2 is coming at the end of March. It’s a big change from the previous generation model, but is it a big enough change to take on the iPhone X? We investigate…

(For a comparison with a cheaper Apple phone, see iPhone 8 vs Sony Xperia XZ2.)

The Sony Xperia XZ2 was launched by Sony on 26 February 2018, although it won’t be available until the end of March.

Apple’s iPhone X has been available since November 2017. By the time the Xperia XZ2 is on sale the iPhone X will have out for five months and everyone will be waiting for news of the successor to the iPhone X, due out six months later in September 2018. Read our review of the iPhone X here, and our predictions about the features the 2018 iPhone might include here.

The XZ2 is showcasing Sony’s new design language that it refers to as Ambient Flow. That basically means Sony is avoiding straight lines and bringing curves to the handset – including 3D curved glass that gives the front a subtle curvature while the back has a noticeable bulge. Whether this appeals to you is likely a matter of taste – it strikes us that it would make a phone wobbly when placed on its back, but maybe that wouldn’t concern most people.

Sony is using Gorilla Glass 5, so it should be relatively scratch and smash proof, but it’s all too easy to smash the glass on any phone that has glass front and back – as some unfortunate owners of the iPhone X have already discovered. Glass front and back is something that the iPhone X and the Xperia XZ2 have in common – and both phones use the same Gorilla Glass 5 so it is unlikely that one is more durable than the other. If anything, the fact that Sony’s handset bulges a bit at the back suggests to us that it may be more likely to smash if you drop it. Of course we haven’t been able to run any tests yet. 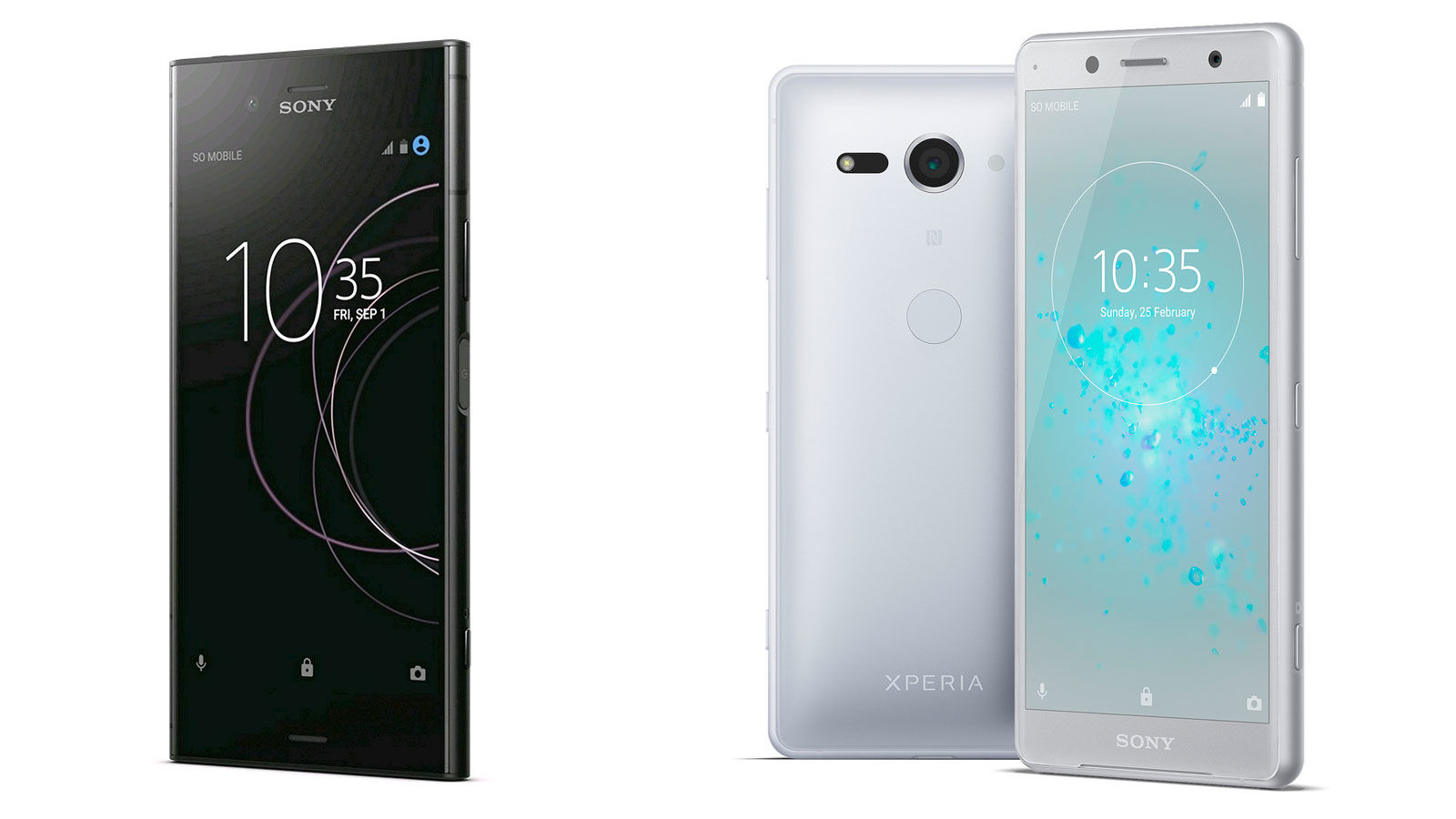 While there is no denying that the new XZ2 looks a lot more modern than its predecessor the XZ1, with it’s curved sides, slimmer bezel and 18:9 display – dimensions it shares with many of the current flagship phones – we don’t think its refreshed looks are enough to take on the iPhone X.

While the bezel is smaller, it’s still one of the largest out there – and it’s much bigger than the bezel on the iPhone X, even with the iPhone X notch taken into consideration.

Another design difference distinguishing the XZ2 and the iPhone X are the colour options. The XZ2 will come in Liquid Black, Liquid Silver, Petrol Blue (in the US it will be known as Petrol Green) and Ash Pink (ash pink makes us think of funerals, so we’re not so sure of that one).

In terms of features, how do the new flagships compare?

Another change to the design of the XZ2 compared to the XZ1 is obvious if you look at the back of those handsets. – the camera and fingerprint sensor are found in the centre of the newer phone’s rear, previously the fingerprint scanner was on the side of the phone.

Obviously this is a major difference between the iPhone X and the XZ2 – the iPhone X has forgone Apple’s popular fingerprint scanner technology Touch ID, switching to Face ID instead. Face ID identifies you by 3D scanning your face and the iPhone will be unlocked if it recognises you. Incidentally, the Sony phone offers a 3D scanning feature from the front facing camera, but that isn’t capable of any facial recognition.

The Sony Xperia XZ2 display is 5.7in (14.48cm) measured diagonally, while the iPhone X display is 5.8in (14.73cm). That’s a very minimal difference, but a quarter of a centimetre might be significant to you.

Like many of the other flagship phones out there, the Xperia XZ2 display has an optical ratio of 18:9. The iPhone X has an unusual but similar Apple 19.5:9 ratio. While the 18.9 optical ratio has become popular for smartphones, it’s different to the 16:9 standard used for TV (which the iPhone 8 shares with many other handsets), and the cinematic 21:9 aspect ratio. This may matter to you if you watch a lot of movies and TV series on your smartphone (you’ll either see black bars or you won’t see part of the picture).

As for the quality of the display. Apple refers the iPhone X display as Super Retina, which equates to 2436×1125-pixel resolution at 458 ppi. It’s an OLED screen that offers stunning colours, true blacks, high brightness, and a 1,000,000 to 1 contrast ratio.

Both the Sony XZ2 and the iPhone X offer HDR (High Dynamic Range) which means they support a broad range of dark and light areas – so photo and video should look better. Essentially, you’ll be able to see more in the darker areas in films.

Speaking of films and other content, the Sony XZ2 uses the same HDR upscaling technology used by Sony’s Bravia TV to upscale content for a better viewing experience. The XZ2 can take any video and upgrade it to HDR as you’re watching it.

The iPhone X, 8 and 8 Plus only have an IP67 rating, that means that they are fully protected from dust and can withstand being submerged in 1m of water for up to 30 mins.

On the other hand, the Sony Xperia XZ2 offers IP68 waterproofing, which Sony said means that the XZ2 should be able to withstand being submerged in 1.5m water, for up to 30 minutes.

Since we doubt you’ll be taking your phone swimming, we don’t think this is a dealbreaker, but if you spend a lot of time near water, you might want to get the more water-proof model.

In terms of the sound coming out of the phones themselves. The Sony Xperia XZ2 Audio is decent thanks to its 20 percent louder (compared to the previous generation) front-facing S-Force Front Surround speakers. It also offers support for high resolution audio with DSEE HX upscaling, and enhanced Bluetooth LDAC for High-Resolution Audio when listening over earphones or wirelessly.

The iPhone X has onboard stereo speakers that are louder than previous generation iPhones.

Until we can judge both phones side by side we will hold off making a comparison in terms of sound.

The rear-facing camera on the iPhone X is 12MP, but it features two lenses – a wide-angle at ƒ/1.8 aperture, and a Telephoto with ƒ/2.4 aperture. You also get optical zoom and a digital zoom up to 10x.

The XZ2 is the first smartphone capable of recording 4K HDR video footage in HLG (Hybrid Log Gamma) format. It does so using its Motion Eye camera. There is also 960fps super slow motion video, now available at 1080p (up from 720p).

The front facing camera on the iPhone X – known as the TrueDepth Camera – powers the 3D facial scanning that makes FaceID possible as a way to unlock your device. It also brings fun Animoji characters to the iPhone, if you are into that sort of thing.

The camera on the XZ2 also supports 3D scanning of objects and faces – which you can use to create avatars.

One benefit of the XZ2 is the fact that you can add up to a 400GB memory card via the microSD slot – perfect if you are likely to shoot a lot of HDR video. The iPhone has no option for extra memory, so you would have to pay more to get the 256GB iPhone X.

A major difference between both phones is the software they ship with. The Xperia will ship with Android 8 Oreo – although Sony tends to give it its own skin and populate it with Sony’s own duplicate apps.

There’s also Xperia Assist software, which is designed to the user discover the phone’s features. A little like the iPhone Tips that sometimes pop up on an iPhone.

Dynamic Vibration System will make the XZ2 rumble along while you are playing movies, music, and games – which might work with games, but we’re not sure we’d want rumbling while we were watching movies on the device.

The Dynamic Vibration System is a little like the iPhone’s Haptic engine.

The iPhone X ships with iOS 11, and when it launches later this year you’ll be able to update it to iOS 12. You can read about iOS 11 here.