Skip to content
Home / Apple / Reviews
Computerworld
At a Glance

Apple is rarely the first to a market, and never the cheapest, but frequently the best. And we’re looking forward to the company’s take on the wireless charger concept. The design looks as simple and lovely as we’ve come to expect from Apple, while the multiple-device setup and intelligent charging features will be fantastically convenient for households with recent iPhones, Apple Watches and AirPods (although you’ll need a new case for the latter). As well as being an appealing product in its own right, this will instantly make the iPhone 8, 8 Plus and X better options too – not to mention all the other Apple products that will be compatible with AirPower.

The late-2017 iPhones were a mixed bag: the iPhone X is a radical rethinking of the product’s design and features, but the 8 and 8 Plus were very minor – almost slavish – iterations on the three-year-old iPhone 6 design. But one new feature that’s common to all three is wireless charging.

Right now – and very unusually for Apple – if you want to charge your iPhone wirelessly you have to use a charging pad made by another company; the 2017 iPhones don’t come with one in the box. But that will change soon. Apple has announced the imminent launch of AirPower, its own wireless charging device, which we discuss in this preview article.

We’ve not got our hands on an AirPower mat yet, but we’ve seen what they look like: 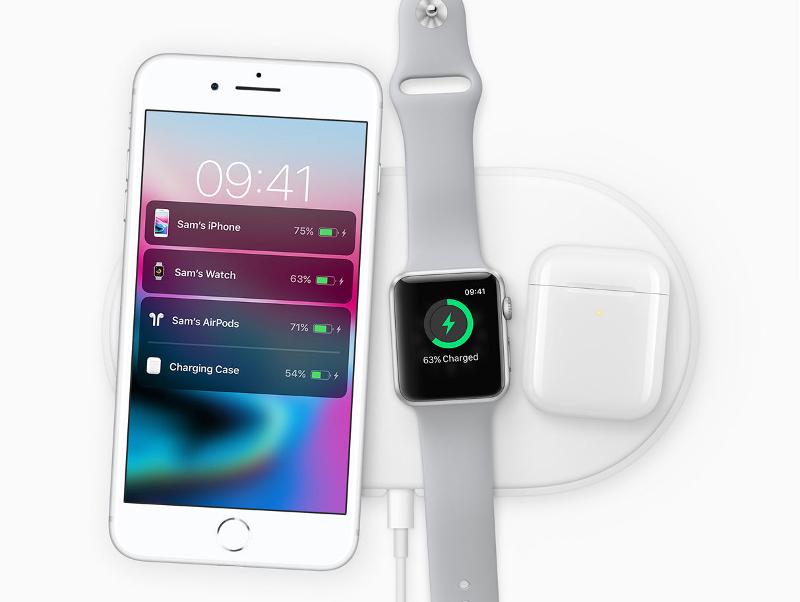 The design is classic Apple and immediately identifiable as such, with its pared-down, minimalist style. Looked at from above there are echoes of the Apple Watch charging pad and the absolute simplicity of that white disc.

It’s a larger mat than most because it’s designed to charge more than one product at once – and can do so intelligently, as we’ll discuss in the features section. We also suspect that its largeness will be a benefit when putting fewer than three devices on there at once, because you won’t need to be as accurate about finding the ‘sweet spot’.

Which products can the AirPower charge?

AirPower can charge your iPhone, provided it’s one of the glass-backed models: the 8, 8 Plus or X.

It can charge an Apple Watch, but only the Series 3, as we understand it. We’re not sure why the others are excluded, since they all support inductive charging.

Finally, it can charge your AirPods, provided they’re in a new AirPods wireless charging case. This will be released in due course, most likely at the same time as the AirPower itself.

Note that you don’t need to use a case with the iPhone or Apple Watch, which all have wireless charging compatibility out of the box. You just pop them on the mat and charging starts.

iPads aren’t compatible with AirPower at present (Apple would need to release new models with glass backs, which seems impractical), and neither are any currently available iPods, Beats headphones, MacBooks or other Apple products.

It’s possible that non-Apple products will be compatible with the AirPower mat, too – Apple has discussed adding general Qi support to the device which would mean that any Qi-certified product could charge from it. But that hasn’t been confirmed yet.

It’s nice enough that the AirPower mat will be able to accommodate three devices at once, and can deal with different kinds of device too. But Apple has also stated that it will then charge those devices intelligently, in the most power- and time-efficient manner possible.

For one thing, AirPower knows how much charge each device has at the moment, and how much it can potentially hold – it determines these things as soon as you place them on it. And it allows compatible devices to communicate this information with each other. It can therefore prioritise the amount of power each device ‘takes’.

At the launch, Tim Cook said: “The system has a great interface. They intelligently work together and communicate with each other to manage the charging through one more efficient charging system. This is not possible with current standards, but our team knows how to do this.”

The current charge of all devices on the AirPower mat is displayed on the iPhone being charged.

Like the first Apple Watch and the new Mac Pro, AirPower has had a prolonged launch: it was announced alongside the iPhone X in Sept 2017 but as of early March 2018 there still isn’t a confirmed release date, although we know it’ll be some time this year.

(Tim Cook is a logistical genius, and Apple likes to unveil a product and then get it on shelves within a week or two. Exceptions to this are generally because the company needs to publicly apply for FCC approval of an entirely new product category, so the information would emerge anyway; or because customers are getting restless and it wants to reassure them ASAP, which was the case with the iMac Pro and Mac Pro.)

The next two Apple events, and therefore likely dates for the release, are spring (probably March) and WWDC (in June). An Apple Post report points to March, citing an undisclosed source with their own apparent source at Best Buy, and this has been backed up by the Japanese-language site Mac Otakara and its sources in the Asian supply chain. We’ll update this article when we’ve got a firm date.

At time of writing, Polish retailer X-Kom is listing the AirPower pad for 999 Zloty: does this site know something we don’t? (At current rates that’s about £214 or $296, although Polish blog ThinkApple notes that many products costing 999 Zloty on the site are $199 in the US.) Frankly, it’s far more likely that this is simply a placeholder until official pricing is confirmed.

Still, it’s a reasonable (albeit costly) estimate to start with: somewhere in the £200/$200 range is what we’re expecting.