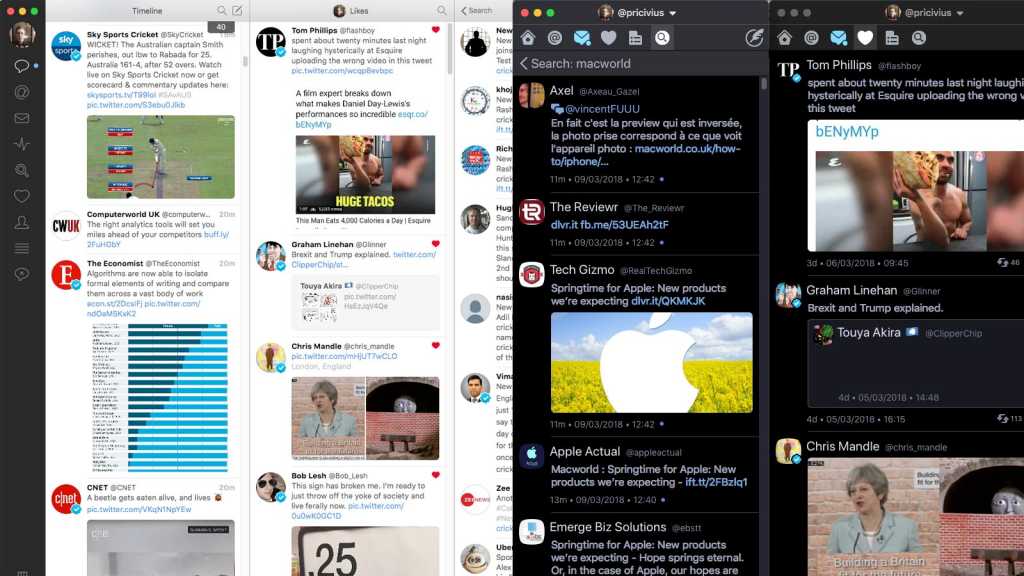 These are both strong, premium Twitter apps, and neither will let you down. The fundamental difference is that Tweetbot has more features (some of them very useful), but is slightly harder to use and £2/$2 more expensive. Twitterrific has fewer features but it’s easier to see at a glance how to do what you want. Tweetbot remains our pick of the Twitter apps (although it’s a shame you don’t get the full power of Activity’s stats and graphs on the Mac), but Twitterrific gets an honourable second place, being cheaper, easier to use and the undisputed king of muting. Think carefully about how many of the advanced features you need before making your choice.

Mastered the basics of Twitter and want to take things to the next level? The obvious next step is to start using a dedicated Twitter app, which will unlock a wide range of additional features and let you switch easily between multiple accounts.

Twitter no longer makes an app for the Mac; instead, it’s widely acknowledged that the two best Twitter apps for Mac are Tweetbot and Twitterrific. But which is the right choice for you? In this comparison review we compare the two apps for ease of use, features and price.

The most famous ‘third-party’ Twitter app is probably Tweetdeck (which is actually owned by Twitter). Its default layout is essentially horizontal, with a series of columns (for your timeline, mentions, recurrent searches etc) spread out across the screen – although tweets still scroll through each column vertically.

Tweetbot and Twitterrific have more of a vertical design: you view only one column at a time (a dropdown menu at the top of Twitterrific, and a sidebar on Tweetbot, make it easy to switch between them). This small tweak gives the apps a very different feel: rather than a big app showing everything, which you view occasionally, they’re discreet apps that sit at the side of your screen all the time.

(Note that these are just the apps’ default configurations. If you prefer Tweetbot to show more, you can right-click mentions, DMs or whatever and choose to open it in a new column or window – or use the icon that does the same thing. Twitterrific doesn’t have an icon, and only supports a multi-window view, not multi-column, but is otherwise similar.) 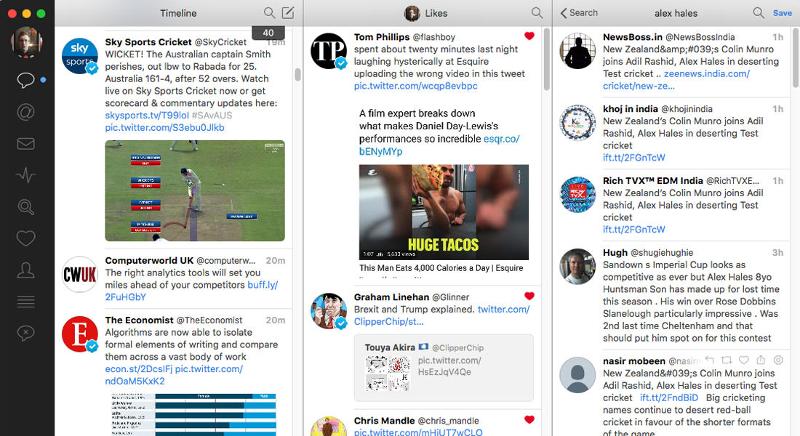 If you’re halfway down a column, both Tweetbot and Twitterrific display a little number indicating how many tweets there are above – a nice little feature you don’t get from Tweetdeck. But most of us will choose to engage ‘tweet streaming’, a preferences toggle that continuously refreshes to look for new tweets, and a further pinning option to automatically scroll up and display new tweets as they come in. Both apps offer tweet streaming and pinning as an option, but then again Tweetdeck performs the same function by default. 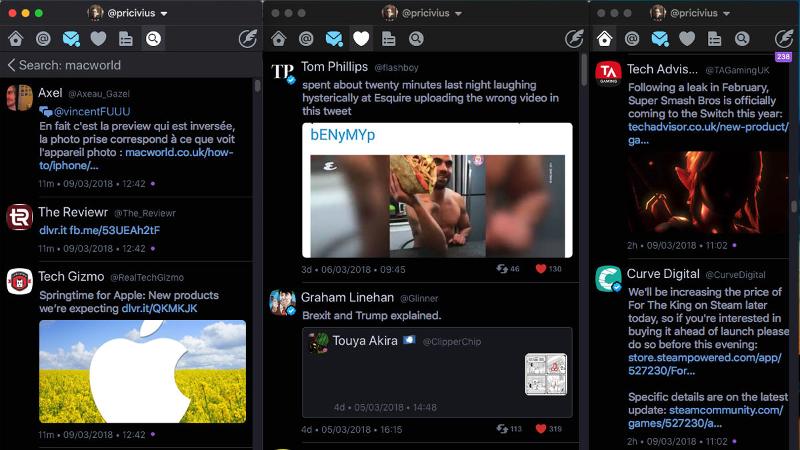 (Note that in all three cases, if you scroll down a bit the app will temporarily disable the auto-scrolling feature, because it will assume you’re reading. Once you manually scroll back up to the top, auto-scrolling will turn back on.)

Both apps offer extensive options for customising the interface and appearance, from text size to avatar shape. But Twitterrific actually offers slightly more here, including changing the font and two (!) dark modes. And unusually – given how fiercely most software companies guard their brand identity – it makes it very easy to choose between three different dock icons. (If you want to customise it more than that, here’s how to change Mac app icons.) 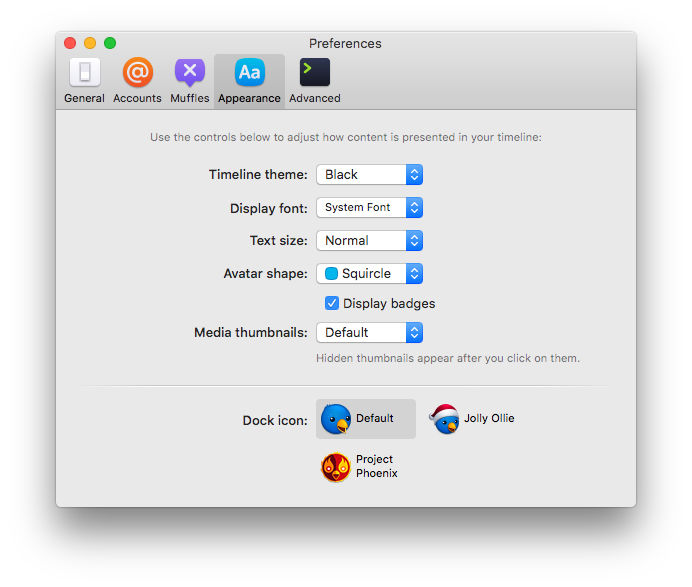 These are both extremely user-friendly apps. The function icons are familiar and it’s clear to a new user how to view the various timelines, switch accounts and send a tweet. But here are a few notes:

We find Tweetbot’s ‘add column’ icon more intuitive for new users than the right-click method for opening new columns or windows (which works on both apps, but Twitterrific depends on).

On the other hand, when you compose a tweet, Twitterrific makes it more obvious how to add images and emoji – there are icons in the compose box. In Tweetbot you need to click the cog icon and then choose Add Image, and for emoji you need to know to press Ctrl + Cmd + Space to bring up the emoji palette.

All of this may not bother you, of course. Someone planning to pay £7.99/$7.99 or more for a third-party app is probably a Twitter power user who is more than capable of exploring an app’s features for themselves.

One other thing: search is a bit funny on these apps. We ran a search for “Tweetbot vs Twitterrific” (without the quotes), and neither came back with any results, whereas Tweetdeck searching exactly the same term returned lots. We’re not sure if this is a limitation on how far back Twitter lets other companies search its archives (the most recent result was a little over a fortnight old), or if they are imposing quote marks themselves (Tweetbot’s interface implies that it is). Either way, it’s a peculiar result.

The first thing to be said about these apps – whether you view it as a feature or a peculiarity to third-party Twitter clients – is that they prune out quite a lot of Twitter’s timeline enhancements/junk (delete according to personal preferences). You don’t get ‘In case you missed it’, you don’t get sponsored posts, you just get tweets from people you follow in chronological order. Personally we view this as a bonus.

They are also united – and this is a biggie, in our view – in not offering a tweet-scheduling service: Tweetdeck is your go-to if you need to set tweets to go out at a later time.

But what sets the two apps apart from each other?

Tweetbot has a feature we love called Activity, but in the company’s Mac app it doesn’t demonstrate its full powers.

Activity is a column that shows all the activity that relates to you: people mentioning you, retweeting you, following you, liking your tweets and so on. This is immediately better and more useful than the mentions-only column you get in Twitterrific; and far better than the annoying Notifications column you get in the Twitter app for iOS and on the Twitter website, which drags in a load of extraneous stuff about people you know liking other people you know, and sometimes just famous people tweeting.

On the iOS version of Tweetbot, the Activity column is accompanied by stats and a graph showing how much engagement your tweets have been getting over time, which is useful (for those who use Twitter professionally) and fascinating (for everyone). Sadly these features do not currently appear in the Mac app.

Another feature you get in Tweetbot but not Twitterrific is called Topics. When you compose a tweet, you can also create a topic (or choose to use one you created before) indicating what it’s about: tweets with the same topic will automatically be threaded together, and you can choose to automatically append a hashtag. This is handy if you’re live-tweeting an event or otherwise returning to a single subject across multiple tweets. 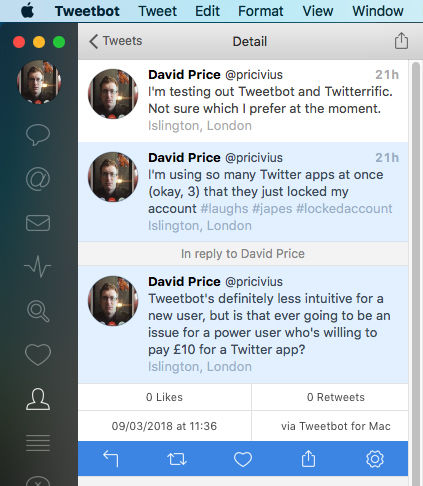 Three tweets sent with the same Topic, and automatically threaded

Finally, Tweetbot makes it very easy to add or alter location data on a tweet. Your current location appears by default, but it’s simple to change this to something else, or remove the information entirely (click the ‘pin’ icon).

Tweetbot has an impressive roster of features, then. But Twitterrific strikes back when it comes to the all-important issue of muting. Twitterrific calls its advanced muting function ‘Muffles’, which works slightly differently and allows for more sophisticated filters.

For one thing, a tweet that has been muffled still appears in your timeline, but as a single unobtrusive line showing the offending characteristic – you can still choose to click it and see the tweet in full.

Furthermore, as well as the usual muting options (muting a keyword, keyphrase or hashtag), you can also muffle users, tweets that are sent via a particular Twitter client, or even tweets that are longer – or shorter – than a specified number of characters.

In fact, Tweetdeck does allow you to mute specified Twitter apps, but you enter this manually, which can be a pain. In this case as in all others, Twitterrific makes it very easy to apply a muffle: right-click the user name at the top of a tweet and you’ll see the option to muffle that user, another user mentioned, a hashtag in the tweet, or the client used. 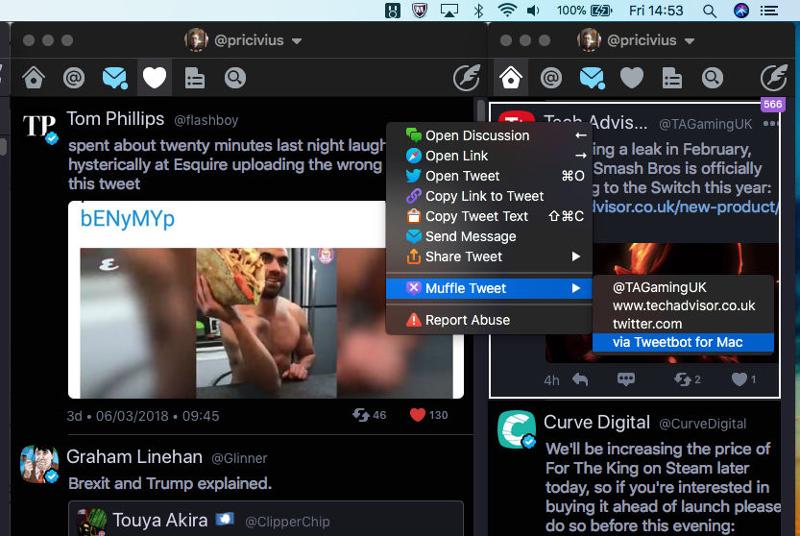 Tweetbot offers decent muting options – you can mute a user or Twitter app (and this time you choose from a popup menu, which is a little easier than in Tweetdeck), but that right-click menu makes Twitterrific’s muffles far easier to apply.