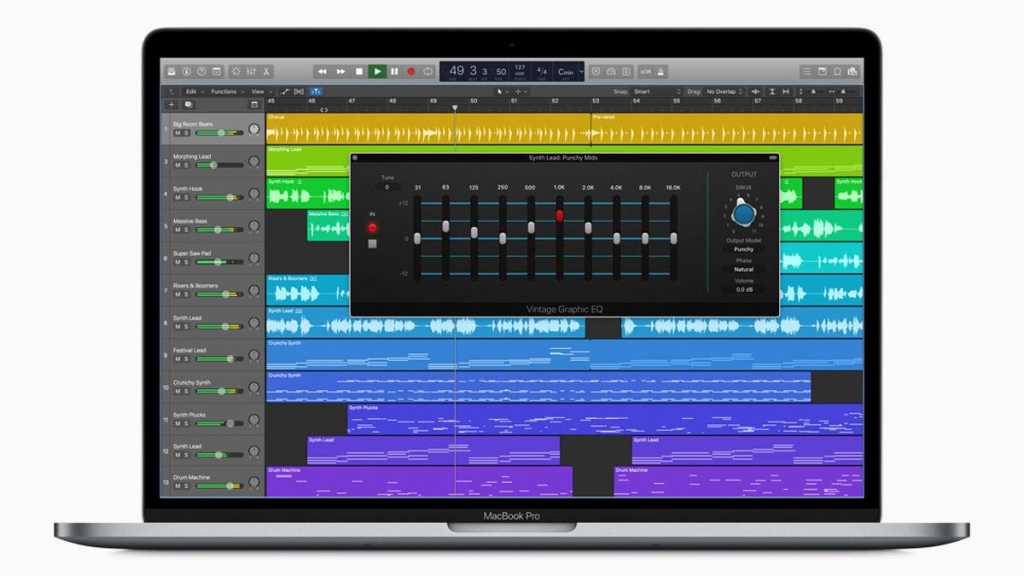 Thanks to its excellent performance and tool set, Logic Pro X already justified the £199.99 price tag. With the 10.4 upgrade existing users will see that it was money well spent, and frankly be amazed at the wealth of new features that Apple continues to bestow upon them. Smart Tempo has the potential to be a game changer for live recordings, and Phat FX, Step FX and ChromaVerb not only offer high-quality aural enhancement to projects, but also bring a much-needed sense of fun and exploration. Anyone considering making the step up to Logic should rest in the knowledge that right now it’s one of the best bargains you can buy from Apple, or anyone else for that matter.

For a number of years now Apple’s  Logic Pro X music production software has been one of the quiet jewels in the company’s crown. Yes, the iPhone, iPad and Mac will be used by more people, but when it comes to quality, value for money and the continual addition of new features, Logic takes some beating.

At the start of 2018 the team at Cupertino announced another update to the software, and with it comes some serious new tools and features. In this article we take a look at what’s on offer in Logic Pro X 10.4.

You can compare this update to the previous one by checking out our Logic Pro X 10.3 review; note also that Logic Pro X 10.5 was announced in May 2020. And to see how the pro-level software compares to the free music production app that comes with every Mac, read our Logic Pro X vs GarageBand feature.

Apple has stated that Logic Pro X has more than 2,000 bug fixes and new features nestling in its code. While these figures can often seem like hyperbole – is it 1,999 bug fixes plus a new reverb? – in the case of Logic Pro X 10.4 nothing could be further from the truth.

New capabilities and plugins such as Smart Tempo, ChromaVerb, Step FX and Phat FX all make this an update that any other company would (not unreasonably) claim as a full version upgrade rather than a point release. The fact that Logic owners get these new innovations for free is, frankly, ridiculous, and Apple should be applauded for its continued support of the platform.

There’s plenty to get your teeth into, starting with undoubtedly the star of the show – Smart Tempo.

Logic Pro X users will already be very familiar with Flex Time, the feature that can sort out the wandering tempos of live performances by subtly pulling them back on to the beat.

While this is a blessing for producers wanting to keep everything sounding tight, it can mean tracks feel too precise at times, sacrificing the looser feel that harks back to the days of Led Zeppelin when the only click track used was a pounding drummer in the next room.

With Smart Tempo, Logic essentially turns Flex Time on its head, adjusting the tempo to fit around the audio instead. With the feature engaged you can record a live instrument, not concerning yourself overly with setting the right tempo.

As you play, Logic monitors and analyses your timing, placing various tempo change markers into the track information. When the riff or chord sequence is down, it then uses the markers to adjust other tracks so that they fit with the feel and timing of your recording.

This means that the drummer will sit in with you, making small corrections to match your playing, as will any other loop or audio that you add to the project. Now, it must be said that if your playing is all over the place then the results won’t be great, but for reasonably tight performances it can return that live feel that most of us crave. 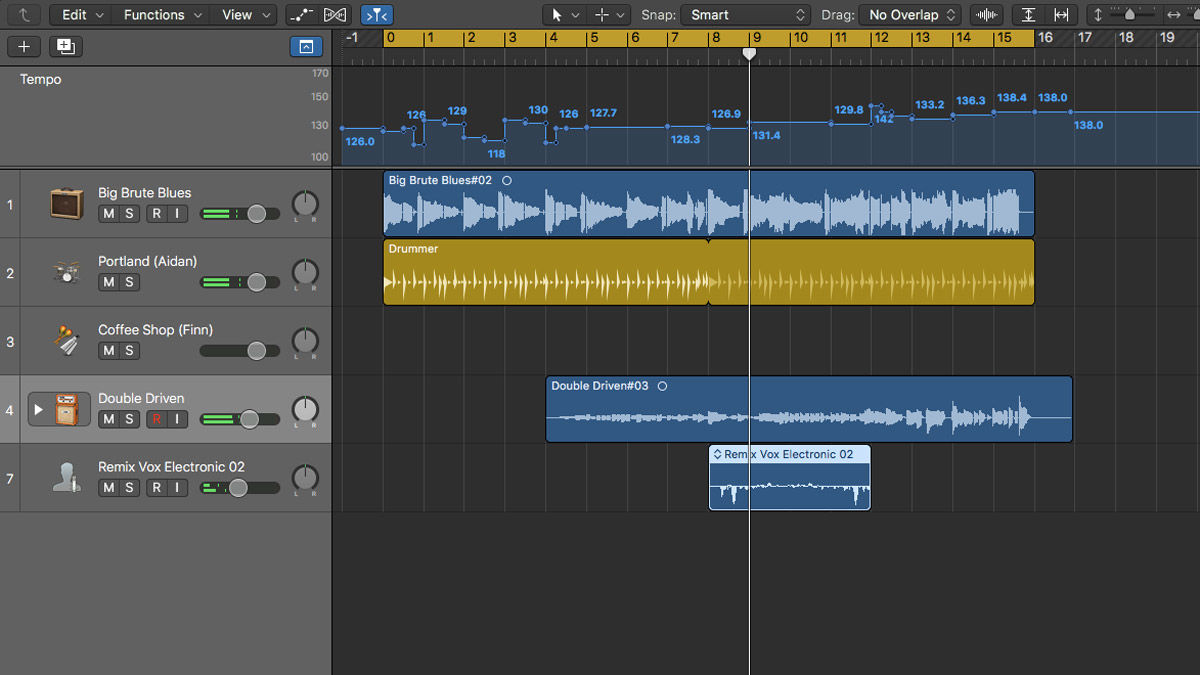 The tempo markers are attached to the recording, so if you move it to another part of the project the changes will move too. They are also replaced when you copy and paste the region.

Double-tracking an instrument is simple with Smart Tempo, as the variance in timing is minimised, and it also means that any time-based loop will now work with your project, as the tempo is adjusted to fit.

Another option is to apply the project tempo to the audio instead. This means that you can record a complicated riff at 120bpm, then speed it up to 180bpm just by changing the tempo. Naturally this tempo would also apply to all other recordings, drummers and loops.

In our testing the tempo analysis would work, but we couldn’t always get the drummer or loops to sync, even though the settings and methods we used were identical. Complicated rhythms proved the most unreliable, although we did get them in time with some fiddling.

For the latter there is the Tempo File editor, which quickly enables you to adjust the markers, and correct any confusion that may have occurred in the analysis.

Teething problems aside, Smart Tempo is an excellent addition to Logic, which will simplify the lives of songwriters or those remixing live bands and wanting to add post production loops. It’s not a catchall, though. At the moment the feature only works with single audio tracks, and not recording takes or with track alternatives, but it’s a great start.

Undoubtedly the most aesthetically pleasing new feature is ChromaVerb. This is an algorithmic room reverb, offering 14 different environments that range anywhere from a standard Concert Hall to the enigmatically named Strange Room which has a hint of ring modulation about it.

The main draw is the graphical representation of the sound and decay. These look like particles that are thrown up and then fade away into the ambient dust clouds behind them. Apple says this emulates “the principle of a circular structure in which the sound is gradually absorbed, much like in a real room”. 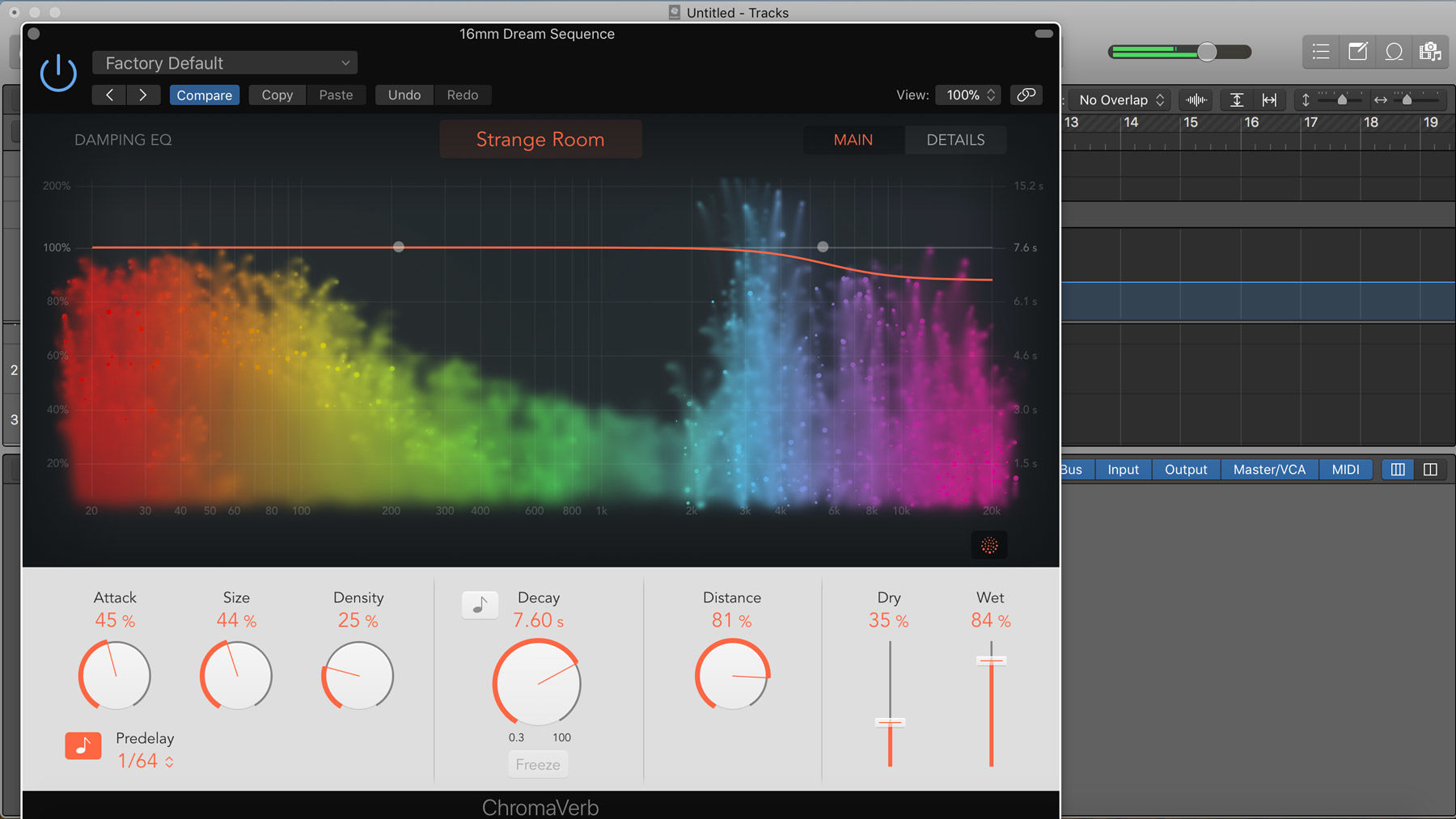 There’s also a cool ‘Freeze’ setting that suspends the current effect in a slow fade, perfect for accentuating certain moments in a composition.

Whether you buy into the language or not, ChromaVerb is a powerful reverb tool that looks beautiful, and the visual cues of dissipating sonic nebulas add an interesting and surprisingly useful dynamic.

Three new EQ consoles, all based on classic models from the 50s, 60s and 70s, also make their debuts in Logic Pro X 10.4. These are emulations of Neve and Pultec EQs, and see the welcome addition of vintage models into the palette. 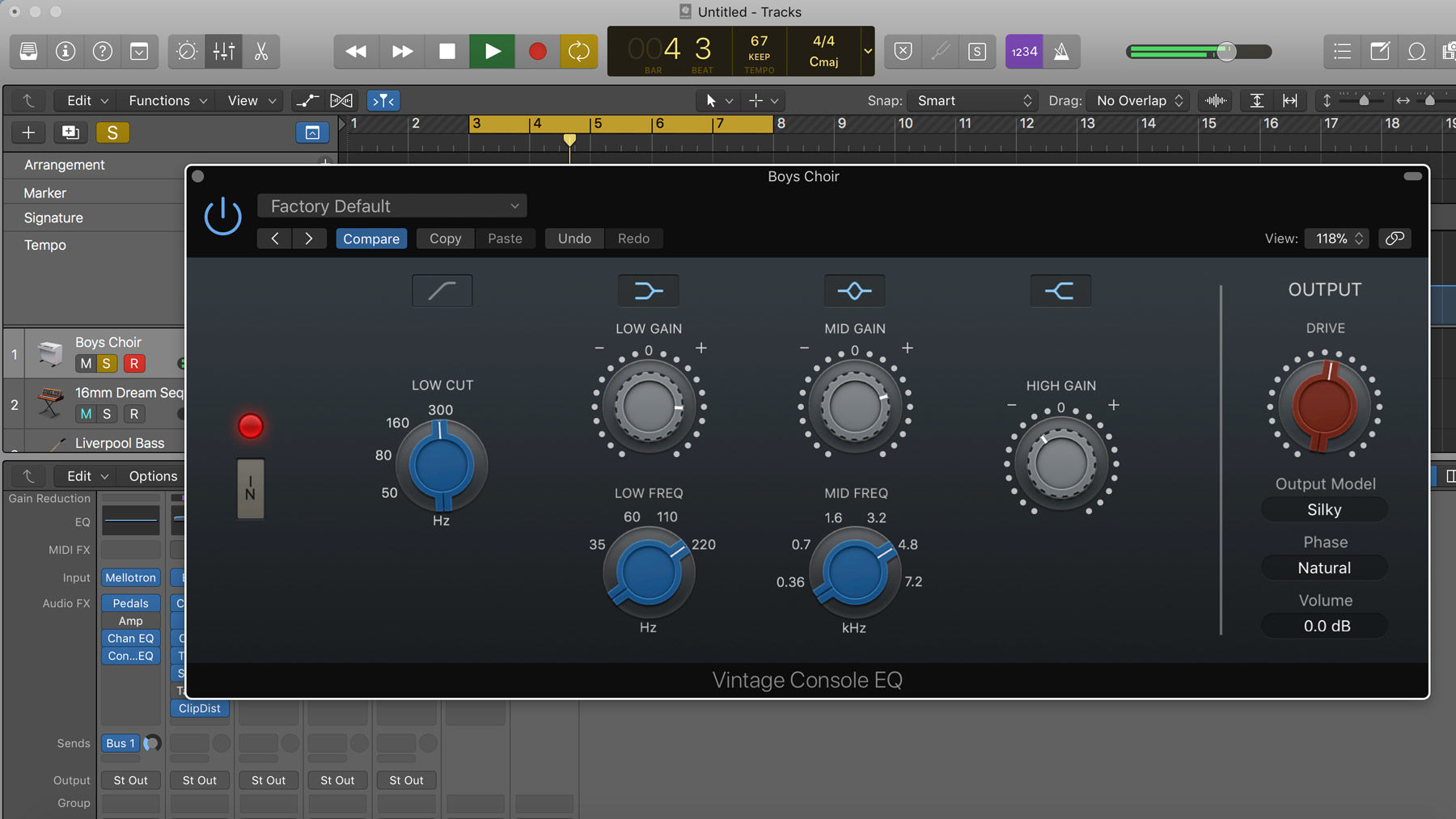 One of the advantages offered by these models is that whereas the original hardware had various stepped settings, the digital versions allow you the option to also sweep through the intervening frequencies, creating new sonic possibilities.

Each also features a drive control in the Output section and the ability to turn off the EQ stages. This means you can use the natural characteristics of each unit to colour the sound without needing to engage the EQ itself.

Step FX combines distortion, modulation, reverb and delay effects with three step modulators, all of which can result in some serious sonic mangling. By selectively engaging each step modulator you can alter the pan, gate and filter frequency, or engage all of the units for some fascinating polyrhythmic anarchy. 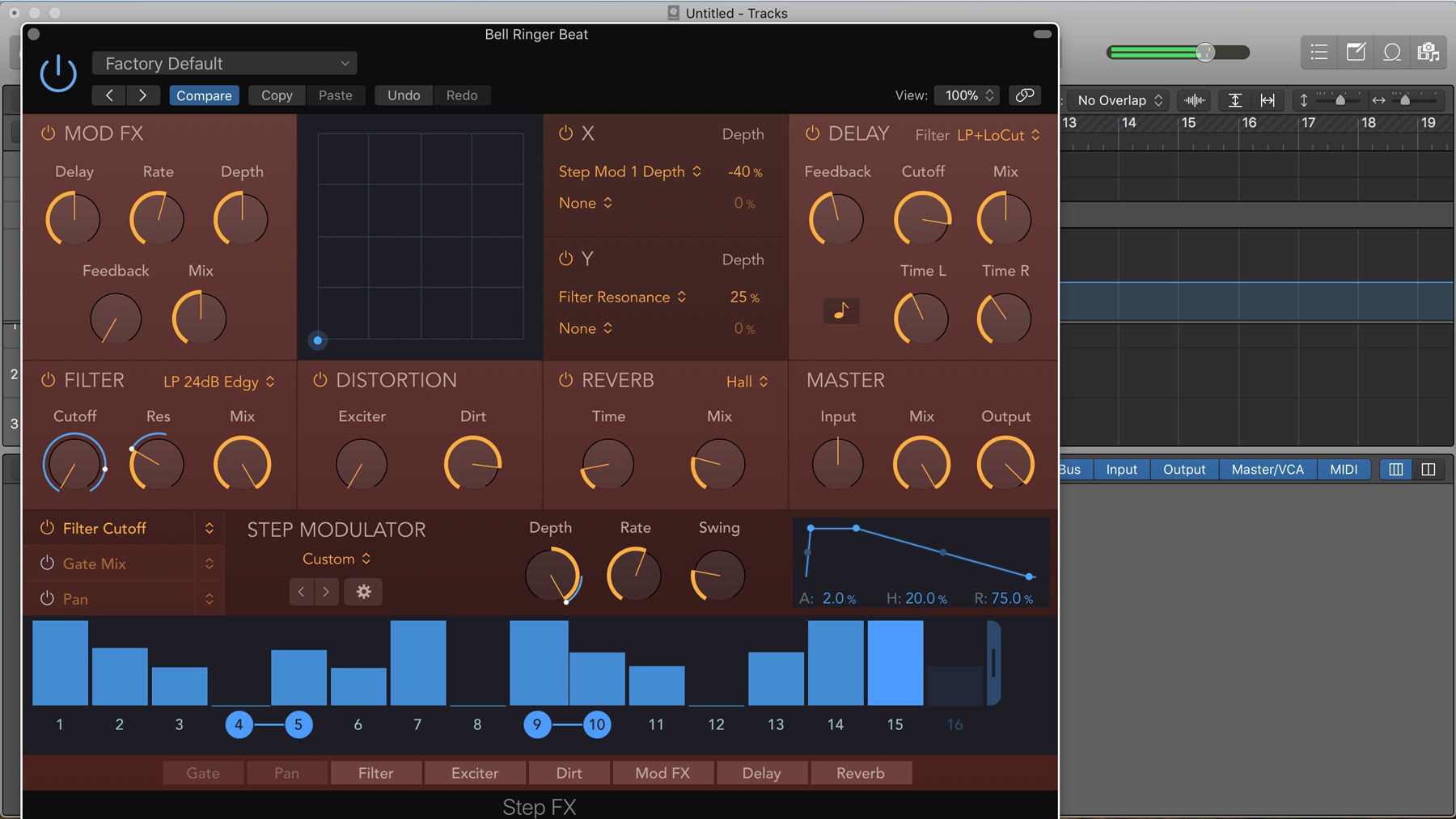 It’s easily our favourite new feature, and something that rewards continued experimentation with unpredictable and mesmerising results.

The clue is definitely in the name with this effect, as the results you can get from it when applied to guitars, bass or drums are indeed phat! This multi-effects module allows you to chain distortion, modulation, compressors, envelope filters, LFOs and enhancers on to tracks, all controllable in real time via a virtual X/Y pad controller. 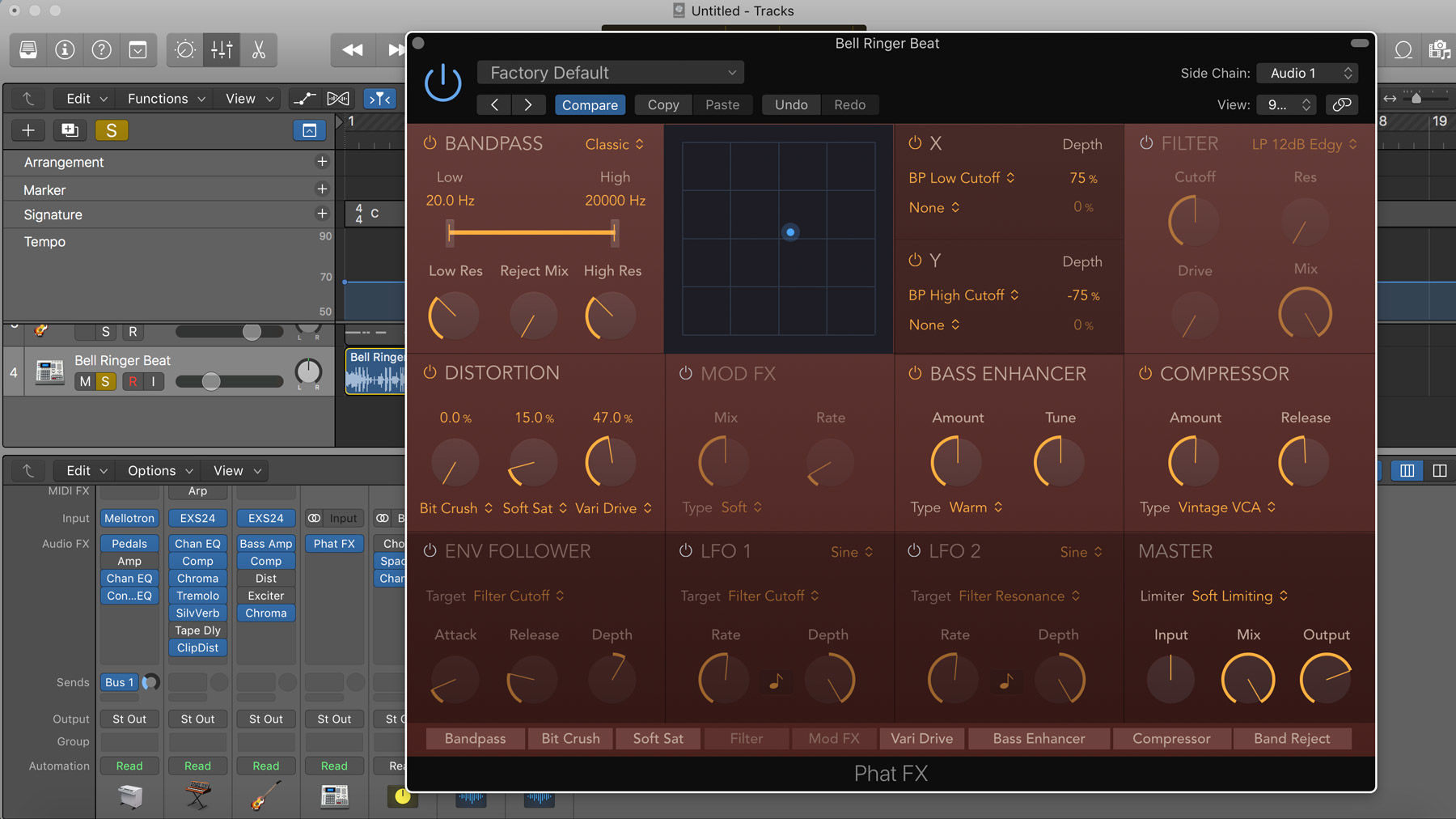 You can move the positioning of each effect in the chain by simply rearranging the order of the names at the bottom of the window, or opt for one of the many preset sounds included in the menu.

Within minutes of turning on Phat FX we found ourselves smiling broadly and enjoying the creative playground that will be a regular feature in all our mixes from now on.

Alongside the considerable new features listed above Logic also comes with a host of other additions. These includes a vintage mellotron module, upgrades to Space Designer, Alchemy and Direction Mixer, new drummers, studio quality brass and string samples, plus new controls for articulation handling.

Not bad at all for a free upgrade.

Of course, new features mean new challenges for hardware, and as such you’ll need to be using a Mac that can at the very least run Sierra if you want to take advantage of the additions. ChromaVerb also uses Metal, so it requires a decent GPU to show off its elegant charms.

For more general advice about suitable hardware, see our guide to the Best Mac for musicians.