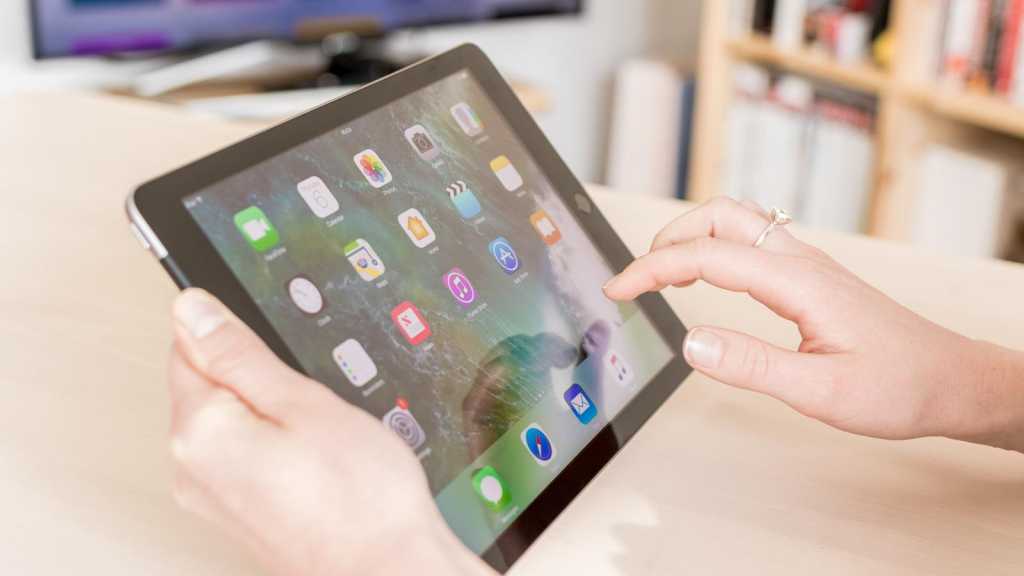 Which of these ‘budget’ iPad options is best for you? If budget really is the be-all and end-all, the iPad 2017 is your best bet, because it starts at £319 instead of £399. However, as we said above – that £80 saving can partly be attributed to the fact that you are getting less less storage. But, when you consider that an 128GB iPad costs just £10 more than a 128GB iPad mini, and has a better processor, a potentially better battery, a bigger screen, Live Photo, body and face detection, Retina Flash, compatibility with the Apple Pencil, and the new shade of gold, it’s pretty easy to see which iPad is the best deal. All the iPad mini has going for it is the fact that it’s more portable and the screen has a higher pixel density, we also prefer the iPad mini screen because it’s laminated. Despite these factors we certainly can’t recommend the iPad mini. First, the fact is that this model dates back to September 2015 – this may limit the number of years use you will get out of it before it becomes obsolete (it may be some years before it becomes obsolete, but it will certainly become obsolete before the 2018 iPad). Second, we are suspicious that Apple’s neglect for the iPad mini indicates that it will be discontinuing the iPad mini at some point this year. You might be a fan of the iPad mini, but if Apple’s neglect of the smallest iPad is anything to go by, not many people are.

There are some significant improvements and changes to the 2018 iPad compared to the one that came before it. The new feature that Apple is bragging about the most in terms of the 2018 iPad is its support for the Apple Pencil. The other new feature that will set this iPad apart from other iPads is the fact that it is the first iPad to come in the new shade of gold, that combines the best of the Gold and Rose Gold shades from the older models. There are a lot of other new features that we will look at in more detail below and in our review of the 2018 iPad.

So, that’s the 2018 iPad, but what we are interested in here is how it compares to the iPad mini, Apple’s other diminutive and budget-friendly iPad option. The iPad mini (which we review here) hasn’t had a lot of attention from Apple over the past few years. It was last updated in September 2015 so it’s specs look a little dated now. Probably the only thing the iPad mini has going for it is the fact that it is smaller and lighter than the other iPads. If that’s what is most important to you then it’s still worthy of your consideration.

In this article we will compare the specs, features and design of Apple’s two smaller, and more budget-friendly tablets, and help you decide which is the one for you. You may also be interested in our iPad buying guide 2018.

If you reach a decision after reading our article, you can buy the iPad 2018 or the  iPad mini 4 from Apple. The iPad 2018 is also available from a number of other retailers, including John Lewis, Argos, Currys PC World and Very.co.uk. US visitors can find the iPad 2018 at BestBuy and some models from Walmart. 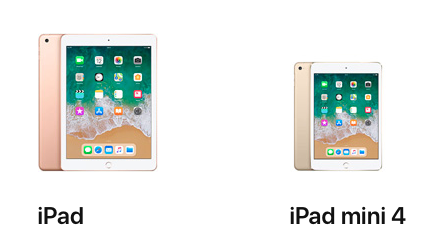 You might be thinking that it would be a bargain to buy an iPad mini, assuming that since they are now so old, Apple would have cut the price, but you’d be wrong. The iPad mini costs £80 more than the 2018 iPad does at £399/$399 – although as we will discuss below, you do get more storage for that price.

The only way you can get lower prices is by looking for an older iPad second-hand.

Here’s a breakdown of prices:

The iPad mini 4 and the 2018 iPad have very similar looks. Both iPads offer lightning docks at the bottom for charging and plugging into peripherals. Both iPads have headphone jacks (unlike the iPhones). Both feature the Home buttons with Touch ID that scans your finger print before unlocking the device. This latter point is It’s likely that the iPad Pro will lose the Home Button in the next generation so this may well be the last new iPad to feature the Home Button.

The big exception is that the iPad mini is smaller and lighter. We’ll discuss dimensions below, but first there is a significant change to the colour options that we will address first.

The 2018 iPad is identical in shape and structure to the 2017 iPad with one major difference – there is a new shade of gold. Where the iPad mini and iPad used to share the same colour options: silver, gold and Space Grey, now there is a significant difference between the shade of gold. 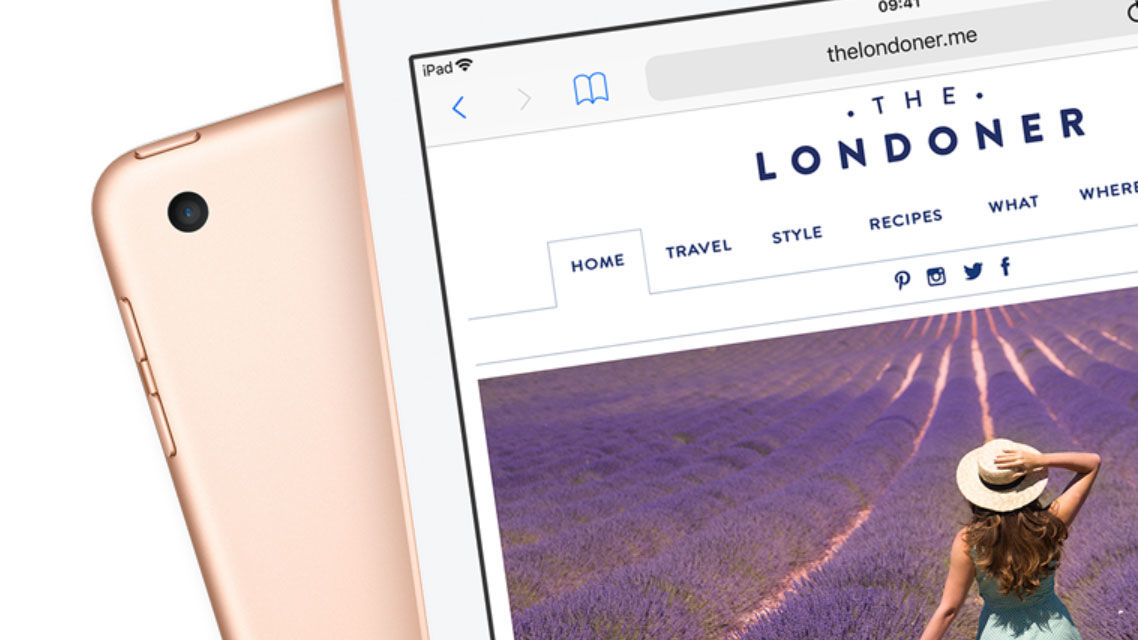 If you choose the gold finish for your 2018 iPad you will find that it has more pink tones to it. We’d say it is a slightly muted version of the Rose Gold shade that’s available for the 10.5in iPad Pro. Compared to the gold finish on the iPad mini, we’d say that this newer gold-finish is the more attractive option. We think it’s nice, but it might be too pink for some. (Incidentally, it’s the same gold finish that’s available for the iPhone 8, so it’s only a matter of time before the new shade makes its way to other iPads).

Back to the dimensions. There is no disputing the fact that the iPad mini, with its 7.9in display, is smaller than the iPad, with its 9.7in display, and if that’s what’s important to you then there’s not much more to say (other than maybe you could consider at an iPhone 8 Plus with its 5.5in screen).

Here’s how the iPad and iPad mini compare in terms of weight and dimensions:

Both iPads are slim. The iPad is 1.4mm thicker than the iPad mini (we doubt that you’d notice). Although, it should be noted that this generation of iPad (as was the case with the 2017 iPad) is thicker than the old iPad Air models were.

You may notice the extra 3.5cm of length and the 3.5cm of width if you have a small bag (you won’t fit an iPad mini in your pocket). But it’s not likely to be hugely significant unless you really need to have a smaller iPad for some reason.

Don’t get us wrong though – the iPad mini (pictured below) is indisputably smaller than the iPad and we have to admit that we have always thought that the iPad mini was the perfect size. It fits comfortably in one hand for book reading, being light enough not to strain your wrist if you are reading for long periods of time. The screen is a good size for watching video on public transport without feeling that the whole train carriage can see it. 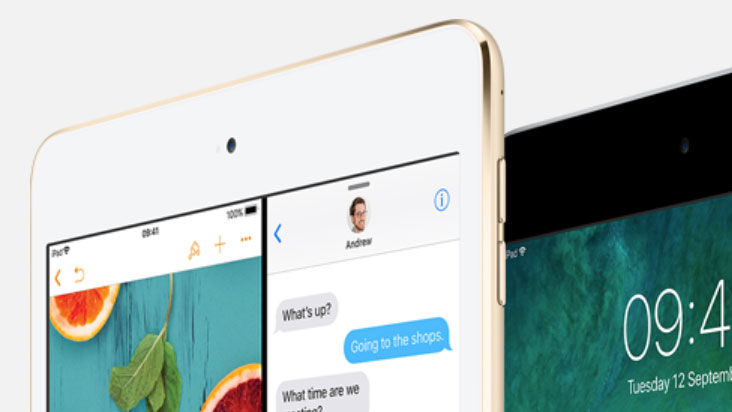 But the iPad is a lot smaller and lighter than the original iPad was. If in the past you opted for an iPad mini over the iPad because you felt that the iPad was too big, we suggest that you look again.

In comparison to the iPad mini, that extra 3.5cm of length and width on the iPad translates into 1.8in more display (or an additional 4.57cm if you are metric.) This seems like a good deal to us.

There are a couple of things to say in favour of the iPad mini display though. The iPad mini display is sharper, with a pixel density of 326 pixels per inch compared to the 2018 iPad’s 264ppi. This actually means that both devices have the same number of pixels – the mini’s have just been squeezed into a smaller space.

Another thing in favour of the mini’s screen is the fact that it is laminated, like the screens on the iPad Pro models. The iPad 2018 (like the 2017 iPad before it) has an unlamented screen, which ‘gives’ slightly when you press it. This isn’t a huge problem but we’ve always thought it makes the device feel a bit cheaper.

Here’s how the two screens compare: 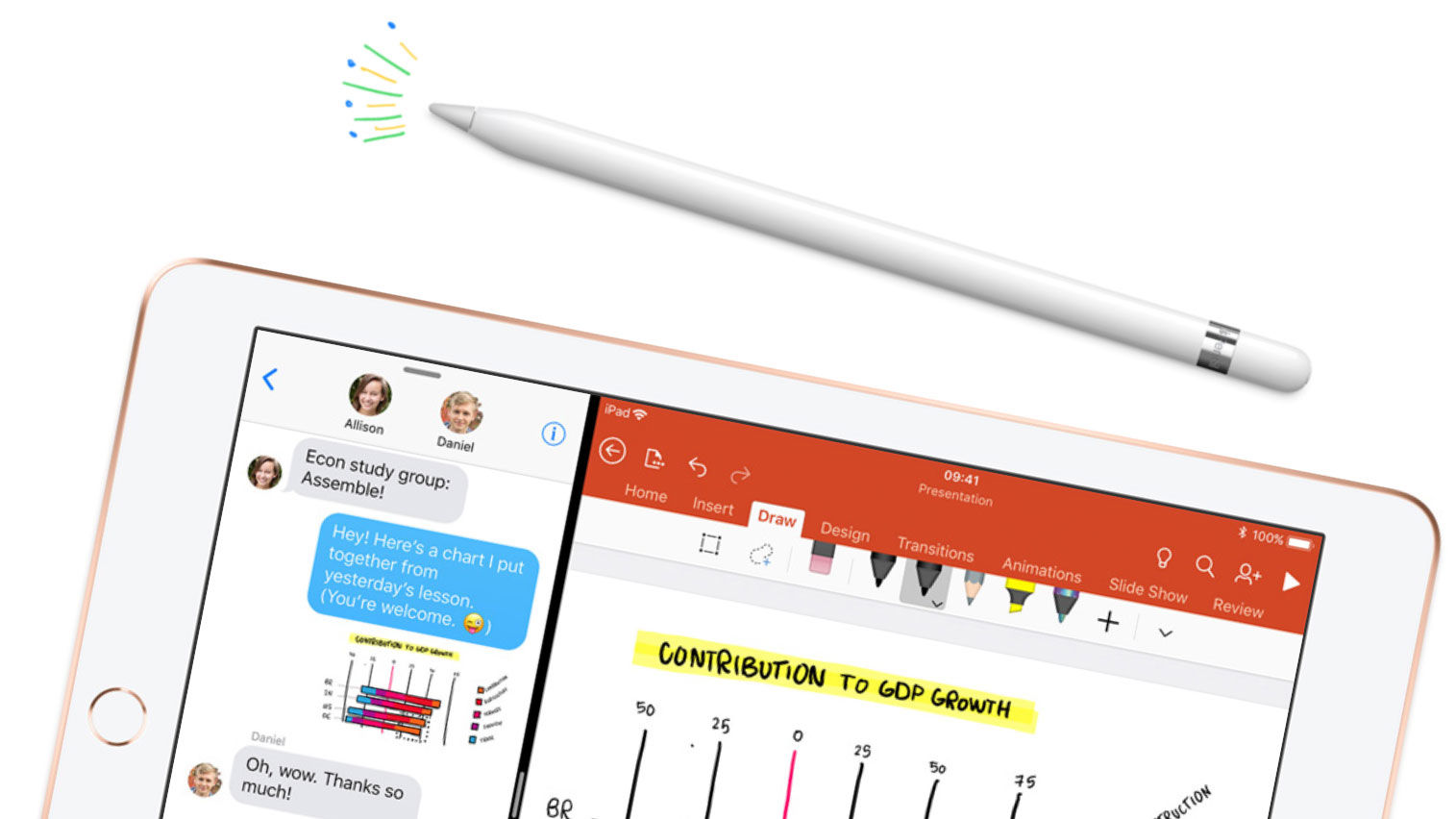 In terms of features, the iPad mini and 2018 iPad are a close match, except for one big difference: The 2018 iPad gains compatibility with the Apple Pencil (something only the iPad Pro models had previously – read our comparison of the iPad 2018 with the iPad Pro here).

Like the iPad mini the iPad doesn’t offer Smart Keyboard compatibility (although you can link it to a Bluetooth keyboard); or quad-speaker audio; or True Tone display tech.

But they do both get Touch ID and Apple Pay and the Retina display.

Only the iPad gets Live Photo – the ability to take a moving image (basically a short video clip).

The iPad also gets body and face detection, while the iPad mini only detects faces.

Features that the Pro models get that both the iPad and iPad mini lack include the rear-facing Quad-LED True Tone flash and Optical image stabilisation.

There are a few differences between the front facing ‘FaceTime’ cameras on the iPad and iPad mini. Both are 1.2Mp (while the Pro models get 7Mp). However, the iPad mini FaceTime camera can’t take Live Photos and there is no Retina Flash option – so it won’t be as good for talking selfies, if that’s what you are in to.

Moving onto the internals. The iPad 2018 has a faster processor chip and a larger battery, however, in many other respects the two devices’ specs are the same or closely matched.

The new iPad gets a processor that’s two generations more advanced than the mini 4.

But the degree to which the difference is noticeable will depend on the tasks you set your tablet. High-powered games, for instance, will showcase the A10’s capabilities; browsing the web and using email will not. 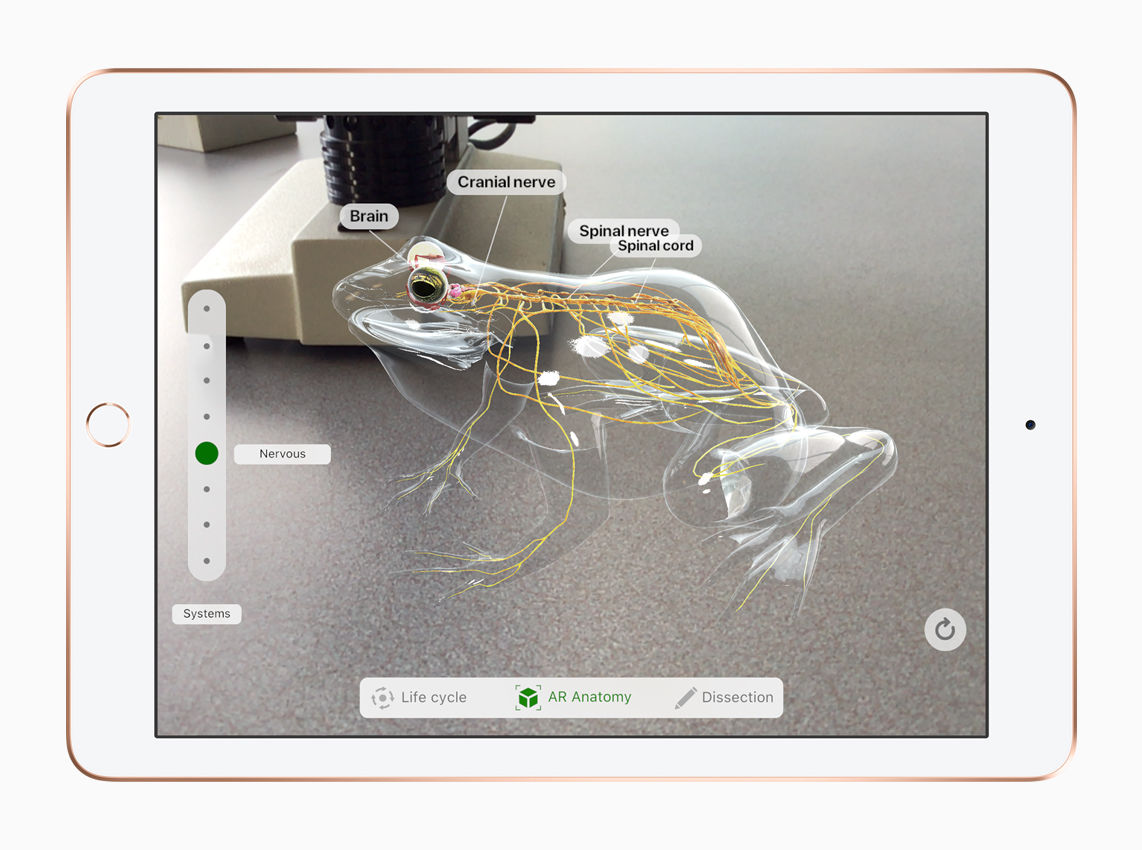 Both tablets come with a fairly standard (for Apple) 2GB allocation of RAM. Only the iPad Pro 12.9in gets more, with 4GB.

You get less choice if you choose the mini 4, which is only available with 128GB of storage. The iPad 2018 (like the iPad 2017) is also available with 32GB storage. That’s not a lot of storage, but it means that the starting price can be lower, and you may find that you don’t require as much physical storage if you choose to pay for iCloud storage instead (you can get 50GB for 79p a month, 200GB for £2.49 a month and 2TB for £6.99 a month.

Both iPads offer battery life of up to 10 hours of surfing the web on Wi-Fi, up to 9 hours using mobile data network, according to Apple. However, there are some differences in the battery specs.

While Apple gives the same estimated battery life for both devices – 10 hours using Wi-Fi, nine using 4G – our experience suggests that the iPad 2018 should last longer away from the mains. 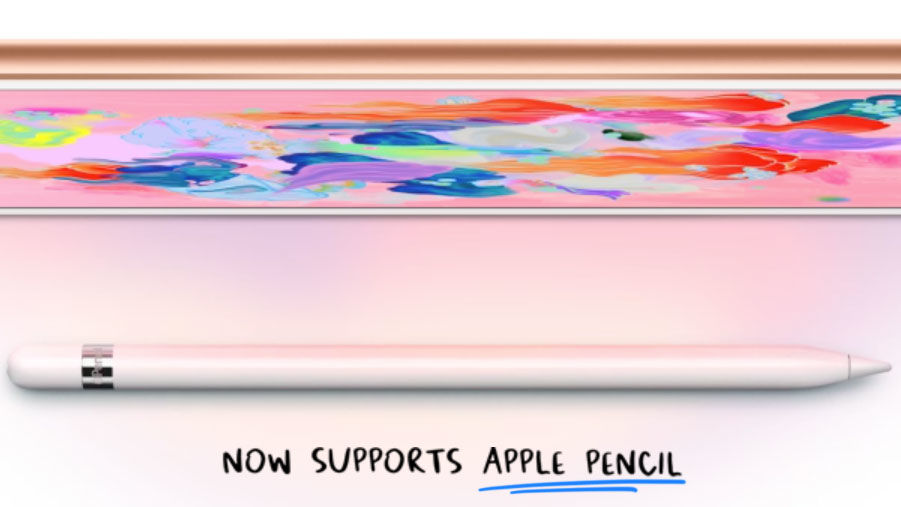