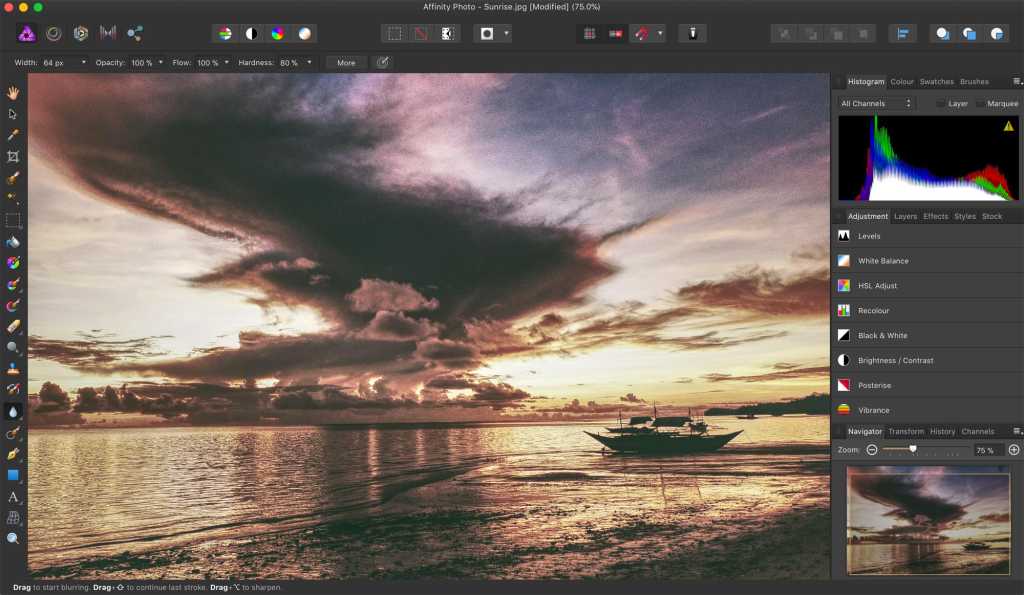 Affinity Photo is a power tool. Although it can indeed make subtle tweaks, just like any image editor, doing so feels like you’re using a Bugatti Veyron to go to Sainsbury’s. Competitor image editors like Photoshop or Pixelmator somehow manage to hide away all their power unless you specifically seek it out, which is curiously user-friendly. With an asking price of just £48.99/$49.99, Affinity Photo is a bona fide bargain. For semi-pro and even pro-level editing it really is a competitor for Adobe Photoshop.

Despite being in no way connected with Adobe, there’s a strong whiff of Photoshop about Affinity Photo. This is, of course, no bad thing – especially considering that Affinity Photo’s one-off price of just under £50/US$50 is massively cheaper than anything Adobe offers.

In fact, Affinity Photo can be forever yours for the equivalent of less than half a year’s subscription to the Adobe Creative Cloud Photography package.

Although Affinity Photo might be priced at a level where amateurs can snap it up, its makers are keen to stress a professional feature set. You get CMYK and Lab colour space support, for example, which is a necessity when working accurately in the print design industry.

RAW image support is built in, with support for all modern cameras, and the app claims the best support for Photoshop’s ubiquitous .psd file format outside of Photoshop itself.

If anything it feels as if Affinity Photo is a cousin of Adobe Photoshop, in that it looks kinda similar, and you’ll find the everyday useful functions found in Photoshop.

However, Affinity Photo occupies its own branch of the family tree, with its own idiosyncrasies and useful features that might cause its Adobe relative to look on enviously.

First among these, and vital for any Photoshop switcher to learn, is the concept of Personas. Essentially, these switch Affinity Photo between various operating modes, which means a different toolbar, menu options and side panels.

Arguably the two you’ll spend most time using are the Photo persona, which offers access to the main toolkit, and the Develop persona, which is designed for the pre-processing and trivial adjustment of RAW images (although it can also be used for any image file format).

The other personas of Liquify and Export are self-explanatory, although Tone Mapping requires some explanation and lets you play around with the image tone, brightness, exposure, shadows, highlights, curves and more to produce some interesting one-click filters.

Essentially, the Tone Map component is like a DIY Instagram filter tool and if you’re the kind of person who likes to make their snaps look like washed-out 1970s film then you’ll be in seventh heaven.

Affinity Photo’s layers feature is also different to Photoshop because just about any adjustment or filter can exist as its own layer. You might add a curves adjustment on its own layer, for example, and a denoise filter as another. The benefit is that you can then edit any of what Affinity Photo calls “pixel” layers containing the actual image data without having to abandon these edits.

When browsing through Affinity Photo’s toolbar and menu options it’s easy to feel like a child in a sweet shop.

Particularly impressive is the Inpainting brush tool. Just draw over an object you want to remove from a picture – an irritating tourist, for example, or a telegraph line – and Affinity Photo will magically remove it.

This can also be used to restore parts of an image that are missing – for example, removing a tear within a scanned-in photograph. Inpainting works extremely well, to the extent that it might actually be some kind of voodoo.

Then there’s the stacks tool that lets you combine several shots of the same subject or scene, automatically aligning them and letting you merge them into one composite photo in interesting ways.

To get an idea of what you’ll find in Affinity Photo, we recommend you take a look at the video tutorials, all of which last just a few minutes. Some hugely impressive stuff is possible.

Indeed, it’s almost impossible to criticise Affinity Photo but, if forced, we’d suggest that it’s a little too biased towards creating new images, or making significant adjustments to existing ones.

Affinity Photo is available now on the Mac App Store. For related advice, see our roundup of the best pro photo editors for Mac.