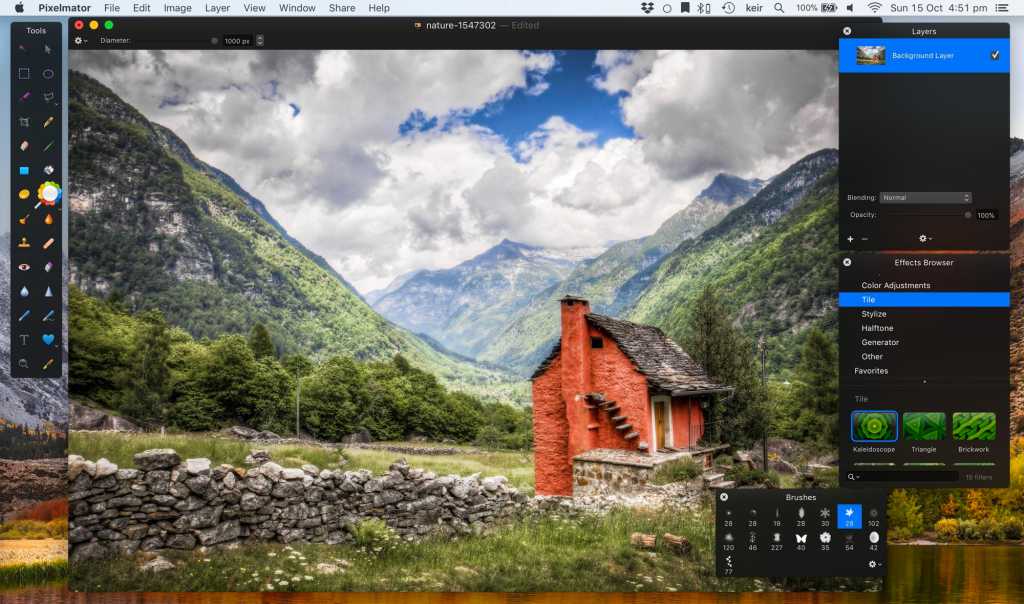 Sadly, the omissions listed above definitely nudge Pixelmator into the enthusiast rather than pro category. To use it daily for pro-level image manipulation will lead to regularly pushing against its limitations. Nonetheless the folks behind Pixelmator remain committed to the product and very responsive to the needs of users. Version 3.7 as reviewed here is perhaps the first third-party image editor to support the HEIF image format, as introduced with iOS 11 and macOS High Sierra.

Pixelmator has a lot of fans in the Mac world, where its combination of amazing value for money plus extensive feature list makes it the most likely candidate for a swap-in Photoshop replacement.

In fact, it’s hard not to notice the influence of Adobe’s product when working within Pixelmator. You’ll certainly find most of the key tools that have proven useful across the decades, and all within an interface that looks beautiful and fits in entirely with the macOS aesthetic. The integration with macOS is more than skin-deep – Pixelmator also uses macOS’s underlying CoreImage and OpenGL technologies, meaning the results appear virtually instantaneously when you’re applying effects or even making heavy edits.

This is not to say that every tool you might be used to is present in Pixelmator. For example, while Clone and Heal tools are present, there’s no Patch tool, or Context-Aware Move tool, or History Brush. There are actually quite a few other omissions that become apparent the more you use Pixelmator. Depending on your level of image-editing sophistication, these absences might be annoying.

Similarly, when it comes to filter tools you typically don’t get a huge number of options for each beyond a slider to control the strength of the effect. This is nearly often all you need, though – aside from those moments when you’re looking for that little extra creative freedom.

However, none of this is an accident. Pixelmator keeps things simpler than Adobe’s effort, and it also lacks the legacy requirement to make older users feel at home by keeping obscure sliders and switches in place. This means that Pixelmator has found a home with amateur and semi-pro image editors who use it occasionally, rather than daily. It’s also popular amongst people who create original art, with an extendable and easy-to-use brush tool.

It’s hard to overemphasise the simplicity of the interface. Want to adjust the levels of the current layer? Just find the Levels thumbnail within the Effects Browser window, and drag it on top of the image window (or double-click it). Then adjust the sliders in the dialog box that appears. Want to remove a zit from your model’s face? Just click the Heal tool on the toolbar, and then draw over the blemish.

Although there might be the most marginal of learning curves, if you’ve used any other image editor over the last 20 years then there’s nothing disruptive in Pixelmator.

Alas, there are some notable weaknesses. Although it’s compatible with the same extensive list of RAW image files as macOS, it can only open them for editing just like it would a JPEG or TIFF. In other words, Pixelmator is not a RAW image processor. You can’t easily correct for notable camera defects, for example, because the image has already been processed in order to render it within Pixelmator and some data lost during the process.

Amongst some of its most notable omissions compared to Photoshop, Pixelmator also lacks a history browser, so you can’t see what edits you’ve already made and switch back to an earlier one – although you can, of course, simply keep hitting Cmd+Z to undo your recent changes.

You can get Pixelmator from the Mac App Store. For related advice, see our roundup of the best pro photo editors for Mac.