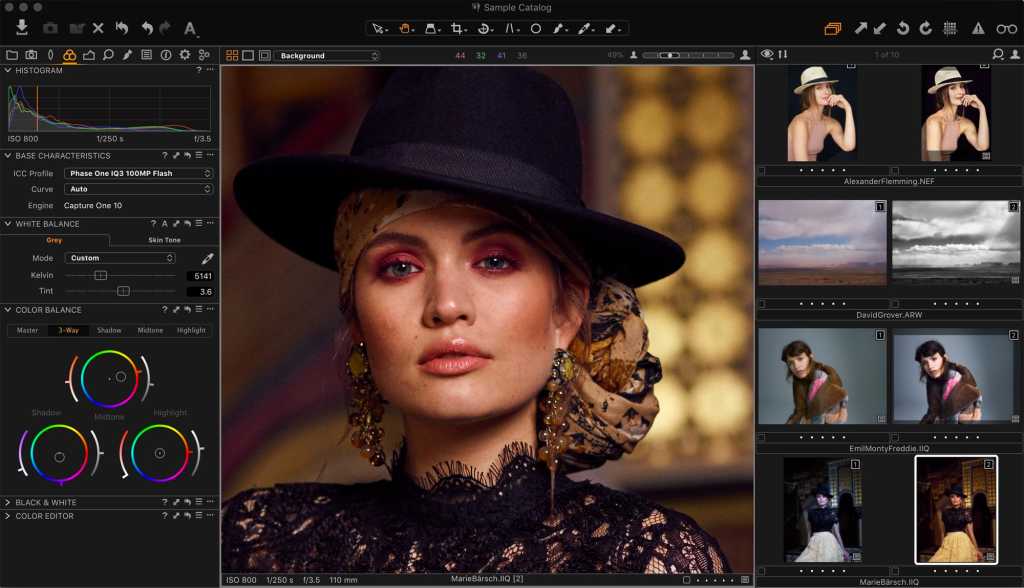 Capture One Pro exists to help those serious about photography create workflows that let them quickly eke the most from professional-grade images, as well as provide a permanent home for them. It has the feel of a reliable and sturdy tool – a kind of De Walt of the image editing world – and we doubt you’ll find anything more powerful. However, the sheer number of controls and the subtle degrees of adjustments can feel like a labyrinth. For the more casual day-to-day image editor – and for pretty much anybody beneath scrupulous professionals who need to ensure perfect images – it’s actually quite hard to recommend Capture One Pro. If nothing else, the price is high and you’ll need top-end colour-matched equipment to even begin to get the best out of it.

The price of Capture One Pro 10 – €279 for up to three computers – indicates we’re in professional photo-editing territory, an assumption backed up by the all-black user interface (somebody somewhere clearly decided that grey or white just weren’t serious enough for pro-level Mac apps). Capture One Pro’s professional chops are also emphasised by the fact it’s made by Phase One, a company that manufactures seriously high-end camera systems – although it’s important to note that Capture One Pro is designed to work with images produced by the majority of DSLRs regardless of manufacturer.

The app describes itself as an asset manager and RAW converter and, in translation, this means it can catalogue your images á la Photos or the older Aperture, and also specialises in readying RAW images for consumption by other apps like layout software or even rival image editors. Capture One Pro boasts that it’s compatible with the RAW image output of more than 400 cameras.

There are two ways to import images into Capture One Pro.

The first is to create a session. This is intended to be a quick and dynamic way of dealing with images straight from a camera. You can prune out the duds, for example, and apply tweaks to those you’d like to keep. Notably, a session lets you create several different file types in addition to an original. You might decide to output some high-res TIFFs for emailing to a client, for example, and a lower-res set for uploading to Facebook.

Once you’ve settled on the images you want to keep, you can move them into Capture One Pro’s second type of image library, which is referred to as a catalogue. This is intended to be a more permanent home for your images, although you can still do things like edit images if you wish – and indeed, you can entirely ignore the session function if you wish and import straight from the camera into a catalogue.

When it comes to image editing, Capture One Pro is about polishing the diamond. It expects you, as a professional photographer, to be importing images that you’re already broadly happy with because you spent time thinking about the likes of composition, focusing and lighting out in the real word.

In other words, you won’t find in Capture One Pro tools like clone or heal brushes because the app isn’t interested in helping you turn a mundane image into something interesting, or creating an entirely new image via compositing several imaged together or applying a filter. For that kind of thing you’ll need a tool like Adobe Photoshop.

However, if your image isn’t perfectly exposed, or features chromatic aberration (distortions created by the lens), or has some other annoying fault unavoidable when the image was captured, then Capture One Pro can help. The folks behind it describe it as the most precise tool you’ll find but this won’t really mean much unless you’ve had your screen and output devices properly calibrated.

Capture One Pro’s tools are unique in design and function to reflect this accuracy. As just one example of many, Capture One Pro is massively more advanced than simply swiping a slider to boost saturation. Here you get a pie chart of the colour spectrum and can click within it, and then adjust smoothness, hue, saturation and lightness of just that individual colour.

You can really dig down into details to get the image perfect, although if you’re switching from a competitor product then there will certainly be a learning curve (a great many guides are provided to alleviate this).

Again, some of the editing tools anticipate working with RAW images. It’s not possible to use the lens correction tools on a JPEG file, for example. These let you fix the likes of distortion and chromatic aberration caused by certain lenses. However, in addition to tweaks, Capture One Pro also includes high-dynamic range adjustment and vignetting, that can be used to add viewer focus to an image.

Rather usefully, Capture One Pro lets you connect your Mac directly to your camera to capture images, which studio photographers will appreciate. Indeed, this is where Capture One Pro makes most sense because as soon as an image is captured, a photographer can fully evaluate it and see what scope there is for improvement.

Capture One Pro is available from Phase One here. But if you’d like to consider the alternatives, have a read of our guide to the best pro photo editors for Mac.