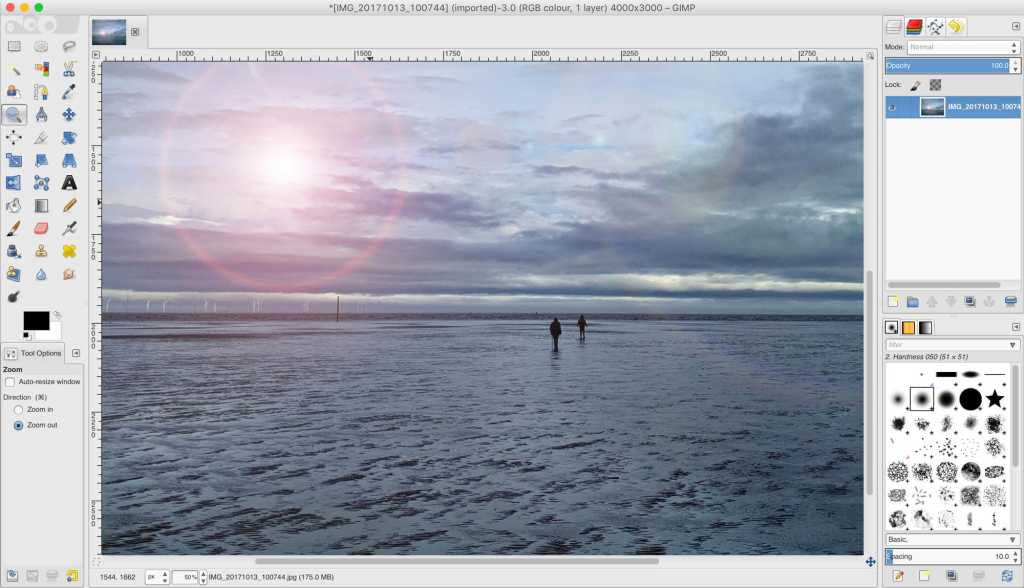 Despite the somewhat negative tone of this review, there’s much to recommend GIMP – especially if you literally can’t afford to spend any money but still need genuine image editing power above and beyond applying silly filters to images. We’re grateful GIMP exists simply for this reason. Indeed, you’ll find people who swear by GIMP. These people typically have a few characteristics. Firstly, prior to the GIMP they’d rarely if ever used an image editing application, so were essentially blank slates uninfluenced by the world of Adobe. More importantly, these individuals put in the hard work to learn how to use GIMP. We reckon it’ll take about a month of occasional use to become competent and relaxed enough to actually enjoy using GIMP. And if you can do that then, bugs and lacklustre performance set aside, GIMP can become an incredibly powerful bit of software.

GIMP has historically been problematic on the Mac platform for several reasons.

The first is that it’s non-native, which is to say, GIMP is really a port of a Linux/Unix app. This is true of many open-source applications, of which GIMP is one, and it certainly feels more at home on something like Linux. On macOS it looks alien and its interface feels overly complicated. However, this issue can easily be overlooked once familiarity builds, especially if the feature set makes it worthwhile.

But this leads us directly to the second reason why GIMP is problematic: GIMP has always seemingly promised a powerful alternative to Photoshop, but the reality has always been that GIMP isn’t a clone of Photoshop and nor does it want to be. GIMP recreates many of the tools found in Photoshop, but the developers behind GIMP see absolutely no reason to mirror Photoshop’s way of doing things. As an open-source project, GIMP hasn’t any desire to pretend to be commercial software.

Take something as elementary as selecting an area of the image and then moving it. In Photoshop you would use any of the selection tools, then switch to the Move tool, and then drag. Job done.

It can all be a little baffling and this is a shame because GIMP has a truly tantalising feature set.

It’s true that in recent releases Photoshop has edged ahead with the likes of near-magic tools like context-aware fill, but GIMP does a neat impression of Photoshop maybe five years ago. In terms of brush-style tools you’ll find a heal tool, for example, although this requires you to Cmd+click to define an origin point from which a sample can be taken (yes, there is also a clone tool that works in the same way).

And when it comes to the likes of layers and/or masks, you’re going to find everything you’re used to within Photoshop – and in all likelihood, some more besides. It’s just that you might have to hunt to find it, and then will probably have to train yourself to use it when you do.

GIMP on the Mac is pretty slow. Applying filters like a blur to an image take several seconds to complete, for example. Sometimes it can seem like GIMP has crashed, especially when tweaking settings in dialog boxes. In reality the app is just working and the interface has become unresponsive while it does so. However, this performance is much better than the last time we reviewed GIMP, when it was simply unacceptable and rendered GIMP virtually useless. At least now GIMP is a usable app, albeit potentially frustrating if you hate waiting around.

There were also a handful of glitches here and there. Selecting presets in some dialog boxes caused their name not to appear, although the preset was indeed selected. This is confusing although something it’s arguably possible to live with. Additionally, clicking the OK button in some dialogs did nothing although hitting Enter was sufficient to “click” them. These kind of bugs are commonplace in open source software, unfortunately, especially those apps ported from another platform.

For a wide range of alternatives, read Best pro photo editors for Mac.