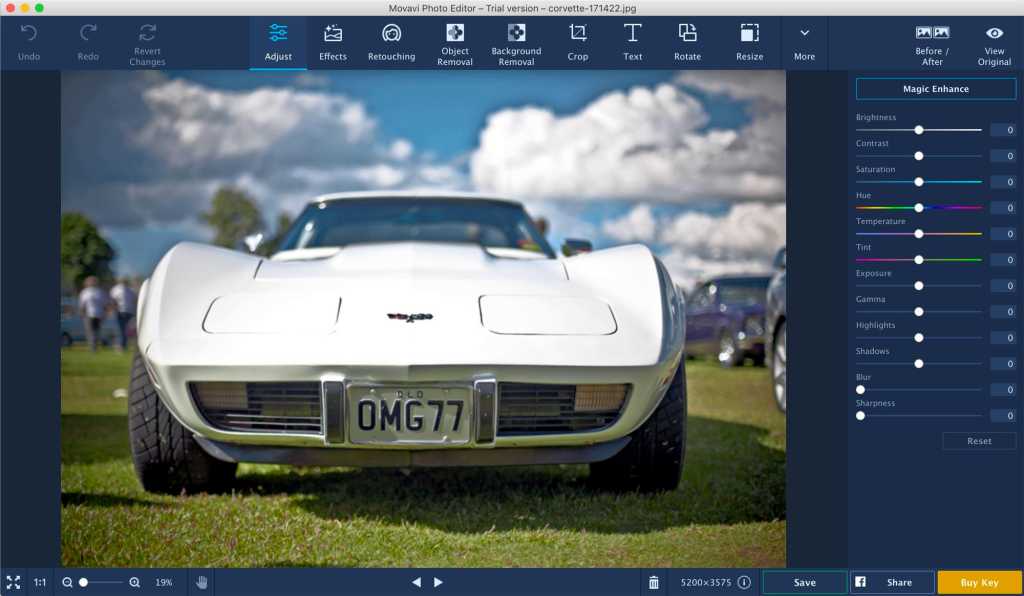 There might be promise in the one-click approach but it’s not there yet. Movavi Photo Editor’s price puts it in the same bracket as the likes of Pixelmator or Affinity Photo, both of which are simply several times more impressive and useful, and are to be recommended instead.

Adobe Lightroom, along with the now-deceased Aperture app, showed that there’s space in the pro-grade image-editing marketplace for apps that offer quick fix solutions, whether that’s to correct trivial errors like less-than-perfect exposure, or to do things like subtly adjust an image’s overall histogram plot.

Of course, there are many Mac image-editing apps of a one-click nature out there, but typically they’re aimed at the lower end of the market. Movavi Photo Editor has one foot in this camp but has some tools that could make it a useful installation for professionals.

Chief amongst them is Object Removal, which lets you define an area of the image that will then be magically removed. Everything from facial blemishes to telegraph wires to photobombing seagulls can be eradicated by using the provided brush tool to draw over the object, although there’s also lasso and magic wand selection tools for this purpose. The end results are impressive provided you make good use of the Variation slider to avoid the tool becoming too aggressive (or tame). There’s also a standard clone brush tool to fix any mistakes, or indeed remove objects manually if you wish.

Alas, the second big hitter within the app – Background Removal – was less impressive in our tests. This supposedly isolates a subject from its background, and requires you do define not only the object you want to keep, but also the background you wish to remove. Results in our tests were akin to somebody who’s new to Photoshop using the lasso selection tool to cut something out – messy and very likely to be unusable. We’re sure if you spend time zooming in and finely defining the object and its background then you might have better results but if we have that kind of time and energy available for editing then we’d fire up a “proper” image editor like Photoshop instead.

The tools under the Retouching tab unfortunately aren’t much better. In theory they offer a variety of simple yet effective tools to improve an image, especially when it comes to portrait pictures. For example, you can remove the shine from cheeks, and even iron out wrinkles. Unfortunately, many of these options turned out to be simple brush tools that had no intelligence built in. Using the Lip Color tool simply attempted to apply a colour tint to where we clicked within the image, for example, and if we strayed beyond the lips then Movavi Photo Editor simply didn’t realise and coloured the skin a different colour too. Again, we’re not sure what this offers above and beyond using a “proper” image editor.

Other tools provided with Movavi Photo Editor include the usual sliders to adjust brightness, exposure, sharpness, and so on, as well as the ability to rotate, crop, and resize. There’s a number of filters but these are no better (or worse) than you’ll find in most Instagram-style apps, and it’s hard to imagine a professional ever using them. We noticed that some of them took several seconds to be applied, too, which is unacceptable.

Buy from Movavi here. Or read our roundup of the best pro photo editors for Mac, which covers the best alternatives.