We are pleased that Apple has finally started to offer what can be considered a professional machine in the 13in form. There is no longer such a world of difference between the 13in and 15in MacBook Pro, apart from graphics power with the integrated Intel GPU in the 13in model holding it back. If you aren’t a creative pro, but you need a pro machine, then we think the 13in MacBook Pro will do you proud. Note that the 2018 models have now been updated in 2019 with slightly faster processors, but are otherwise the same.

New for 2018 are two 13in MacBook Pro laptops with 2.3GHz quad-core Coffee Lake processors. That’s not just a leap in processor generation – it’s twice as many cores, up from the 2017 model’s dual-core set up.

We’ve got our hands on a 13in MacBook Pro and have put it through its paces to see whether it can finally be considered a pro machine so here’s our full review.

The actual 2018 laptops have received a small spec bump for 2019 with faster 8th-gen Intel processors. They’re still Core i5 quad-core chips but are now at 2.4- instead of 2.3GHz and can TurboBoost to 4.1- instead of 3.8GHz.

There is a world of difference between the entry-level models without a Touch Bar and the two models with the Touch Bar, as you will see if you read our Which MacBook Pro article.

Please note that the 13in MacBook Pro we tested here was the build-to-order, 2.7GHz quad-core i7 (this has since been bumped to 2.8GHz), loaded with 16GB RAM. This machine would retail at £2,399, which is a fraction above the entry-level 15in model (which has 6-cores).

If you decide this machine is right for your needs, you can spec your MacBook Pro on Apple’s website – click here for the UK store and here for the US store. For more general advice, remember to check out our MacBook buying guide. 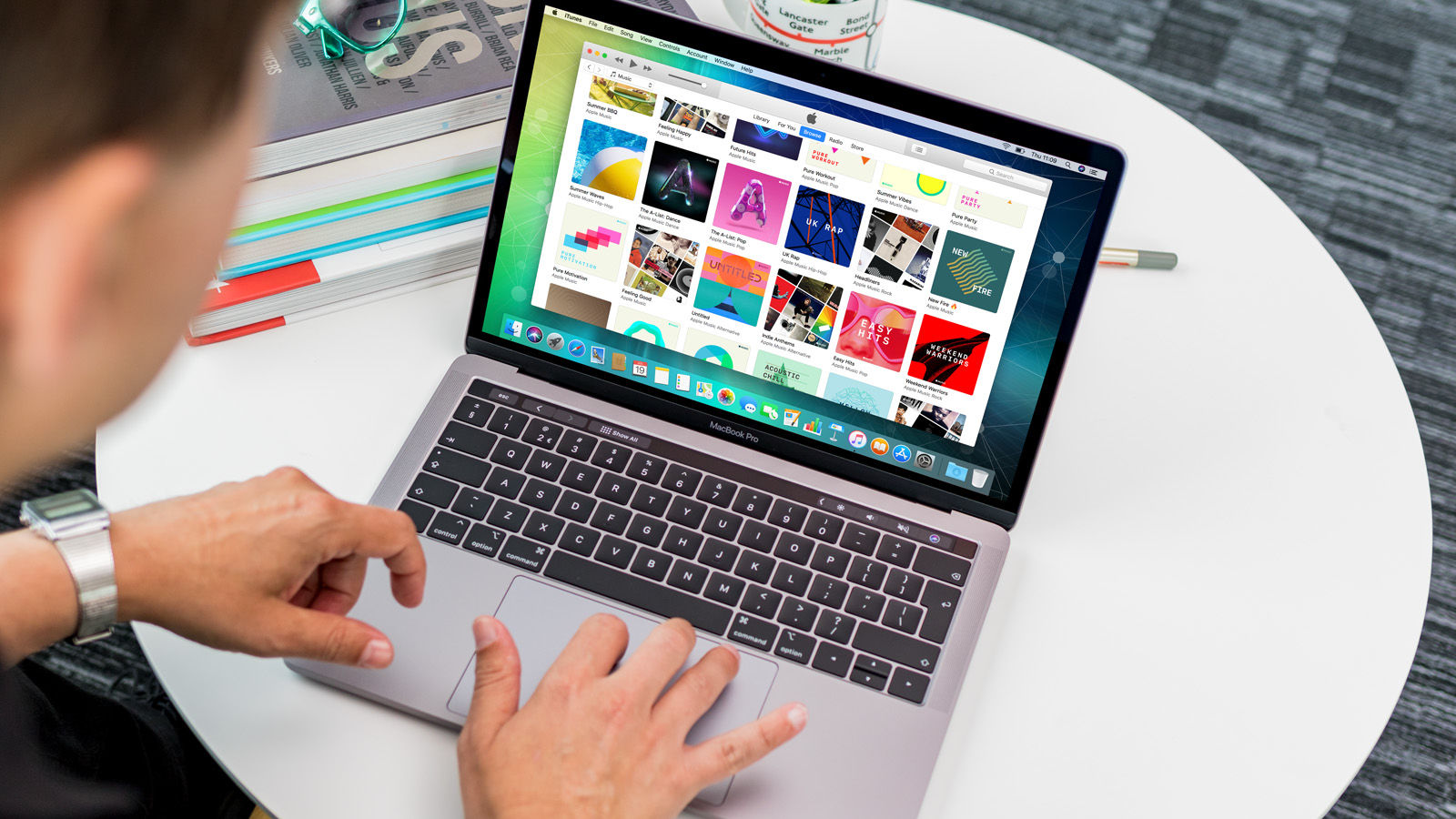 Available in silver or the darker Space Grey (that’s Space Grey in the image above), the two 2018 models of the 13in MacBook Pro look the same as the the 2017 models – in fact the external design hasn’t changed since October 2016 when the 13-inch model gained a trackpad that was nearly 50% bigger than the previous generation. However, the new models benefit from True Tone technology for the Retina display and under-the-cover enhancements to the keyboard (we’ll look in more detail at these changes below).

We prefer the more compact design of the newer MacBook Pro when compared to the 13in Air which Apple hasn’t updated in four years (although there are rumours that a new 13in MacBook is in the works at Apple which may be even smaller and lighter.)

Find out why you shouldn’t buy the non-Touch Bar 13in MacBook Pro.

One of the most significant changes is to the keyboard, although Apple is doing its best to underplay it.

There have been reports that the keyboard on the previous generation of MacBook Pro (and the MacBook) – characterised by a ‘butterfly’ mechanism underneath the keys – could be rendered useless by trapped dust and debris. You can read about the keyboard issues, and Apple’s repair program, here.

Apple has made some adjustments to the keyboard in the new models that – in addition to quietening the keys – may go some way to combat this problem.

Beneath the new keyboard is a silicone barrier that cocoons the butterfly switches underneath the keys. While this silicon barrier results in quieter keystrokes, which Apple is promoting, the presence of this silicon barrier should mean that dust can’t get under the keys. Apple’s not drawing attention to this latter point, but the changes made match those detailed in an Apple patent application which sought to address the issue. 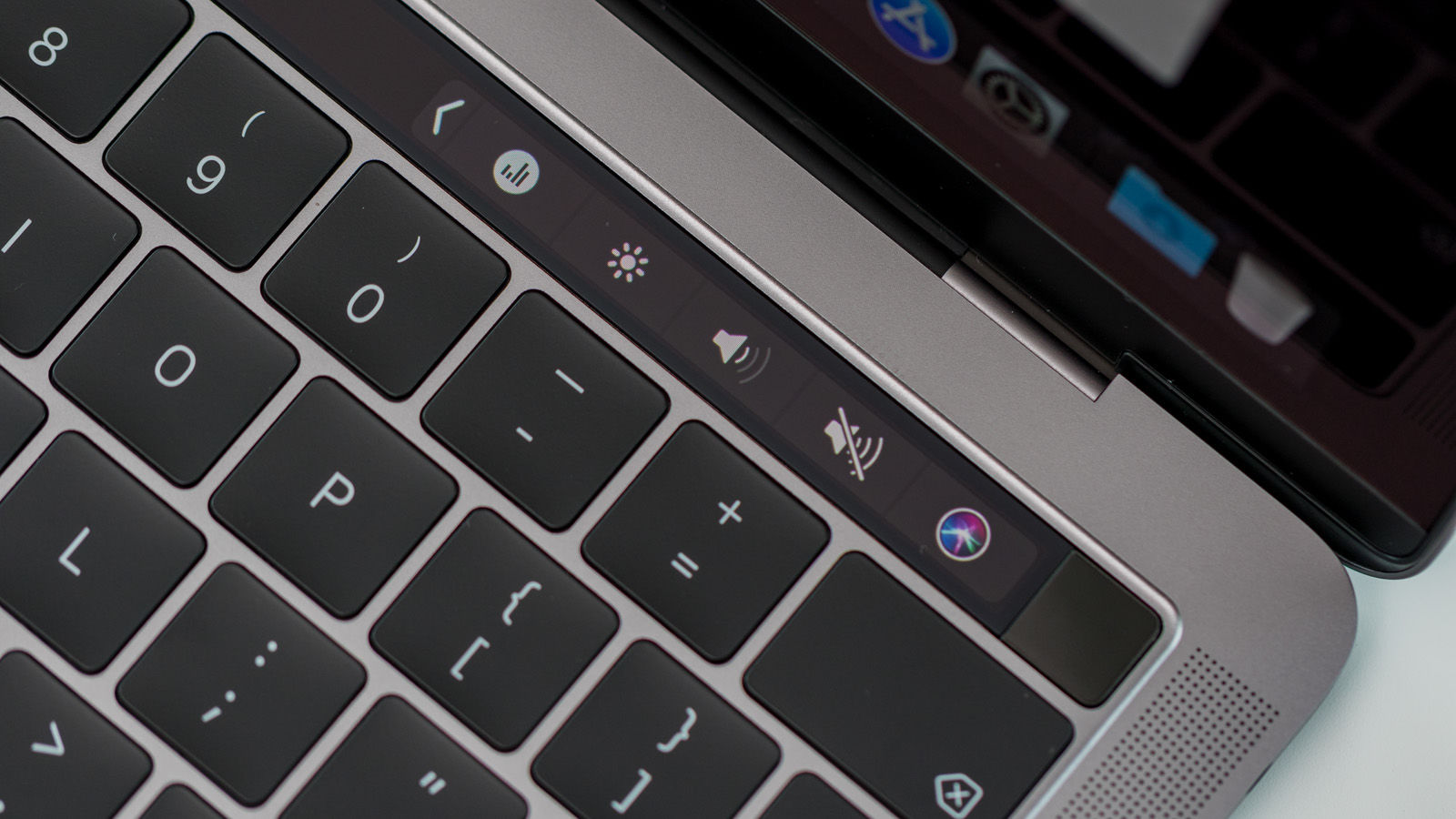 Repair site iFixIt ran some ‘ torture tests’ on the new MacBook Pro and found that “just like last time, a few poorly placed particles bring the mighty butterfly down to earth, never to click again.”

However, it’s unlikely that a MacBook Pro would actually encounter the kind of stress testing iFixIt ran, so it’s probably fine to use the new MacBook Pro in a dusty environment (although we’d advise against using it on the beach).

We were concerned that the changes beneath the keyboard would reduce the clicky nature of the keystrokes, which we find reassuring when typing. In use the keystrokes don’t feel spongy as we had feared, but we still prefer typing on our older, pre-2016, MacBook Pro keyboard.

The problem we had with the MacBook Pro trackpad also remains: when typing on the MacBook Pro keyboard from time to time the curser jumps about because our hand has activated the trackpad when we were leaning on it.

The keyboard feature that differentiates the 2018 13in MacBook Pro from the cheaper 2017 models that are still on sale is the Touch Bar.

Our opinion of this feature hasn’t really changed since it was introduced in 2016: it’s a novelty feature that isn’t helped by the fact that Apple hasn’t added it to any other Mac – and as a result of which, only a few third-party apps take advantage of it. The Touch Bar allows app developers to build in shortcuts to tools that can be accessed just by tapping or swiping on the Touch Bar. So in Photoshop, for example, you can adjust image brightness by swiping up and down on the bar. 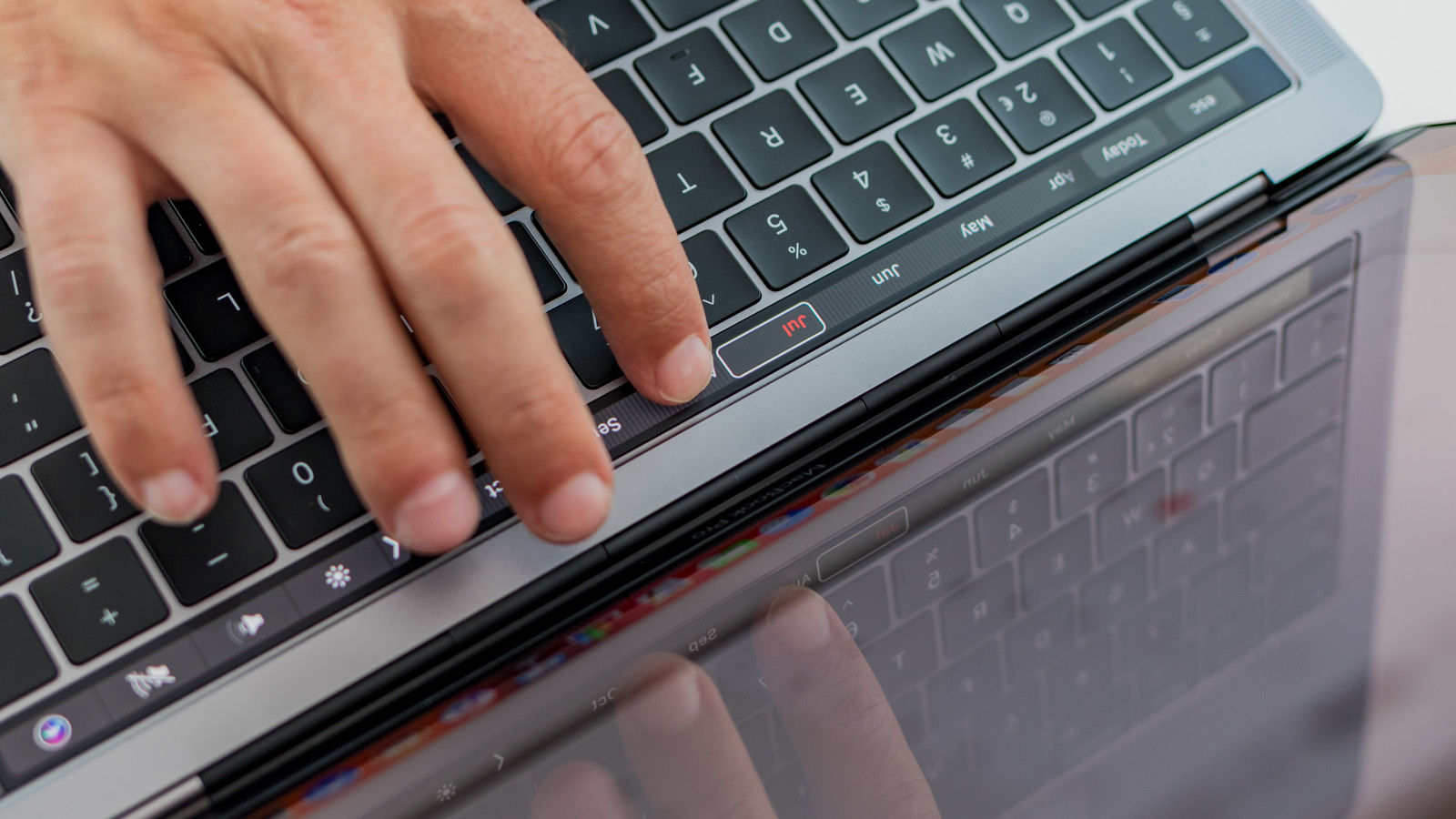 We do like the fact that you can see and select auto-suggestions and spelling corrections just by tapping on them though.

Got a MacBook, Pro or Air? Check out the best accessories for MacBooks.

As we mentioned above, the other big difference in the 2018 model is the introduction of True Tone to the Retina display.

True Tone first appeared on the iPad Pro in 2016 before arriving on the iPhone X and iPhone 8 in 2017. It is a technology that adjusts colour and brightness according to the lighting conditions, so you should experience less eye-strain and the content should look more natural.

We turned the brightness up on the screen of a new 13in MacBook Pro and an older, 2015 MacBook Pro, to see how much of a difference True Tone would make in various lighting conditions. Right from the start it was clear that the colours are brighter and clearer on the newer model, and there is more definition in the black areas.

We tested the True Tone capabilities inside a tent, to see how well the monitor adjusted for the red lighting, and colours remained brighter. We viewed a white screen in these conditions and found the True Tone screen to be more yellow while the older model had more of a blue tint. The yellower tones would certainly be more suited to working in a darkened room as it would cause less eye strain. 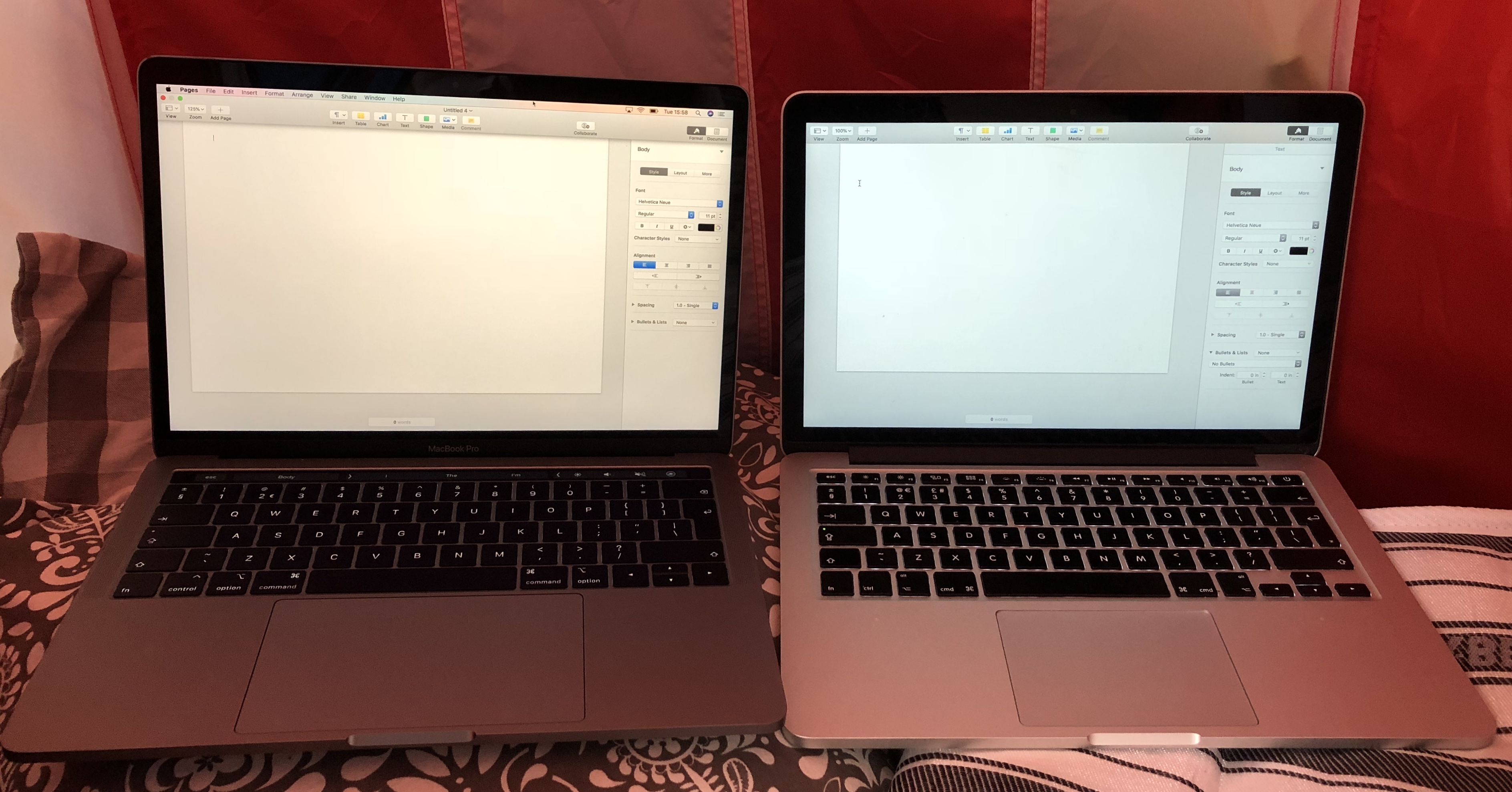 The two models of 13in MacBook Pro that are new for 2018 offer the following specs as standard. As mentioned above, the processor has been updated for 2019.

The non-Touch Bar models offer 2.3GHz dual-core i5 Kaby Lake processors with Turbo Boost up to 3.6GHz and 64MB or eDRAM.

Build to order options include:

We ran a collection of benchmarks to test the performance of the 13in MacBook Pro. As we mentioned above, the machine we had to review was the build-to-order model with i7 processor and 16GB RAM, a bump that takes the model up to the same price point as the entry-level 15in MacBook Pro.

Another thing to note is that we ran benchmarks before and after Apple issued the Supplemental Update that addressed an issue where early MacBook Pro models were being throttled when they reached high temperatures. We found that following the update there was a significant difference in the scores relating to the graphics processing.

The 13in MacBook averaged 18,570 in multi-core segment of Geekbench 4.2’s CPU test. This is a test of pure processing speed, and higher scores are better.

These results dwarf the multi-core score from the 2017 3.1GHz 13in MacBook Pro we tested back then. Thanks to the quad-core Coffee Lake chips this 13in MacBook Pro can finally be considered a pro machine.

We used AJA System Test Lite to evaluate storage performance (higher scores are better). The AJA test is designed with digital video and post production needs in mind and emulates the writing and reading of video files to and from the SSD. (We tested using the settings 5K RED, 4GB, single file and disk cache disable.)

In terms of read speed this was only slightly behind the iMac Pro, and it beat that machine in terms of write speed.

It is possible that changes in the operating system are partly responsible for the speed improvements. We are testing in High Sierra, which has a number of features that could have an impact on drive speed, including the move to the new APFS (Apple File System). It should also be noted that the machine we had on loan had 2TB SSD.

We ran the Unigine Valley Benchmark to evaluate performance and stability under high graphical workloads. We used the Extreme HD presets.

Bearing in mind that while better than the 2017 model, the 13in MacBook Pro still has an integrated Intel graphics card in 2018, so it’s not able to achieve the kinds of performance seen with the 2017 15in MacBook Pro, which managed a score of 789.

However, we also ran some of the same tests when plugged into a Blackmagic eGPU that featured the Radeon Pro 580. The boost given by the eGPU was astounding. Managing a score of 1,438, and a average framerate of 34.4fps (mac 62.3fps). As a point of comparison the 2.9GHz 15in MacBook Pro in 2017 managed a score of 1,438, so this looks like quite a capable machine, should you pair it with an eGPU.

We also ran Cinebench to tests the system’s ability to render 3D scenes, stressing both CPU and GPU. Again, higher scores are better. As would be expected, the 13in MacBook Pro with its integrated GPU didn’t perform as well as those machines with a discrete GPU.

As with the 2017 model, the 2018 MacBook Pro has stereo speakers with high dynamic range. There are also three microphones, while the non Touch Bar model only has two).

Apple claims Up to 10 hours battery life – its tests include surfing the web over Wi-Fi and watching films in iTunes. This is the same battery life claim as Apple makes for all it’s Mac laptops – bar the MacBook Air, which is still listed as offering 12-hours battery.

When we ran our own set of battery tests, which involve a looping film set to run continuously until expiry, with the screen calibrated at 120cd/m2. It lasted 744 minutes – which is 12 hours and 24 minutes, that’s not only better than Apple’s claim, it’s also better than the 2018 15in model’s 580 minutes (or 9hours, 40 minutes). However, based on our collegues at Tech Advisor’s tests of some competing laptops, it looks like Mac suffer somewhat when it comes to battery life.