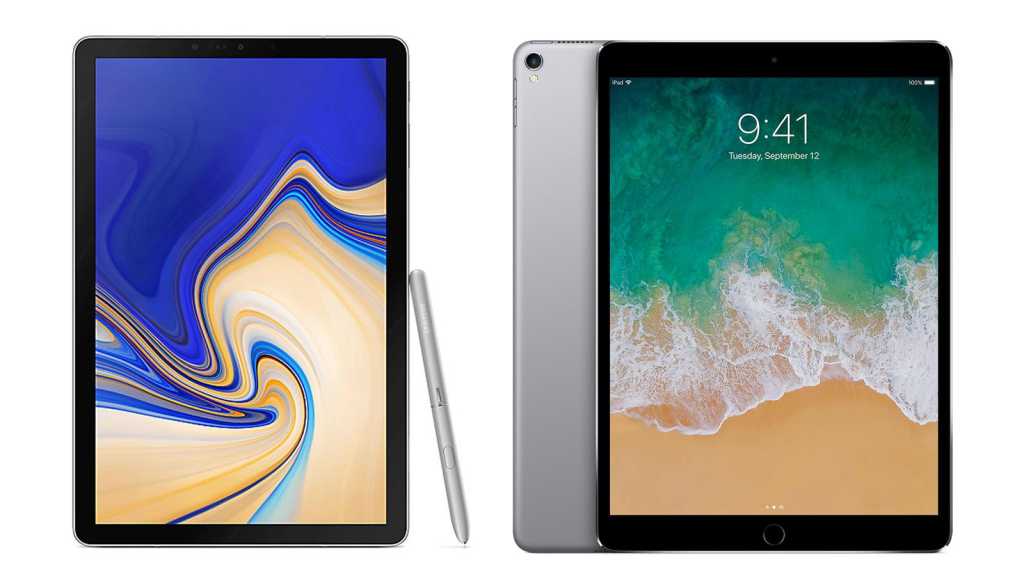 Overall, Apple’s iPad Pro 10.5 and Samsung’s Galaxy Tab S4 have a lot in common. They share the same screen size, the same productivity benefits and many of the same specs and features. The Tab S4 has the added benefit of the DeX interface for those looking for something closer to a laptop replacement, but iOS users will love the ease of use of the touch-friendly iOS 11 features including Files, Drag and Drop and Multitasking. The downside to the iPad Pro is its price, which quickly adds up if you’re looking for to add the keyboard and stylus. Plus, it’s possible that a new iPad Pro is on its way soon, as it’s been more than a year since Apple last updated it.

There’s a new iPad Pro rival in town: Samsung has unveiled its new Galaxy Tab S4. How does it compare to Apple’s tablet offering and which should you buy? Find out in our Galaxy Tab S4 vs iPad Pro 10.5 comparison.

Here are two tablets with very similar aims. They’re both designed to be a middle-ground between a tablet and a laptop, with powerful specs and productivity features like compatible keyboards and styluses.

They’re for university students, professional commuters, or anyone that finds laptops just a bit too cumbersome.

But they do have their differences, as we outline below. Much of it comes down to the software, so for some the decision will come down to a preference between iOS and Android (and the Samsung tablet stands out here thanks to its PC-like DeX interface), but if you’ve little loyalty to either operating system then the decision is not quite so clear cut.

Apple’s 10.5in iPad Pro is more than a year old now, after being released in June 2017. But as the newest model available it’s still the closest rival of Samsung’s latest tablet, the Galaxy Tab S4.

We don’t yet know when the Galaxy Tab S4 is coming out in the UK, but in the US it is set to go on sale on 10 August, which is the day after Samsung’s Unpacked event in New York (at which we expect to see the unveiling of the Galaxy Note 9 smartphone).

The iPad Pro is available to buy from Apple itself, or from resellers like Amazon, Currys PC World, KRCS, AO.com, Argos, Best Buy and New Egg.

Also worth considering is the optional keyboard cover. Both tablets are designed with productivity in mind so Apple and Samsung have designed keyboard cases to match, but neither come in the box. Apple’s Smart Keyboard costs £159/$159, while Samsung’s Book Cover Keyboard costs £119/$150.

However, the Tab S4 does include a stylus called the S Pen, while the Apple Pencil costs an additional £89/$99 and is available to buy from Apple.

Let’s take the 256GB WiFi-only model as an example of the sort of difference you could be looking at if you want the whole kit. 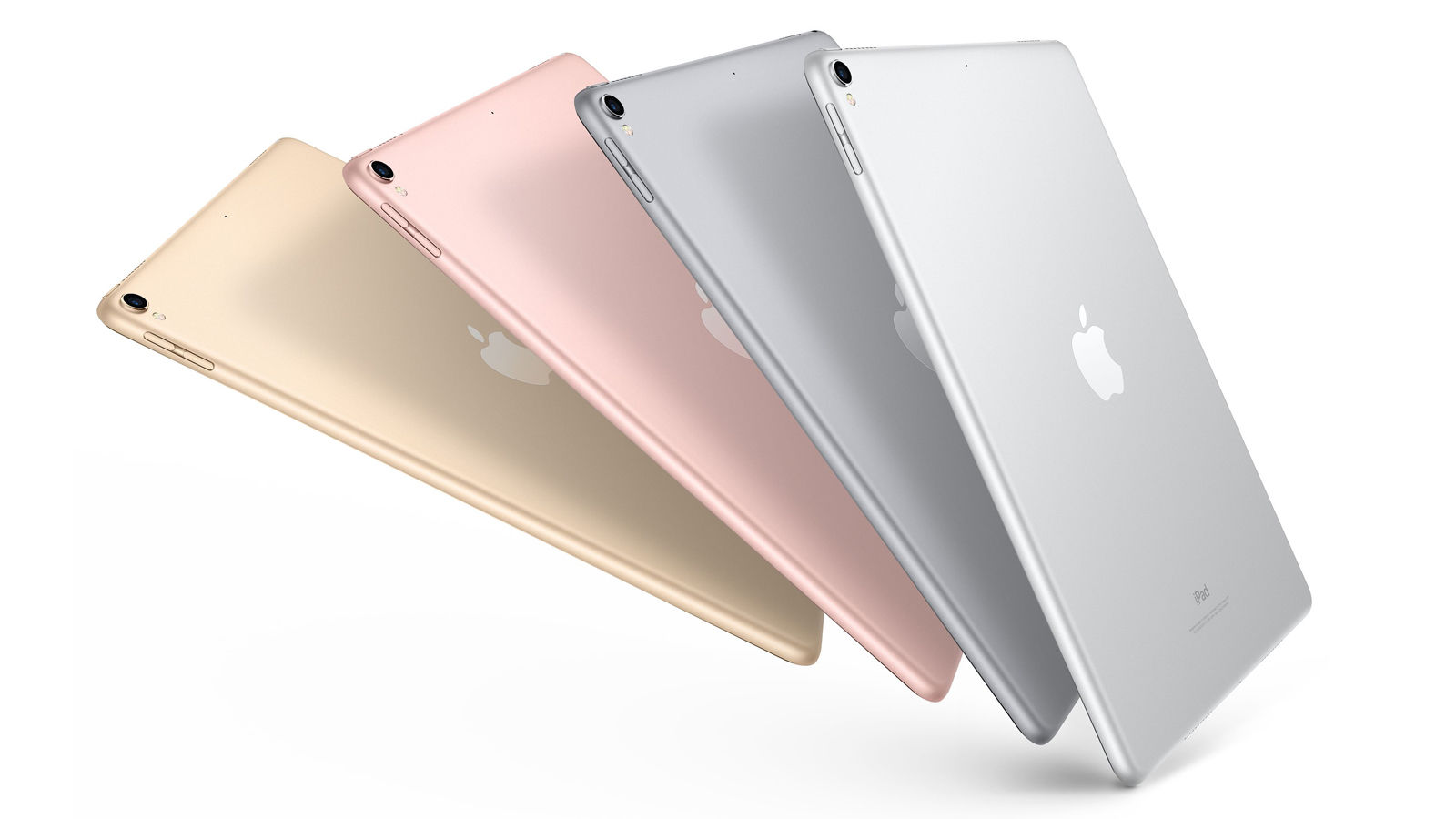 The iPad Pro and Tab S4 both have the same 10.5in screen size, but slightly different dimensions overall. The iPad is a a little bit taller than the Tab S4 but is a millimeter thinner at 6.1mm. It’s also a tiny bit lighter, at 469g vs the Tab S4’s 482g, but you’ll hardly notice a difference there.

Samsung has removed all physical buttons from the front of its tablet to make the bezels on the top and the bottom of the tablet smaller than the iPad Pro’s and equal on all sides.

The iPad Pro is available in Space Grey, Rose Gold, Gold and Silver and is made from aluminium, while the Tab S4 has two colour glass colour options: black or white. 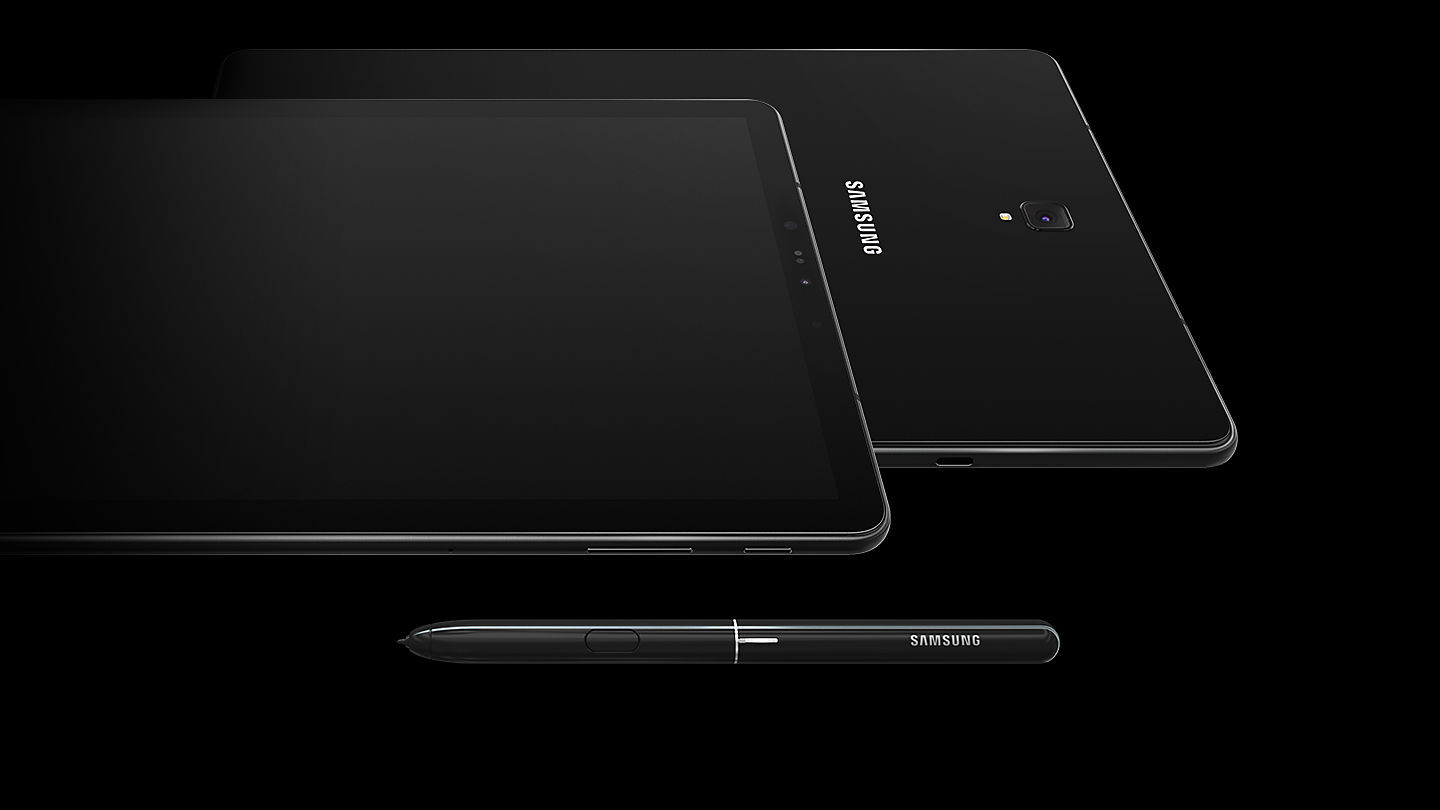 While both tablets feature the same size screen, but Samsung’s offering has a slightly higher pixel density at 287ppi vs 265ppi for the iPad Pro. That’s due to their respective 2560×1600 and 2224×1668 resolutions. They also have different ratios, with the Samsung screen featuring a 16:10 ratio and the iPad 4:3.

Under the hood of the iPad Pro is an Apple A10X Fusion chip, which has performed incredibly well in benchmark tests for speed and graphics power. Strangely, Samsung has chosen to power the Tab S4 with last year’s Qualcomm Snapdragon 835 processor, which has been superseded by the Snapdragon 845 as found in the Galaxy S9 so seems an unusual choice for a brand new premium tablet. Both have 4GB RAM.

The Tab S4 is available with 64GB or 256GB of built-in storage, while the iPad Pro adds a 512GB model into the mix. That said, there’s a dedicated microSD card slot in the Tab S4 that supports up to 512GB so you won’t miss out on that additional storage space should you feel you need it.

Both tablets have cameras on the front and back, but they have very slightly different specs and capabilities. 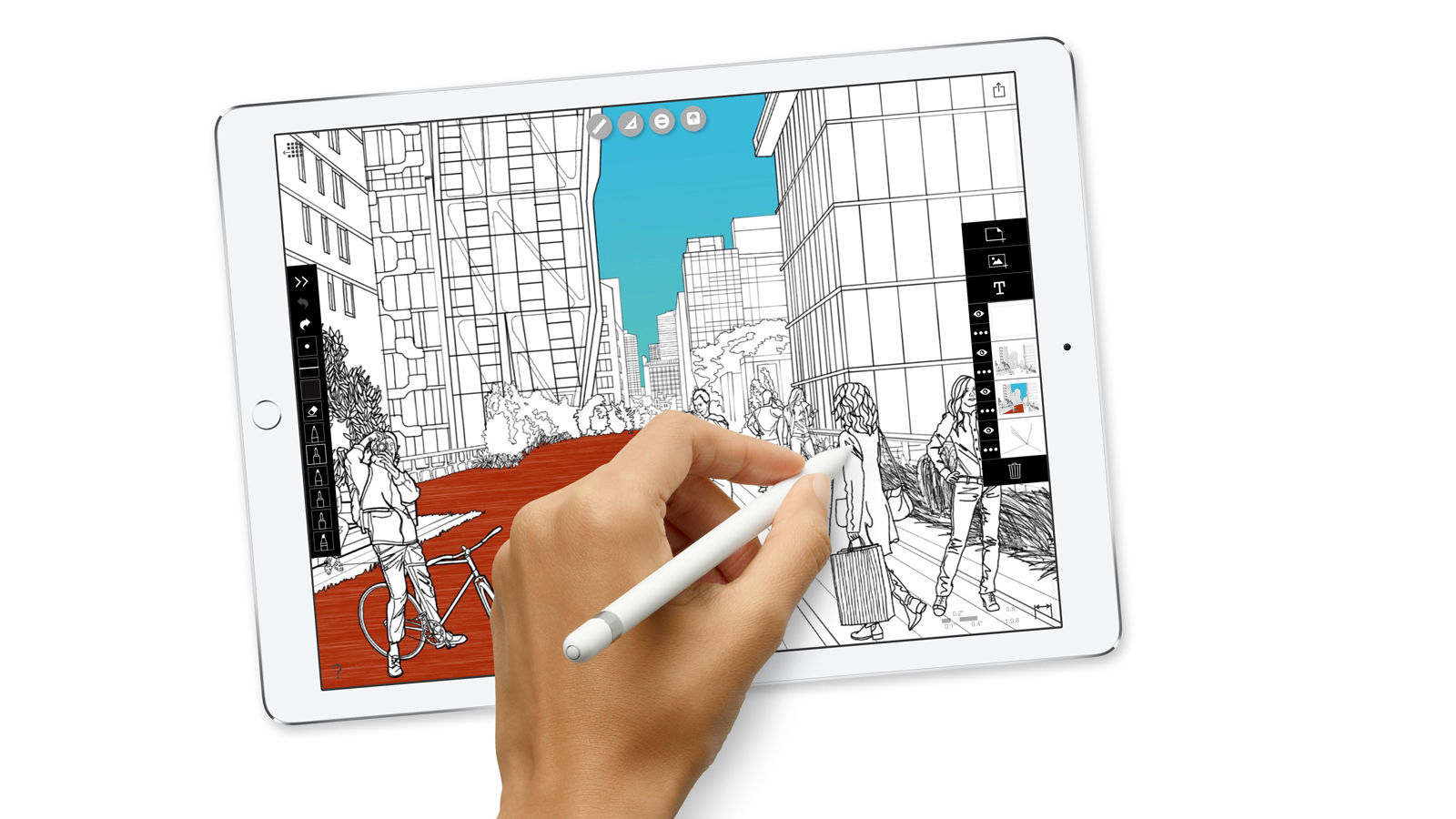 The iPad Pro’s rear camera is 12Mp, but includes optical image stabilisation and a Quad-LED dual-tone flash, which the Tab S4 misses out on despite an additional megapixel that brings it up to 13. The Tab S4 does have a single LED flash and autofocus, though, and is capable of capturing HDR photos and 2160p@30fps like the iPad can.

It’s a similar story for the front camera, with one Mp difference between them. The Tab S4 has an 8Mp selfie snapper while the iPad Pro’s is 7Mp. Both can capture 180p@30fps video.

The iPad Pro can be unlocked by a fingerprint sensor beneath the Home button, while the Tab S4 features an iris scanner instead. The batteries in both tablets are non-removable, and both are pretty huge. The iPad Pro’s is 8134mAh while the Tab S4’s is 7300.

Take a look at a side-by-side comparison of the specs in the table below: 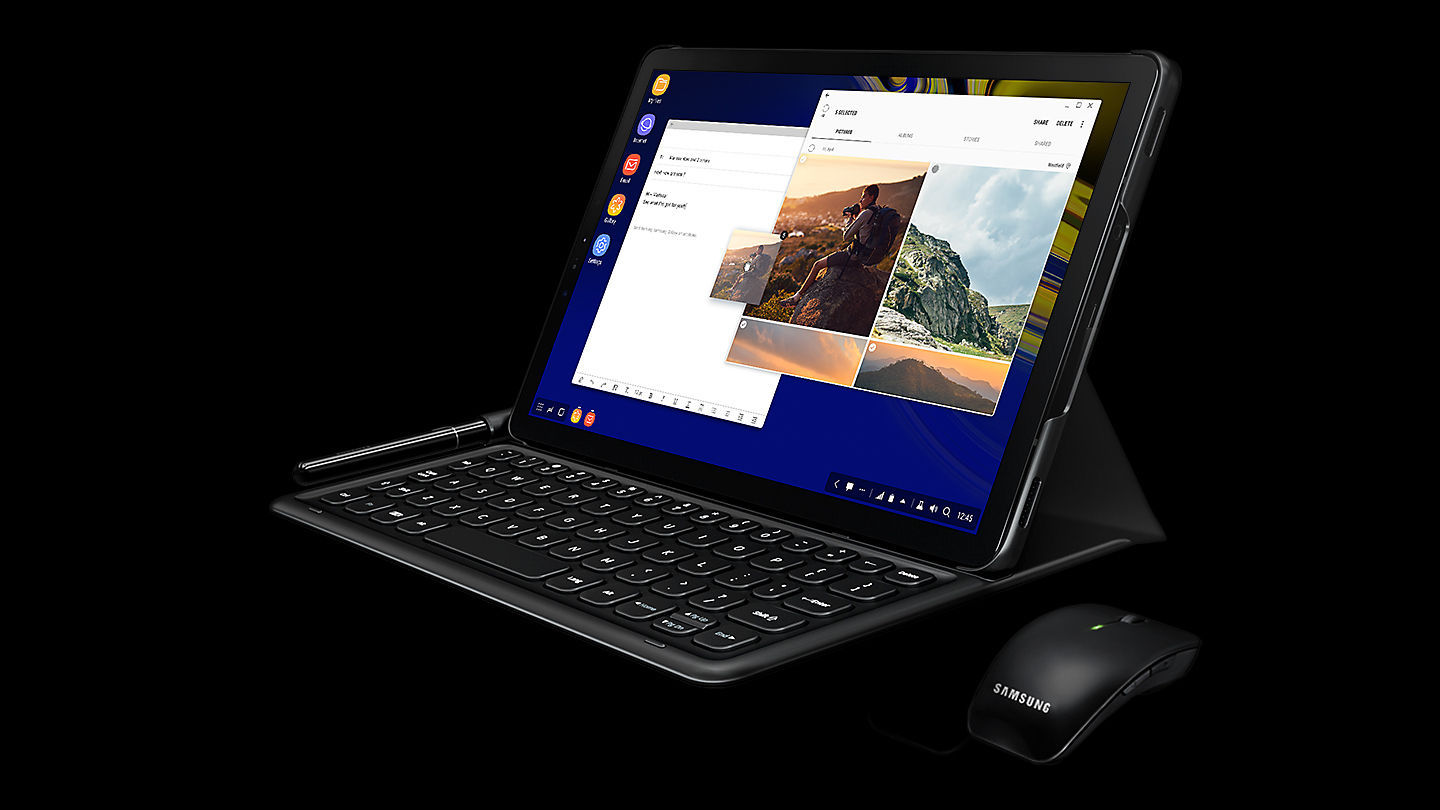 However, where the Tab S4 stands out from the crowd is with its DeX interface, which looks like something you’d expect to see on a PC. It supports up to 20 windows that can be expanded and resized, and there’s support for Bluetooth mouse functionality such as right click and drag and drop.