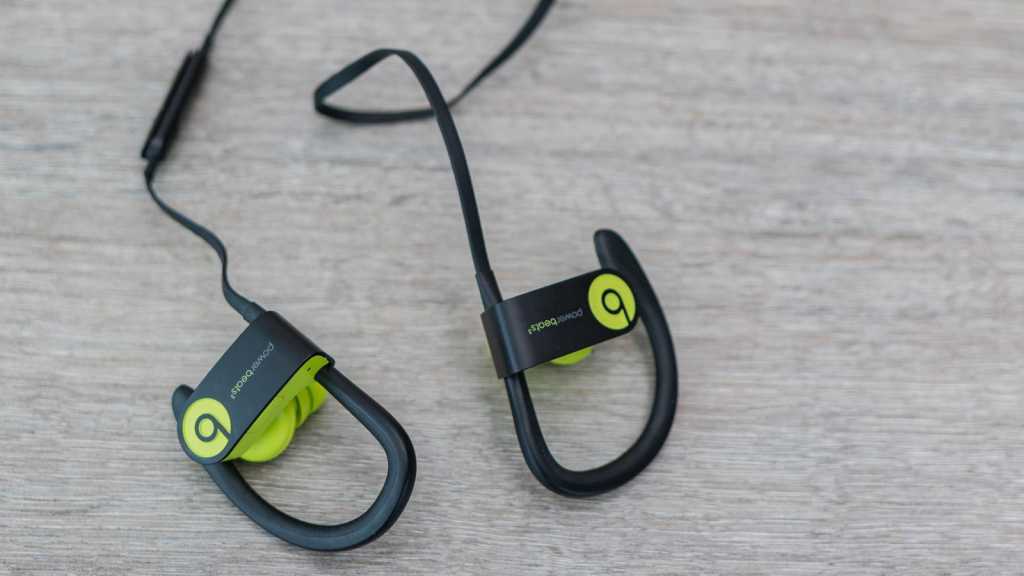 Price-wise these are on the high side for sporty headphones, but they do a fair job of justifying this. They stay on well and achieve a good, snug and largely sound-insulating fit, although clipping on the ear hooks can be a bit awkward. Design is fairly pleasing to the eye but also practical, with water resistance and drop protection well covered. The W1 chip means setup is a breeze for Apple users, and sound quality is good where it counts: loud, brutal beats. More delicate tunes are handled less deftly but really, who listens to classical music on a run?

The Beats audio range is known for its appeal to sportsmen, but mostly as a way of avoiding conversation while walking to and from the team coach. The Powerbeats3 Wireless, however, are suitable for use while actually doing exercise.

They’re Bluetooth-based with up to 12 hours of battery life (sufficient for almost six marathons), fast charge, sweat resistance and ear hooks so they don’t fall off your head. But are they any good? In our Powerbeats3 Wireless review we test and rate them for design, features, sound quality, specs and value for money.

For a roundup of other sporty options, read our group test of the best running headphones.

The Powerbeats3 headphones have an RRP of £169.95/$199.95 (you’ll find them at this price on Apple’s store), although we’ve seen them quite a bit cheaper on Amazon. They’re by a distance the most expensive of Beats’ earphone range (which starts at £89.95/$99.95), although in turn far cheaper than most of the firm’s on- and over-ear models.

These are smart-looking headphones. They come in a range of colours – we were sent, and admire, the classic black-and-lime option – but other than the ever-obvious Beats branding all have a simplicity and understated matt finish that suggest premium quality. 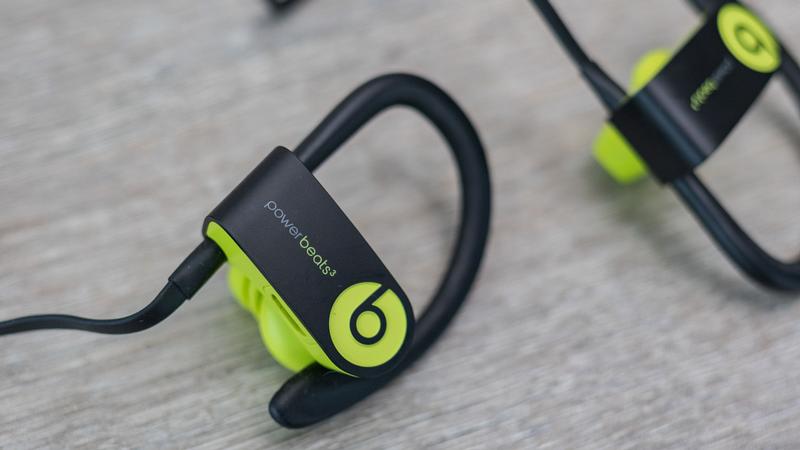 The lefthand bud has the charging port (a USB/mini USB cable is provided) and an inline remote appears on the left as well. This is easy enough to use (once you get used to reaching back slightly, instead of it hanging somewhere on your front), with a satisfactory click when raising or lowering volume. The central button serves for play/pause but if held down brings up Siri on the paired iPhone. 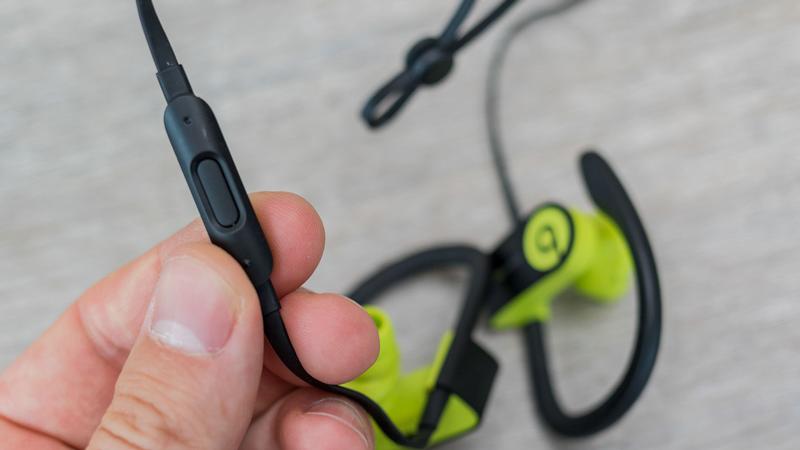 Accepted wisdom is that sporty earphones should not rely on ear-canal fit alone to keep them in place, and the Powerbeats use ear hooks: a large, semi-stiff, rubbery loop that goes over the top of the ear. These did their job – the Beats never fell off, in extensive testing – but they’re fiddly to put on because the hooks press quite tightly up against the bud. You almost have to prise the two bits apart to put them on, which is awkward at first, although it gets much easier with practice.

(Glasses wearers should also be warned that in general and particularly in this case, ear hooks aren’t ideal for us. We found it easiest to take our glasses off first and then put them back on after the Beats were in place.) 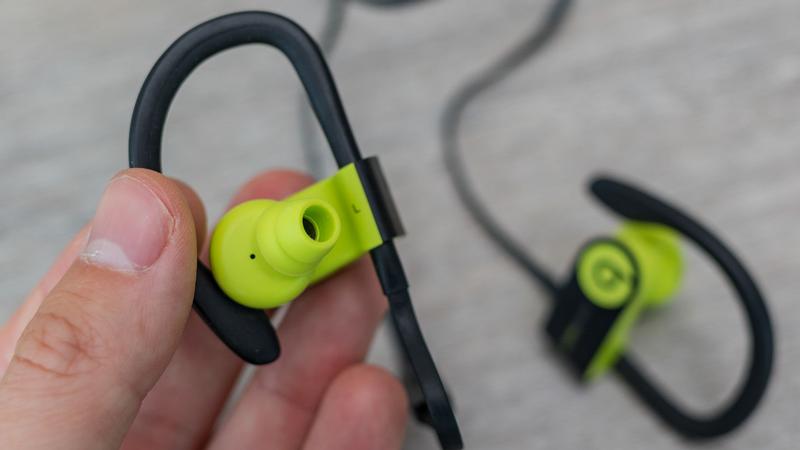 Fit itself is actually very good, leading us to wonder if the buds might even be able to stay in without the hooks. They come with four sets of tips, and as ever the double-flanged set did us proud, achieving a snug and largely insulating fit – indeed, with the volume cranked up to a decent lick, a colleague at the next desk described the leaked output as a whisper. Your mileage may vary, although most ear sizes should be catered for.

They’re wireless (Bluetooth) headphones, but there is a cable of sorts – connecting the two earphones to each other. This cable hangs down behind your neck and can be used to drape them about your shoulders if you need to take them out but don’t want to put them away. (A movable divider point in the cable allows you to adjust its length to suit.)

If you’re an Apple user – thanks to the inclusion of a W1 chip – setup is a breeze: hold your iPhone near a receptive set of Powerbeats and a little popup will let you pair them with one tap. This assumes you’re running iOS 10 or later. 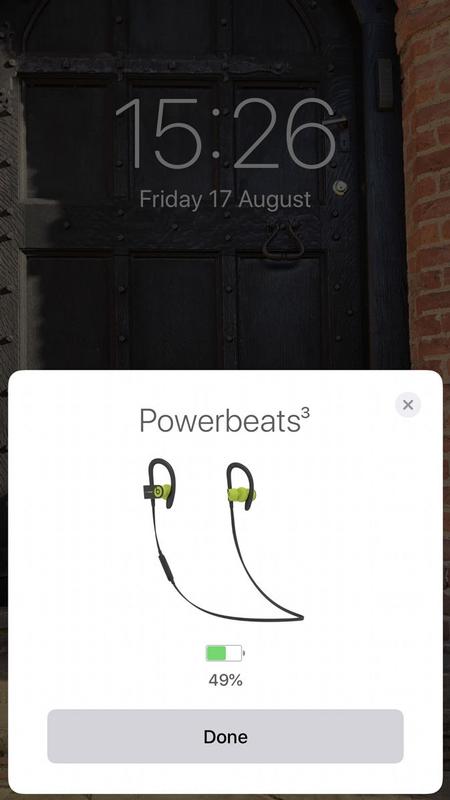 Weather and sweat resistance appear to be well catered for; Beats talks up the “necessary durability for strenuous workouts and weather” and this was borne out in our testing. They didn’t get especially grubby and certainly didn’t perform any worse for the heavy use. In terms of robustness we wouldn’t worry if they did fall out and land on the pavement, not that this was ever an issue.

And what of the all-important audio quality? Lower frequencies – the priority for running headphones – are superbly handled, with a muscular bass kick on dance and electropop (as highlighted on tester tracks Safe and Sound by Justice and LA Song by Fischerspooner).

Classical is less of a speciality, as you’d expect: the Glenn Gould piano tracks we tried were rendered with fair detail albeit not quite the warmth or depth you’d find elsewhere. An Oscar Peterson jazz number similarly lacked depth, and it felt like the double bass was given a shade more prominence than we’d have liked.