Skip to content
Home / Software / Reviews
Macworld
At a Glance

We don’t especially love the iPad Control Centre moving to the top right, presumably either for unity with the iPhone X handsets or because a notched/Home button-free iPad is about to be launched. Either way, it feels like extra confusion for no current benefit. But other than that small quibble (which doesn’t affect the iPhone at all), this is a no-brainer, and we recommend making the update right away. Performance is good on current devices and improved on older ones. Screen Time is a great and useful idea, well implemented. And that there are lots of other large and small changes throughout the update that improve life for iPhone and iPad users. It’s a shame that group FaceTime appears to have been delayed, but we can’t wait to try that out one too.

iOS 12 has been released to the world at last. Having installed and tried out the official update on our iPads & iPhones, as well as spending the past several months testing out various pre-release beta versions, we’re now ready to give our official verdict.

In our iOS 12 review we test and walk you through the highlight features in the new software for iPhone and iPad, and try to give an idea if you should update.

Note that since this article was written, Apple has announced the next version of iOS. Read our comparison review: iOS 13 vs iOS 12.

iOS 12 was first demonstrated at WWDC on 4 June 2018, and the first beta rolled out the same night. The finished, full release of iOS 12 took place on 17 Sept.

Updating your iPhone or iPad to iOS 12 is free. 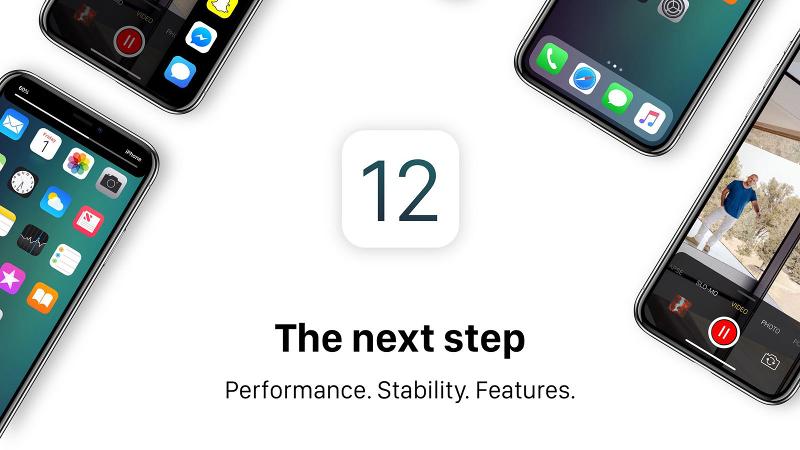 iPhone and iPad owners always dread having to again go through an interface change as dramatic as we saw in iOS 7.

That year the design was completely revamped, with simple flat imagery (sometimes in toxically bright colours) replacing quasi-realistic skeuomorphism throughout the system, and new icons for everything. In retrospect, and having seen the colours toned down a little, the post-iOS 7 style is easier on the eye. But it took a lot of getting used to.

This year, fortunately, there are no system-wide drastic changes – in fact hardly any notable interface changes at all. Notifications are organised more sensibly, as we’ll discuss later, and there’s one other tweak we want to talk about.

On iPad, for the second year in a row, Control Centre has moved. In iOS 10 you swiped up from the bottom and it just appeared; in iOS 11 you swiped up until the Dock appeared, then carried on swiping further; now you swipe down from the top right of the screen. 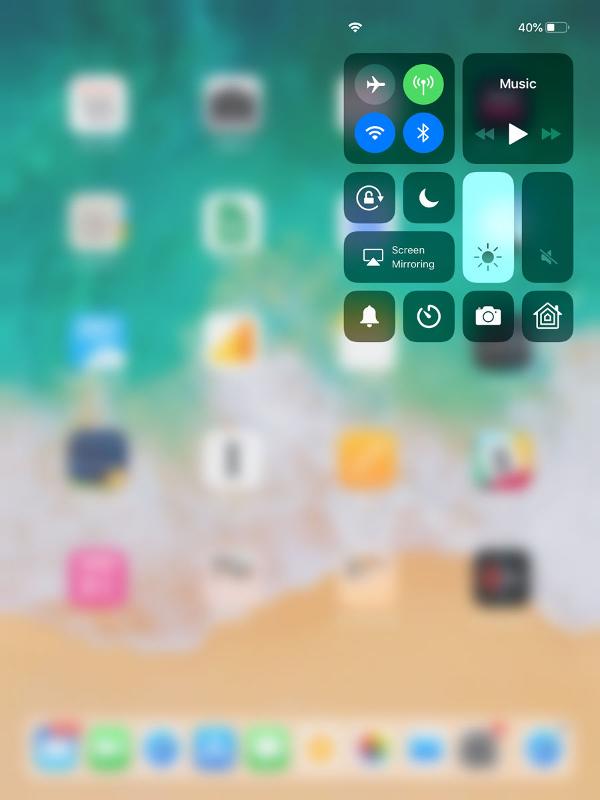 This has clearly been done to unify the interface with the iPhone X family, whose lack of a Home button required the invention of a new set of gestures. But it makes less sense here: iPads still have Home buttons, and they don’t have a notch at the top of the screen to rationalise there being separate left and right sections to swipe.

Most importantly, the top of the screen is getting crowded. On iPad there are now three separate functions activated by swiping down: from anywhere within the screen to bring up search and Siri suggestions; from the top left or centre to bring up notifications; and from top right to bring up Control Centre.

iPad owners will get used to it, just as iPhone X owners did last year, but it feels unnecessarily confusing, for the sake of arbitrary cross-product ‘neatness’. (The launch of notched iPads in future may change the unnecessary part of that, but it will still grate with owners of older models. Note that 7 Plus owners weren’t obliged to use iPhone X gestures last year.)

iPhone and iPad owners sometimes find that their devices slow down when they update iOS, because the new software makes greater demands on the processor. But Apple’s focus on performance in iOS 12 means that shouldn’t happen this time – and the company says older devices in particular may actually speed up.

During the WWDC demo it was claimed that by updating to iOS 12 an iPhone 6 Plus, for example, would see apps load up to 40% faster, the keyboard come up 50% faster and sliding to take a photo up to 70% faster.

On our new devices iOS 12 runs buttery smooth, but that’s hard to make much of, since those devices ran buttery smooth anyway. So we tested two older devices to see what difference iOS 12 would make.

We started with the 12.9in iPad Pro from 2015. A few years old now, but a very powerful machine in its day, this tablet still performs to a good standard. But already we were able to detect some improvements from the update.

Running iOS 11.2, the Pro recorded Geekbench 4 scores of 2953 (single-core) and 5264 (multicore). It took 24 seconds to reach the passcode screen from a total power off, and sliding from the lock screen to open the Camera app took between 0.8 and 1 second.

The beloved old iPhone 5s dates back to 2013, so we expected this to be a more dramatic change. The funny thing is that we saw larger increases than with the iPad Pro in some areas, but smaller ones in others. 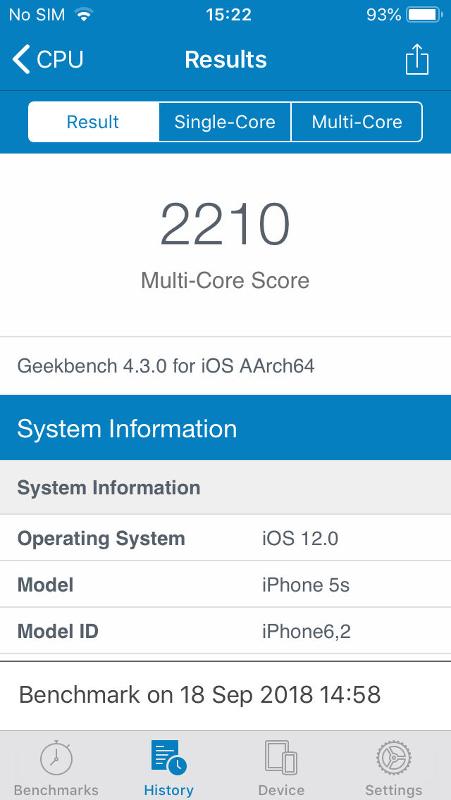 Pre-WWDC speculation predicted that iOS 12’s focus on performance would mean a lack of major new features. We’re pleased to report that this was not correct.

We’ll begin with a series of features that are, bizarrely, designed to make you use your phone or tablet less.

Screen Time is a new section of the Settings app where you can monitor your device usage. It reports on the amount of time you’ve spent in specified apps, categories of app or websites on a daily or weekly basis, the number of times you’ve picked up your device and the frequency and source of notifications. Armed with this information you can make changes to your routine, or get iOS to help by imposing limits. 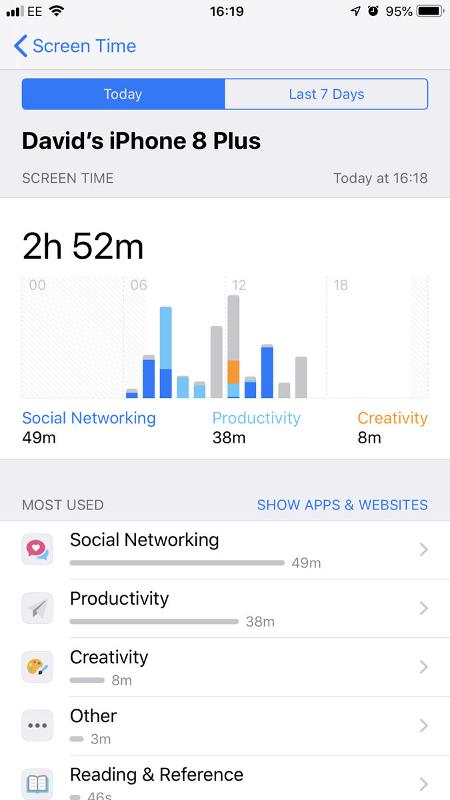 Everything is arranged in an intuitive way, with logical settings placed next to the information that is likely to prompt you to use them.

Notice, for instance, that Twitter hit you with a crazy number of notifications this week? Tap that bar and you’re taken to a screen where you can turn them off or change the banner style. Notice a game is using up too much of your day? Tap through and you can set a limit.

The only thing we regret is that iOS doesn’t integrate quite so helpfully the ability to block an app or website entirely. If an app – or particularly a website, which after all cannot be uninstalled – is taking over your life, it would be nice to tap through and see a big button marked Block. Instead, the most extreme action you can take is to impose a very low time limit, which feels messy.

Full blocks are available through Screen Time, but they’re accessed via the Content & Privacy Restrictions section – not a huge problem, but you really need to know where to look, and it’s nowhere near as convenient as the time limits.

Still, we suspect that most people will benefit from Screen Time, and parents (who can use Family Sharing to monitor and control their kids’ habits) will be particularly pleased. You may be shocked by the amount of time you’re wasting.

In a similar vein of helping people to be less tied to their devices, Apple has expanded its existing Do Not Disturb feature with a new mode that hides notifications during the preset Bedtime hours, even if you turn on the screen to check the time. You can catch up in the morning, which is almost certainly better for your mental and physical health.

The third and last change of this type concerns notifications themselves, so effective at pulling you from the real to the digital world.

Notifications are grouped by type on the lock screen, which makes them easier to manage (and is something we’ve been demanding for years), and you can firm-press the notification to fine-tune its settings or turn it off entirely. Much easier – and therefore much more likely to happen – than if you had to go into the Settings. 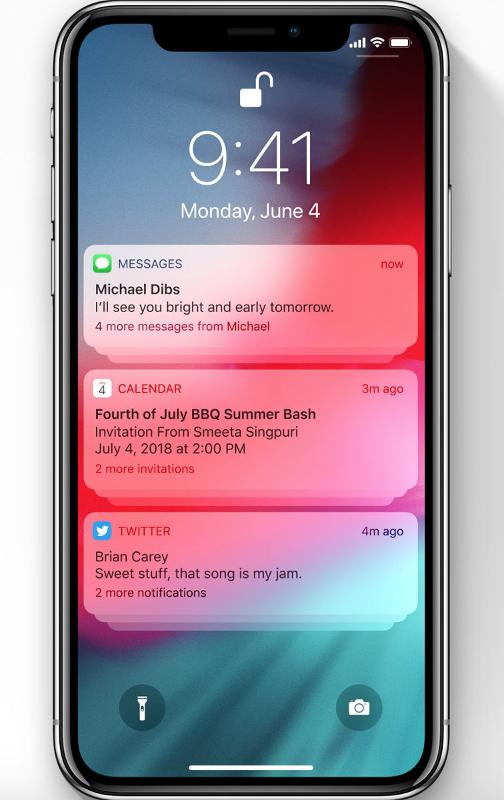 Apple’s going big on AR. Much of this concerns filetypes and dev support in ways that concern you only insofar as there will soon be a lot more AR content appearing in apps and mobile sites. But there’s also a new app called Measure, which uses AR principles to quickly and relatively accurately (if you need precise numbers, get out your tape measure!) get the dimensions of physical objects in the world around you. It’s fun and potentially useful.

One of the more eagerly awaited new features in iOS 12 is the ability to have more than two devices (and up to 32) on a FaceTime video call. The interface looks a bit kooky – it seems like it would be hard to make out what everyone is doing, although perhaps that’s inevitable – but it’s nevertheless a big step forward in an area where Apple has long lagged behind Skype, Google Hangouts and other video messaging services. 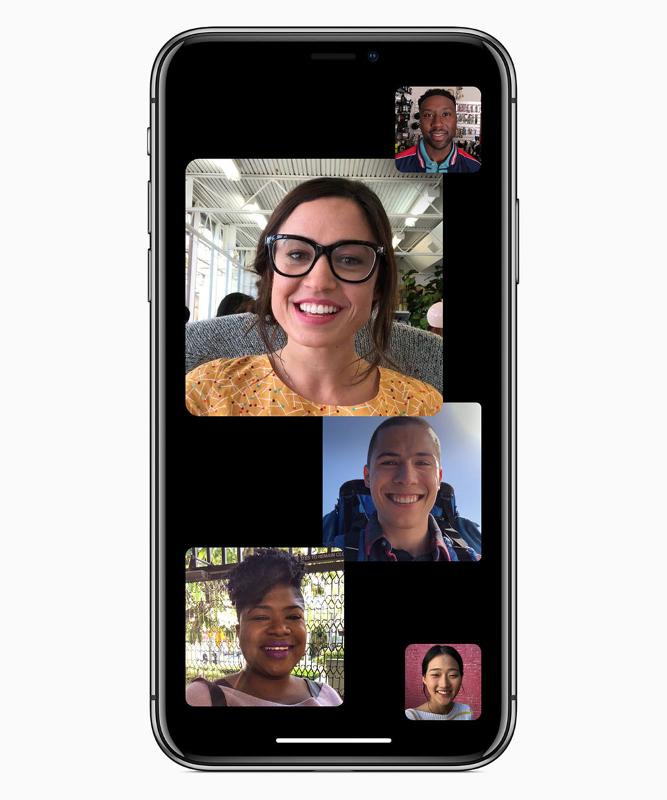 We make the above observations based only on the WWDC demo, because very sadly the feature was taken out of the beta in early August and won’t reappear until “later this [autumn]”.

This new feature lets you create custom multistep and even multi-app processes that will be activated by a spoken command or single button tap. (Remember that unlike the rest of the world, Apple applies the Siri branding to its full range of AI assistance functions, not just the voice stuff.)

We think this will be lots of fun to explore (the Shortcuts app hasn’t been released yet), but the more significant application of this may be when it’s used by third-party app developers. Companies can now create their own custom Siri commands within apps, set up and tied to your voice via an ‘Add to Siri’ button.

The Photos app has got a lot cleverer.

The arrangement of tabs along the bottom is a bit different, with a new section called For You (a bit like in the Music app) which unites shared activity and Memories. This frees up space for a search tab, because Apple wants to highlights how good Photos is getting at search.

Open the Search tab and Photos will show you some categories of photos it thinks you’ve got: babies, cars, playgrounds, nightclubs, food and so on. This information is generated intelligently, rather than via user-inputted metadata, and you can use more than one category at once, to narrow things down still further.

It’s all quite ambitious but the accuracy isn’t perfect just yet. We’ve seen rivers misidentified as lakes and rugby misidentified as football (both forgivable, although maybe a more generic label would be wise). More surprisingly, videogame screenshots containing vaguely square stone elements were referred to as fireplaces and pictures of people standing still indoors were labelled ‘sport’. 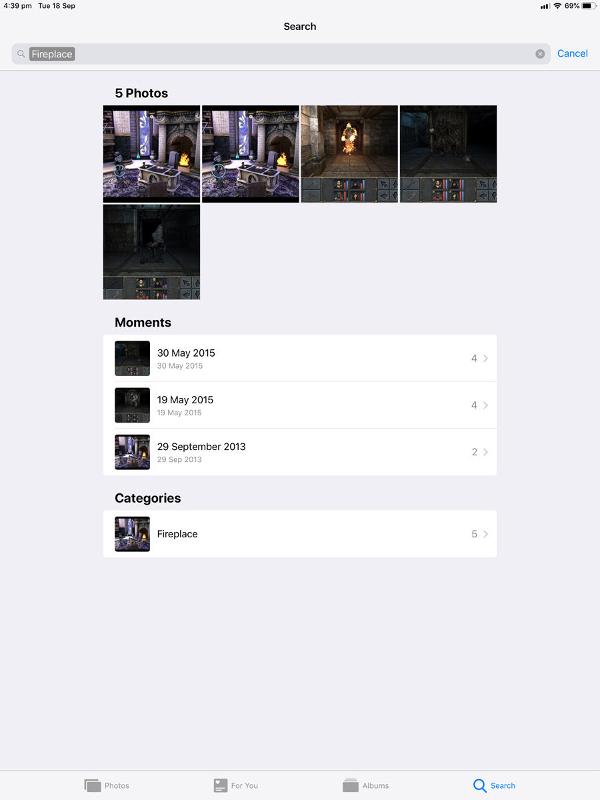 We feel a little harsh pointing out these mistakes, because most of the time iOS gets it right, and being able to combine category searches is very useful for those with enormous photo libraries. But we suspect that Google and others are further down the road of smart image recognition at this point.

Those are the headline changes in iOS 12, but there’s lots more.

Maps has been completely revamped and should in future be updated on a far more timely basis; you can create your own custom Animoji; News, Stocks, Voice Memos and iBooks have all been redesigned, and the latter is now called Apple Books.