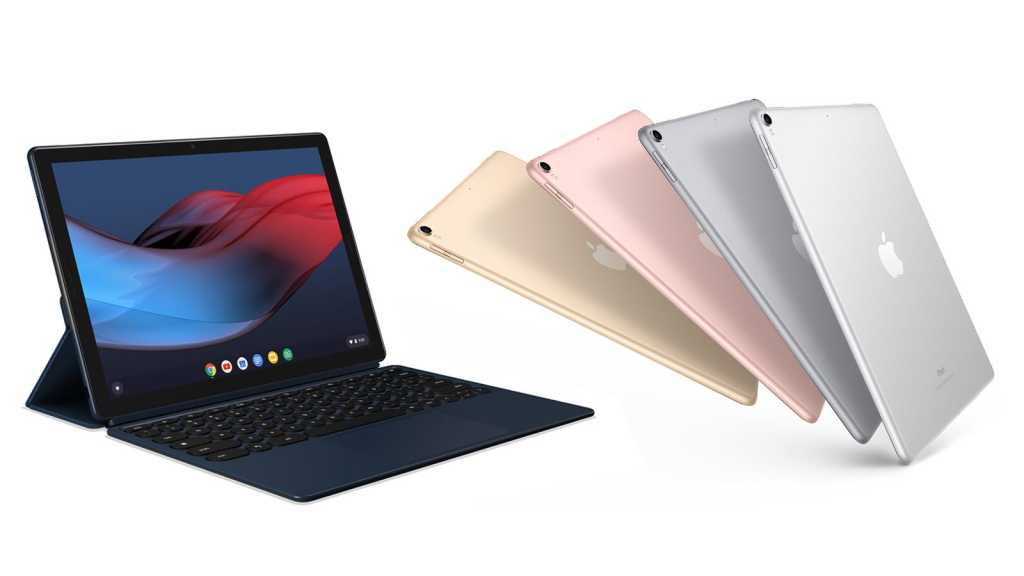 Both of these tablets are exemplary pieces of mobile hardware, with minor pluses and minuses in various areas. The Pixel has a bigger screen than the equivalently priced iPad, as well as a higher-capacity battery; Apple in turn offers more storage, a better main camera and a headphone port. The battle, then, really comes down to software. Partly this is an issue of familiarity – if you know iOS or Chrome OS well you probably won’t feel like making a change. But there’s also a difference in philosophy. Apple frequently markets the iPad Pro as a ‘computer’, ie as a laptop replacement. But it’s still based around a mobile touchscreen OS, and runs mobile apps, even if devs are increasingly finding ways to make proper office software work on a tablet. The Pixel Slate is much closer to offering a desktop experience, with a cursor and (if you shell out for the keyboard) trackpad, and the ability to run Chrome OS apps as well as Android ones. But that hybridisation comes with drawbacks too. It can be confusing using a device that is both laptop and tablet, many apps don’t work optimally on the Pixel Slate hardware, and the actual implementation of the OS is sometimes imperfect. Compare this to the rigorously policed experience you get on iOS, which is always smooth and slick and exactly the way Apple wants it to be, and is only allowed to run apps that have been optimised for its hardware.

The iPad dominates tablet ‘mindshare’ to such an extent that many people refer to the devices in general by Apple’s brand – like the Hoover of mobile technology. But there are plenty of pretenders to the throne: Samsung, Microsoft and now Google, which has announced a Pixel Slate tablet.

But has Apple got anything to worry about? In this article we put the Pixel Slate head to head with the iPad Pro range (focusing mainly on the 10.5in model, for pricing reasons) and compare them on design, features, specs and value for money.

The Pixel Slate starts at $599/£549: that’s the entry-level configuration, featuring an Intel Celeron processor, 4GB of RAM and 32GB of storage.

As for release date, all we know for the time being is that the Pixel Slate is coming “later this year”.

The 2017 iPad Pro models were launched in June of that year. They’ve been out for so long that pundits expect them to be upgraded in the near future, so we’d suggest holding off on any purchase until the end of October, when Apple’s next event is expected to be held. New iPad Pro models are likely to appear soon.

The Pros currently on sale start at £619/$649 – buy direct from Apple, or read our roundup of the best iPad deals. As with the Pixel Slate, that’s the most basic configuration, with a 10.5in screen, 64GB of storage and Wi-Fi connectivity. By upgrading to 512GB and adding cellular connectivity you can spend £1,099/$1,129, and the 12.9in model is even more expensive.

(Note those are your only upgrade options. All 2017 iPad Pro models come with an A10X processor and 4GB RAM.)

Both devices are tablets that can smoothly switch to laptop duty with the addition of a detachable keyboard (which costs extra). Only Google’s keyboard comes with a trackpad, because iOS doesn’t have an onscreen cursor. (You can read more about the differing software approaches later in this article.)

Both feel super-thin, too: the Slate is 7mm thick and the larger iPad is 6.9mm. The 10.5in iPad is 6.1mm thick. And the balance of the weight is in both cases beautifully judged.

The Pixel Slate comes in a (very dark) Midnight Blue colour, and the matt aluminium finish feels great, although our reviewer felt it was rather prone to fingerprints. The iPad Pro comes in silver, gold and Space Grey (in both sizes), and Rose Gold (for the 10.5in version only).

There’s not much to choose between the design of these two products, then, so why you don’t you look at some photos and make up your own mind… before we look into the all-important specs, features and software. 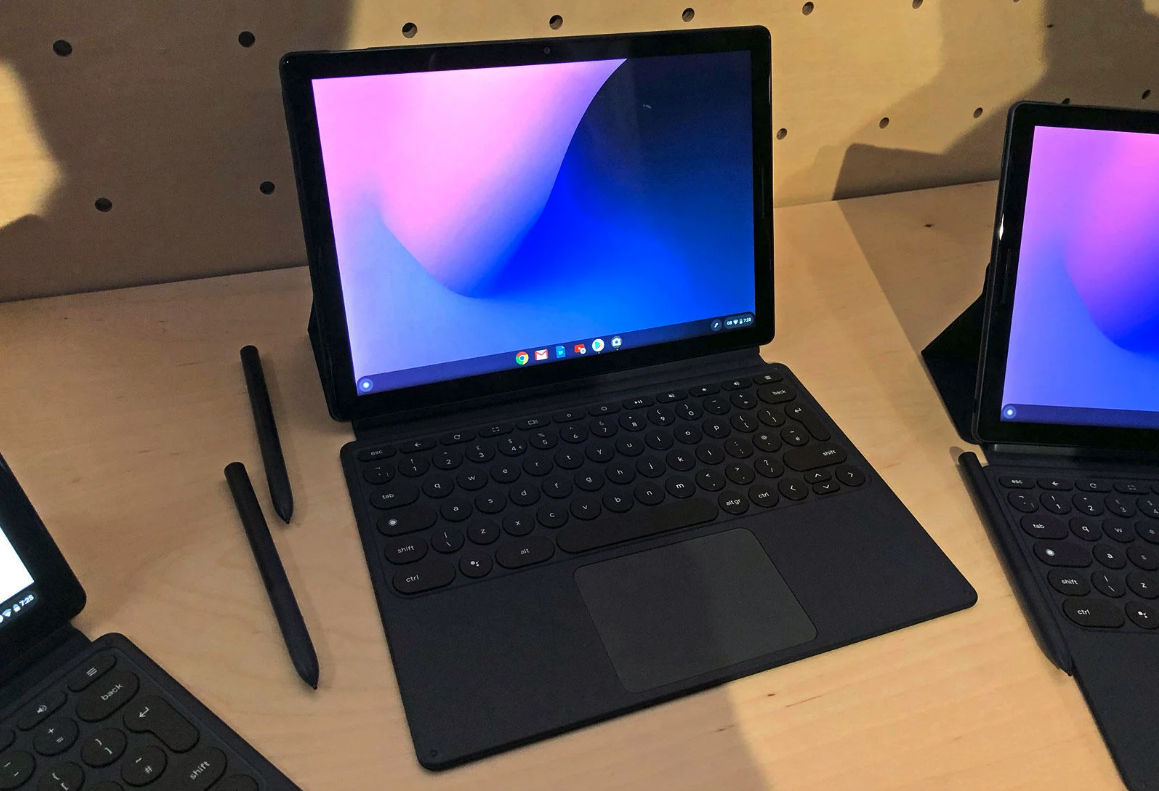 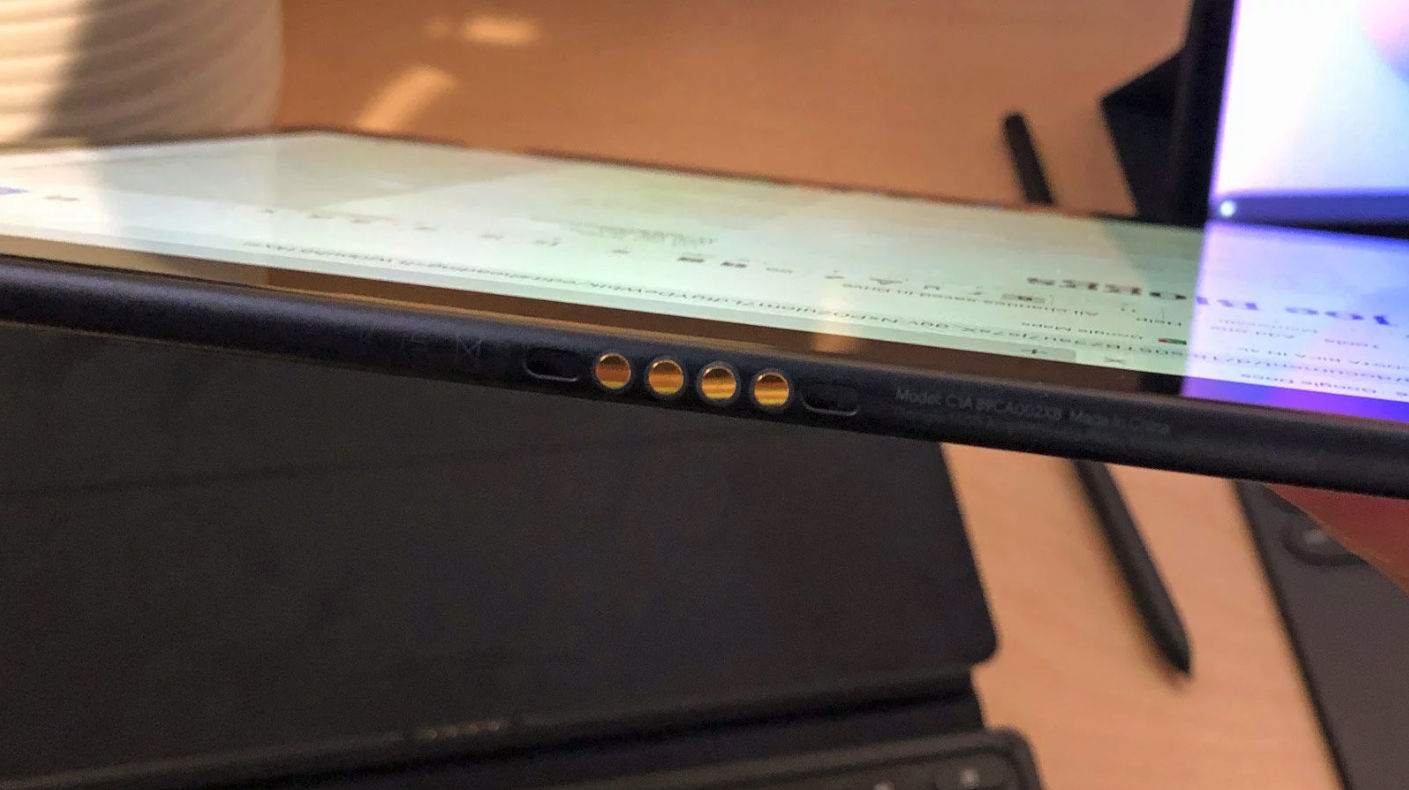 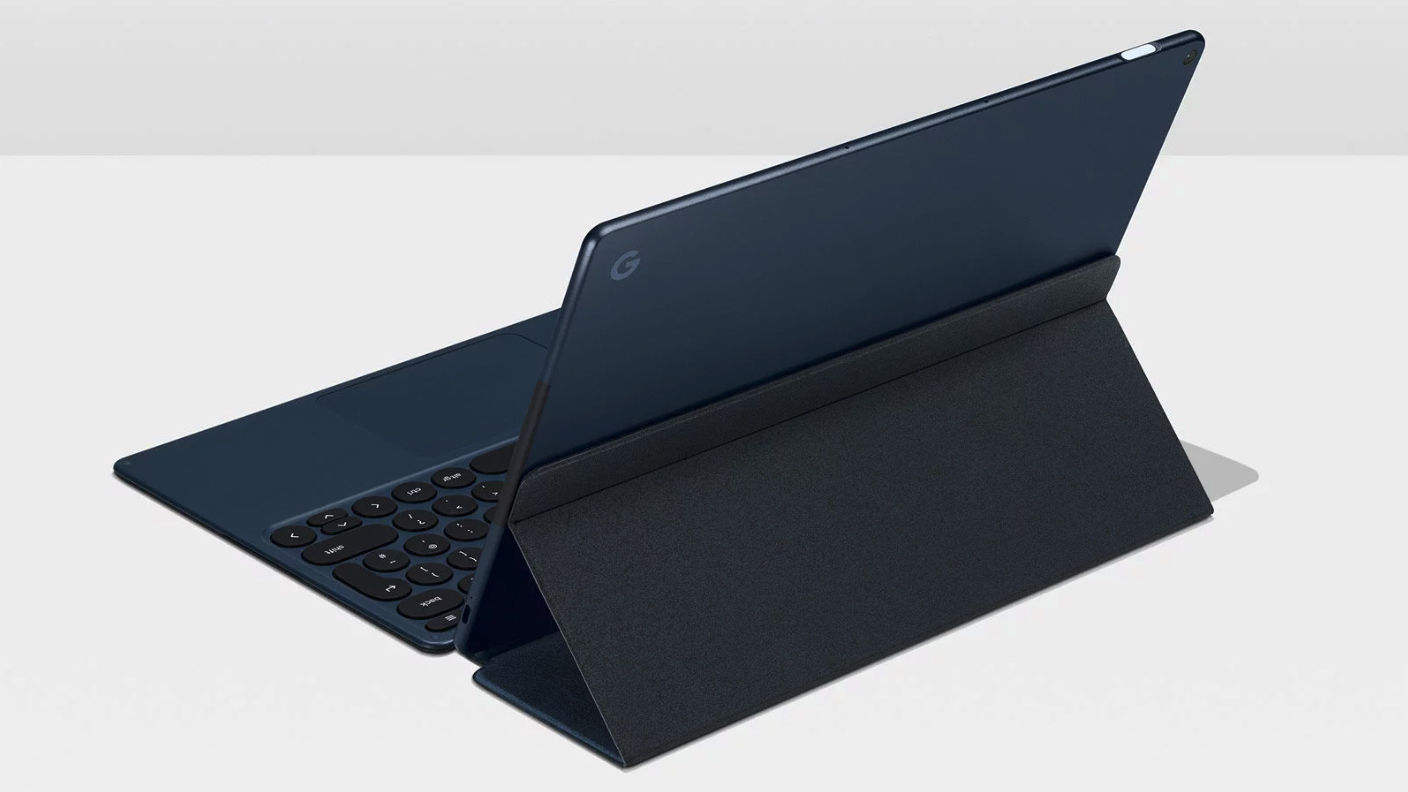 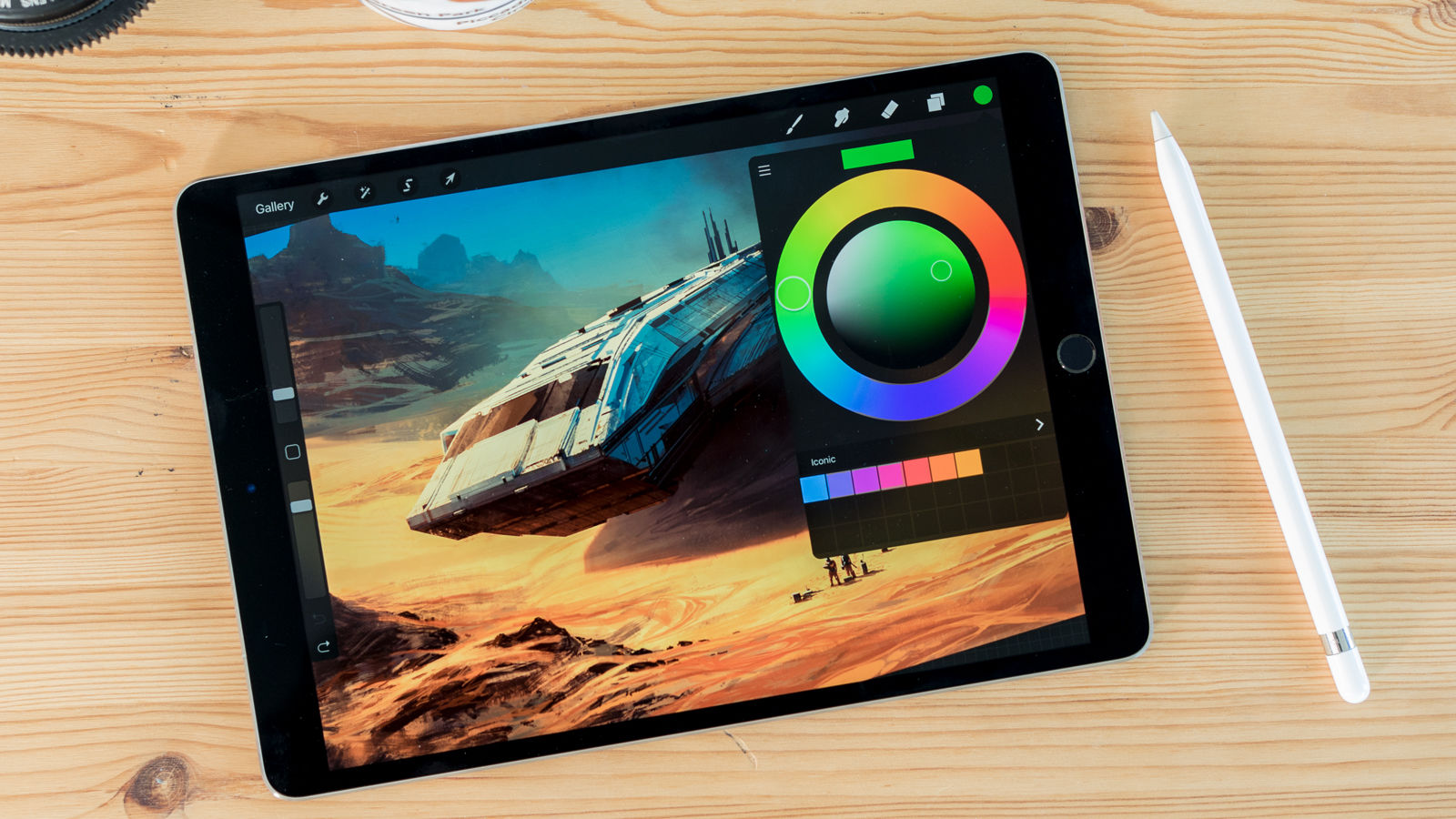 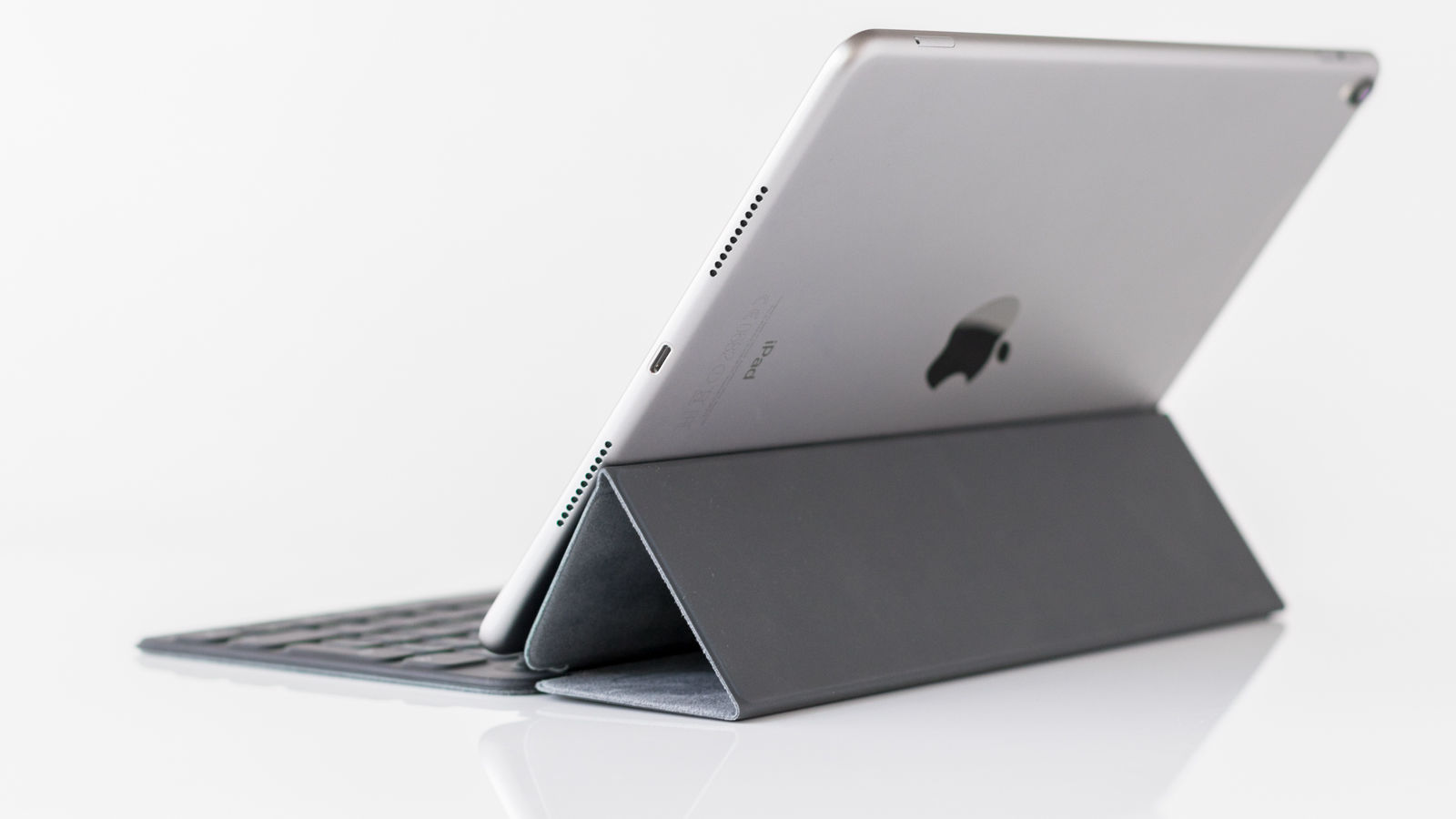 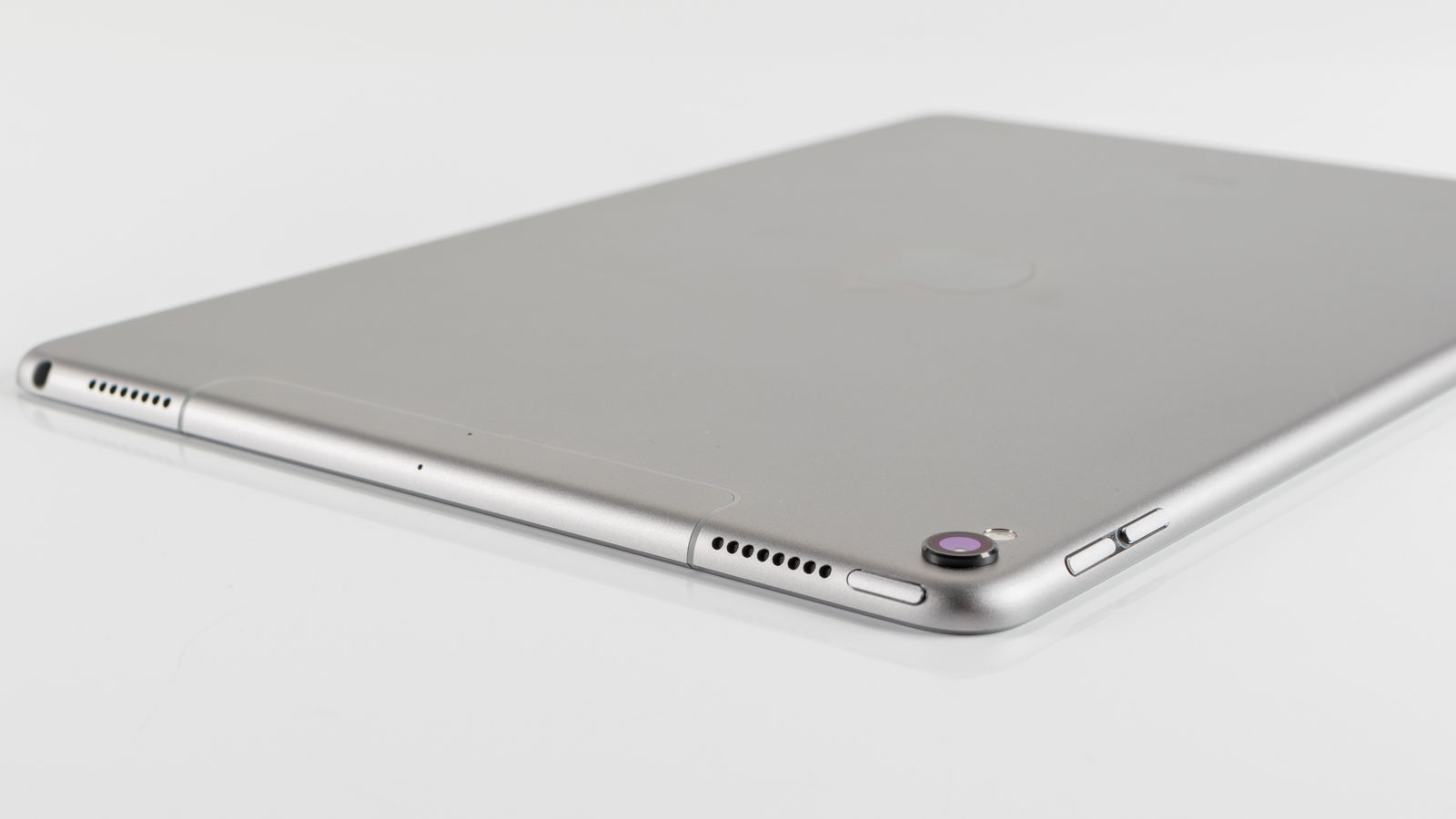 For a similar price Pixel Slate buyers will get a significantly bigger screen and a higher-capacity battery, but less storage and a less powerful rear-facing camera (the front-facing cameras are closely matched). Google’s inclusion of USB-C ports makes the Slate more versatile in many ways, whereas the iPads are somewhat locked into the ‘walled garden’ of official accessories that work with Apple’s proprietary Lightning and Smart Connector ports.

Interestingly – and despite all the mockery of Apple’s ‘courageous’ stand on the matter – the iPad has a 3.5mm headphone jack and the Pixel Slate does not. Make of that what you will. (The next iPad may follow suit.)

These are the specs for the 10.5in model, which is the closer of the two, price-wise, to the Pixel Slate. The 12.9in model obviously has a bigger screen (with a resolution of 2732 x 2048); it also has a higher-capacity battery and larger, heavier chassis.

The Pixel Slate’s USP – and the stumbling block that’s likely to put off large numbers of beginner and even moderately tech-savvy users – is its use of an operating system outside the big two (Windows and macOS) or even the big three (Windows, macOS and Linux). It’s based on Google’s own Chrome OS.

Chrome OS offers largely the same interface as the Chrome web browser, which quite a few Mac users will be used to already, but expanded to run your entire system. It’s mostly based around web applications so having a good connection is important, although you can still work offline. In this case apps can be installed from either Google’s Android Play Store or the Chrome Web Store, so there’s a wide range to choose from. 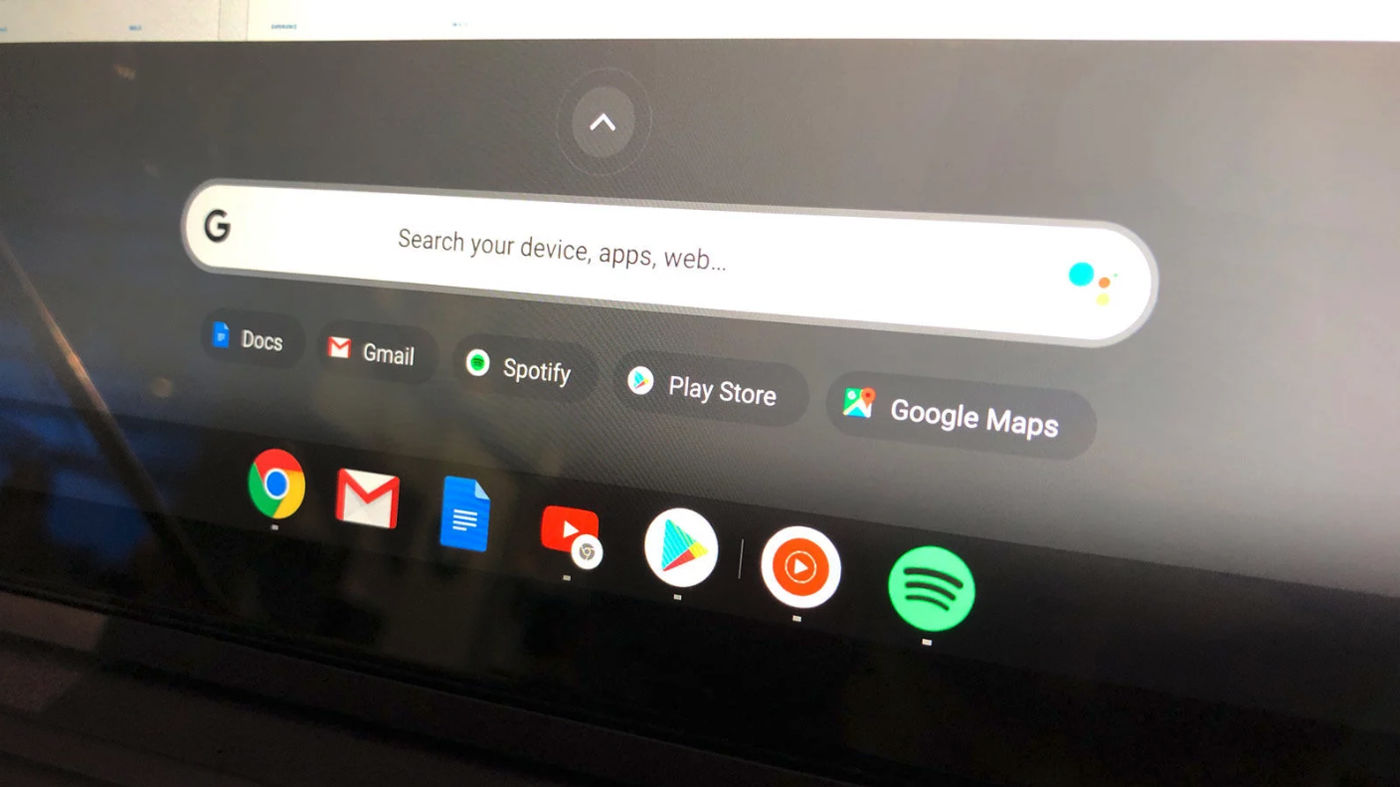 Our Pixel Slate reviewer was not entirely convinced by Chrome OS on this device, noting that many Android apps aren’t optimised for tablets and using the multitasking screen caused a degree of jitteriness.

The iPad Pro, meanwhile, runs iOS, an OS that is user-friendly, stable and secure. If you buy now it will come with iOS 12 preinstalled.

This latest version of the OS adds a raft of features called Screen Time, which help you monitor you device usage and cut back where appropriate. It also gives Photos far more sophisticated search abilities and lets you set up custom multi-step Siri shortcuts. Finally, you’ll soon be able to have FaceTime video conversations involving up to 32 people, although that feature hasn’t launched yet.