This is pretty much the perfect second-gen product. It retains all the things the first Pencil did wonderfully well (natural hand-feel, zero-lag responsiveness) while fixing the one thing it got drastically wrong: that clunky charging setup. And we like the cute new double-tap feature. It’s an expensive stylus, and the only iPads it’s compatible with are really expensive, so the 2018 Apple Pencil is likely to be beyond many budgets. But for those that can afford it, this is a high-class choice.

The original Apple Pencil was the best iPad stylus from its 2015 launch until 7 Nov 2018, when the second-gen model rolled into town. The new version is shorter, matt white and magnetically attachable, and has a single flat edge you can tap to trigger app-specific functions – but is it worth the extra money?

In this article we review the Apple Pencil (2018), explore its design, features and value for money, and offer advice about whether it’s the right stylus for you.

You can buy the Apple Pencil direct from Apple. It’s also sold by John Lewis (albeit out of stock at time of writing), AO.com and Very. 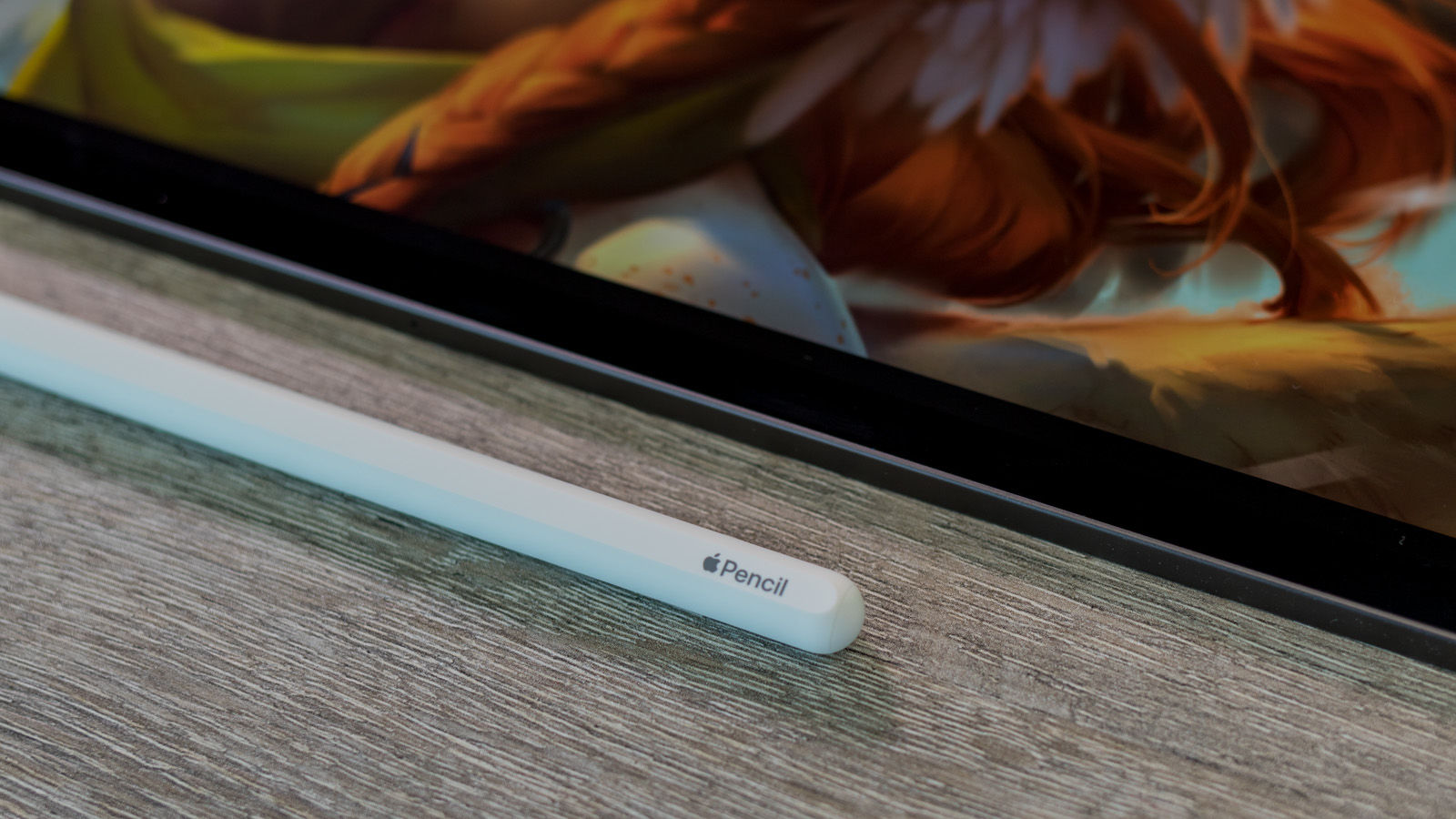 Before we get too far into the question of whether the Pencil 2 is any good, it’s important to state that your choice of Pencil will be dictated by your choice of iPad – each iPad works with only one version of the Pencil.

In other words, if you’re trying to decide which iPad you want to buy, the pros and cons of the compatible Pencil model should factor into your decision. But you can’t upgrade your stylus on a whim without also upgrading your tablet.

More details on this can be found in our article Which iPads work with which Apple Pencils?

The second-gen Pencil is a pleasingly simple-looking white stylus that’s light, well-balanced and comfortable to hold and use. (Compared to some styluses out there the balance is still comparatively far back, but we found that we liked this and quickly got used to it.) It’s relatively slender, as these things go, so fans of properly chunky styluses should look elsewhere.

Those who are familiar with the 2015 version will recognise the design, which takes the original for its template, but it’s been modified fairly extensively. It’s shorter (dropping from 175.7mm to 166mm), and whereas the first model was glossy white, this version has a matt finish. We think this feels nicer, although the ‘minimal purity’ effect is slightly less dazzling.

We’re also pleased to see the departure of the metallic ring next to the charging cap, which made the old Pencil look very slightly cigar-like. 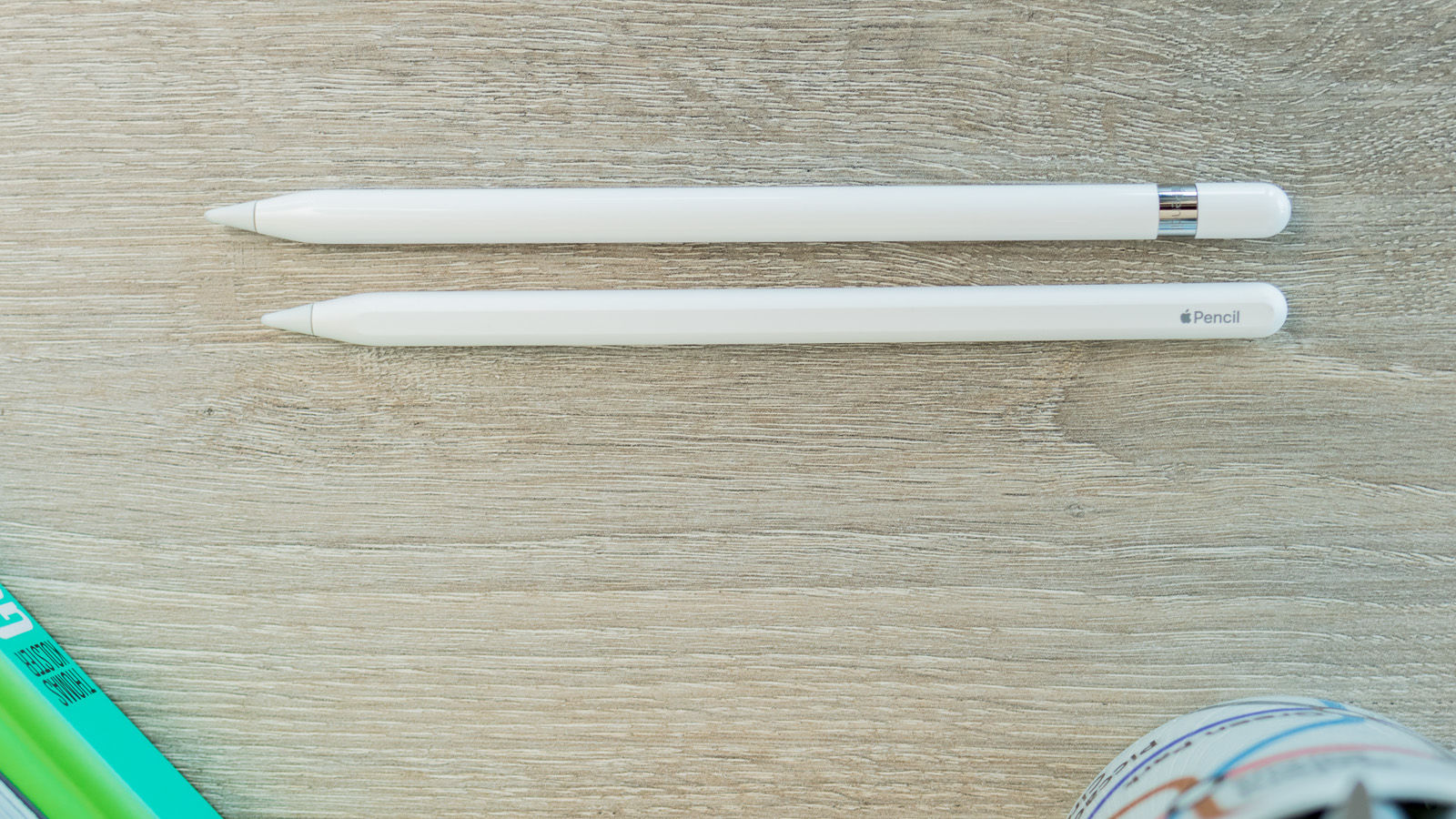 Like a chef interrupted while peeling a carrot, Apple has sliced a single flat edge off the previously cylindrical Pencil’s body. Again, one can imagine Jony Ive spluttering over his minimalist cornflakes at this change, but it’s a practical one: it means the stylus is easier to hold, and less prone to rolling off your desk when you put it down.

Aside from this, the flat edge has a new function which we’ll discuss in the features section, and can be laser-engraved with the band name or political slogan of your choice. 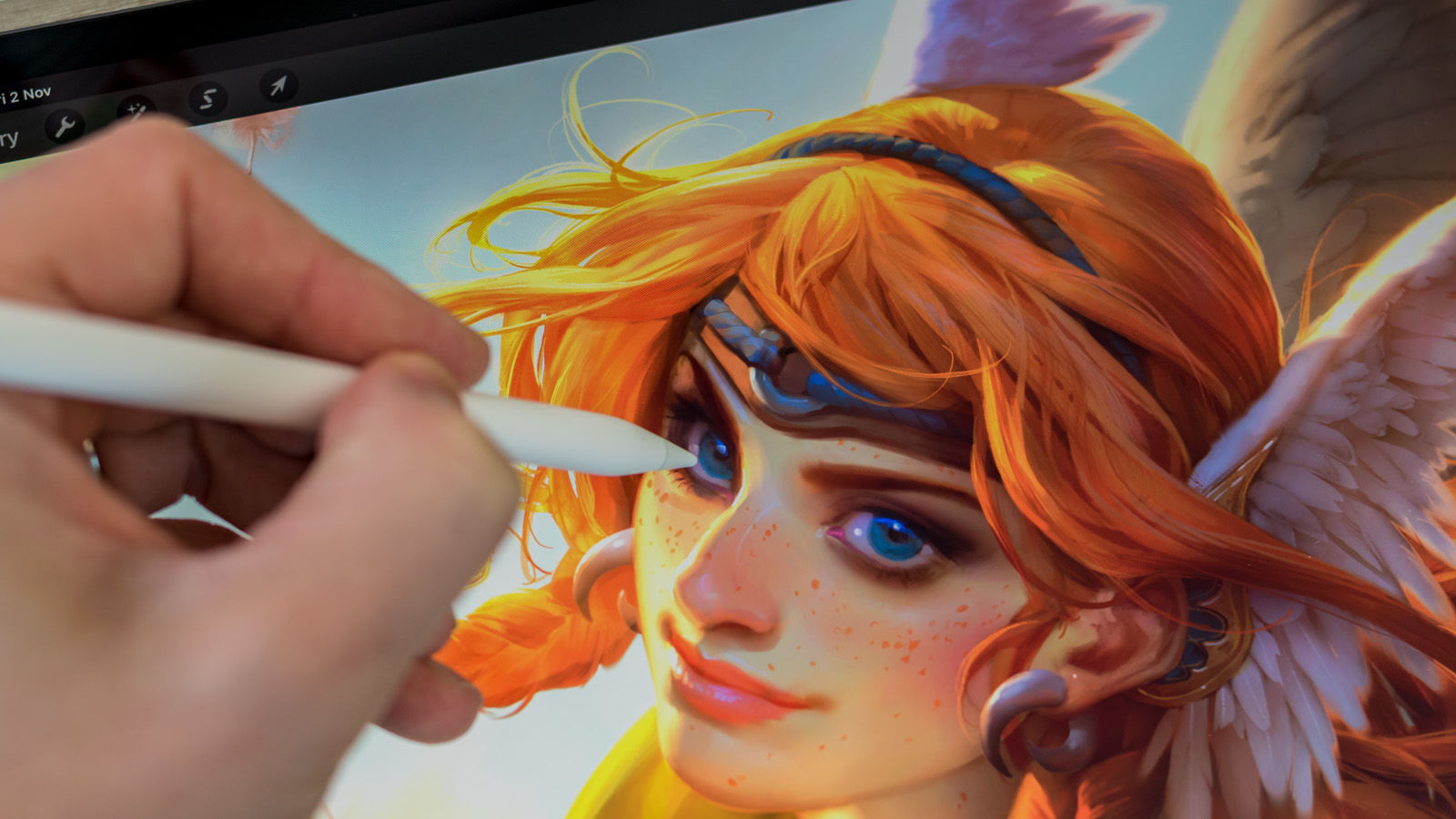 The most important physical change concerns the much-maligned Lightning connector on the back end of the old model. This was used for charging, and was concealed under a (magnetically attached) cap when not in use, but this was by no means a perfect solution. When charging, the stylus jutted out of the iPad’s Lightning socket at an awkward and seemingly vulnerable angle, and the cap was sometimes lost; when not charging, which was most of the time, it gradually drained of battery.

The new Pencil has no Lightning connector at all, and consequently no cap to lose. It attaches magnetically (via its flat edge) to the righthand edge of a 2018 iPad Pro, and as soon as you do this it offers to pair, or simply starts charging wirelessly, as appropriate. We imagine a lot of users will keep their Pencil semi-permanently attached to their iPad Pro when not in use, as we do, which means it will always have battery power when called upon. 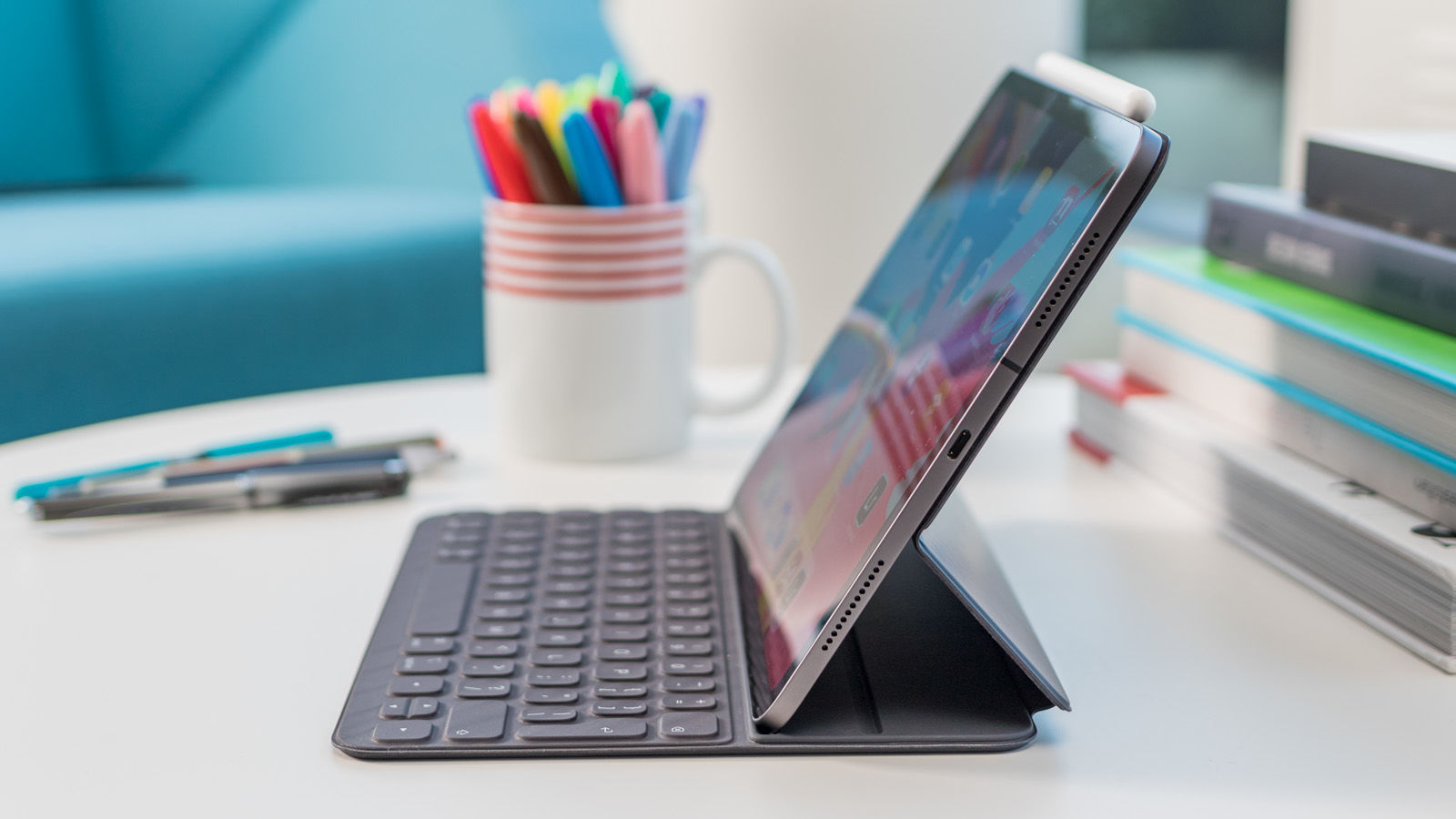 This is so vastly and obviously better a system that we are, if possible, even more frustrated by the original design than before. Why did it take Apple three years to realise the Lightning charging setup was bad? But yes, this is a welcome improvement and we are glad of it.

Ease of use & Stylus features

The Apple Pencil’s greatest attribute is its smoothness and responsiveness in use, and that is as true for the 2018 as for the 2015 model. Indeed we weren’t able to discern any difference between the two in this respect – but that’s hardly a criticism.

Vitally for digital artists, the stylus is pressure-sensitive, and you can tilt to create different textures or shapes of mark (depending on the app). It’s an effective and accurate tool for handwriting, sketching, note-taking and illustration.

Don’t discount the importance in this of the obvious physical similarities between the stylus and the graphite-based writing implement from which it takes its name. Our innate familiarity with pencils make the device feel immediately and beautifully natural, and the lack of lag completes the illusion that you’re scribbling on the iPad like a notepad. 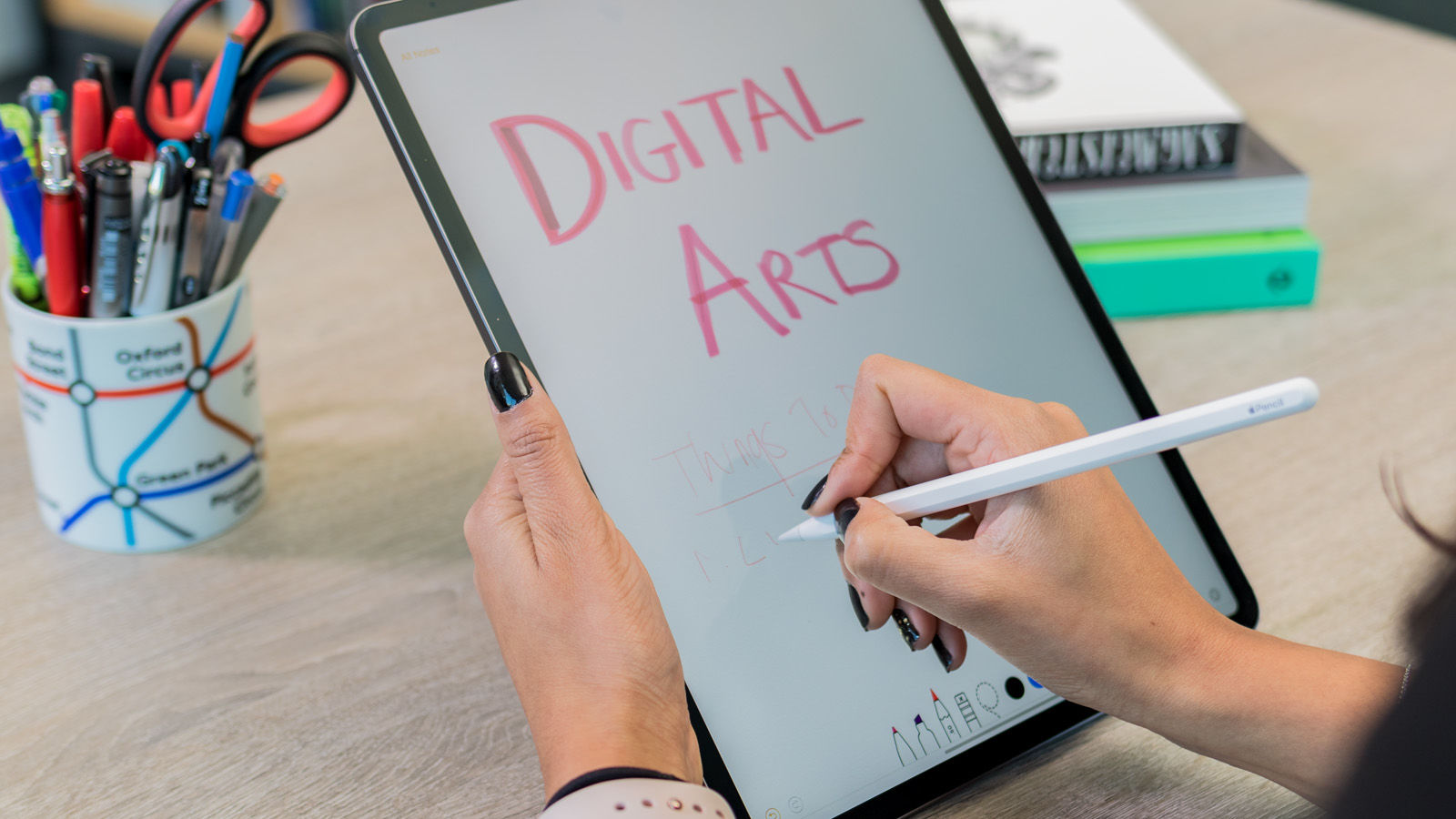 Your instinct may be (as shown above) to hold the Pencil with your thumb on the flat edge, and this works fine in most contexts. But if you can resist this and keep your index finger on the edge instead, you’ll be able to use the new double-tap feature, which triggers an app-specific function.

In Apple’s own apps, double-tapping will by default switch between the currently selected tool (such as pen in Notes) and the eraser, which is convenient for quick scribbles and sketches that need to be amended on the fly. But go to Settings > Apple Pencil in the linked iPad and you can choose from two other functions, or turn it off entirely.

And this is just the beginning, because (as with many hardware functions) the real power will be unlocked via third-party customisation options. Any app can in theory add whatever function it likes to double-tap. Our colleagues on Digital Arts, for example, have tested a prototype build of Procreate that uses double-tapping to open a radial menu (shown below). 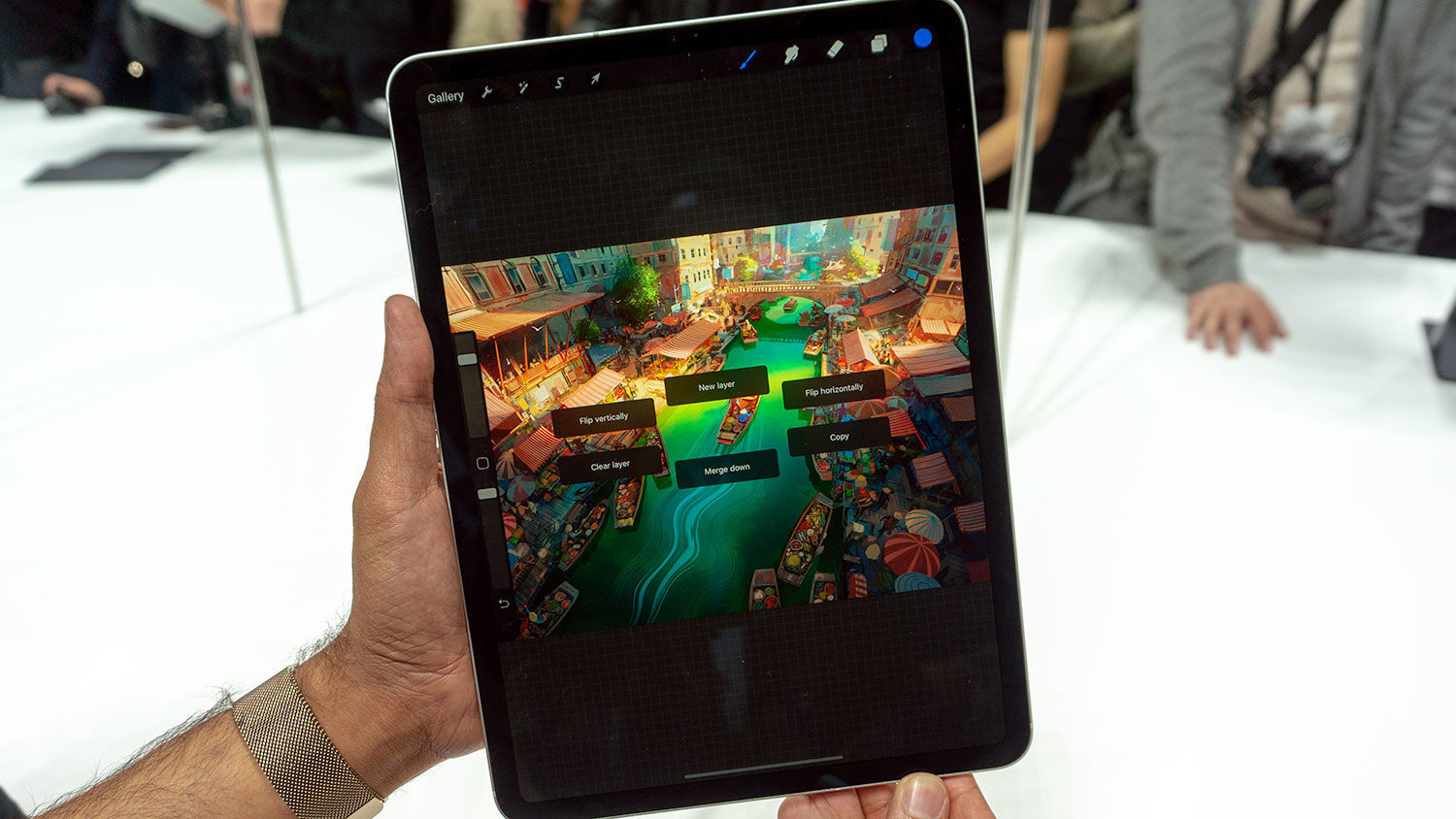 As ever with Apple hardware inputs, we look forward to seeing what third parties come up with. Note that customising these controls will happen in the apps themselves, rather than in the Settings section mentioned above.

The company has such weight in this market that you can expect plenty of support for double-tapping, but it’s hard to judge how significant this feature will prove to be until the industry has time to respond. 3D Touch and the MacBook’s Touch Bar, for instance, have been given lots of attention but neither has proved to be a game-changer, although the greater simplicity of double-tapping makes us more optimistic for this feature.

Like the Apple Watch Series 2, this is pretty much the perfect second-gen product. It retains all the things the first Pencil did wonderfully well – natural hand-feel, zero-lag responsiveness – while fixing the one thing it got drastically wrong – that clunky Lightning charging setup, now replaced by a zero-hassle magnetic wireless arrangement.

As a bonus, it adds a cute new double-tap feature. At present we like being able to switch easily between functions (most obviously pen and eraser) in a few of Apple’s own apps, but it could evolve into a real game-changer if the software developers play ball… and they usually do when Apple is doing the asking.

This is an expensive stylus, and the only iPads it’s compatible with are really expensive, so the 2018 Apple Pencil is likely to be beyond many budgets. But for those that can afford it, this is a high-class choice.