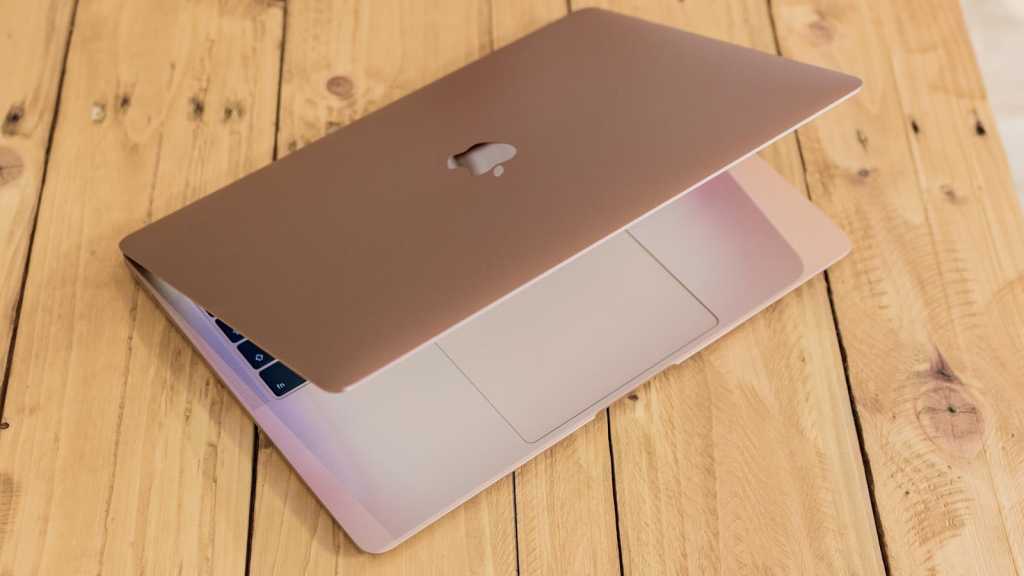 Beyond the obvious Mac vs Windows debate, these two laptops are very closely matched in many ways. If the software doesn’t swing it for you then its a choice of quite difference designs. Then a range of specs where the newer Dell is able to offer a more powerful array that’s more comparable to the MacBook Pro. At it’s entry-level, the XPS might be cheaper but it’s only Core i3 with 4GB of RAM.

The long awaited MacBook Air refresh arrived last year (even though we thought the line might be discontinued), but how does Apple’s lightweight laptop compare with one of the best Windows devices around? Here we compare it with the new Dell XPS 13 for 2019.

Since Dell has added a new Core i3 model to the XPS 13 this year, it’s the cheaper option here. We’re only looking at the 2018 MacBook Air, not the older model.

You can buy the MacBook Air from Apple.

These two laptops are very similar in some ways, yet very different in other aspects of design and build.

It’s mainly that the MacBook Air uses an aluminium shell while Dell uses a combination of materials including fibreglass. There are various colours on offer and they’re both premium so it really depends what you prefer.

Dell has managed to get the webcam back into the bezel above the screen, which matches the MacBook Air. Both laptops have small bezels around the display but the XPS 13’s are a little smaller. 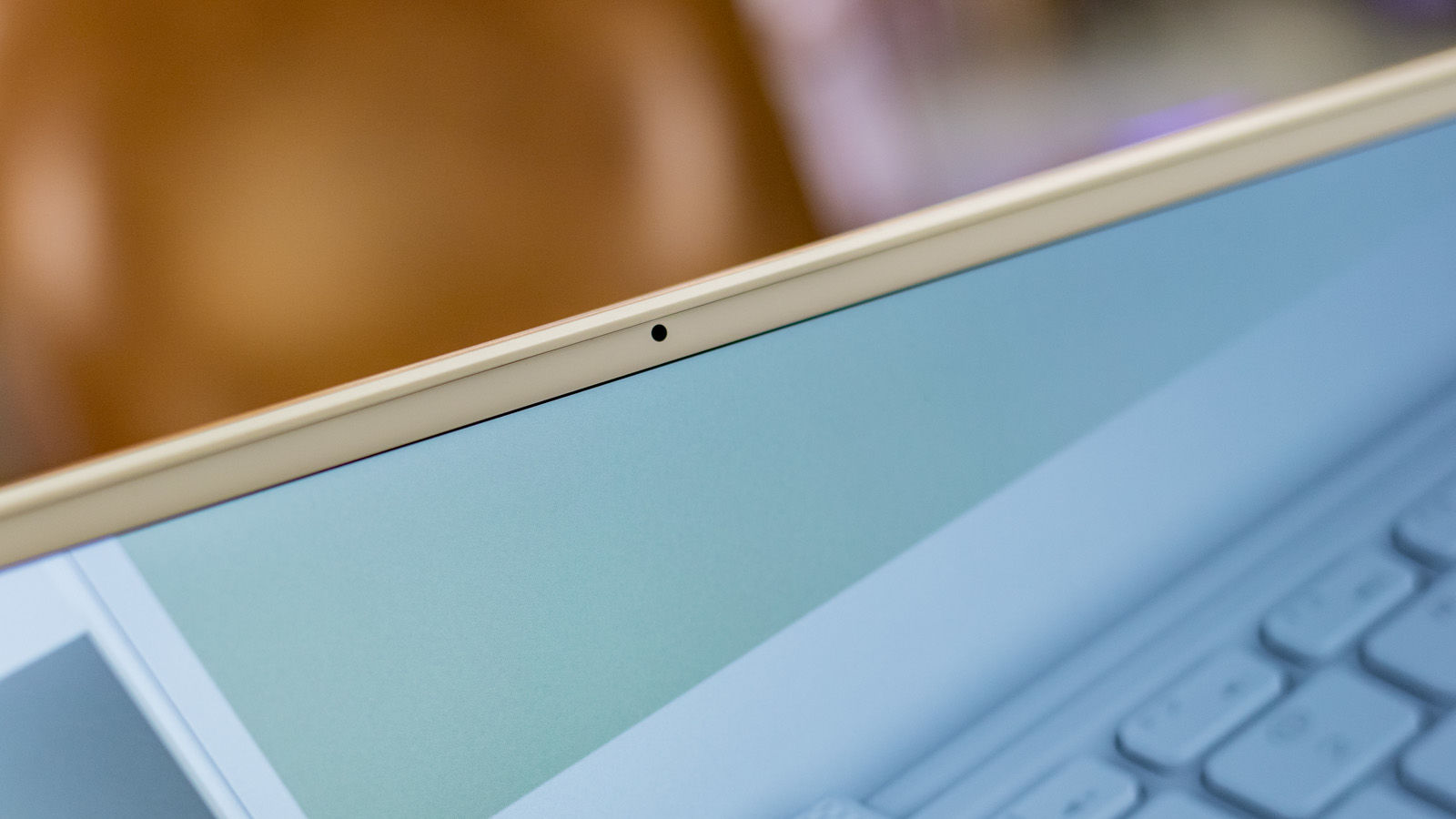 There’s a wedge shaped design on both laptops and it’s a bit of swings and roundabouts as although the MacBook Air is thinner at the small end – 4.1 vs 7.8mm –  it’s thicker at the other end at 15.6 vs 11.6mm.

The pair are close in weight with the Air at 1.25kg, but the XPS marginally lighter at 1.23kg. Not a difference you will notice.

Although the XPS 13 has a variable torque hinge which makes it easy to open, then gradually stiffer the more you open the laptop, we found it needs two hands to operate before it’s half open. It does hold the screen nicely for touch use though.

Look at the laptops and you’ll notice different ports, but we’ll tackle those in the specs section below. 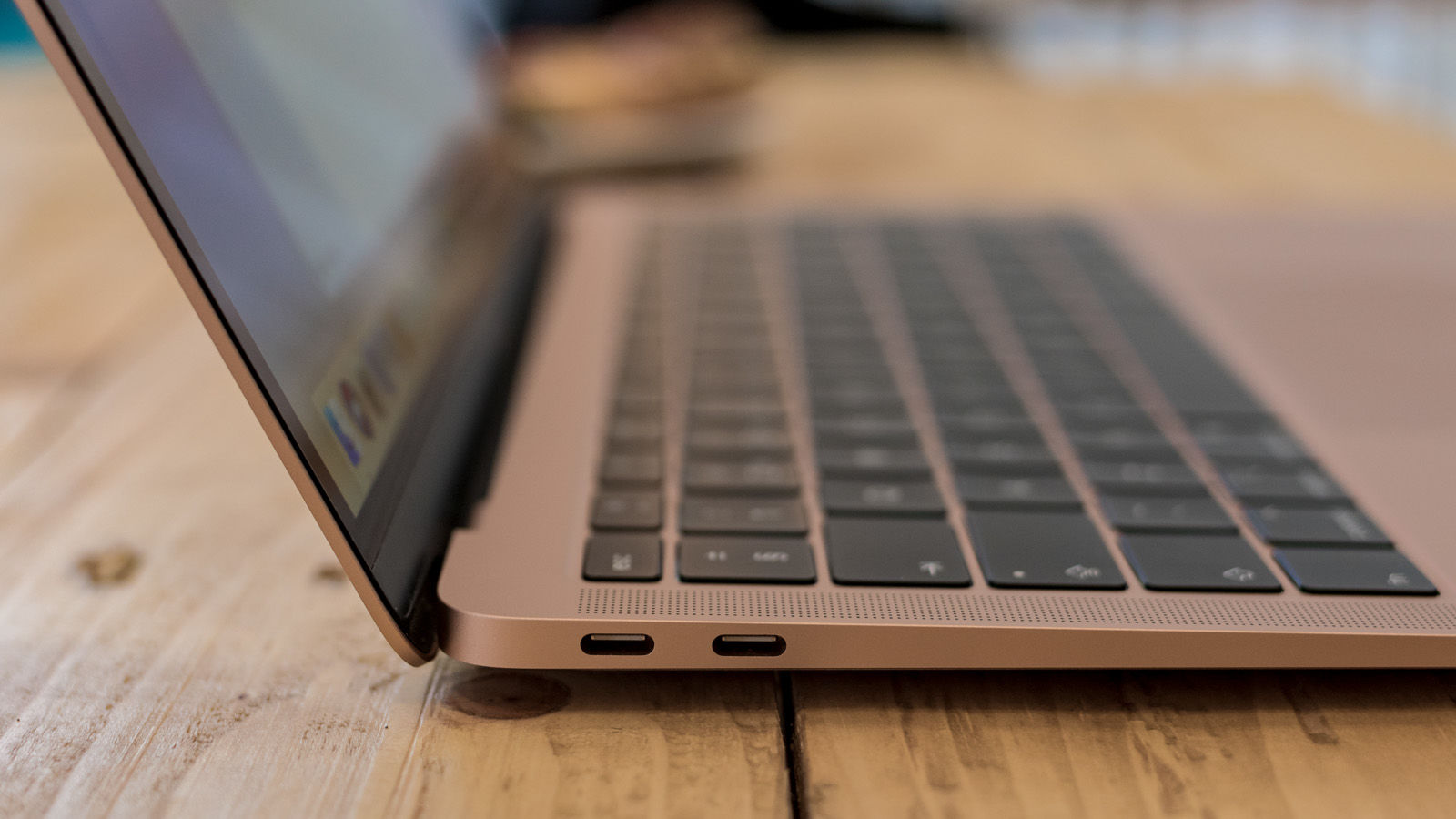 Before we delve into the GBs and MHz, there’s a huge difference in these two laptops on the software side. You’re getting macOS or Windows 10 which might well be the biggest decision to make. We’re not going to get into the debate now but you can read about it here.

Onto the actual hardware and we’ll start with the screen which is 13.3in either way, which is still the sweetspot for a portable laptop. 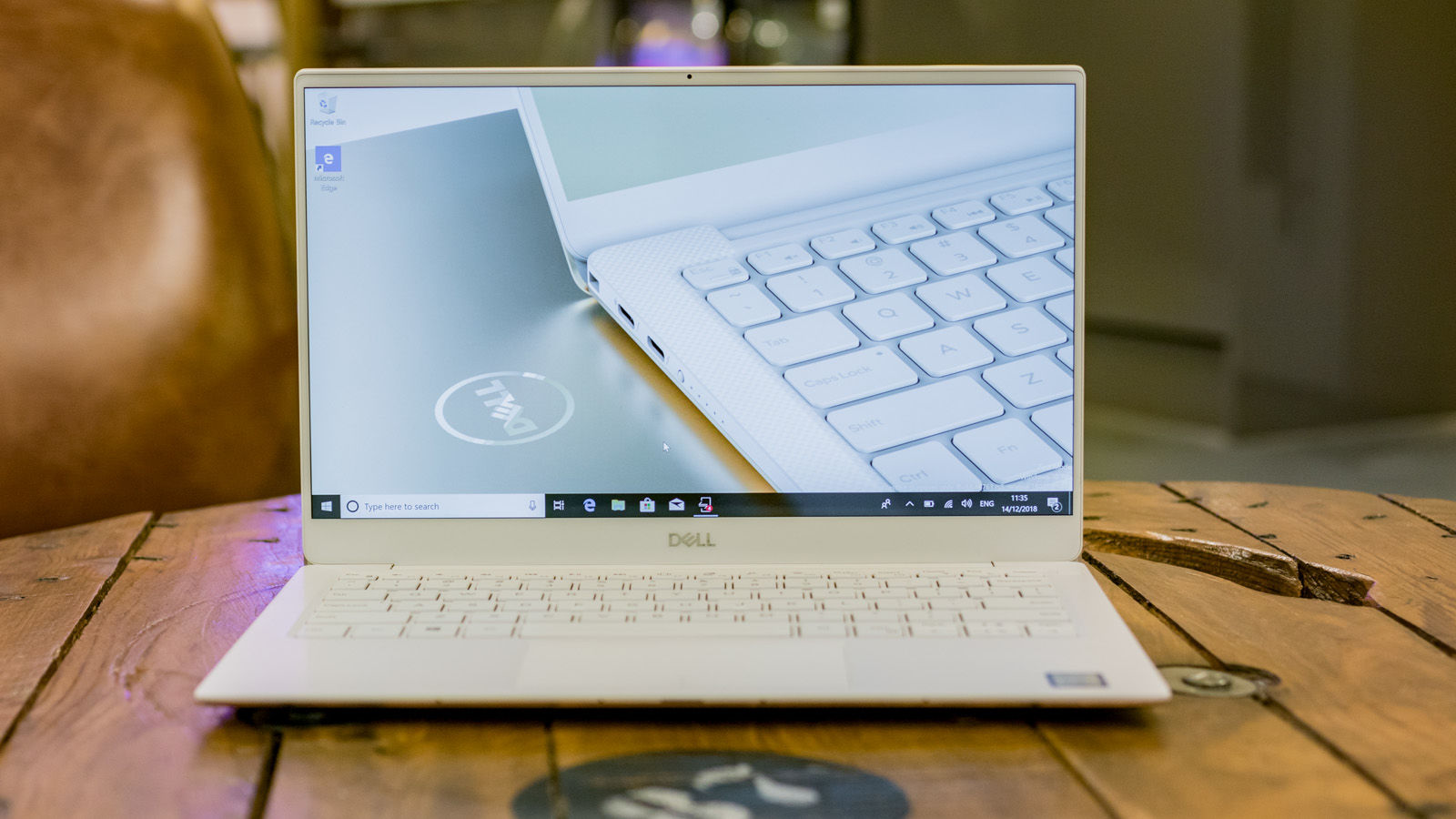 One key difference with the screen is that Dell offers it in a touch option, something that seems like Apple is unlikely to ever offer.

In the engine room on the Apple side of the fence is a Core i5 (the 8210Y) which is dual-core and 1.6GHz (up to 3.5GHz Turbo Boost). This is non-configurable so you’ll have to be happy with it.

Dell offers a wider range of chips, this year starting with a Core i3 that’s also dual-core. Jump to the Core i5 or i7 though, and they are quad-core processors so there’s more power on offer there.

Things are similar when it comes to memory and storage with both offering up to 16GB of RAM, although the Dell starts at 4GB while Apple offers at least 8GB. Both start with 128GB of SSD storage but the XPS 13 goes a little higher at the top end with 2TB vs 1.5TB. 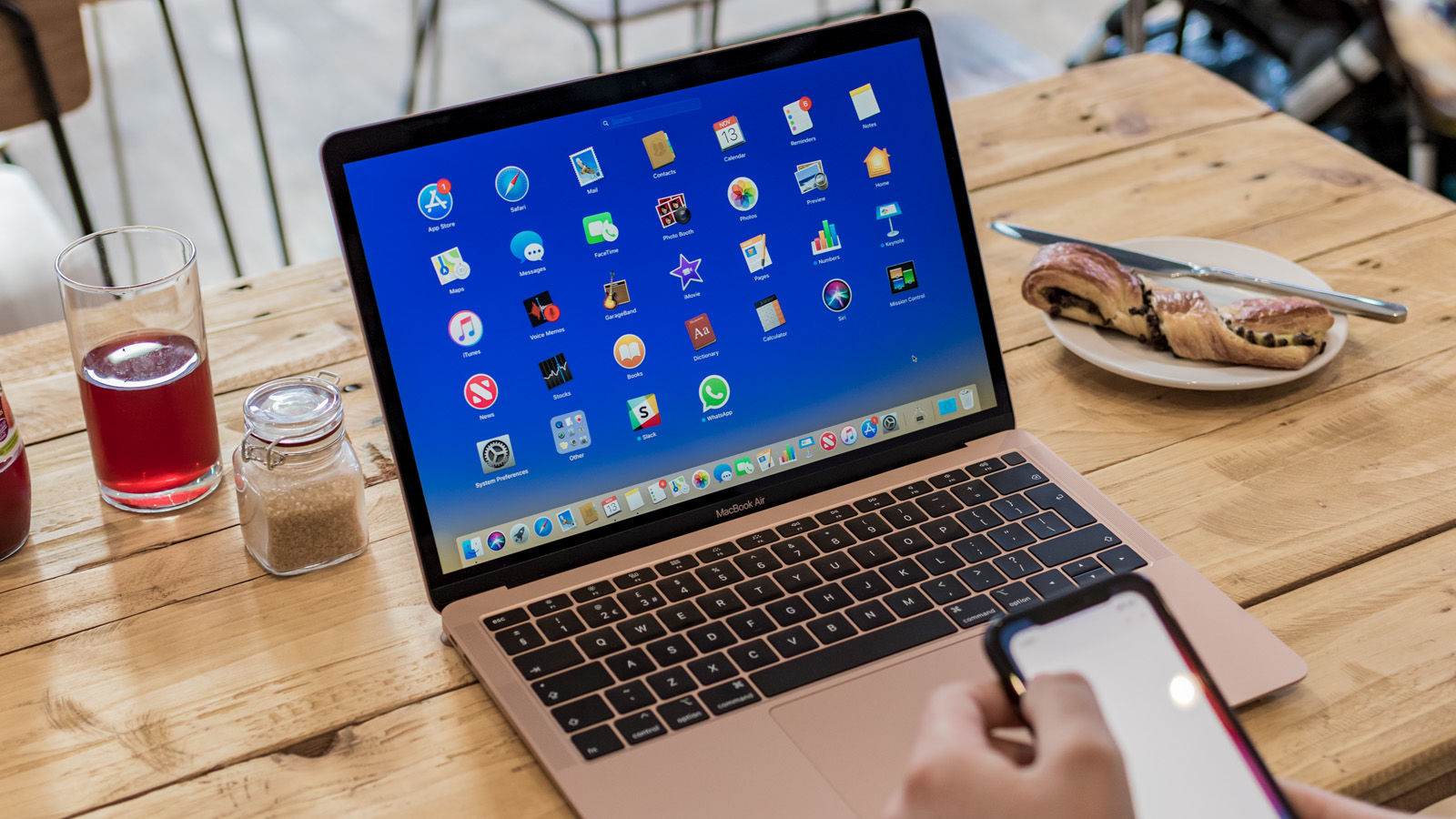 Battery life is important for a laptop, and the MacBook Air offers 13 hours. Dell is quoting more than last year’s model with up to 21 if you get the Full HD model.

Really the last thing to talk about is the ports on offer and it’s now pretty familiar for laptops to lose ones like the classic full-size USB-A. The MacBook Air just has two Thunderbolt 3 (USB-C) ports which support charging and DisplayPort. There’s also a headphone jack on the other side.

The XPS 13 also has the same ports, plus an extra USB-C port and microSD card reader which could come in handy. Both have a fingerprint scanner and a 720p webcam.

Here’s a table comparing all the specs:

The big deal here is obviously choosing macOS or Windows and it goes without saying which one we prefer at Macworld.

When it comes to the other elements, there’s very little separating these two excellent laptops. Some things are pretty minor and down to your personal taste.

Other things are objectively better or worse but it’s swings and roundabouts with pros and cons for each. At the highest spec, the XPS 13 has a little more to offer with an optional i7 and 2TB of storage which is more a competitor with the MacBook Pro.

At it’s lowest end, the XPS is Core i3 with 4GB RAM where the Air is Core i5 comes with at least 8GB of RAM (for a little more money).