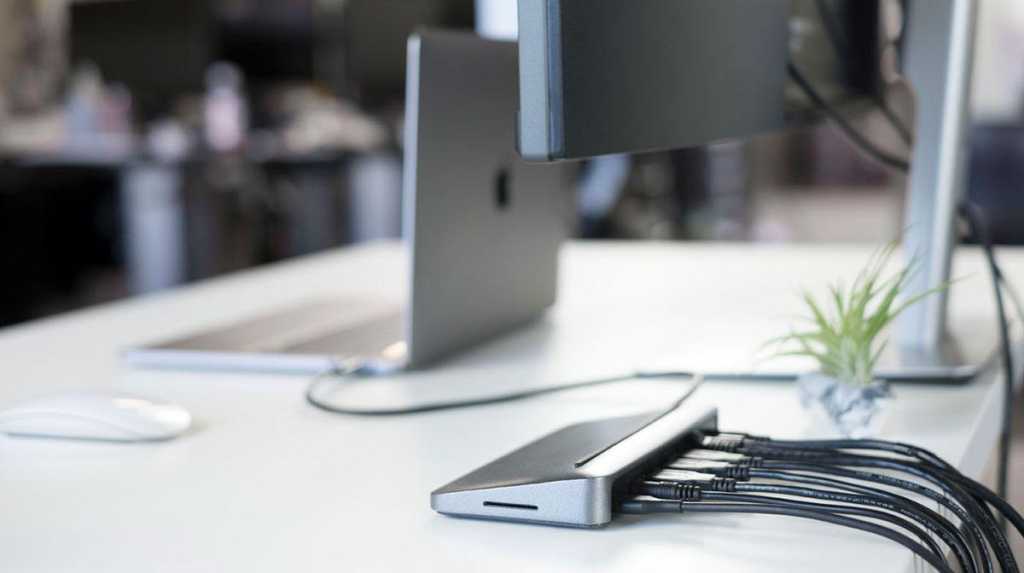 With the Henge Stone you can connect multiple devices, plus Ethernet connection and displays, in one great-looking docking station. A companion Vertical Dock, also from Henge, makes the Stone an (almost) complete solution for today’s MacBook user.

The Stone docking station from Henge Docks (I’m guessing the name’s an ironic nod to England’s neolithic monument Stonehenge) is a slim tethered dock that looks as gorgeous as the MacBooks that it is built to extend.

Plug in all your devices (screen, keyboard, mouse, printer, hard drives, etc) into the dock and then connect it to your MacBook, MacBook Air or MacBook Pro. It’s (almost) that simple. See our roundup of the best MacBook docking stations.

Importantly, its 135W power supply provides the full 87W charging required by a 15in MacBook Pro, so one connection will link your laptop to the external devices and power whatever USB-C MacBook you use.

An apparent glaring omission on the Stone dock is an HDMI port, which is one of the main slots many need for their new laptops, but Stone isn’t alone in omitting HDMI – and all is explained below.

There is reason to Henge’s (and other dock makers’) decision to omit HDMI. There are many adapter options to go from DisplayPort or Mini DisplayPort to HDMI, but going from HDMI to DisplayPort is a more costly proposition. And most purchasers of the new MacBook Pro models are upgrading from older Macs that featured Mini DisplayPorts for video output. Those customers are facing the issue of adapting their existing setups to the new MacBook.

Henge decided that, regardless of the standard it chose, a large portion of users would be forced to use an adapter anyway, and so it chose the connection that most of those people already had.

If you don’t require two displays and the one you do have will run from DisplayPort, then the Stone Dock will work just fine. However, if your display uses HDMI, then you’ll need either a “DisplayPort to HDMI” or “USB-C to HDMI adapter”.

Can you run two monitors off of a single USB-C connection to a USB-C docking station such as Stone? Sadly, Macs currently support running only a single external display over each USB-C connection.

So two displays means two USB-C connections to the laptop: one dock, one USB-C to HDMI or DisplayPort adapter. This is not the case with docks that boast 40Gbps Thunderbolt 3 ports, such as the CalDigit TS3 Plus. Thunderbolt 3, while identical in looks to USB-C, has enough power to run two displays in Extended mode using just one cable connection to the laptop. The Stone dock uses slower 10Gbps USB-C 3.1.

To get dual-display support from a single connection, a Thunderbolt 3 dock or specialised adapter would be needed. But Thunderbolt 3 has much higher price points due to the complexity, certification costs, and power requirements of devices in that category.

Even the CalDigit Thunderbolt Station 3 Plus (TS3 Plus) that costs £265/$309 requires an adapter for two displays from a MacBook Pro.

Sorry, but getting two screens to run from a MacBook Pro using a USB-C docking station will require at least one extra adapter.

Henge sells a “USB-C to 4K HDMI” adapter for €30/$30; to add a second external display to your MacBook if the first uses the dock’s DisplayPort.

For my dual-screen (HDMI) setup I had to add a “DisplayPort-to-HDMI” from the dock and a “USB-C-to-HDMI” adapter (from the MacBook Pro), which rather removes the benefits of an integrated do-it-all dock – but the problem is with Apple rather than the dock manufacturers.

That said, once you’ve setup the dock with the dongles, it’s a simple enough matter to detach and re-attach the laptop when you wish – and even easier if you pair the Stone with Henge’s Vertical Dock (more on which later in this review).

Stone measures 8.2cm x 17cm x 2.35cm (3.22in x 6.7in x 0.93in), and therefore is much more svelte than the Targus Dock410 USB-C dock – although that docking station does include HDMI built in. When I tried using the Targus dock, however, it didn’t manage to power the MacBook Pro as the Henge Stone does – so Stone beats Targus.

Two docks are better than one

When you want to take your laptop away from the desk, you simply lift it out – without having to disconnect and then reconnect cables.

Of course, while docked you can’t use the Touchbar on the MacBook Pro. We’ll need to wait for Apple to release a keyboard with Touchbar for that luxury.

The Vertical Dock features intake and exhaust vents that move additional air to and from the MacBook’s cooling system.

The Henge Vertical Dock can be bought direct from Henge Docks. We’ve also seen it available from Amazon.com, but make sure you choose the correct version that works with your model of MacBook.

The non-MBP Touchbar Vertical Dock options don’t appear to be available outside the US.

Although our configuration of two HDMI displays meant we had to add adapters to the dock, the slim-profile Henge Stone docking station ably did its job and certainly looks the part in Apple-like Space Gray metal.

It has enough oomph to charge even the 15in MacBook Pro at full 87W, so you can connect just one cable to your laptop for charging and running an extra display, plus wired Internet and four external USB devices (three of them the older USB-A standard).

Twinned with the Henge Vertical Dock, it’s a great way to connect multiple devices without having to connect and disconnect when you take your MacBook away with you.