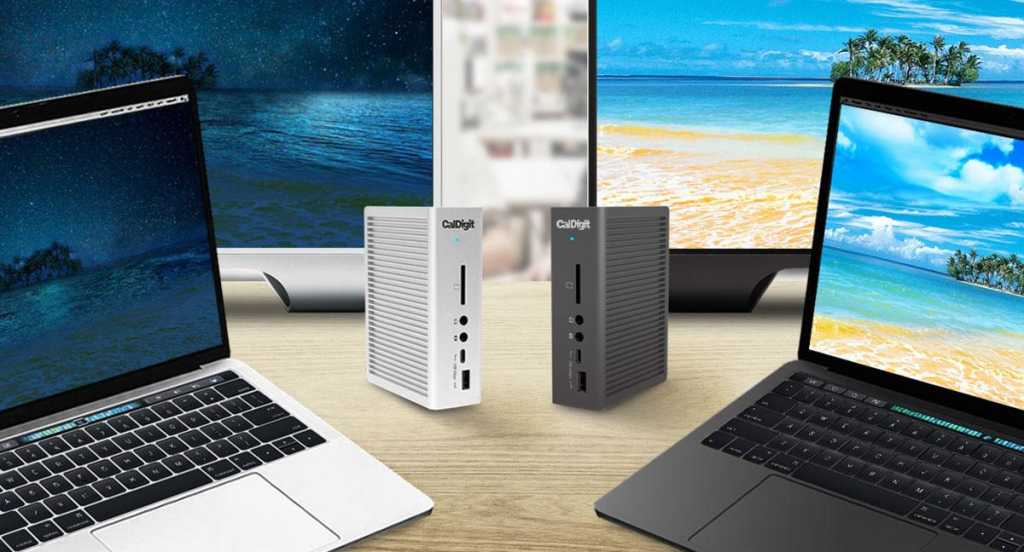 More powerful than a simple USB-C dock, the CalDigit TS3 Plus features the superior (but otherwise physically indistinguishable) 40Gbps Thunderbolt 3 connectors that can run two external displays in Extended mode (via one cable to the laptop) and charge at 87W so makes a great companion to Apple’s 15in MacBook Pro.

The CalDigit Thunderbolt Station 3 Plus (TS3 Plus) is a long name for a small box, but it’s a tethered laptop docking station that boasts a lot of ports and connections.

This is the most ports we’ve seen on a comparable USB-C or Thunderbolt 3 dock. What no HDMI? See later for CalDigit’s reasoning for DisplayPort over HDMI.

It can charge at up to 87W so is perfect for Apple’s 15in MacBook Pro, and ranks as our #1 best Thunderbolt 3 docking station for the MacBook Pro – creating an easy dock that you can connect your laptop to and from in seconds, and have a fully functioning desktop-like setup ready for action as soon as you arrive back at base. Indeed, why not buy two? One for home and one for the office.

(Caldigit updated the dock’s firmware to take it from 85W to 87W, as well as improve support for USB-C monitors.)

Thunderbolt 3 docks might seem a little old hat now that Thunderbolt 4 is the new connectivity standard on all Macs and premium PCs, but Mac users won’t notice much of a difference as its iteration of Thunderbolt 3 includes most of the benefits found in Thunderbolt 4, which is much more of an upgrade for Windows PCs.

It is more affordable than the newer Caldigit TS4 dock that includes Thunderbolt 4.

MacBook Pro owners will be pleased that the TS3 Plus is available in either Silver or Space Gray.

What’s the difference between USB-C and Thunderbolt 3?

A quick note on Thunderbolt 3 and USB-C. Because they look the same, it’s easy to forget that there is a difference. The two are interchangeable but Thunderbolt 3 has 40Gbps bandwidth and USB-C has 10Gbps. This becomes important when you want to connect a dual display to your MacBook Pro.

There are, however, newer docks on the market that work with both T3 at full 40Gbps speed and USB-C at 5Gbps. These docks, such as the USB-C Pro Dock from the maker of the TS3 Plus, use the Titan Ridge chipset.

What’s the difference between Thunderbolt 3 and 4?

Anyone with a newer MacBook, with Thunderbolt 4 ports, should consider a Thunderbolt 4 (TB4) docking station rather than Thunderbolt 3 (TB3), but, as TB4 is backwards compatible with TB3 and USB-C, older docks such as the Caldigit TS3 Plus will work with newer MacBooks as well as TB3 models.

Thunderbolt 4 does have technical benefits, such as smarter daisy chaining of devices and faster storage tech. Read our feature on Thunderbolt 3 vs Thunderbolt 4 vs USB-C.

Connecting dual displays to a MacBook

The TS3 Plus, for example, does require an adapter to connect a second monitor because it only has one video port (DisplayPort) built-in.

To connect the second monitor, you need to connect a USB-C Video Adapter to the spare Thunderbolt 3 port on the TS3 Plus.

Apple throws in a further complication, which is not the fault of dock manufacturers. Slower USB-C docks on Mac are capable of creating only dual “Mirrored” displays rather than the more useful “Extended” displays where two monitors combine to create a much larger screen.

This is because the macOS doesn’t feature MST (Multi Stream Transport), which means dual extended displays are not possible via USB-C on Mac, only Windows.

However, Thunderbolt 3 docks can work with dual extended displays because they are using the newer, faster technology.

We did get two (extended) displays to run off the USB-C Stone dock (by Henge Docks), but it required a second adapter plugged into the laptop. The CalDigit TS3 Plus required adapters to the dock (for HDMI) but needed just the single Thunderbolt 3 connection to the laptop. But you must use the Thunderbolt 3 cable, not a USB-C one even though they look identical.

Here is a video about connecting two monitors to the TS3 Plus.

Also, DisplayPort is more versatile than HDMI, because – with use of an adapter – you can convert to any monitor you want such as HDMI, DVI or VGA. Modern mid- to high-end monitors now include both HDMI and DisplayPort connectivity. For monitors with only HDMI, you need to add a “DisplayPort to HDMI” adapter. For more details, see our feature on the difference between DisplayPort and HDMI.

The TS3 Plus features an all-aluminium body that’s better for heat dissipation.

CalDigit also sells a non-Thunderbolt USB-C Dock, which can charge at 60W (compared to the TS3 Plus at 87W) so is less suitable for the 15in MacBook Pro or other higher-power USB-C laptops, but fine for the 12in MacBook.

The TS3 Plus also beats most other docking stations with its audio features. It has separate Audio In and Out ports on its front, and also a professional-level Digital Optical Audio (S/PDIF) port at the back.

It’s small but packed with ports, and being a Thunderbolt 3 device this dock is more powerful and capable than a simpler USB-C dock. You can connect two displays to a MacBook Pro in Extended mode with just one cable going into the laptop, which can also be charged at 87W.

If you’re looking for a more-than-able multi-port dock for your MacBook, the CalDigit TS3 Plus looks hard to beat… unless you look at the newer Caldigit TS4, of course. The TS3 remains a more than able docking station and is more affordable.