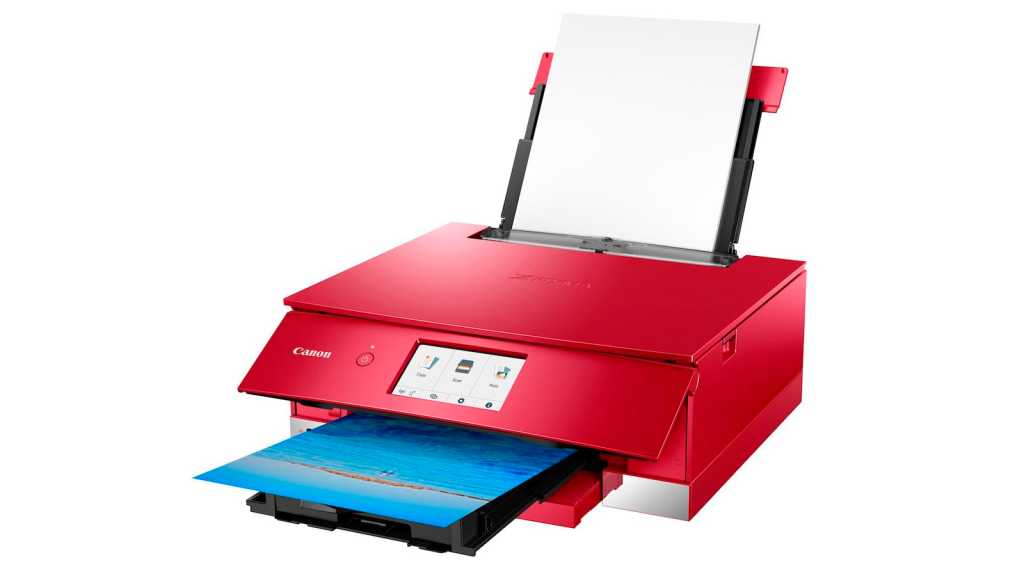 If you’re looking for a basic, low-cost document printer, this isn’t for you. But the TS8250 offers tremendous print quality at an impressive speed, along with a good range of features.

Canon’s recently released TS8250 is seriously colourful – in more ways than one. Available in an eye-catching shade of red, along with more conventional black and white versions, the TS8250 is a specialist printer aimed at photo enthusiasts and creative users who want the very best colour quality for their work. And, in order to achieve that quality, it uses no less than six different coloured inks to produce striking photos and graphics.

Most conventional inkjet printers use just four colours – cyan, magenta, yellow and black – to print text, graphics and photos. However, the TS8250 uses those four colours, along with a special shade of ‘photo blue’ to produce very subtle shades of colour in your photos: a warmer blue sky for your holiday snaps, or more delicate skin tones in your portrait photos. The sixth ink is a special ‘pigment black’ that is used to produce extra crisp, sharp text for letters and other text documents.

We put the Pixma TS8250 through some serious testing in our labs. Here are our thoughts on whether it’s a suitable printer for a Mac owner. For more general advice, see Best printers for Mac.

(US readers should note that this model is designed for the UK market. Canon assures us that the TS8220 – also available from Amazon – is the same in all respects, except that it’s designed to support US paper sizes.)

Multicolour design aside, the TS8250 isn’t the most elegant printer we’ve ever seen: it’s resolutely rectangular and rather slab-like, with hard edges and corners all around. Even so, it’s quite neatly designed, measuring 373mm wide, 319mm deep and 140mm high, so it’ll fit on to a small desk or shelf at home without too much trouble.

Canon also does a good job cramming in a wide range of features, which will be useful both at home or in a small office.

The TS8250 is a multifunction printer that combines 1200 x 4800dpi printing with a 2400 x 4800dpi scanner and copier. It provides both USB and Wi-Fi connectivity, and supports Apple’s AirPrint so you can quickly print photos from an iPhone or iPad.

With creative users in mind, the TS8250 includes no less than three different trays that can handle a wide range of different papers and other media.

The main paper tray at the front of the printer holds 100 sheets of plain office paper, while the second tray at the back is for glossy photo paper, envelopes, or heavier papers that hobbyists can use for fine-art prints. There’s also a ‘multi-purpose’ tray that slides into the body of the printer and can be used for printing on CD or DVDs – or even on Canon’s ‘printable finger nail stickers’ – so Instagram addicts can wave their selfies around on the end of their fingers.

Despite the apparent complexities of the six-ink printing system, the TS8250 proves to be a fast performer.

Canon quotes speeds of 15 pages per minute (ppm) for mono printing and 10ppm for colour, while 4x6in postcard prints should take around 17 seconds. Our tests actually came in at 13ppm for plain text documents, 8ppm with a variety of text-and-graphics files, and a snappy 20s for glossy photo prints, so the TS8250 can certainly handle as much work as you’re likely to throw at it.

Our photo prints were bright and bold, but also capable of capturing smoothly graduated colours on skin tones as well. Text quality is crisp and sharp too, so the TS8250 can handle routine text documents as well as it handles high-quality photos and graphics.

We were worried that using six inks in the TS8250 would prove expensive when it comes to buying replacement cartridges. Sure enough, if you buy each of the six individual cartridges separately, the cost can mount up quickly.

Fortunately, Canon sells a number of multi-packs that contain the five main coloured inks, and this helps to reduce overall running costs for photos and colour printing quite a lot. You’ll still need to buy the sixth ink – the pigmented black ink – separately, but that makes sense as it’s only used for printing text, and will run out at a different rate to the coloured inks.

(Note that the range of multi-packs can be bewildering. You’ll also see six-ink packs, and five-ink packs that include pigment black but not photo blue. We think the cyan-magenta-yellow-black-photo-blue combination makes most sense.)

Canon sells the five-ink multi-packs in three different sizes – standard, XL, and XXL, and if you shop around online you can find these for around £44.45, £58.45 and £84.95 respectively. This is where things get a bit complicated, as each of those five inks lasts for a different number of pages, but a spot of number-crunching in Excel eventually allowed us to calculate the typical cost-per-page for colour printing with each of the multi-packs.

The standard multi-pack works out at just under 13p per page for colour printing, which would be a bit steep for an ordinary four-colour printer, but just about acceptable for a specialist printer such as this. And, when you step up to the XL multi-pack, that cost drops to around 7.8p per page, which is much more competitive. The XXL multi-pack shaves almost another penny off that price, coming in at just under 7p per page, which is a good price for the TS8250’s high-quality photo output.

However, like most inkjet printers, the TS8250 still has a sting in the tail that you need to watch out for. In this case, it’s actually straightforward mono text that proves rather pricey.

The larger cartridges do help to cut the cost, with the XL cartridge working out at 3.9p per page, and the XXL cartridge dropping only slightly to 3.6p per page. The prices with the XL and XXL cartridges are still a little above average, but they’re just about acceptable if you know that you’ll mostly be using the TS8250 for printing photos and colour documents, with only the occasional letter or other text documents.

If you just want a low-cost printer for letters and other routine documents then the TS8250 isn’t the best choice. But if you’re a keen photographer, artist, or designer who wants to print high-quality photos and other colour graphics then the TS8250 will be just what you’re looking for.