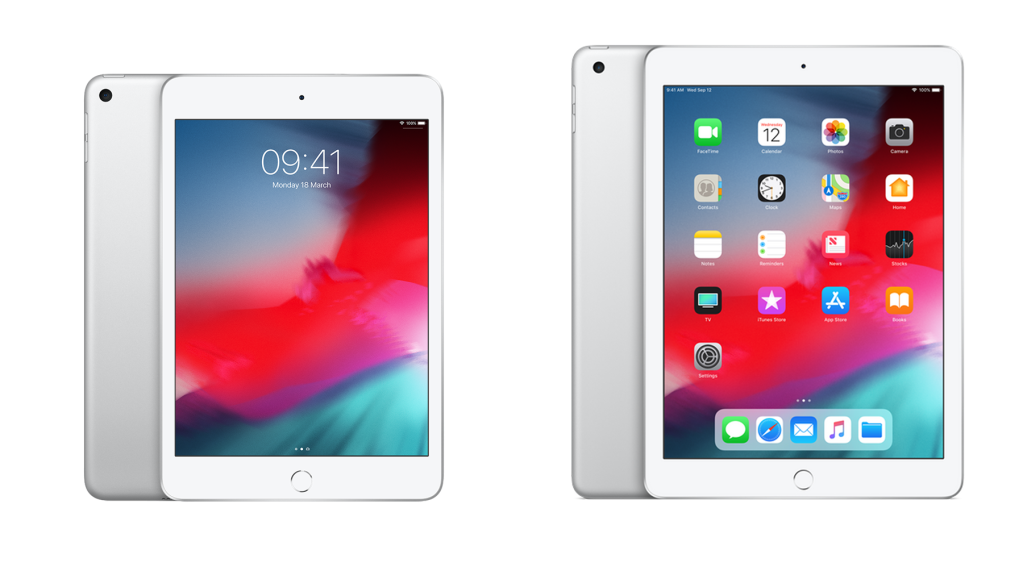 Apple’s surprise update to the ailing iPad mini line brings it bang up to date with high-end processors, increased storage options, various little improvements, and Apple Pencil support. While the iPad 9.7in (2018) is a very good deal, you’ll really want the 128GB version and that is around the same price as the 64GB iPad mini (2019). If you don’t mind a smaller, but higher quality, display and can live with less storage then we think the newer model is now the best of the ‘budget’ breed.

While many thought the iPad mini was about to be retired from active service, Apple has done the opposite and updated the diminutive tablet for 2019, along with the introduction of a new iPad Air. This gives consumers more options when wanting to avoid the high-costs of the iPad Pro line.

In our iPad mini (2019) vs iPad 9.7in (2018) comparison, we see how the two most inexpensive iOS tablets compare and which one you should be adding to your shopping list. For a look at all of the current iPad range read our iPad buying guide and Best iPad deals roundup.

The new Apple iPad mini (2019) was announced on 18 March, with the device being immediately available to order either directly from Apple or the usual outlets such as Amazon and Currys/PC World.

It comes in two storage capacities and either Wi-Fi or Wi-Fi+Cellular configurations. The prices are as follows.

Apple updated its iPad 9.7in, meanwhile, back in March 2018, adding better processors and Apple Pencil support. It remains the cheapest model in the current catalogue, and in our opinion is still an excellent choice for most people who just want an inexpensive, versatile tablet.

Both devices are available in gold, silver and Space Grey.

The new iPad mini retains the design of its predecessor, the iPad mini 4 released back in September 2015. This means you have the same sized 7.9in display, wider bezels than on the new Pro line, Touch ID rather than Face ID and therefore a Home button, headphone jack, stereo speakers, and a Lightning charging port.

There are a few subtle upgrades, as you’ll see below, but for the most part this is the iPad mini form factor that has been used by Apple for the past four years.

It’s a similar story with the 9.7in (2018) iPad, which retains a style and size that are almost identical to the iPad Air 1 that launched in 2013. The only minor changes, externally, are the Touch ID-enabled Home button and rejigged speaker grills, but otherwise it’s again, a very familiar sight. 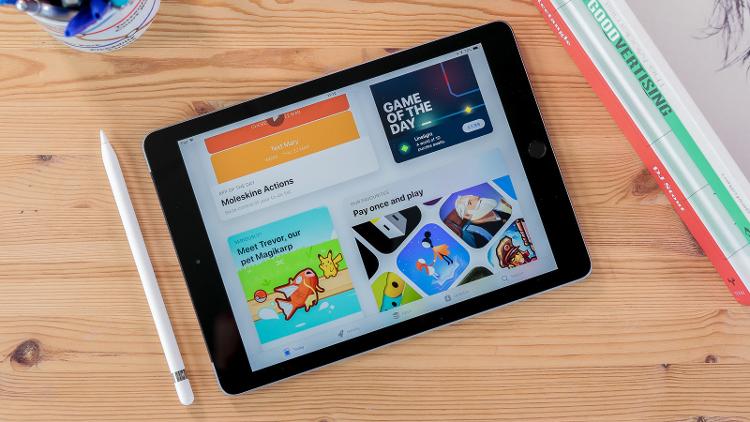 If you’ve handled a 9.7in iPad or iPad mini in the last few years, then you’ll know exactly what to expect. Both are lightweight, comfortable to use devices, hence the enduring nature of the designs.

So, what are the key factors that these competing iPads bring to the table?

When Apple upgraded the iPad 9.7in (2017) model it added a few key features that make the newer variant a great value-for-money product. Firstly, there was a bump in specs as the A10 Fusion chip that provided the brainpower for the iPhone 7 and 7 Plus made its way to the iPad 9.7in (2018).

This is a solid processor that can easily handle most daily duties that people demand of an iPad, such as web browsing, watching videos, creating documents, playing games and managing emails. A year on and things haven’t changed a great deal, although the older hardware does mean that graphically demanding games or processor intensive activities such as making music with GarageBand can prove more of a challenge. 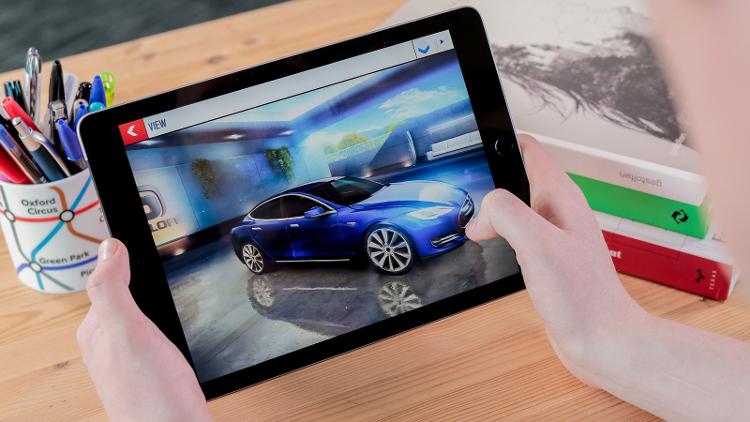 In the new iPad mini (2019) Apple has given its smallest tablet a big boost internally with the A12 Bionic chip. The company states that this is 3x faster than the A8 found in the iPad mini 4, and is the same processor used in the new iPhone XR, XS and XS Max.

One of the criticisms levelled by our own David Price when reviewing the iPad 9.7in (2018) was the lack of a laminated display. While for the most part this won’t bother the majority of people, especially if they haven’t used one before, it does mean there is a slight gap between the glass and the actual display.

This is a cost cutting decision for sure, as pretty much all iPads since the Air 2 have arrived with the expected lamination, but it does slightly detract from what is an excellent package. 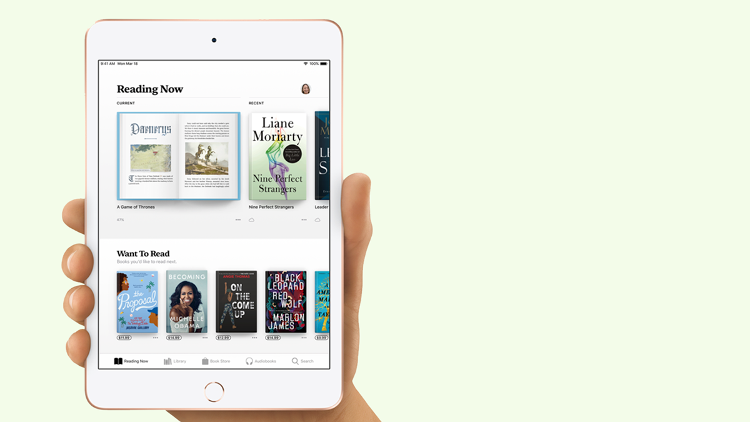 The iPad mini (2019) not only avoids this particular downside of its stablemate, but also upgrades its 7.9in display to include Apple’s True Tone technology. This measures the ambient light in the surrounding area to adjust the colour and warmth of the display. It’s a gentle effect that can help prevent eye-strain during prolonged sessions, and while not a system seller, it’s nice to have.

An anti-reflective coating has been applied to the mini, while absent on the 9.7in model, plus it has a higher pixels per inch count of 326ppi versus the 264ppi on the larger device, making the mini sharper when rendering text and images.

Now, the iPad mini (2019) splits the difference and starts at 64GB, which could well be enough if your primary interest is surfing the web, some creative projects, and storing a few films for long journeys. This again is around the £400/$400 mark, so how you use your iPad will go a long way to determining which of the two suits your needs.

For complete safety, Apple has expanded the top-end option now to double the larger iPad’s offering, with 256GB on the iPad mini (2019). This does add a not inconsiderable £150/$150 to the price, which then takes you into the realms of the 64GB iPad Air, which complicates matters even further.

It’s best to decide what you want to do with your device, how much storage you need to achieve this, and how much money you have to spend. Bear in mind that you’ll probably need a case, and around £100/$100 to spare if you want to make use of the feature in the next section.

One of the big announcements when the iPad 9.7in (2018) was released was its support for the first-generation Apple Pencil. This brought the artistic capabilities of higher-tiered models down to where most people could afford it.

In practice it works very well, although our review found that the unlaminated display made it a tad lesser of an experience than on other iPads. 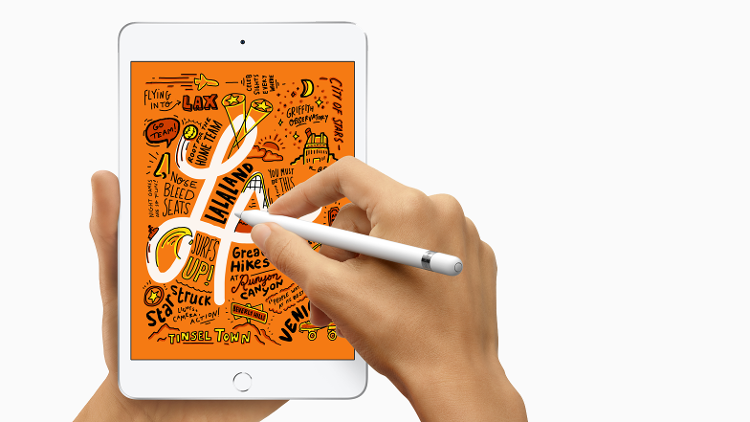 Now, the iPad mini (2019) comes with the same feature, again just for the first-generation Pencil. As a notepad, the smaller form factor could prove ideal, but those wanting to create art might find the extra room of the 9.7in display more tempting.

For more advice on this, see Which iPads work with which Apple Pencils?

Selfies get a facelift

The main cameras on both devices are the same 8Mp f/2.4 lens that offers HDR for photos, 1080p video recording, Slo-Mo for 720p at 120fps, plus burst and timer modes.

Where they differ is on the front optics. The iPad 9.7in (2018) has a rather paltry 1.2Mp FaceTime HD camera that maxes out at 720p for video. Apple has upgraded the iPad mini (2019) to a much better 7Mp unit that can record 1080p with Auto HDR for photos and video.

You won’t find the Portrait mode like on the iPhones (it needs two lenses for that) but the higher-quality camera should give video calls a welcome bit of spit and polish. 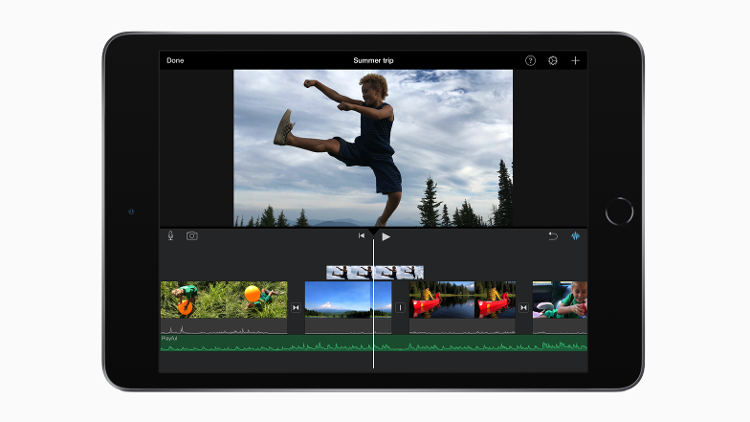 Here’s the full list of specifications you get for each model.

The iPad 9.7in 2018 is, as we’ve said before, one of the best deals that Apple offers. It’s a classic design, highly usable display size, fast enough for most things, and won’t break the bank. Just make sure you opt for the 128GB version rather than the 32GB one. If you want a go-to device for media consumption and web browsing, then it’s easy to recommend.

But, with the surprise update to the iPad mini, Apple throws a little spice into the mix. Faster processors are always desirable, especially if you want to future-proof your device to some degree. The laminated display is another worthy upgrade, plus the superior FaceTime camera could be a real boon if you use your iPad to create YouTube videos or just for FaceTime calls with family and friends.