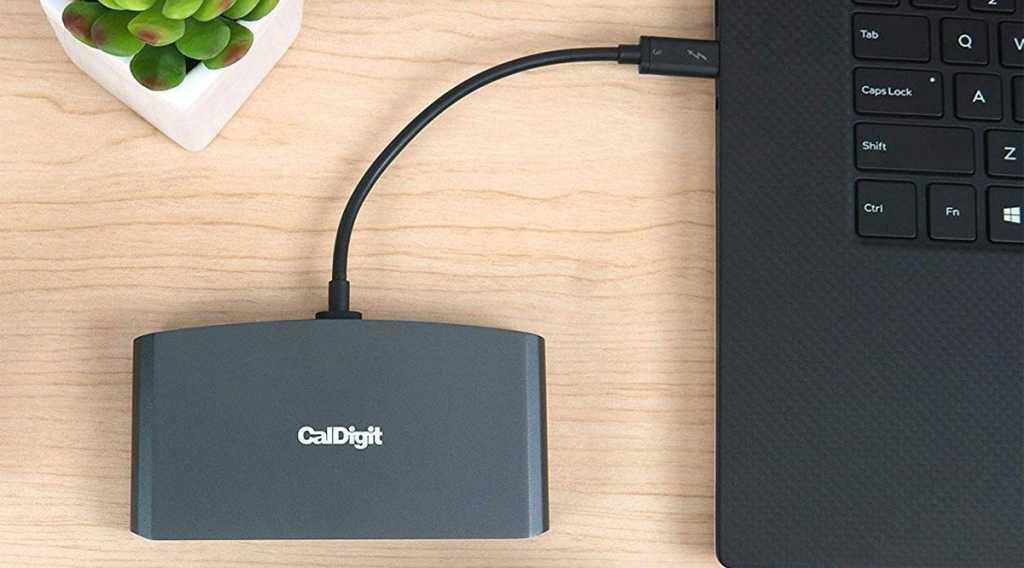 The CalDigit Thunderbolt 3 mini Dock proves its value over cheaper USB-C docks by offering full power to connected devices and being capable of running two 4K displays at 60Hz.

You can quickly create a desktop-like setup with such a docking station, connecting up to two high-resolution displays, and adding wired Ethernet, plus mouse/keyboard and other USB-A devices. For more options, check our roundup of the best Thunderbolt 3 and USB-C docking stations.

There are two models of the Thunderbolt 3 mini Dock: Dual HDMI and Dual DisplayPort. Both are very portable in lightweight but sturdy aluminium, and feature an attached Thunderbolt 3 cable.

We very quickly got the HDMI miniDock up and running with our MacBook Pro and two 4K monitors.

Crucially, because of they boast the superior Thunderbolt 3 to the identical but weaker USB-C, the two miniDocks can run 4K at 60Hz, which is preferable for watching sports and high-action movies as well as gaming. Non-Thunderbolt 3 USB-C docks can handle two 4K displays, but only at 30Hz resolution.

One of the main differences between the mini Docks and the TS3 Plus is the power supply. While the TS3 is powered and can charge a laptop at up to 85W (required for full-speed charging of a MacBook Pro), the mini Dock draws up to 15W from the laptop itself – so you will need to power the laptop separately.

This level of power is possible because the mini Dock uses proper 40Gbps Thunderbolt 3 and not plain and simple USB-C, like many docks that manage just 7.5W and so may suffer power issues.

And power is the reason they don’t feature too many ports. The USB port (one on the dual DisplayPort model, and two on the dual HDMI model) plus the Ethernet port keep power requirements under the 15W maximum.

You can buy much-cheaper docks studded with many ports, but these won’t boast the power they require when fully or even partially loaded.

The mini Dock works with both Mac and PC (Windows users should check their laptop can handle two streams over Thunderbolt 3), but do require the laptop to feature Thunderbolt 3 rather than plain USB-C. Recent MacBook Pro and the latest MacBook Air use 40Gbps Thunderbolt 3, but the 12in MacBook has the weaker 5Gbps USB-C.

The Calldigit miniDock is a great portable Thunderbolt 3 dock, with options for whichever display connector you require.