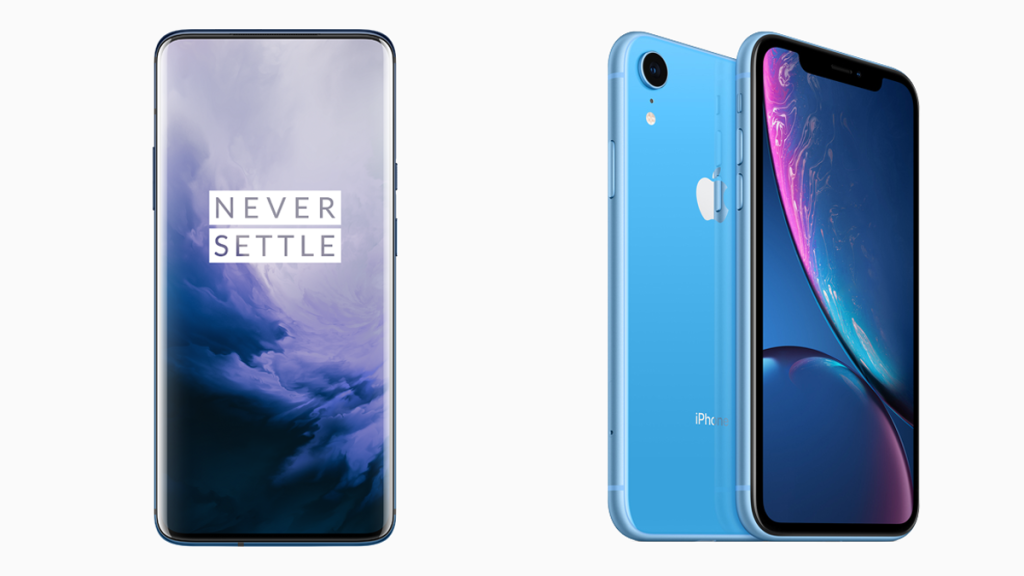 Apple fans will enjoy the colourful looks and feel of the iPhone XR. It features many of the same specs as the iPhone XS and XS Max, has a character of its own that’s sure to catch the eye, all while delivering a fast and fluid experience. Taking that into consideration, it’s hard not to be drawn to the OnePlus 7 Pro instead. It also boasts impressive hardware and design, but can be picked up with four times the storage and memory of the XR for pretty much the same cost. Both are great, but the OnePlus 7 Pro is greater still.

OnePlus has been making quite a name for itself over the last few years by offering high-end devices at decidedly mid-range prices. True, the cost of buying into the OnePlus way of life has been rising slowly with each new smartphone (it releases two per year), but if you’re looking for the best value Android handset then it has become the first port of call for many.

So, how does its latest offering – the OnePlus 7 Pro – compare to Apple’s own lower-priced, but still expensive, iPhone XR? We put the two head to head.

The OnePlus 7 Pro was released on the 21 May and comes in the following three varieties:

To accompany it, OnePlus has also announced the slightly less flashy OnePlus 7 which will make its debut sometime in June and start at £499. There are no plans for a US release at the moment.

You can order the 7 Pro directly from OnePlus or at retailers such as John Lewis.

Apple’s iPhone XR is marketed as a less expensive model and while that’s technically true, it’s only when compared to the iPhone XS and iPhone XS Max, both of which push the £1000/$1000 envelope.

Like the OnePlus 7 Pro, there are three models on offer:

You can buy the iPhone XR directly from Apple or from a wide variety of other vendors, including John Lewis which also offers a two-year warranty rather than the one from Apple.

Be sure to check out our guide to the Best iPhone XR deals on offer at the moment, to see if you can pick up a bargain.

The iPhone XR takes its inspiration from the iPhone X, with the Home button being replaced by the now infamous notch at the top of the 6.1in LCD display, housing the Face ID cameras and sensors.

There have been a few choices made to reduce the cost of production from the top-tier models, with the chassis being aluminium rather than stainless steel and the aforementioned LCD panel employed rather than the superior OLEDs found in the iPhone X, XS, and XS Max. There’s also only a single 12Mp camera on the rear, which again is less than you’ll find on its more illustrious siblings.

Ports are minimal, with a solitary Lightning one being all that’s on offer, joined on the body by stereo speakers, volume and power buttons.

Holding the iPhone XR shows it to be a fairly large unit, so we’d recommend considering this a two-handed device unless you have fingers like basketball players. A glass back also allows for wireless charging with any standard Qi charger and if you buy (as it’s not included) the Apple fast charger then you’ll be back to full power in no time at all.

Apple seems to have decided that this will be its fun model, as it comes in a wide range of bright colours – Blue, Red, Yellow, Coral (kind of peach) – alongside the standard Black and White liveries.

OnePlus has a small selection of hues on the 7 Pro too, with Blue, Grey, and Almond available, depending on the configuration you choose. These adorn the metal body and 3D Corning Gorilla-glass back while the front panel is dominated by a 6.67in QHD+ AMOLED display.

You won’t find a notch here though as OnePlus has opted for an embedded fingerprint sensor under the screen.

There’s no circular aperture for the camera either, as you find on the Samsung S10, because OnePlus uses a pop-up lens that disappears into the body when not in use. Pretty cool, it must be said.

That’s not all, though, as turning the device over reveals triple lenses on the rear offering the standard/ultra-wide/telephoto combination that is proving very popular lately.

USB-C is the port of choice, with the rest of the hardware compliment including stereo speakers, plus the normal control buttons. Curved edges to the display make the device feel slimmer than you might expect, but it still remains large in the hand, much like the iPhone XR, albeit very slightly wider, thicker, and quite a bit taller.

While the iPhone XR might not come with all of the components that grace its higher-priced stablemates, it still has a large portion of the iPhone magic on hand. Under the hood there’s the same A12 Bionic processor that graces those other models, replete with the Neural Engine that Apple claims adds plenty of power to the camera results.

The camera itself is another winner, boasting Smart HDR for better low and brightly lit scenes, plus improved Bokeh effects in the Portrait mode. Face ID means unlocking the device is very fast, ensuring that it’s often done so before you’ve even realised, and is much safer than the fingerprint option of Touch ID.

The 6.1in ‘Liquid Retina’ LCD display is not quite as good as an OLED panel, but it remains arguably the best one of its kind we’ve seen and should also reduce the battery drain that often accompanies OLED technology.

OnePlus has come out swinging with the 7 Pro, fitting it with the latest Qualcomm Snapdragon 855 octa-core processor, and the option for either 6GB, 8GB, or an incredible 12GB of RAM. Now, it’s true that Apple is legendary for its RAM management, so the 3GB in the iPhone XR isn’t quite as bad as it seems, but 12GB really should beat it hands down.

Storage in the OnePlus uses the brand new UFS 3.0 technology that makes it one of the fastest of its type, and the first smartphone to be released using the standard. This makes for silky smooth operation when opening apps, accessing data, and use in general.

The triple cameras are comprised of a 48Mp f/1.6 lens with OIS, a 16MP f/2.2 ultra-wide, and an 8Mp f/2.4 telephoto. It’s a very useful combination that should return excellent results in a wide range of circumstances. We’re big fans of the ultra-wide option, as it makes capturing epic scenes that much easier.

A pop-up camera might seem a bit gimmicky, but it allows for an unencumbered 6.67in QHD+ display, and what a gorgeous expanse it is. Colours are vibrant, details crisp, and the tiny bezels only add to the sumptuous nature of the Pro 7.

When the camera is engaged it appears out of the top of the unit, then dutifully departs once its job is done. OnePlus has even included sensors to alert the Pro 7 of being dropped so it can automatically retract the lens. Smart.

Here’s a breakdown of the technical specs for both devices.

As with all recent iPhones, the XR runs iOS 12 which focusses on improving performance rather than adding to many new features. That being said, it did see the introduction of Screen Time, Memoji and various enhancements to Animoji, grouped notifications, and other refinements that you can read about in our iOS 12 review.

The iPhone XR should continue to cope with upgrades for several years to come, including of course iOS 13 which will be unveiled at WWDC on 3 June 2019.

The OnePlus 7 Pro runs the latest version of Android (9.0 Pie) with its own Oxygen OS on top. It’s a very pleasing combination with plenty of customisation available, all without ever getting bogged down by bloatware.

Notifications can be signalled by the sides of the screen lighting up a certain colour, there’s a Gaming mode to prevent pop ups or messages from spoiling your adventures, plus many other clever and genuinely useful features.

Aside from the pure version of Android you’ll find on the Pixel 3a and its Google cohorts, we think this is the best version of the operating system you can use at the moment.

Usually a OnePlus phone comes with the caveat of it being ‘good for the money’, but with the 7 Pro that would be patronising. The 7 Pro is not good for the money at all, it’s great, excellent in fact. The hardware design is top drawer and backed up by some serious processors, RAM, and storage options.

While the iPhone XR is a very solid choice for those wanting an iOS device that has moved on from the days of Home buttons, it still comes with a high price. This is made more obvious by the fact that the top spec OnePlus 7 Pro comes with four times the storage and RAM as the base iPhone XR, and all for only £50 more in the UK and at no additional cost in the USA.

If you want an iPhone, then the XR will make you happy, if you want the best device then the OnePlus 7 Pro is one to choose.