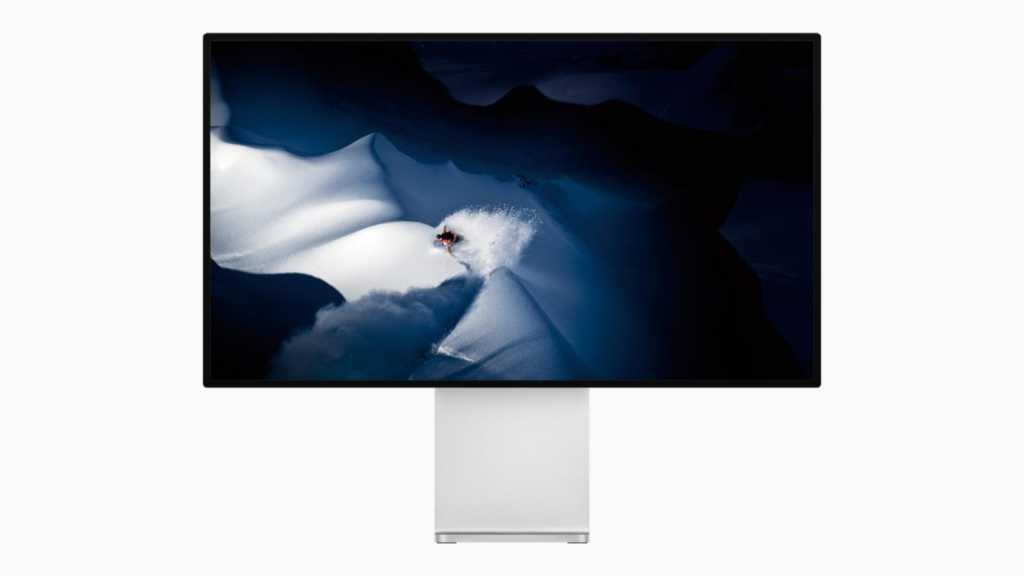 Apple’s highly specced Pro Display XDR is a stunning piece of engineering, and we found it hard to find fault with the picture quality and colour output in our brief hands-on testing. But it’s clearly too early to reach a definitive verdict on whether this will be worth $6k of anyone’s money, and we look forward to getting a review sample back to our labs for detailed testing.

At the WWDC 2019 keynote last night (3 June), Apple talked mostly software – but also found time to unveil its new premium Mac Pro and the premium Pro Display XDR monitor that goes with it.

The XDR is phenomenally well-specced: it’s 32in and 6K, offering 40 percent more screen space than Apple’s 5K displays, and offers a peak brightness of 1,600 nits (or 1,000 sustained). But is it worth the eye-watering price tag?

We got to spend some hands-on time with the Pro Display XDR in the backstage areas at WWDC, and quickly put together this guide. Our first impressions, as you’ll see, are distinctly positive.

Okay, about that price tag. The XDR is seriously expensive:

(We’ve only got US pricing so far, but expect UK prices to be similar or slightly lower numbers, in pounds. Do not expect it to match the exchange rate or you’ll be disappointed.)

And just buying the monitor isn’t the end of the story – because it doesn’t come with a stand. Unless you’ve already got a compatible VESA mount, or you’re happy to prop the monitor against your Mac Pro, you’ll also need to shell out for either the height-adjustable Pro Stand (very nice, but $999) or a VESA Mount Adapter ($199).

But here’s a counterpoint: this is an expensive monitor by consumer standards, but it really isn’t a consumer monitor. It’s intended for a professional audience: a post-production company or a visual effects studio. At the end of the demo, Apple compared the Pro Display (total cost $6k) against a $35k Sony reference monitor and it was almost as good in some ways and better in others – so bear in mind that this is a fairly unexceptional price in the market Apple is going for.

Availability-wise, a little bad news: the Pro Display XDR isn’t out yet, and won’t be out until the autumn. That’s as specific as Apple is prepared to be at this point, but you can sign up to be notified when more news is available here. (Click or tap Notify Me at the top right.)

Aesthetically speaking the XDR has an idiosyncratic design that matches the 2019 Mac Pro but will divide opinions. It has the same ‘cheese grater’ aluminium surface on the back (you won’t see this much, to be honest, so needn’t worry you too much), and lots of super-minimalist right angles that may strike you as refreshingly brutalist or boring. 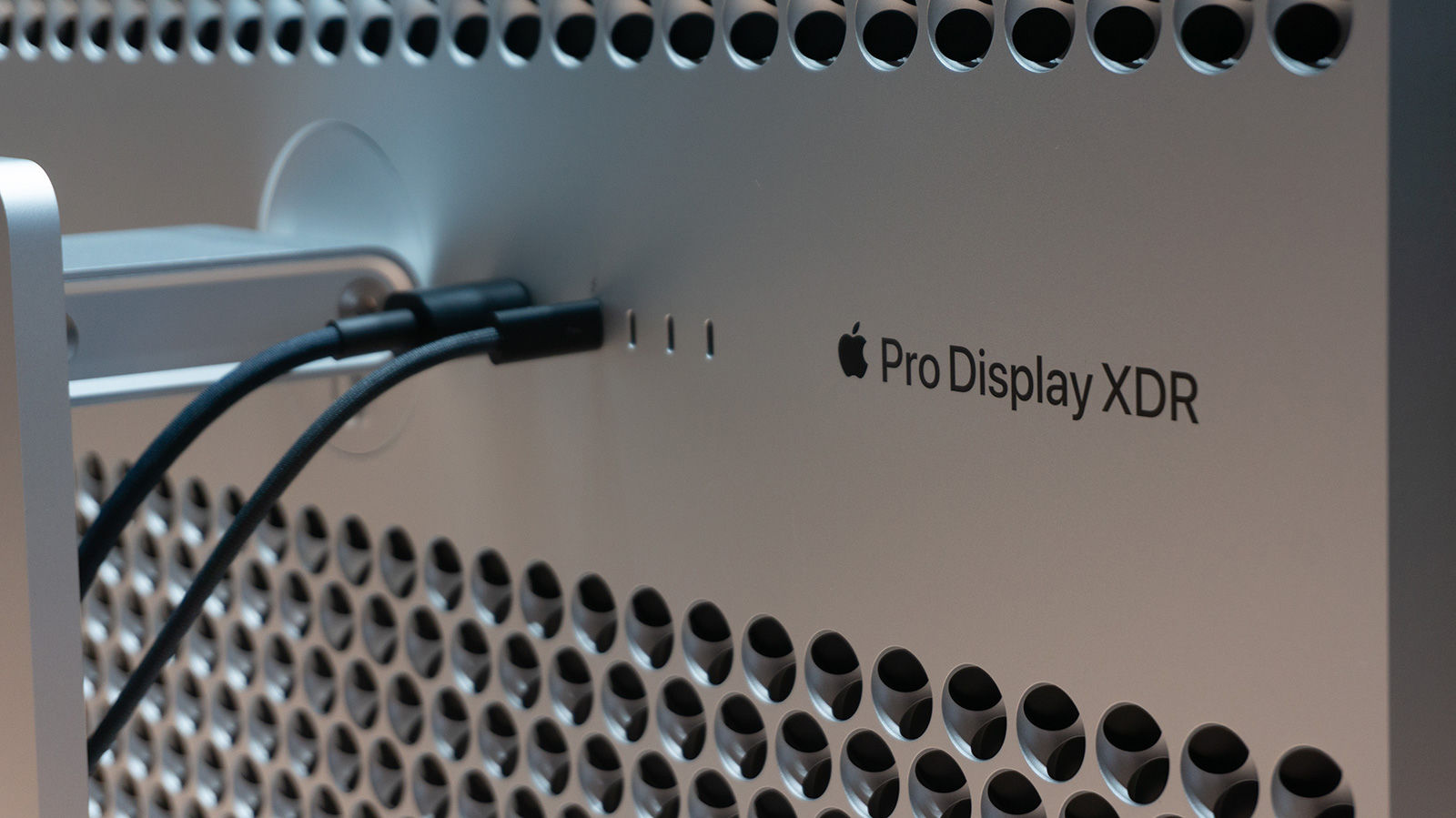 Amusing as the tech journalists may find this holey exterior, it serves an important design purpose: it massively increases the amount of air that can reach the metal surface, thereby acting as an effective heatsink. It also makes the monitor lighter than if it was a solid chunk of metal: it’s 7.48kg, so make your own judgement on whether you fancy carrying it from room to room. 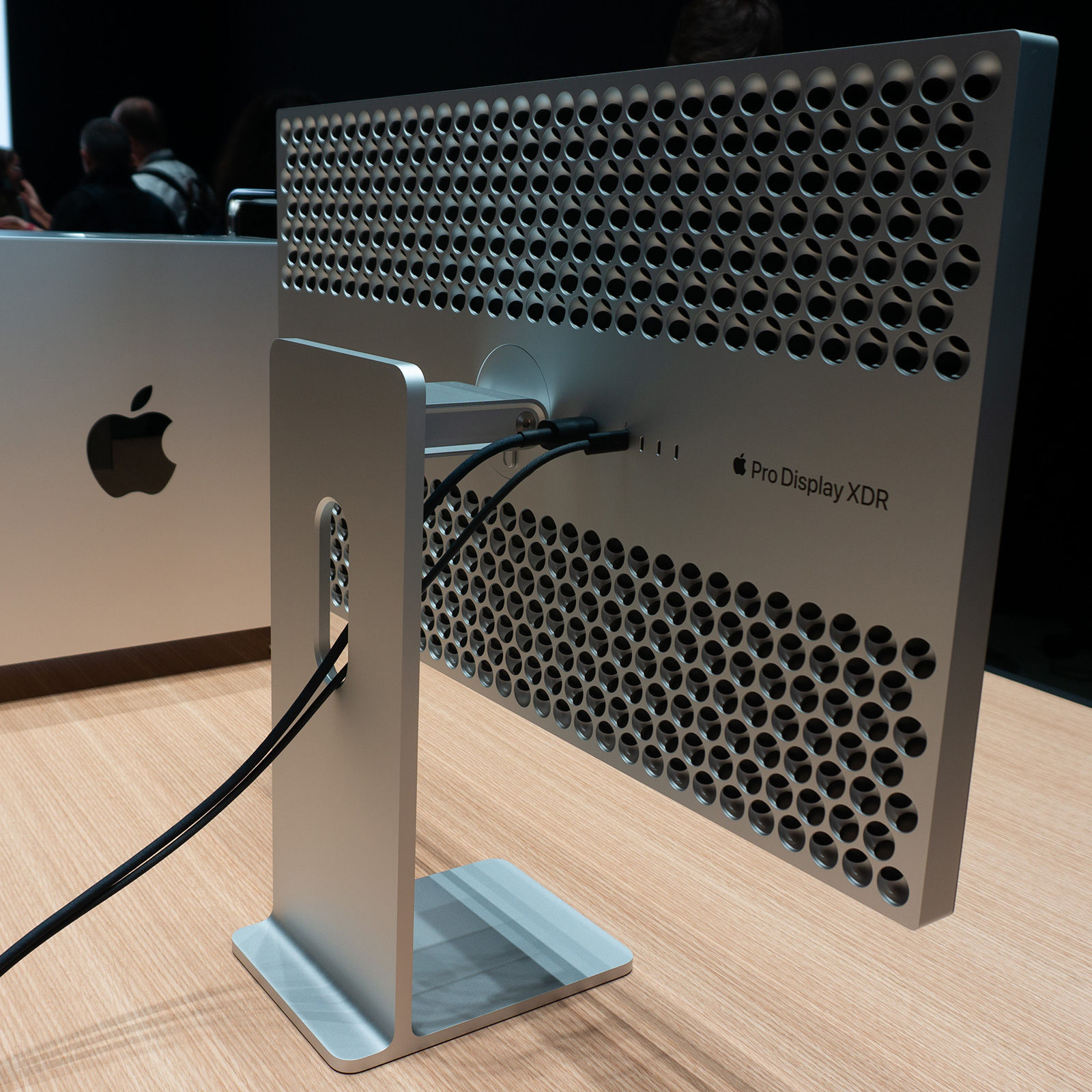 The front of the monitor can only really be described as utilitarian. The border around the edge of the screen is slim (9mm thick) so you’re really just getting screen and more screen – which is the way it should be, really. 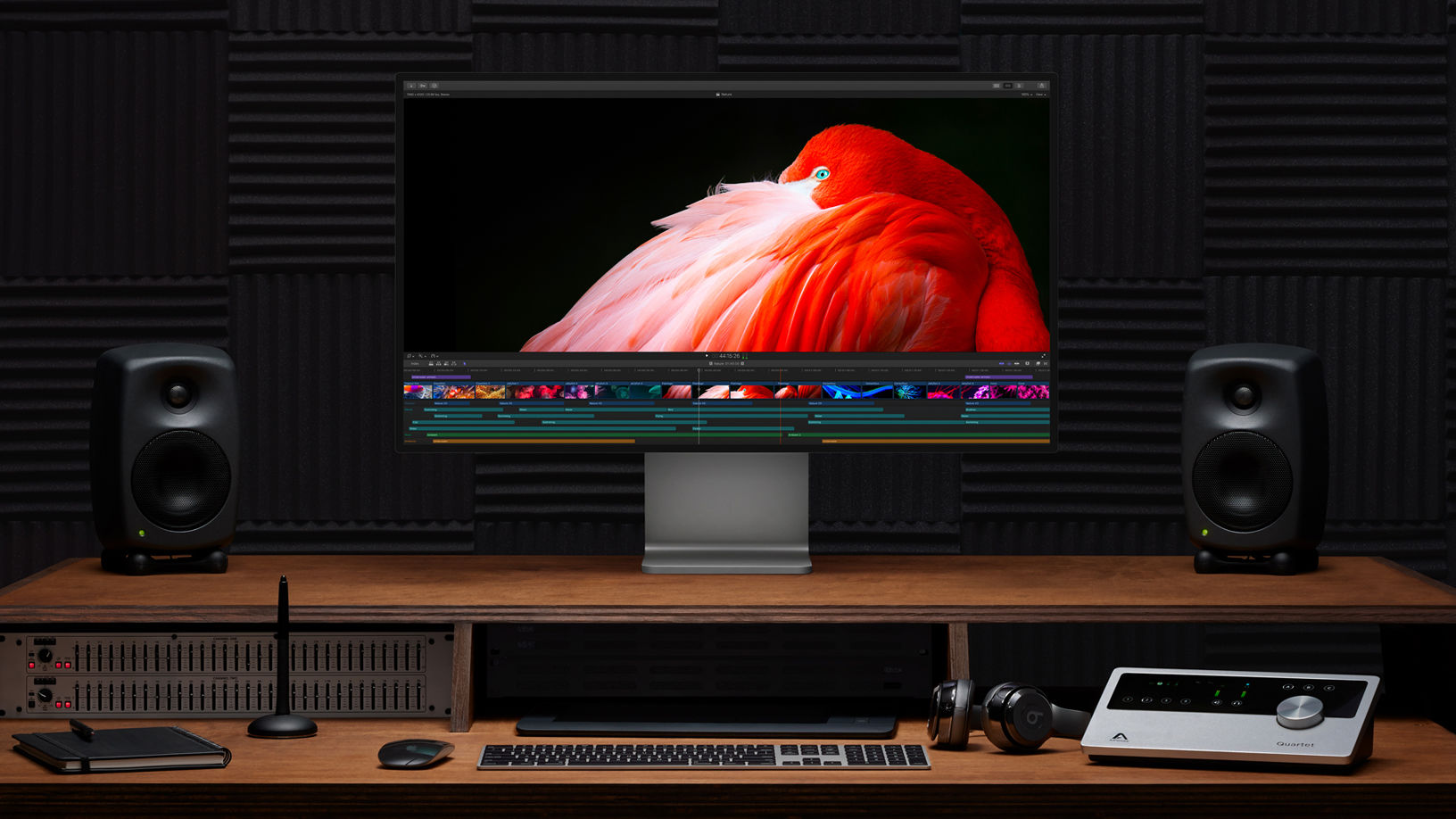 The Pro Stand is height- and angle-adjustable, and Apple boasts that the built-in counterbalance makes this smooth and easy – but sadly we weren’t allowed to touch or play with the stand mechanism at WWDC. 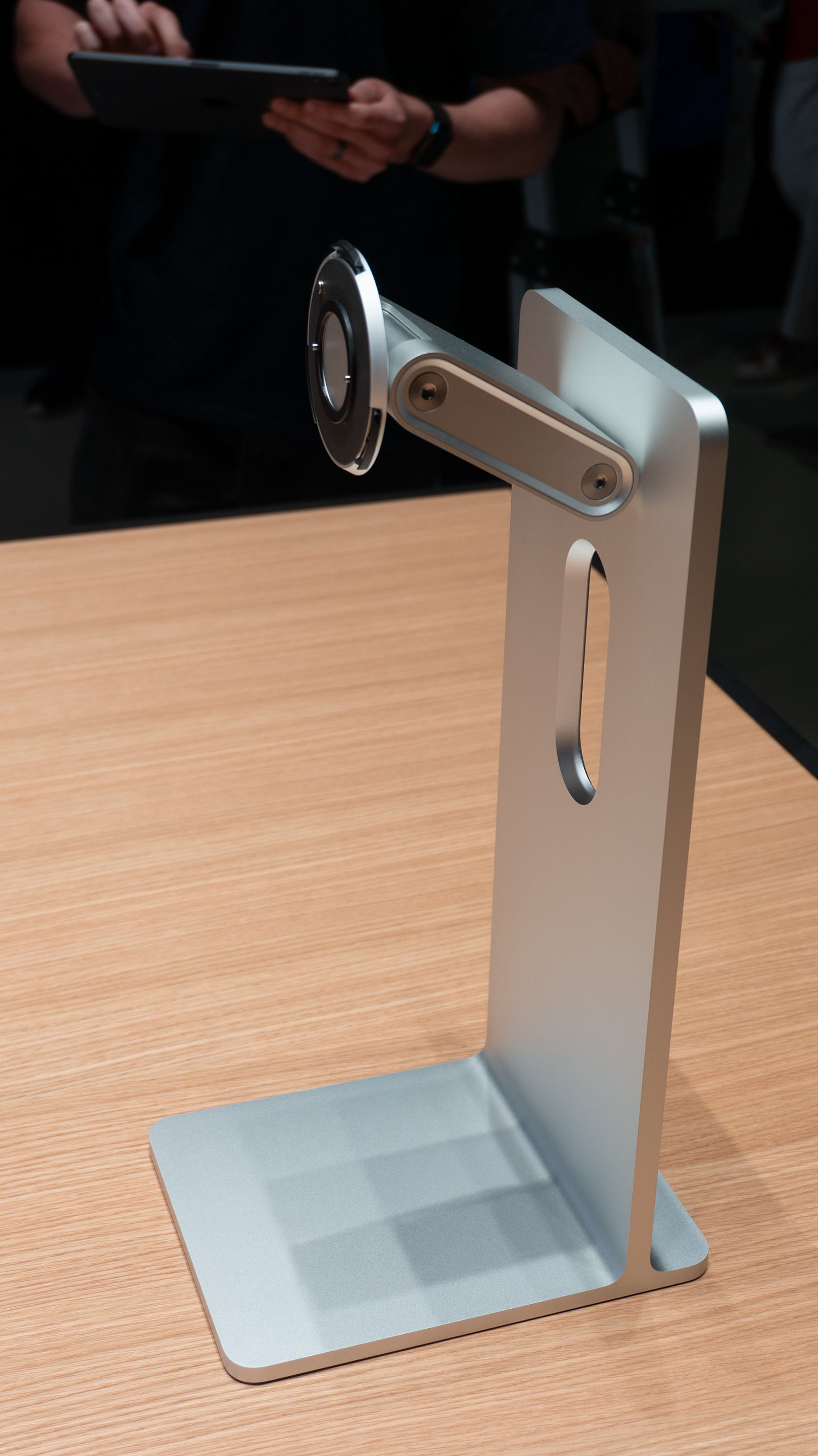 Round the back you’ll find a moderate sprinkling of ports: a single Thunderbolt 3 and three USB-C. Although this monitor is designed to complement the new Mac Pro, it’s easy to connect it to other Mac models.

Based on our testing time, the picture quality on this display is truly stunning. The photos, video and animation we saw were vibrant and full of depth. (They also struck us as rather over-saturated, but we think that’s just because Apple chose really bright imagery to show off the monitor’s capabilities.)

Picture quality is maintained at ultrawide viewing angles, thanks to industry-leading polariser technology. This is so that a creative team can gather round a single monitor and evaluate a photo, video or design project without suffering a loss of consistency.

Apple says you get “up to 25x better off-axis contrast than a typical LCD”, but we’ll need to do more testing in lab conditions to get an idea of how effective this is.

Impressively, the monitor offers a P3 wide colour gamut and 10-bit colour depth. (Macs have been able to display 10-bit colour since the launch of Mac OS X El Capitan; the only limitation has been the display.)

Application developers will likely have to add support for the extended colour range. Apple demonstrated an as-yet-unreleased beta version of Affinity Photo with a button to turn on ‘EDR’ – as the beta calls Extreme Dynamic Range. The additional colour detail, especially in highlights and shadows, was immediately obvious.

You’d expect it to be tough to show this using non-DHR Jpegs, but it’s surprisingly clear – here the effect is off: 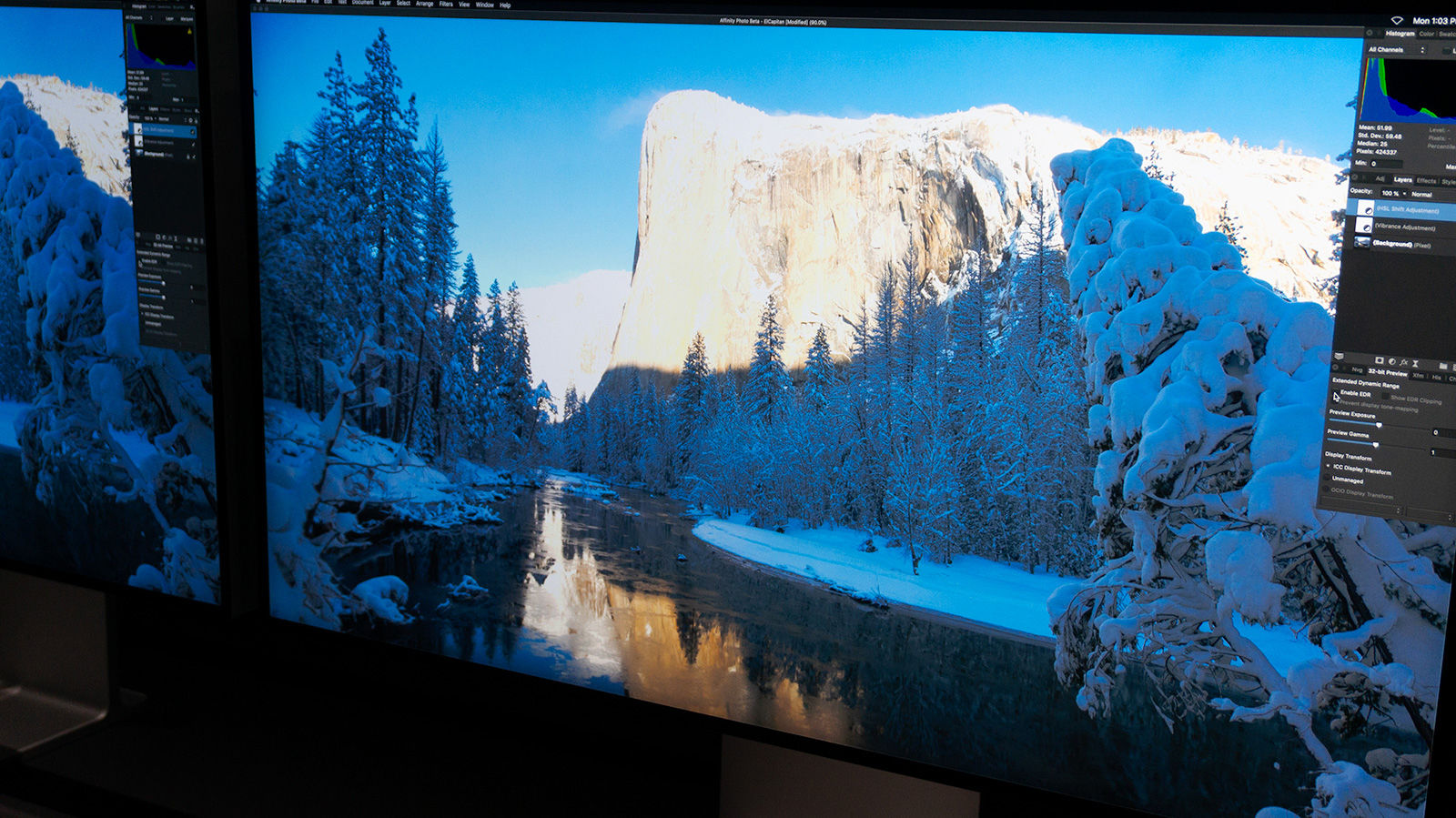 And here it’s on: 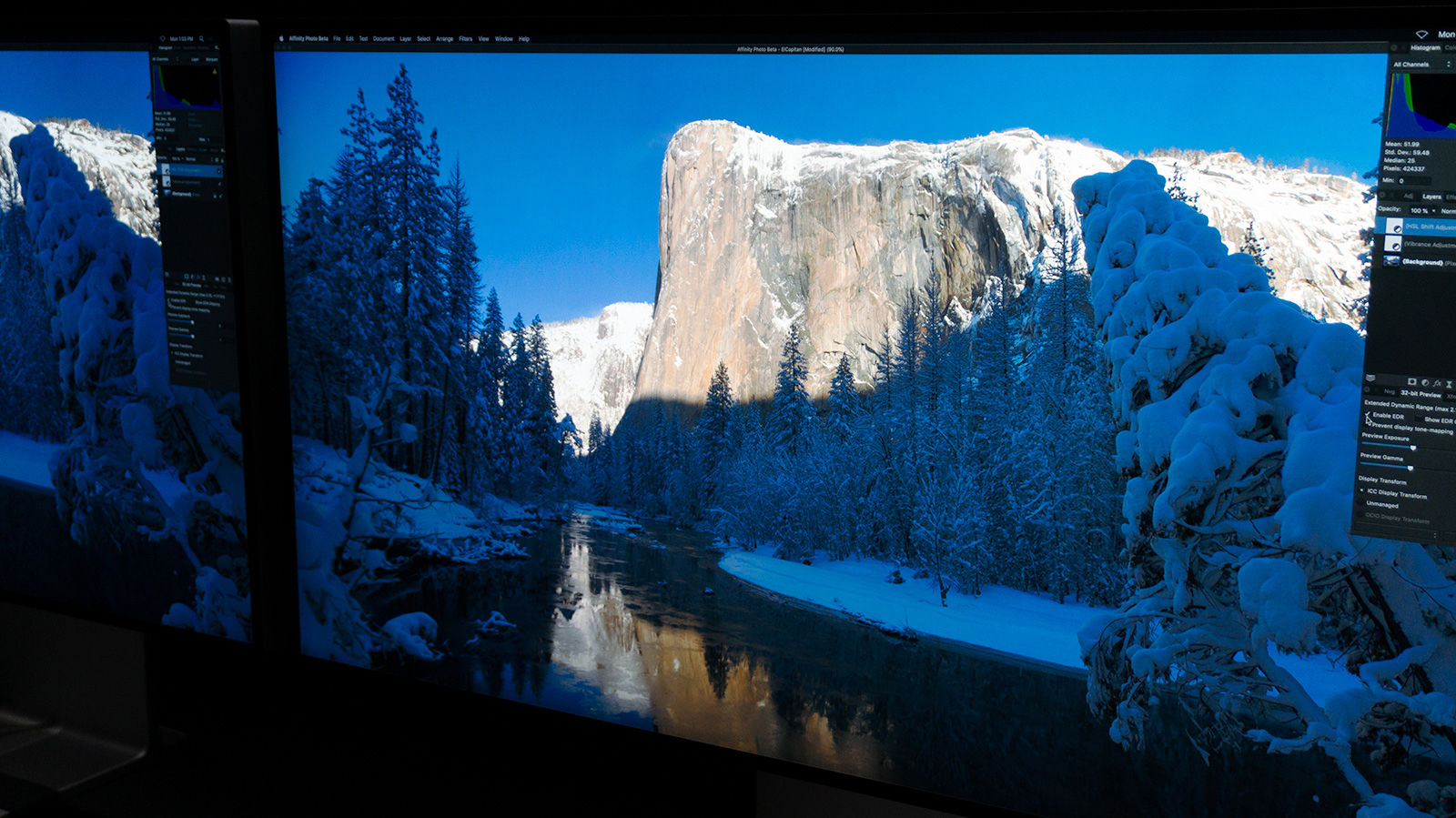 Apple says the standard model will give you “extremely low reflectivity”. But if you want to go beyond that – if you work in a brightly lit office, say – then paying an extra $1k for the nano-texture glass may be worth it.

This texture is etched into the glass at the nanometre level so you get the benefits of a matt surface without the associated and unwanted sparkle, but this is another element where we have to take Apple’s word for it until we can run more detailed tests.

We also have a first look at the Mac Pro here.