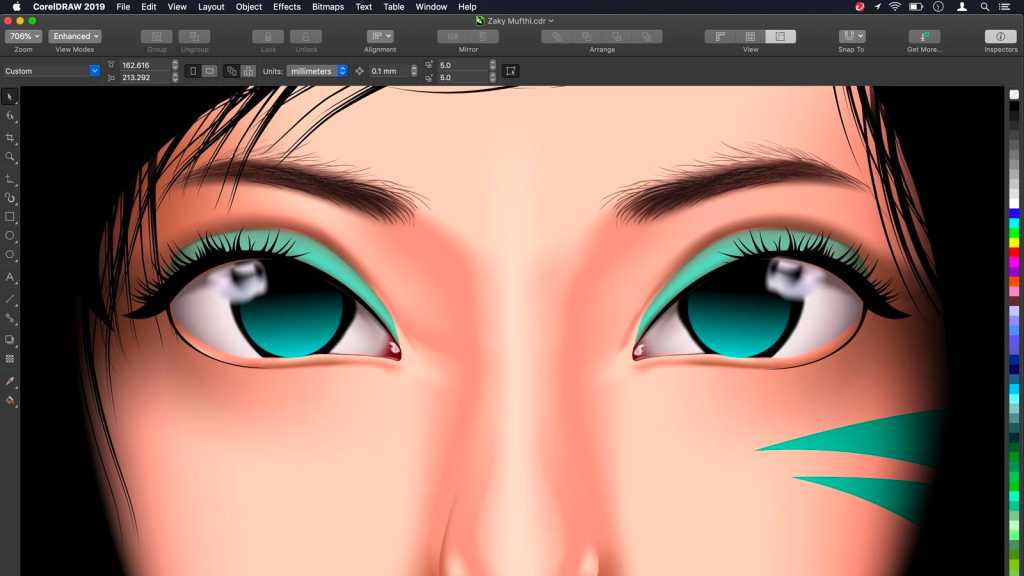 It’s good to see CorelDraw Graphics Suite back on the Mac. The main CorelDraw app is a genuinely attractive tool for professional-level vector graphics and illustration work, and Photo-Paint is a welcome bonus.

It’s almost 20 years since Corel last released a version of its CorelDraw vector graphics software for the Mac and, by its own admission, it didn’t do a particularly good job back then either. Still, better late than never, and CorelDraw Graphics Suite 2019 certainly looks and feels like a true Mac app, right down to the inclusion of Mac-specific features such as Mojave’s Dark Mode and support for the Touch Bar on the latest MacBook Pro models.

It’s also worth emphasising that this is indeed a ‘graphics suite’, rather than just a single app, as CorelDraw is accompanied by a Mac version of Corel’s Photo-Paint for photo-editing, and Font Manager, which will help you keep track of the large library of fonts that is included with the suite. There are also a number of additional utilities that are available from within the CorelDraw and Photo-Paint apps, such as AfterShot 3 HDR for working with RAW photo files, and PowerTrace for converting bitmap images into vector graphics. (Read Corel’s rundown of what’s included for more details.)

Plus, if you don’t want to clutter up your MacBook’s limited storage space, you get access to the online coreldraw.app, which gives you access to a more basic version of the app via a web browser interface when you’re on the move.

But is all this worth the price? In our CorelDraw Graphics Suite 2019 for Mac review we walk through the features and evaluate the suite’s depth and user-friendliness. For advice on the hardware side, read Best Mac for designers. 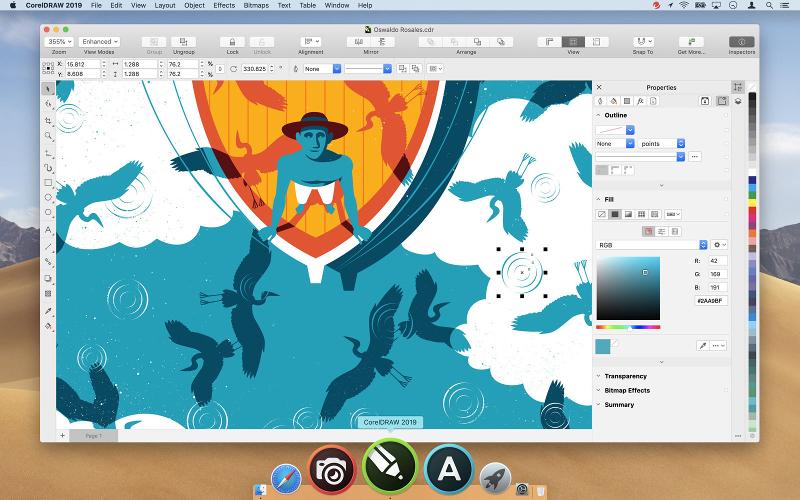 Deciding how you want to pay for the suite could be a bit complicated. If you’re not a fan of Adobe’s Creative Cloud subscription scheme then you’ll be pleased to hear that you can simply buy CorelDraw Graphics Suite 2019 outright for £599.99/$499.

That fee gives you a ‘perpetual licence’ to use the software for as long as you want, with no subscription fees required. However, it doesn’t guarantee access to any future upgrades – so there’s no guarantee that you’ll get a free upgrade if CorelDraw adds new features such as the Sidecar feature in Apple’s forthcoming macOS Catalina (which lets you use an iPad as a second screen). If you want guaranteed access to all future upgrades then you need to pay an annual ‘upgrade protection’ subscription fee of £109.99/$99 on top of the basic licence fee.

Alternatively, there’s a straightforward subscription-only option as well, which costs £199.99/$198 per year if you subscribe directly via the Corel website. That’s less expensive than Adobe’s subscription fees, which start at £20 per month for any single app, although you do need to sign up with Corel for a whole year.

You can, however, subscribe to just the main CorelDraw app on its own for one month at a time – for £19 per month – if you download it from the Mac App Store instead. That price doesn’t include Photo-Paint and the other extras found in the complete CorelDraw Suite, but it does at least give you the option of subscribing for shorter periods of time if you prefer.

The CorelDraw Suite isn’t really aimed at beginners – it’s pro software with a pro price – but it does a good job of helping out newcomers who might be trying to break their addiction to Adobe’s Creative Cloud apps. For starters, there’s that 7-day free trial that you can explore, and the app’s initial launch window includes a number of tutorial files that you can experiment with, along with hints, tips and online videos that help to introduce the key tools. 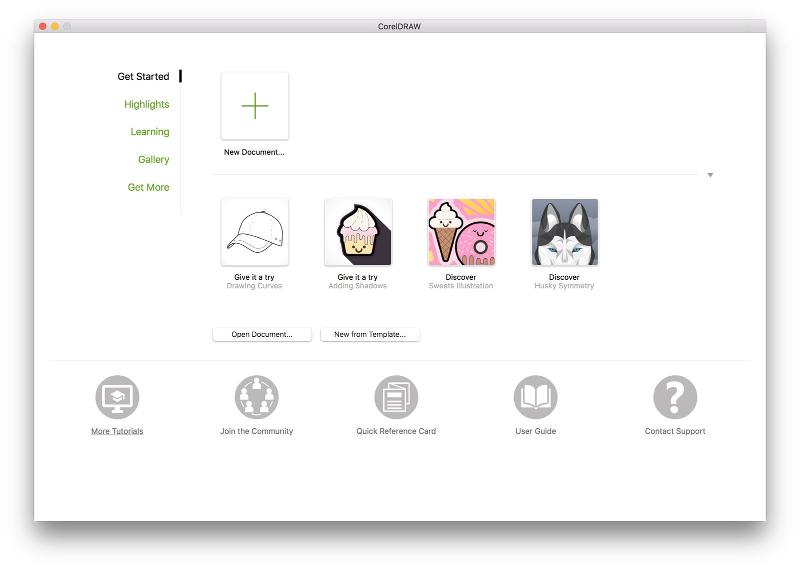 CorelDraw itself has a fairly conventional and familiar interface design, with a couple of toolbars running across the top of your document windows, and the main tool palette running down the lefthand side. However, the righthand side of the window holds the Inspector palette, which can be used to perform a number of different functions while you’re working (or hidden away if you don’t need it).

For newcomers, the Inspector can simply display hints on how to use the currently selected tool, but it can also provide very detailed controls for working with your illustrations. A key feature here is the Object Inspector – which is new to the Windows version of the suite as well – which displays a thumbnail visual preview of all objects and grouped-objects within a drawing, along with a name that you can edit, and a search tool for quickly locating and selecting individual objects, such as ‘blue petal’. 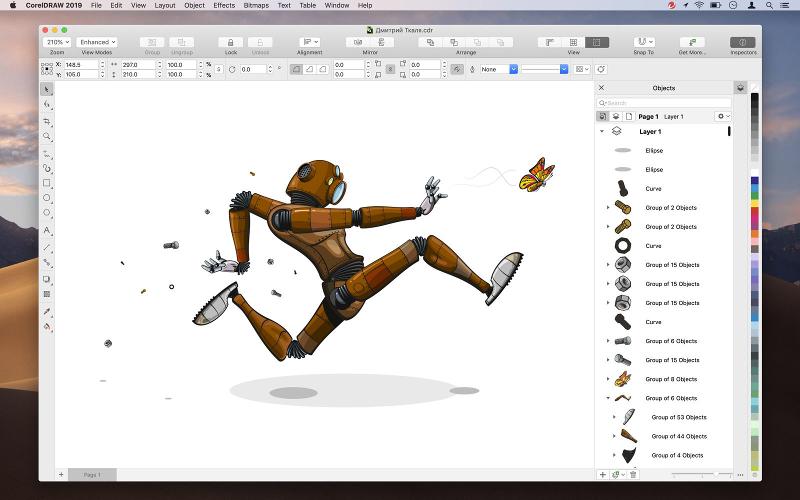 These effects are ‘non-destructive’, so they don’t permanently alter the original image. This allows you to apply multiple effects to an image, and then hide or show each effect individually in order to create several different versions of the same image.

This ability to combine bitmap and vector graphics also extends into the program’s drawing tools. As you’d expect, CorelDraw includes an extensive set of tools for creating vector graphics of various shapes. And, like many drawing programs, it also includes a freehand tool that lets you draw by hand and then converts your strokes into smooth vector graphics.

However, CorelDraw also includes a LiveSketch option that gives you a quick preview of how your drawing will look as vectors, but then gives you up to five seconds to touch in extra details before actually creating the final vector drawing. That gives the program a more natural feel when working with freehand drawings, and should be especially useful with a graphics tablet or stylus (or Sidecar with the Apple Pencil when Catalina arrives).

There’s a nod to good old-fashioned print magazines, with the ability to create multi-page layouts, while web designers can use the new Align To Pixel Grid command to precisely adjust graphics of any size. We also like the web-based templates that you can find in the online coreldraw.app, which includes templates for blogs and Facebook graphics, as well as templates for specific devices, such as the iPhone X, or iPad Air.

The other important component of the CorelDraw Graphics Suite is Photo-Paint, which, as the name suggests, provides tools for photo-editing and bitmap graphics. 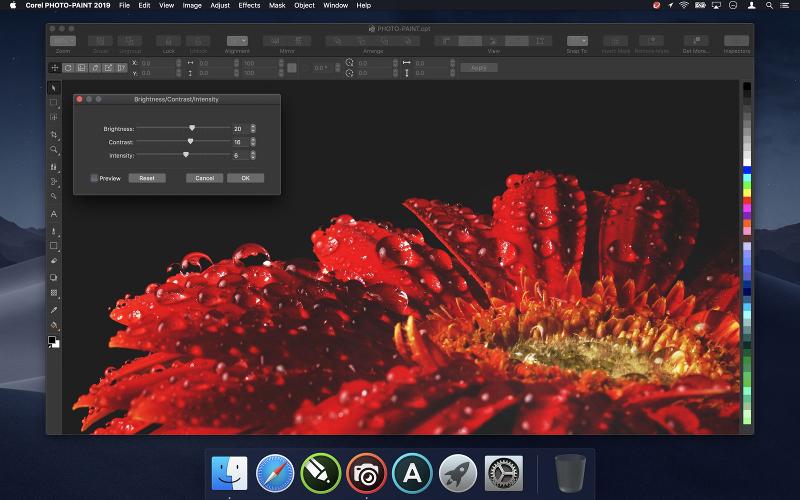 Photo-Paint is a bit of a mixed bag, though. It does include a wide variety of filter effects and colour controls for fine-tuning the appearance of your photos: there’s a Healing Clone tool for removing flaws and imperfections and a Smart Carver that can be used to edit out larger objects from an image, while we also like the Straighten Tool that provides useful options for altering perspective in your photos and correcting lens distortion. However, the program’s interface isn’t particularly elegant, and many of these features are simply dumped inside an endless series of menus and submenus.

The program also tends to use a fair bit of unfamiliar jargon – the ‘layers’ found in Photoshop and many other photo-editing programs are referred to as ‘lenses’ here, which sometimes made it difficult to find common tools simply because we didn’t know what they were called in Photo-Paint. The app’s Help system is fairly limited too, and it often just opens up a web browser and then leaves you to look through a bunch of FAQs on the Corel website.

It’s good to see the CorelDraw Graphics Suite 2019 back on the Mac – if only to provide a bit of competition for the traditional dominance of Adobe. This is a fully featured graphics suite with plenty of apps and utilities, plus access to the online coreldraw.app, and surprisingly user-friendly advice and tutorials for newcomers.

The main CorelDraw app is a genuinely attractive tool for professional-level vector graphics and illustration work, and while the menu-heavy Photo-Paint feels a little old-fashioned, it’s a welcome bonus that adds extra value and could save you quite a bit of money if you don’t want to sign up for Adobe’s Creative Cloud subscriptions.