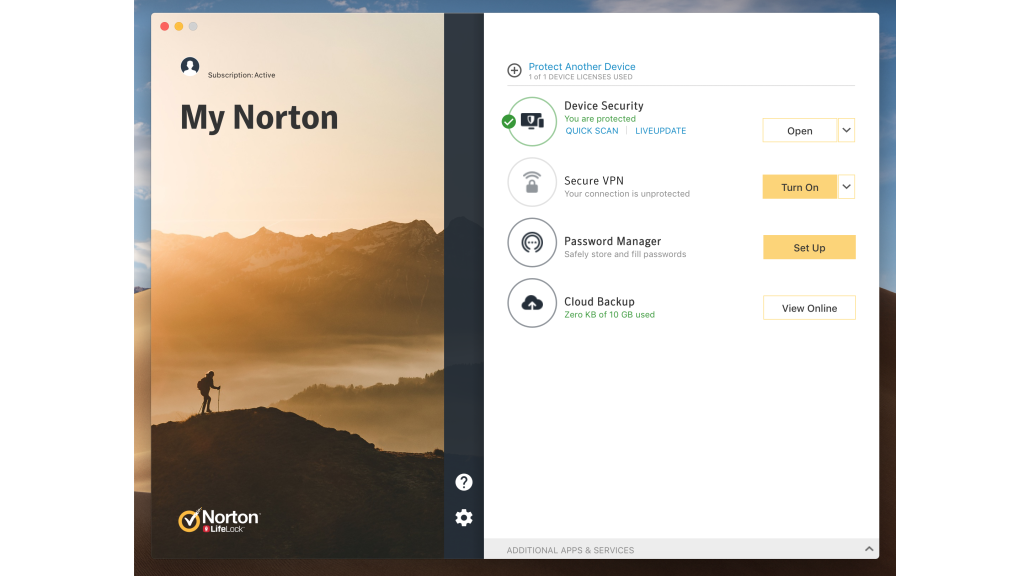 Norton 360 Standard offers more than just antivirus, with extra features including a VPN, a firewall and a clean-up app. The downsides include high prices after the first year and some features missing from the Mac app that Windows users will get for the same price.

We’ve reviewed Norton Security Standard for Mac in the past, and while that product is still available, you can get Norton 360 Standard for the same price – for the first year, anyway. So, we decided to take a look at the what Symantec refers to as “NEW Norton 360” – a completely new release for 2019.

The difference between this and the plain old antivirus package is that the former includes quite a lot more than just antivirus – although, as we’ll see, perhaps not quite as much as you might expect.

Don’t forget to check out our complete round-up of the best Mac antivirus you can buy. Norton 360 Standard ranks third.

If you want to cover more than one device, you can choose Norton 360 Deluxe or Premium, for 5 devices or 10 devices respectively. They also offer 50GB of PC Cloud backup or 75GB, while Standard gets you 10GB. Considering that’s useless on a Mac, though, it’s unlikely that’ll convince you to upgrade.

Following an easy installation, we ran our usual battery of unscientific tests that we hope indicate how well Norton 360 performs relative to other antimalware apps. The first was to perform a full system scan on our test MacBook Pro, with its i7 2.8GHz processor, 16GB of RAM, and around 400GB of files.

The scan completed in just 35 minutes, which makes Norton 360 one of the fastest antimalware scanners that we’ve seen. CPU usage throughout was around 50-80% of four of the CPU cores in our Mac, so we were paying a price for that speed and the fans became noisy.

A second full system scan later took the same amount of time to complete, and it looks like Norton 360 doesn’t include the functionality to know which files haven’t changed, and that therefore don’t need scanning afresh – a trick other antimalware apps use to speed-up subsequent scans.

Next, we switched to our virtualised macOS installation to test how Norton 360 coped when we introduced 26 recent Mac malware samples onto the computer. The result was a 100% clean-up rate. Only a handful of the antimalware apps we’ve looked at got a similar top score.

The malware was detected near-instantly, with a relatively informative pop-up notification appearing telling us where and when the malware appeared.

Included in the price is a VPN app, intended to protect your internet communications when you’re on untrusted WiFi, such as that at a café or hotel. Although effective, this is also comparatively rudimentary, in that you can’t choose the end-point. Users simply turn it on, or turn it off. However, it’s appears to have unlimited data downloads, unlike with the VPN offerings bundled with other antimalware apps we’ve seen that peg the user to 200 or 300MB.

You also get an outgoing firewall app, that blocks apps accessing the Internet unless they’re authorised. This is designed to block malware from “phoning home” with your data, or to receive instructions.

The firewall went far beyond similar offerings, such as including location awareness that can change the rules depending on whether you’re on a trusted and untrusted network (e.g. at home), and also automatic blocking of known malware servers and types of malware connections. It’s a powerful tool.

Norton Clean does exactly what you’d expect, which is to attempt to create space on your disk by cleaning away duplicate and junk files (such as old temporary data). This is extremely easy to use.

Additionally, there are a handful of useful browser plugins – a cloud-based password manager, and Norton Safe Search and Safe Web, both of which aim to protect the user while browsing should they stray onto any unsafe sites.

Notably, the firewall and Norton Clean tools are somewhat hidden. By default Norton 360 on the Mac shows an attractive user interface by which you can do most things. However, you must click the settings button to switch to the older Norton Security app in order to access the firewall and Norton Clean tools. It’s a little messy but it works so long as you remember what to do.

What you don’t get

Notably missing from Norton 360 is any kind of active anti-ransomware protection – although Norton 360 will, of course, detect and eradicate any known ransomware malware that gets onto the system.

The kind of protection we’re talking about is found in some antimalware apps and blocks writing to certain of the user’s home directories. Only authorised apps like Microsoft Word or Apple’s Photos app are allowed to use the folders. This blocks any ransomware that somehow gets through and infects the system.

There’s also a long list of features that only Microsoft Windows users get as part of the yearly subscription. Mac users don’t get the webcam protection, for example. Nor do Mac users get the parental control features.

And while your Norton 360 subscription gets you either 2 or 10GB of cloud backup space, there’s no Mac software to make use of it (unless you’re running a very, very old version of macOS).

This is where we would insert a frowning emoji, if we didn’t eschew such things in our reviews.

We started out liking what we saw with Norton 360 Standard but the missing Windows-only features and somewhat aggressive pricing following the first year’s offer sadly wiped the smile from our faces. It’s still a reasonably good deal but we have to deduct points for any product that treats Mac users like second-class citizens.

We hope the Mac version catches-up to the Windows version soon. Once that happens Norton 360 Standard will be a very attractive proposition.