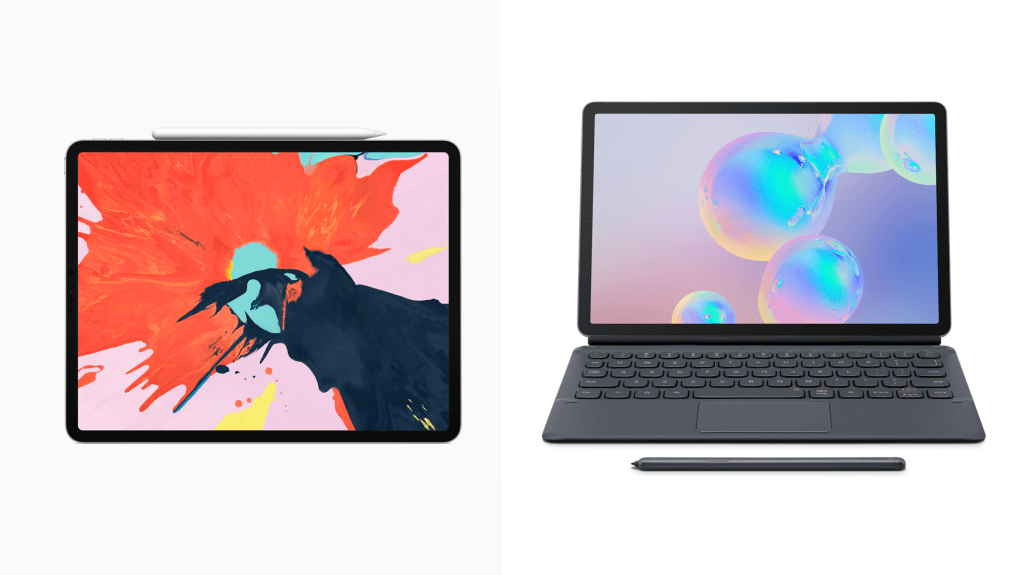 The Samsung Tab S6 is an excellent tablet, and we particularly like the inclusion of the S-Pen in the box rather than as an expensive extra item to add to the bill. The hardware gives both iPad Pros a run for their money in many areas, but the classic Achilles heel of software remains an issue. iPad owners are well aware of how polished the experience is on iOS, but Android is still quite a distance behind in terms of optimised apps. All are capable devices, but the iPad Pro remain the king of the hill, for now.

When it comes to tablets, Apple pretty much has the market sewn up with its all-conquering iPad range. Aside from the cheap Amazon Fire models or Microsoft’s Windows 10-powered Surface Pro 6, there’s little to threaten the iPad’s dominance.

One company that does have the clout and expertise to make a grab for the crown, however, is Samsung, and with its new Tab S6 device there’s plenty to tempt consumers away from the safe harbour of iOS. In this article we compare the iPad Pro and Samsung Tab S6 to see how the best of Android compares to Apple’s premium offering.

Apple updated its iPad Pro lineup in October 2018, introducing two new models: iPad Pro 11in and iPad Pro 12.9in, both with Wi-Fi or Wi-Fi + Cellular options.

They come in the following range of storage configurations:

All can be bought directly from Apple or at retailers such as John Lewis, Currys/PC World, and Amazon.

Samsung announced its new Tab S6 on 31 July 2019, with a release date of 6 September for the Wi-Fi model. The LTE one is still to be confirmed at the time of writing, but hopefully this will be revealed soon. Pre-orders from the Wi-Fi models will open on the Samsung website on 23 August.

There are two variants in the range, priced as follows:

Obviously, there will also be LTE models with the same capacities but, as with the release dates, prices are currently unknown.

Samsung has refined the design of the Tab S4 with its updated model. The angular construction is similar to that of the iPad Pro, but its dimensions make it slimmer and lighter than its predecessor as well as Apple’s tablets. 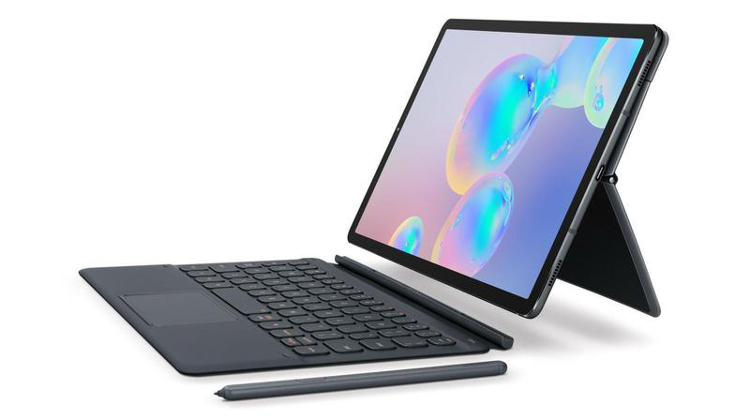 The iPad Pro offers two different screen sizes (11in and 12.9in) using the standard 4:3 aspect ratio that we’ve grown so accustomed to over the years, while the Samsung Tab S6 comes in a solitary 10.5in model with a 16:10 ratio.

Both manufacturers fit four speakers in each device, a USB-C port, and no 3.5mm headphone jacks (when will this madness ever end?). Smart connectors or variants thereof are standard, allowing the available keyboard covers to attach without issue.

One area where the Tab S6 gets ahead of the iPad Pros is with its S-Pen. Samsung has crafted a grove on the back of the tablet that not only allows the stylus to attach magnetically, but also charges the accessory when stored there. The S-Pen is also included in the box, unlike Apple’s Pencil, which costs an additional £119/$129. 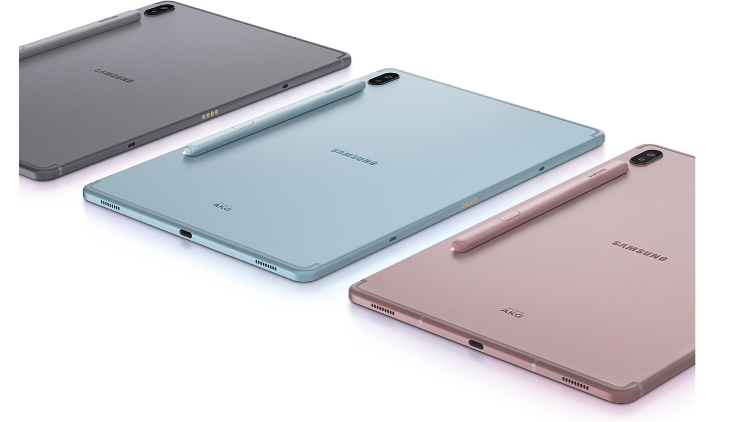 The Tab S6 is available in Rose Blush, Mountain Grey, and Blue (not in the UK), while Apple’s liveries are silver and Space Grey.

The Tab S6’s 10.5in (2,560×1,600 resolution) Super AMOLED panel is almost the same one as on the Tab S4, albeit with slimmer bezels and an optical fingerprint scanner embedded in the display.

Apple opts for a 2388 x 1688 resolution panel in the 11in model and 2732 x 2048 on its 12.9in sibling. These both come with ProMotion technology for ultra-smooth scrolling, Wide colour display (P3) technology, and True Tone displays that monitor the colour temperature in a room and match accordingly. There’s no Home button or embedded fingerprint sensor, as Apple prefers Face ID to unlock the Pros. 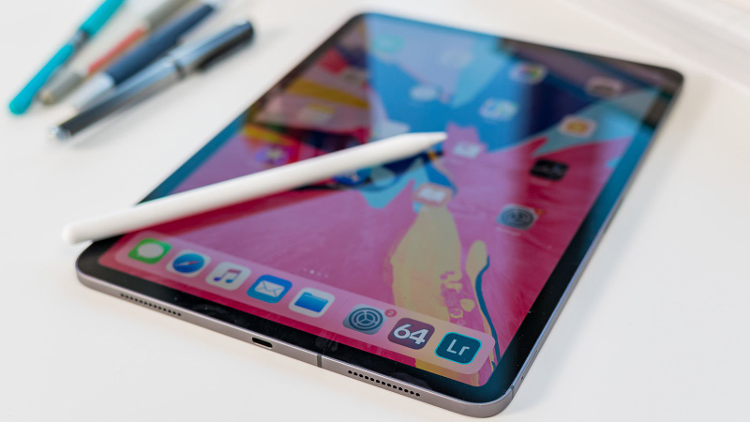 Processors in all the devices are high-end, with Samsung including the latest Qualcomm Snapdragon 855 chip, while the iPad Pros share Apple’s own A12X Bionic chip. We expect top performance from all of the contenders, with the A12X already acquitting itself admirably in our tests.

Aside from the displays, both iPad Pros share identical hardware, including a single 12MP f/1.8 aperture camera on the rear that offers Smart HDR, auto image stabilisation, and video that tops out at 4K @ 60fps.

Samsung goes one better with dual optics comprised of a 13Mp main lens and a 5Mp ultra-wide camera. The front shooter is also a step-up with its 8Mp sensor as opposed to the 7Mp True Depth camera on the Pros.

Here’s a breakdown of the technical specifications for all the devices.

iOS 12 is the order of the day on the Pros, bringing with it several iPad specific updates that move the devices closer to the laptop replacement that Apple seems to be heading towards. Apple recently announced that iPadOS will replace iOS from September 2019, making the operating system even more focussed on getting the most from the impressive hardware.

Android 9.0 with Samsung’s One UI overlay is the OS of choice for the Tab S6. This is enhanced by the DeX technology that allows a desktop-style experience, replete with mouse controls and external monitors. 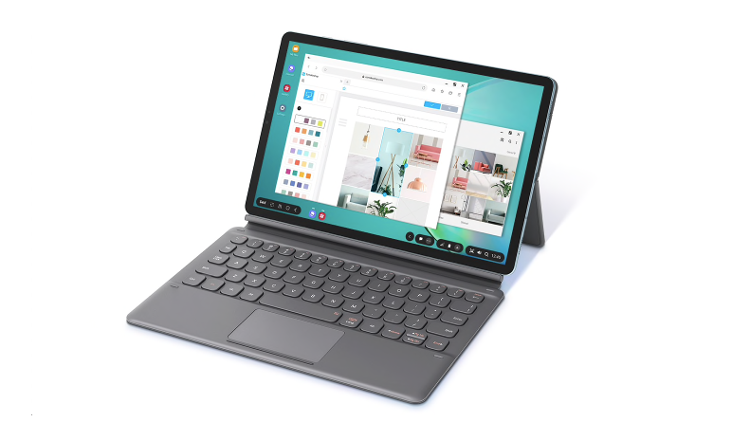 While both are mature and powerful systems, the app catalogue for the iPad Pros gives them a huge advantage over Samsung’s offering. Android may have a huge amount of games, utilities, and other useful apps, but most are still not optimised for the larger tablet devices, unlike on iOS.

Samsung has made solid advances with its tablets in recent years. The Tab S6 does nothing to impede this progress, with a smart design, powerful hardware and the welcomed inclusion of the S-Pen in the box. Its DeX interface brings a desktop-style experience when paired with an external monitor, keyboard and mouse, so if you want a 2-in-1 then it’s worth a look.

Those who prefer the ultimate tablet experience will enjoy what the iPad Pro has to offer. They are hugely powerful devices, backed by the best software you’ll find on this format. The Samsung is very good, but the iPad Pros remain the ones to buy.