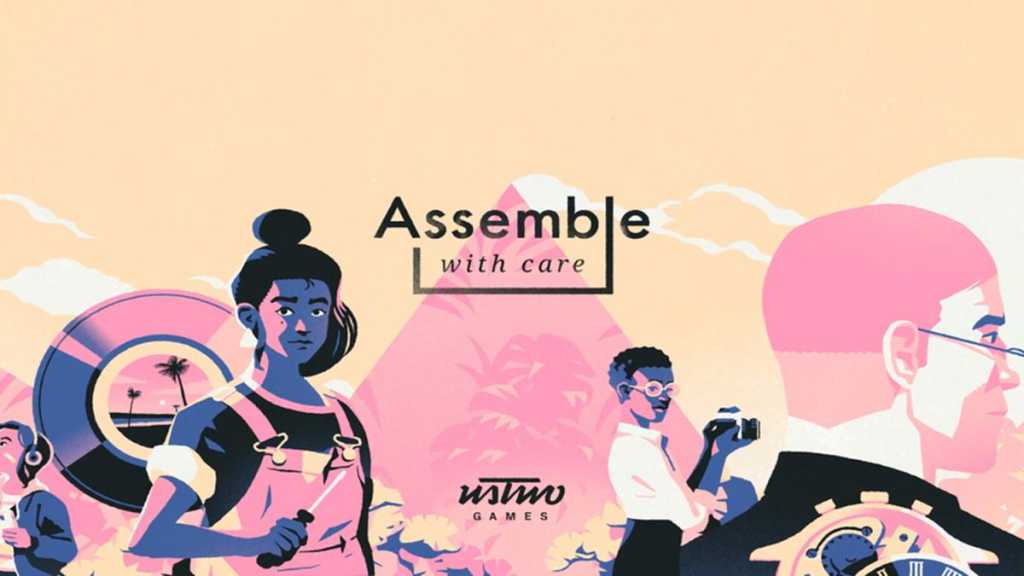 Short and sweet. The puzzles in Assemble With Care are a relaxing, evocative delight, the writing and voice acting are excellent, and the visuals are both unusual and beautiful. The stories are sometimes poignant and sometimes a little heavy-handed, but this remains a courageous and unusual project.

Included as part of Apple Arcade

Ustwo Games, famous for making an iOS game so successful that it was featured in House of Cards, has come back with an encore. And the company has taken a bit of a risk, because it’s different to its famous predecessor in a number of ways.

Not in every way, mind you. Like Monument Valley, Assemble With Care is a tactile, visually satisfying puzzle game in which you manipulate and ‘solve’ objects: in this case the items brought by the citizens of Bellariva to the workshop of Maria, an antiques restorer who recently arrived there for a working holiday. As Maria, you’ll take delivery of an item (watch, music box, camera) that isn’t working, and then undo screws, lift off panels, apply glue, replace batteries and rearrange wiring until it is.

A little reminiscent of sections in the Room games, this is a beautifully chill and zen experience, and one you’ll probably want to indulge thoroughly. We especially enjoyed the initial exploratory phase, where you first pick up the object and rotate it to view from all angles: what’s amiss here, you wonder. The items themselves are lovingly recreated – idealised, rose-tinted memories of themselves, rather than photorealistic diagrams – and restoring them with swipes and taps is a pleasure and an escape.

Also like Monument Valley – and this is where some readers may be less pleased – Assemble With Care is, quite deliberately, a brief game. There are just 13 objects (two of which, without wishing to spoil the story, won’t tax the brain whatsoever) and we finished it in around an hour and a half. There’s no disguising that this is both a short and an easy game.

It’s good to be transparent about this sort of thing, and if you have a minimum level of difficulty, or if length is a dealbreaker for you, this won’t tick those particular boxes. But we believe there is a place for games that are charmingly gentle, and love those that are small and perfectly formed. Indeed, we find the padding and grinding deployed by so many AAA games to be profoundly dull.

Instead, like its predecessor, Assemble With Care contains absolutely no filler and never outstays its welcome. It is exactly as long as it needs to be. And of course – despite the makers’ assurance that the game was conceived long before Apple Arcade was, and that the studio would have made it this way regardless – the fact that it’s contained within that umbrella service’s single monthly fee means “how many hours am I getting for my money?” is less of a pertinent question.

So far this all probably sounds like more of the same, albeit in a good way. But the major difference in approach concerns the story.

In Monument Valley there was clearly something going on story-wise, but it was mysterious, and never really explained. What was the significance of the totem poles? We have no idea, even now, and this didn’t affect our enjoyment of the game. By contrast, Assemble With Care brings story to the fore and makes it a key component.

Those objects, you see, are much more than just McGuffins that unlock the next level. They have personal significance to the people who own them, and set off emotional responses in the player too – not least because, the game being set in 1989, they are hugely evocative. The level where you repair and then very briefly play a Game Boy-style handheld gave us a Proustian rush (the music!), and we suspect other players will experience similar moments.

As you get to know the people in the town, and repair their gadgets, you learn their backstories. Ustwo decided to whittle down what was initially conceived to be a more extensive cast in order to focus on the relationships between just four characters: the sisters Carmen and Helena, and the father and daughter Joseph and Izzy.

Some of this information is integrated into the puzzle gameplay itself. In repairing Carmen’s slide projector, for example, you happen across photos of the sisters as young girls; a tape player offers a recording of Izzy’s late mother. And when this is handled gently – as it often is – it can be immensely affecting.

But we wish a light touch could have been maintained throughout. Sadly, the developers occasionally feel the need to labour the point. One item, for example, is engraved with a poignant message whose significance is fairly obvious, and the moment lands without further explanation – yet it then is explained, in a way that feels unnecessary.

Much of what you learn, in fact, is not found by item exploration at all, but by the people you meet being implausibly forthcoming to a stranger who is fixing their stuff, in the style of a single-scene RPG character. And the stories, particularly towards the end, tend towards simple and cheerful resolution: despite the game observing at one point that the father-daughter relationship won’t become perfect overnight, the abiding impression it leaves is that quite to the contrary, Maria has fixed Joseph and Izzy’s home life just as deftly as she mended their homeware.

The puzzles in Assemble With Care are a relaxing, evocative delight, and (provided players are forewarned) we have no problem with the ease and rapidity with which they will be solved: it’s short and sweet. We also found the writing to be of a high standard, the voice acting excellent, and the visuals both unusual and beautiful.

The story side of things is less consistent. Sometimes it’s poignant; sometimes it veers towards the heavy-handed. Either way, we think it’s courageous (particularly given how easily Ustwo could have fallen back on ‘Monument Valley In Space’) for a game to centre on such a small and human canvas. It’s to be hoped that Apple Arcade will make it easier for projects like this to be made.

For more gems from the new service, read our roundup of the best games on Apple Arcade.