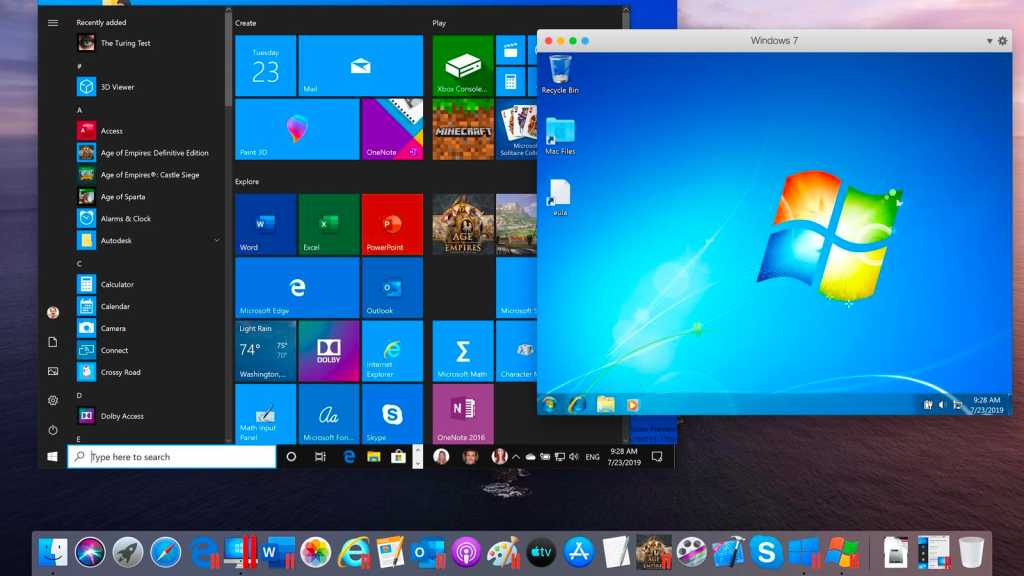 Parallels Desktop 15 adds support for Metal and Windows DirectX 11, which allows it to run a wider range of graphics software than most of its rivals, and for new Catalina features such as Sidecar. If you need to run Mac and Windows apps side by side then Parallels is still the leader of the pack.

Apple’s Boot Camp is a good solution if you need to run Windows apps or games on your Mac, but it does have limitations. The main problem is simply that you have to shut down the Mac side of things completely and then reboot your Mac into Windows – which means that you lose access to Mac apps and features, such as Apple Mail or the cool new Sidecar feature that works with iPads.

For many people, virtualisation software such as Parallels Desktop is a more elegant and convenient solution, as it allows you to create a ‘virtual machine’ (VM) that runs Windows as though it were simply another Mac app. This allows you to run Mac and Windows apps side-by-side at the same time, so you’re not forced to switch between Mac and Windows as you are when using Boot Camp.

The disadvantage of this approach is that you’re effectively running two operating systems on your Mac at the same time, so you need plenty of memory, disk space and – above all – processor power in order to run your virtual machines efficiently. Fortunately, modern multi-core processors can run routine apps such as the Windows versions of Microsoft Word or Excel using virtualisation with no trouble at all. And if you’ve got a decent graphics card – or maybe an eGPU that can give your Mac a graphics boost – you can even run quite demanding graphics and design software that would normally only be available for Windows PCs.

A regular cycle of annual updates – that generally coincide with updates to macOS itself – has allowed Parallels Desktop to rule the roost in the Mac virtualisation market in recent years. However, we’ll admit we were a bit worried when we heard that Parallels had been taken over by Corel at the end of last year. After all, Corel hasn’t had a great record of supporting the Mac over the years – although its recent release of CorelDraw for the Mac after a gap of almost 20 years did at least suggest the company hadn’t forgotten about Mac users altogether. And, rather than simply submerging Parallels Desktop within the labyrinthine depths of Corel’s own website, Parallels continues to maintain its own identity, and its own website at parallels.com.

With its main rival, VMWare Fusion, apparently skipping any major update this year, that gives the new Parallels Desktop 15 a good opportunity to reinforce its position as the leading virtualisation tool for Mac users who need to run Windows software. 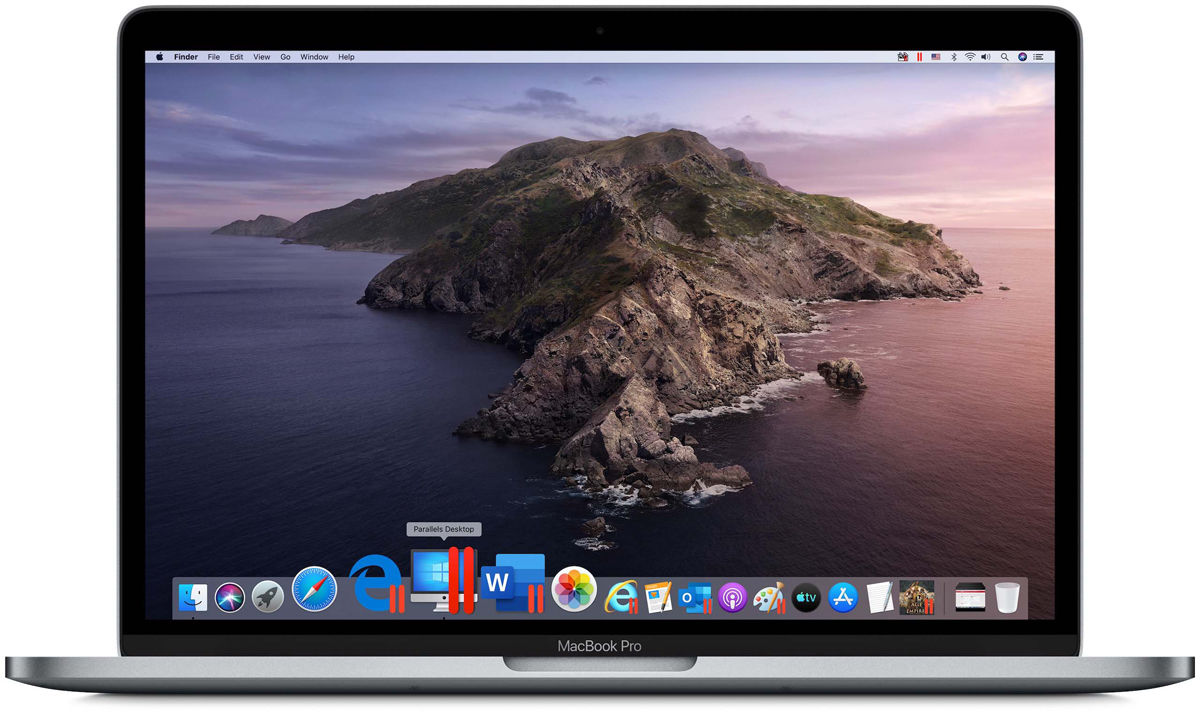 As always, Parallels Desktop is available in three different versions. The standard version of Parallels Desktop is designed for home users or students who simply need to run Windows apps every now and then (and maybe even the occasional Windows game as well). That requires a one-off payment of £69.99/$79.99 for a single-user licence, while existing users can upgrade to v15 for £39.99/$49.99.

There are also Pro and Business Editions available, although these both require an annual subscription of £79.99/$99.99, which has to be renewed every 12 months if you want to keep using the software. However, the subscription fee does include upgrades for all future versions of the software, as well as technical support for the whole year (the standard version only gets 30 days).

The Pro Edition includes additional features for developers who want to test and debug their applications, with features such as support for Microsoft Visual Studio. The Business Edition includes all the same features as the Pro Edition, along with a number of admin and maintenance tools for businesses and organisations that have multiple Parallels users.

You can view all the versions of Desktop 15, and buy online, on Parallels’ website.

Those prices also include a copy of Parallels Toolbox, which is a handy suite of tools and utilities that run on both Mac and Windows. And, for iOS and Android mobile devices, you get the Parallels Access app, which provides remote control of your Mac from any location that has (fairly fast) Wi-Fi.

Parallels always times its updates to coincide with new versions of macOS, and now that Catalina has been officially launched we can expect ‘Update 1’ for Parallels Desktop 15.

Update 1 will provide official support for new features in Catalina, such as Sidecar, which will allow you to move your Windows VM across on to the screen of an iPad so that the iPad acts as a separate display just for your Windows apps (we’ve tested this feature with the beta version of Catalina, and it was fine). You can even use an Apple Pencil with your Windows apps, and the Touch Bar option provided by Sidecar (found in System Preferences on your Mac) will allow you to switch the Pencil between pen, eraser and mouse modes, so you can use the Pencil like a mouse to control apps, or just as a stylus for drawing and sketching.

But if you’re really interested in graphics and design apps then the most important new feature in Parallels Desktop 15 is its support for 3D graphics in Windows using Microsoft DirectX 11. Previous versions of Parallels Desktop did support DirectX 9 and 10, but some important graphics software, such as AutoDesk 3DS Max, will only run with DirectX 11, so you can now run AutoDesk and other apps on a Windows VM for the first time. 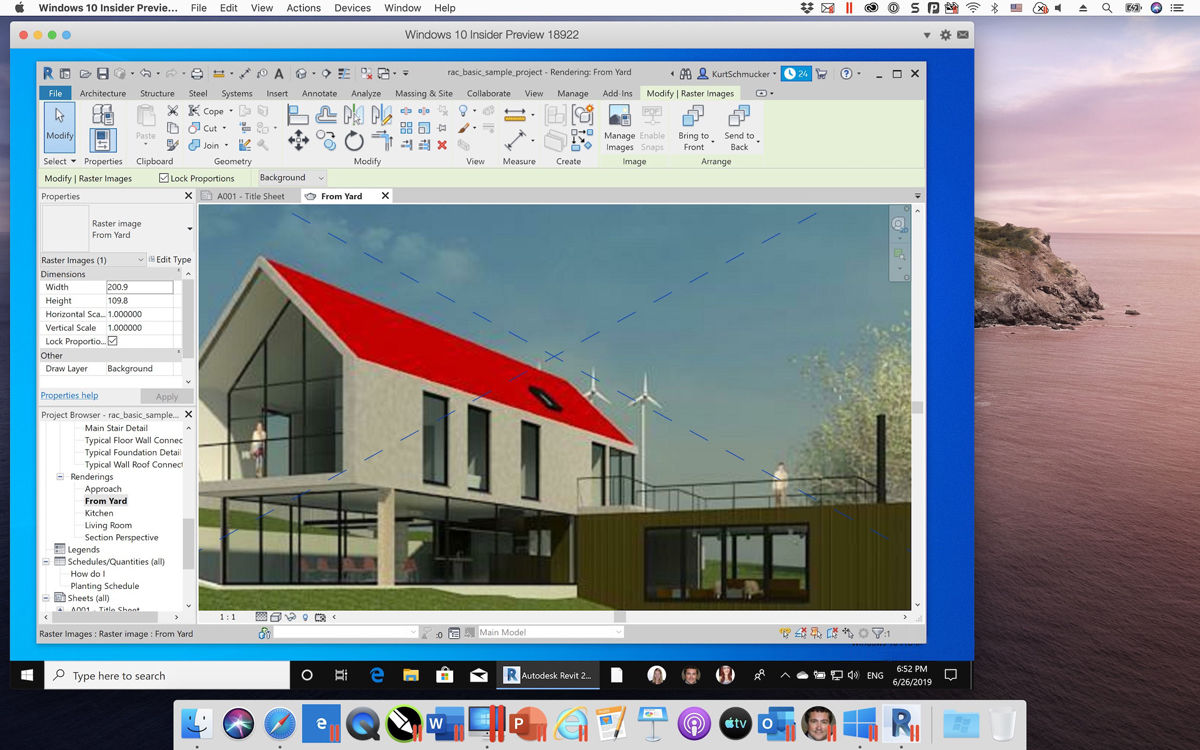 Parallels also says its support for Apple’s Metal graphics system improves performance for 3D graphics and games by around 15%. However, you’ll need to be running Mojave or Catalina in order to get the full benefits of these graphics improvements.

Running any 3D graphics or games software in a virtual machine needs a fairly powerful graphics card, and there are still many Macs – including some quite expensive MacBook Pro models – that still rely on less powerful integrated graphics. But if your Mac has a Thunderbolt 3 interface, Parallels tells us that it is actually possible to connect the Mac to an eGPU – external GPU – so that your Windows virtual machine can use a more powerful graphics card to boost performance for Windows games and graphics software.

There are a number of other improvements in Parallels Desktop 15. For one thing, it works better with the new system of screenshot previews that was introduced with Mojave last year. You can now drag and drop the preview of a screenshot straight on to the Windows desktop, as well as dragging and dropping photos and other images from Mac apps, such as Safari, into Windows.

And if you Control-Click on any file on your Mac, you’ll see a new option on the Share menu that allows you to open your Windows email program – either Microsoft Outlook or any other email app – and automatically create a new message with that file attached. That’ll be a real time-saver for many business users who run the Windows version of Microsoft Office, and Parallels also says it has fine-tuned performance so that Office for Windows apps launch as much as 80% faster than before. 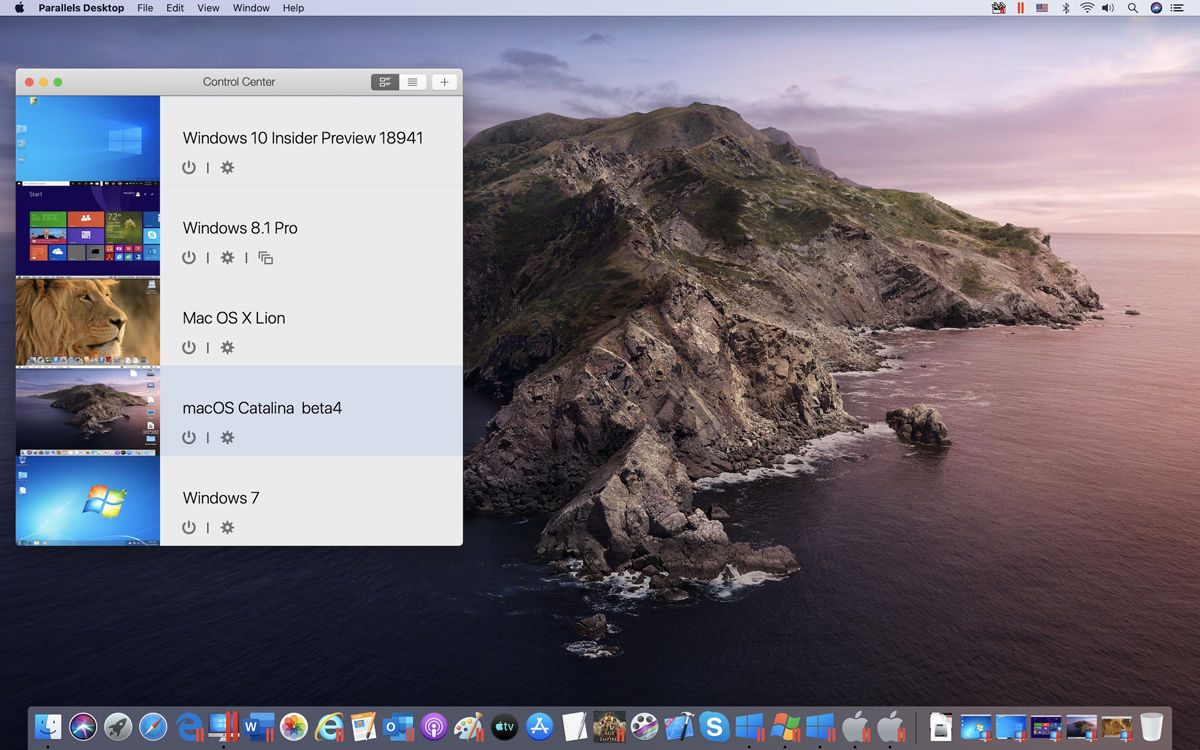 One other area where Parallels Desktop – as well as rivals such as VMware Fusion – has an advantage over using Boot Camp, is that they allow you to create virtual machines running many different versions of Windows, and other operating systems too.

The current version of Boot Camp only supports Windows 10, so if you’re not a fan of Windows 10, or you don’t want to buy a new licence for Windows 10, then Parallels Desktop will allow you to create a VM using older versions of Windows, going right back to Windows 3.1, and even the pre-Windows MS-DOS. Developers can also create VMs that run several different versions of Linux, and even Android or Chrome too.

You can also create virtual machines that run macOS itself. New operating systems always have a few bugs to iron out, so if you don’t want to commit yourself to the new Catalina just yet then you could run Catalina in a VM until you’re ready to make the switch. And, of course, Catalina will no longer run older 32-bit software, so if you rely on any important apps that are still 32-bit – like my old copy of Microsoft Office 2011 – then you have the option of creating a VM that runs Mojave or other old versions of macOS, so that you can keep using your old software. 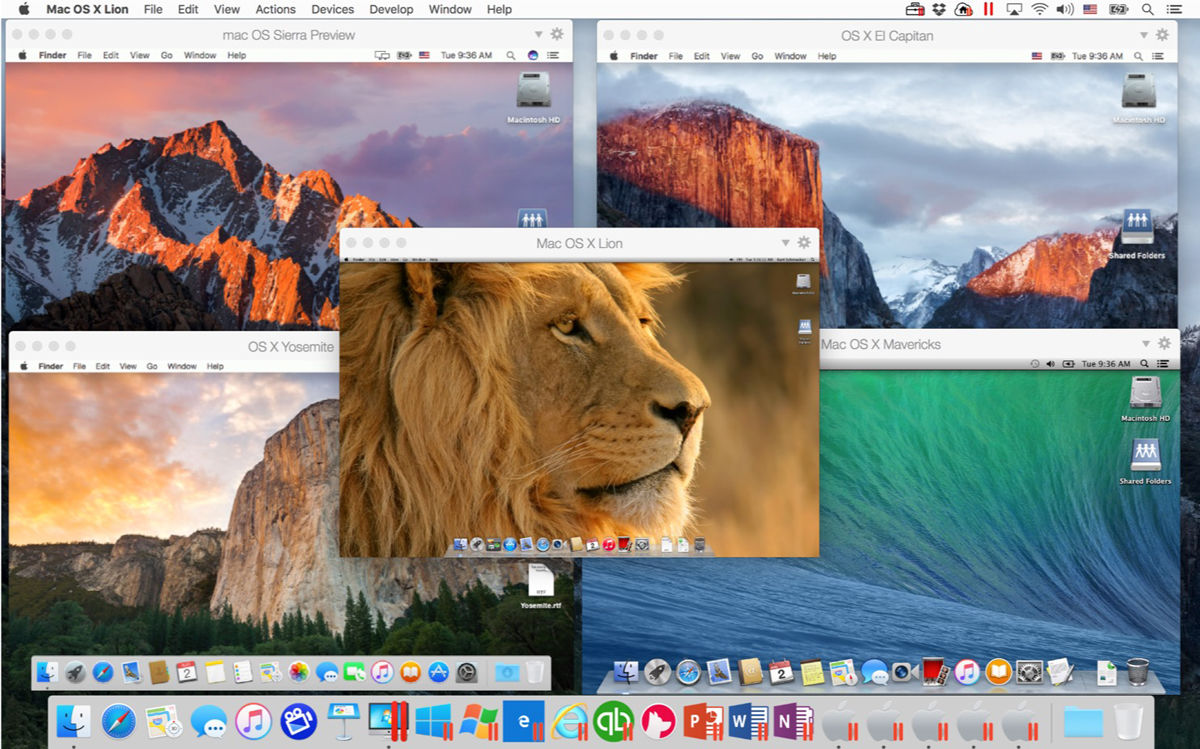 There are a number of rival virtualisation programs such as Fusion and VirtualBox, which allow you to run Windows on your Mac as a virtual machine, but the great strength of Parallels Desktop has always been its smooth integration of the Mac and Windows environments. That trend continues with Parallels Desktop 15, with elegant features such as support for Sidecar in Catalina.

This update also provides significant performance improvements, thanks to its support for Apple’s Metal and Windows DirectX 11, which allow it to run a wider range of graphics software than most of its rivals. Boot Camp will always provide better performance for running Windows games and software, but if you do need to run Mac and Windows apps side by side then Parallels Desktop is still the leader of the pack.

For our advice on all the options out there, read our roundup of the best virtual machine software for Mac.