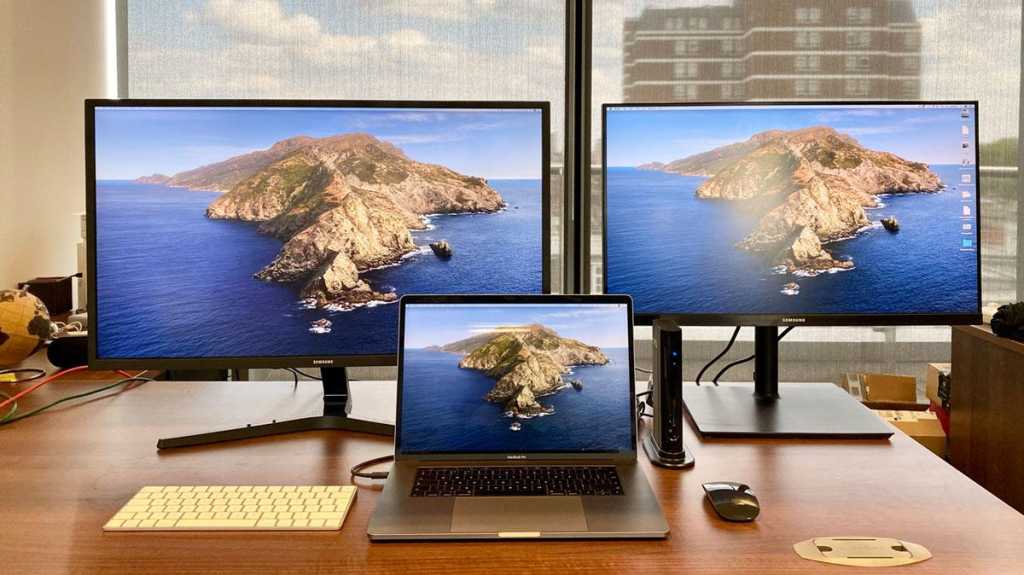 Plugable’s Thunderbolt 3 Dock (TBT3-UDV) is a capable dual-display Thunderbolt 3 docking station that will delight many with its ability to stand upright or lie horizontally.

Docking stations add a bunch of ports to laptops that often have just one or more USB-C or Thunderbolt 3 ports – giving you the ability to add one or more external displays, Ethernet wired Internet access, and old-style USB-A devices.

TB3 laptops can use USB-C docks, but they will lose most of their bandwidth advantage by doing so – dipping from 40Gbps to as low as 5Gbps.

Plugable’s Thunderbolt 3 Dock (TBT3-UDV) is a good-looking, tall and slender 40Gbps dock when sitting upright in its weighty stand, or slim when lying horizontally. We like the fact that you can orient it in the way that suits your desk setup.

All of Apple’s Thunderbolt 3 MacBooks – MacBook Pro 2016 or later and MacBook Air 2018 or later – work with this dock, and can use it to connect one or two external displays.

The dock has one DisplayPort (a DisplayPort-to-HDMI adapter is included), and also a second Thunderbolt 3 (TB3) port that can be used with an adapter for HDMI, DVI or VGA displays.

The number of USB-A ports is generous, but only the front-facing one supports BC 1.2 charging for phones.

The four at the back are really or data only but do offer 5W power, and are a little close together, which can mean some memory sticks will block the other ports. It’s no problem when connecting devices via a USB cable.

The same would be true of connecting some card readers, which is a shame as there’s no SD or Micro SD Card reader included on this dock. These can be handy for adding inexpensive and portable backup storage.

These larger laptops will be charged by the dock, but slower than they would be using their supplied wall charger. However, if you are really pushing a larger Pro’s workload, it’s possible the 60W input might not be enough to keep the laptop charged all day – but it should be fine for most.

If you want a docking station with more power, consider Caldigit’s 87W TS3 Plus or see our roundup of the best Thunderbolt 3 docking stations for MacBooks.

The TS3 Plus also has five USB-A ports, plus two T3, two USB-C, DisplayPort, Gigabit Ethernet, and an SD Card reader for around the same price, so beats the TBT3-UDV on features as well as power.

Plugable’s Thunderbolt 3 Dock (TBT3-UDV) is a capable dual-display Thunderbolt 3 docking station that will delight many with its ability to stand upright or lie horizontally.

At 60W, it’s a little underpowered for Apple’s larger 15in and 16in MacBook Pro laptops, but fine for the 13in MacBook Pro or Air.