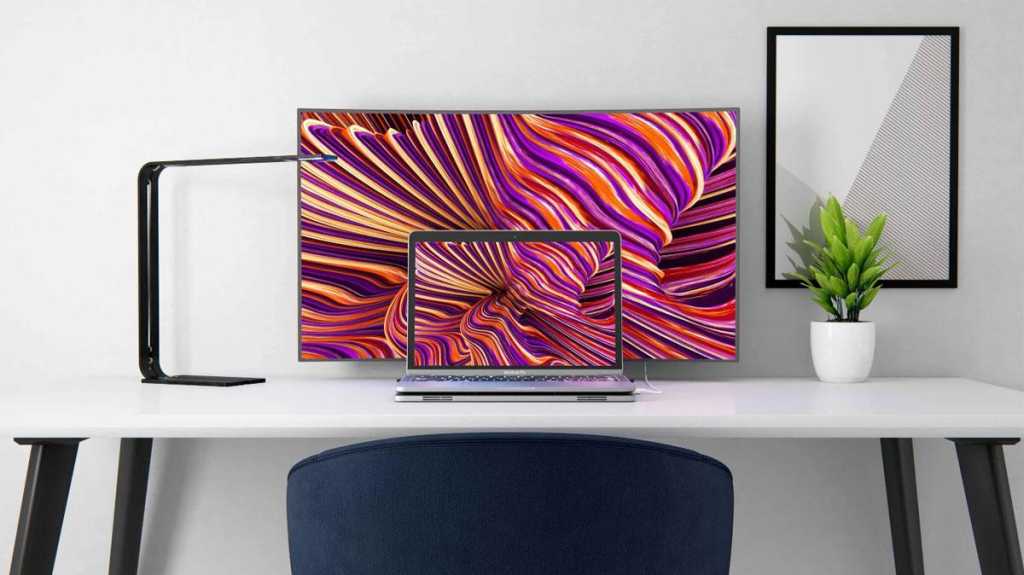 The Linedock is a great looking docking station that you’ll hardly notice as it sits underneath your MacBook. It fits right in with the Apple aesthetic, and adds nine or ten ports including three USB-C, three USB-A, HDMI/DisplayPort and an SD Card reader.

The Linedock is a docking station for MacBooks that sits underneath the Apple laptop, adding 9 or 10 ports, a battery and up to 2TB of internal storage.

It doesn’t look like most docking stations in that you place the MacBook on top, where you’ll hardly notice it.

Its design is right out of the Apple design studio. It looks like the slimmest MacBook you’ve ever seen. The 13in model is just 0.9cm (0.35 inches) in height, while the 15in and 16in models are fractionally taller at 0.96cm (0.38in). The other measurements follow the model of MacBook its fits. It weighs 912g (2 lbs) so is portable enough for travel.

It’s available only in Space Grey, so no Silver or other Apple colour.

Your MacBook connects to the Linedock using a little U-shaped connector to one of the side USB-C ports, so no need for a snaking cable.

Sitting underneath the laptop, it saves you 100% of the desk space any other dock takes up.

The Linedock 13 can only support one external display. The 15in and 16in Linedock models can support two external monitors, although, for now, Apple’s latest M1 laptops can handle just the one.

Mini DP seems an old connection to include, and perhaps shows the age of the 13in model. We’d have preferred a Gigabit Ethernet port for wired Internet connection instead, which you get on most other docking stations.

What the Linedock offers that you won’t find in most other docks is a built-in battery (up to 27,000mAh) that can charge your MacBook when it’s away from a wall charger. You can charge both the Linedock and your MacBook at the same time as the total power input is 100W. The 13in MacBooks require 61W.

The extra wattage also means you can simultaneously charge other devices via the other USB ports.

The Linedock supports something called Saiyan Mode, which offers faster laptop charging. However, in case of over-heating, you can’t use this when the MacBook is on top of the Linedock, which seems to defeat the purpose of the dock somehow. You also need to charge via a separate USB-C cable rather than the little connector.

Another unique feature is the integrated storage options. At the point of purchase, you can buy 256GB or 1TB of built-in SSD storage for the 13in model, or 1Tb or 2TB for the larger 15in and 16in Linedocks. You can also choose not to add any, and then use the SD Card reader to add more flexible and portable storage whenever you need it.

The use of 5Gbps (13in) or 10Gbps (15/16in) USB-C instead of 40Gbps Thunderbolt 3 (used by most MacBooks since 2016) means the laptop connects at much reduced bandwidth. Along with the lack of Ethernet, this will hobble the Linedock for professional use.

We applaud its eco-friendly construction, with the company claiming it is less than 1% plastic, fully recyclable and 100% Climate Neutral.

That makes it the most expensive docking station we’ve tested, but remember that you are getting a 20,000mAh or 27,000mAh laptop power bank and potentially some fast solid-state storage in the one package.

The Linedock is a great looking docking station that you’ll hardly notice as it sits underneath your MacBook. It fits right in with the Apple aesthetic, and adds nine or ten ports including three USB-C, three USB-A, HDMI/DisplayPort and an SD Card reader.

It isn’t cheap, but it will save you desk space, and those extra ports come in very handy – although the lack of a Gigabit Ethernet port is a pity, and USB-C instead of Thunderbolt 3 limits the MacBook’s generous bandwidth.

The built-in battery and SSD are unique features that may well tempt you to ignore the high price compared to other docking stations.