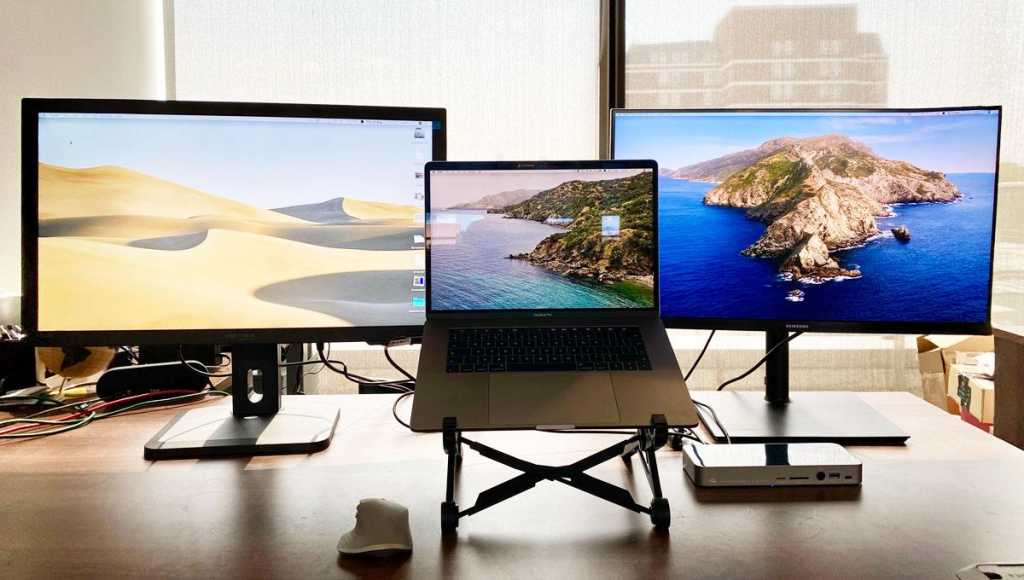 A close match for the Caldigit TS3 Plus, the OWC Thunderbolt 3 Dock has many of the ports you desire, and maybe one that you don’t.

Docking stations are an efficient way of adding a range of different ports to laptops that often boast only a few UDB-C ports onboard. Rather than connecting a few different USB-C adapters, the dock handles it all in some place.

And laptops that have Thunderbolt 3 – the faster variant of USB-C – require a dock with TB3. They can use USB-C docks but they’ll lose that 40Gbps bandwidth advantage.

Unless a TB3 dock uses a Titan Ridge chipset, a USB-C laptop can’t use the T3 docking station.

The OWC Thunderbolt 3 Dock lacks some of the high-level professional ports found on OWC’s T3 Pro Dock but does best its big brother in a few other areas, so it’s a strange lineup to compare, but we’ll try later.

There are two versions of the OWC Thunderbolt 3 Dock: one with 12 ports, the other with 14. We’ve pictured the 14-port version above.

You can get an adapter to fit a microSD card into an SD card reader, so that doesn’t matter so much. The 10Gbps USB-C 3.1 Gen 2 port on the 14-port model is certainly appreciated, but maybe not necessary if you aren’t using one of the rear T3 ports to connect a second display.

You will likely find the 12-port model a little cheaper than the 14.

The 14-port set is very close to that of the Caldigit TS3 Plus, which is available a little cheaper and features the full DisplayPort rather than Mini DisplayPort. Otherwise, it’s differentiated by being a horizontal design rather than a compact vertical.

Compare all the best Thunderbolt 3 docking stations in our comprehensive roundup.

The main difference is that the Pro T3 Dock is for the top-end creative professional who works in a 10Gb Ethernet environment. Other than that, it’s hard to rate it over its cheaper sibling for the general user. And you could add at least 5Gb Ethernet by adding an adapter, such as TrendNet’s USB-C 3.1 to 5GBASE-T Ethernet Adapter.

Both the Pro and standard TB3 docks can link up to two external 4K displays, at full 60Hz, or one 5K display also at 60Hz.

Both can charge the laptop, as you’d expect, and here the basic T3 Dock beats the Pro with an 85W charge compared to the lesser 60W of the Pro. 85W is close enough to pull charging power for a 15in MacBook Pro, where the 60W will take longer to get the laptop fully charged.

While we’re singing the TB3 Dock’s praises over the Pro, we will point out its front-facing combo 3.5mm headphone/mic port and, ahem, pro-level digital audio output port on the back. The Pro weirdly features no audio ports.

The TB3 Dock also has two more USB-A ports than the Pro Dock, and a 10GBps USB-C port at the front (14-port model only).

It does lack the super-speedy 10Gb Ethernet for wired Internet access but its standard 1Gb (Gigabit) Ethernet should be fine for most of us.

It also lacks the CFast 2.0 (newer CompactFlash) card reader, although its MicroSD and SD card slots will do nicely as this is a much more commonly found media today.

Ignoring the Pro Dock comparisons, the OWC Thunderbolt 3 Dock is a well-featured TB3 dock in its own right. It’s got most of the ports you need (exception coming up next) and plenty of them.

The one problem I have with this docking station is its Mini DisplayPort rather than a full DisplayPort. Among all the docks we’ve tested, this is the only one using this old Apple oddity.

There seems to be space for a full DisplayPort, so why choose Mini DP?

There’s no real difference between the two types of DisplayPort 1.2 (Full and Mini). They share the same bandwidth and can handle resolutions up to 4K’s 3840×2160 at 60Hz.

So what’s the problem? Most external displays don’t ship with a Mini DisplayPort cable. They come with either DisplayPort or HDMI cables; sometimes even both.

That means you will need to buy an extra adapter to connect to a DisplayPort or HDMI monitor.

And as the second external display uses either the USB-C port or the second Thunderbolt 3 port, you will probably need another adapter for this too – unless the display has a USB-C connection, which a small but growing number do.

You can find the dock in two colors: Space Gray or Silver.

The OWC Thunderbolt 3 Dock has a great set of ports, and charges at a top-end 85W – powerful enough for a 15in MacBook Pro. The 16in MacBook Pro comes with a faster 96W wall charger but 85W will be enough to charge it pretty fast and certainly not drain even when connected to multiple devices.

The five USB-A ports are all 5Gbps, and there’s a 10Gbps Gen 2 USB-C port on the front of the latest 14-port model, which not many T3 docks have.

That aside, the OWC Thunderbolt 3 Dock has everything a dock should have in a slick-looking slim case that will look good in any laptop setup.

Its port set rivals Caldigit’s TS3 Plus, and you might decide to choose between the two on cost only, and if you have a spare Mini DP adapter, of course.