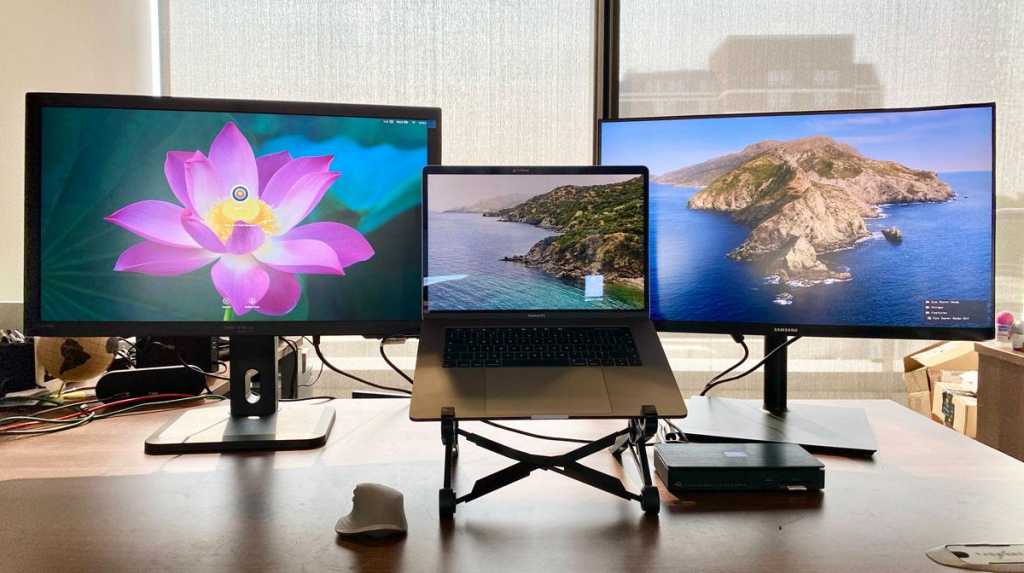 The OWC Thunderbolt 3 Pro Dock is aimed at digital image professionals, and has ultimate performance at its heart, including 10Gb Ethernet.

The Thunderbolt 3 Pro Dock from OWC is built for ultimate bandwidth and speed, and is aimed at creative professionals who require the fastest speeds possible.

This can turn a laptop into a powerful desktop-based workstation, while simply disconnecting it returns it to road-warrior status.

There’s just one DisplayPort on this dock, but you can add a USB-C display or another DisplayPort or HDMI monitor with a USB-C adapter. A lot of other docks will have a second DP or HDMI port, but OWC requires an adapter for that second display.

The two Thunderbolt 3 ports mean you can connect to and power your laptop and daisy-chain up to five TB3 devices.

If you are adding a second monitor via USB-C, then it needs to be at the end of the five-T3 daisy chain.

Nearly everything about the Pro Dock is about as fast as you can get.

For example, it’s got blisteringly fast 10Gb Ethernet, compared to most other docks that have standard Gigabit (1Gb) Ethernet.

10Gbps Ethernet is not common but it will hugely boost wired data transmission – say for uncompressed video – in the proper environment.

There’s a 6Gbps eSATA (External Serial ATA) port with port multiplier support, so you can access multiple drives within a multi-bay RAID. This won’t be much use to the general user but pros that require a lot of fast storage will appreciate it, especially if they have older drives.

We haven’t seen eSATA on any of the other docks we’ve tested, so if this is useful, the OWC Pro Dock is the place to get it.

OWC docks come with a neat feature: Dock Ejector. With a software download, this allows you to disconnect with a single click while ensuring that all data has been written before any disk is unmounted.

Curiously, there’s no audio In or Out ports on the OWC Thunderbolt 3 Pro Dock. In comparison, the Caldigit TS3 Plus has front-facing 3.5mm Audio In & Out ports and even a Digital Optical Audio (S/PDIF) port.

OWC’s lesser-powered Thunderbolt 3 Dock (note the lack of the word Pro) does have a headphone/mic port on the front and a digital audio output on the back. And this supposedly lesser dock can power at 85W to your laptop, compared to the Pro’s slightly weak 60W. Read our OWC Thunderbolt 3 Dock review.

OWC explains the lack of audio by pointing out that it’s aimed at the video and photography markets, although I would have thought that audio was a key part of any video work. And surely photo people like to listen to be a bit of Spotify while working…

If you aren’t bothered by the lack of audio input/output and can handle slightly longer charge times, then these inconsistencies won’t bother you.

With both next-generation CompactFlash CFast (up to 370MBps) and SD 4.0 card readers, you can manage multiple media card types simultaneously at the highest speeds. This can also be an inexpensive way of adding ultra-portable backup storage, with even 512GB cards being affordable today.

The designer metal case is slim (3.5×21.2×10.8cm), and features a switchable on/off cooling fan. OWC doesn’t recommend the fan is switched off for any more than 30 minutes, but as it is hardly noticeable this shouldn’t be necessary except when you need absolute silence.

Built for creative professionals, the Pro Dock is happy on a mobile DIT (Digital Image Technician) cart. Its power supply even uses a 6-port PCI Express connection that is ultra secure, in case it gets tugged while the cart is moved.

Talking of security, there’s a special locking slot on the back to keep this valuable piece of kit where it is supposed to be.

The Security Slot is useful as the T3 Pro Dock is not cheap. The price is reasonable, though, if you really need that lightning-fast wired networking. 10Gb Ethernet isn’t commonplace, and so certainly adds to the cost – as do the CFast reader and eSATA.

If you don’t need this, we’d recommend other docks that come in cheaper.

The OWC Thunderbolt 3 Pro Dock is aimed at digital image professionals, and has ultimate performance at its heart.

Principally, it features 10Gb Ethernet rather than the standard 1Gb (Gigabit) connection.

It also features a CFast 2.0 card reader for people still using CompactFlash in its latest version.

There are Thunderbolt 3 docking stations with more ports and beefier chargers, but none have 10Gb Ethernet or CFast 2.0. You can add these to other docks, but the Pro Dock has it all built-in, plus a really secure power-supply connection in case it’s used on a pro DIT cart.