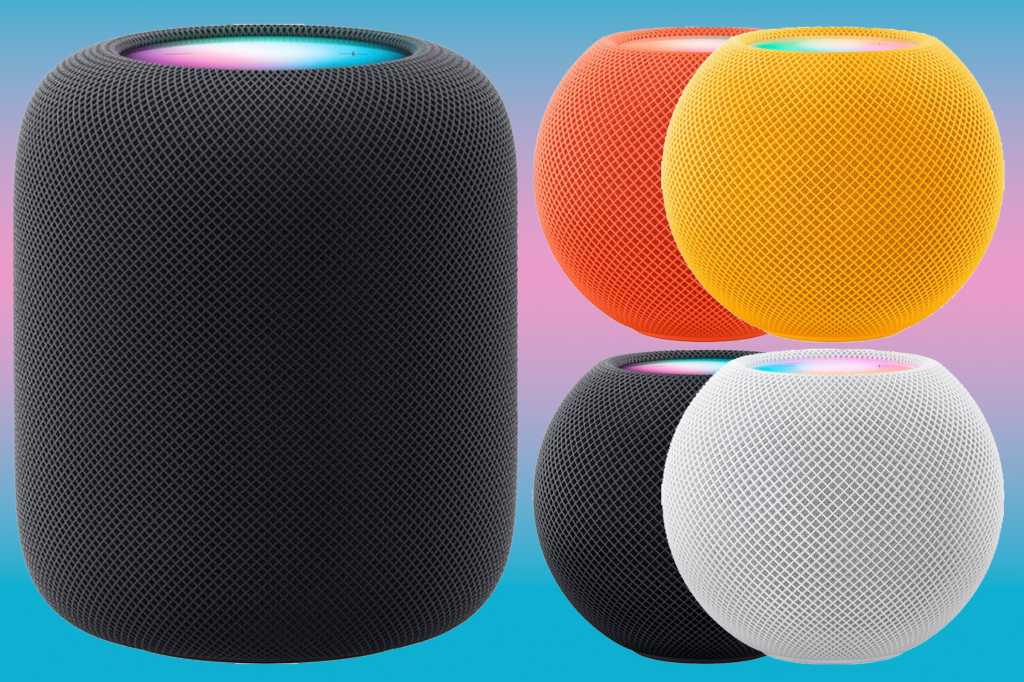 Image: Foundry
At a Glance

It really comes down to your audio quality demands and budget. The 2nd gen HomePod is a higher-end speaker that delivers incredibly pleasing sounds. But, for around a third of the price, you can get the HomePod mini which provides audio that is good enough for most occasions. In fact, you can buy two HomePod minis to make a stereo pair and still save $100 compared to the HomePod.

When Apple launched the HomePod in February 2018 it was generally praised as an excellent speaker. But with a high price and a lot of competition from Amazon and Google’s smart speakers, the HomePod was at a disadvantage. Then in November 2020, Apple introduced the HomePod mini, which, brought many of the same features as the HomePod at a much lower price.

HomePod mini’s arrival meant that those who wanted an Apple smart speaker no longer needed to pay up to $299/£299, and that may well have been the reason why Apple discontinued the original HomePod in March 2021. Most people seemed to prioritize price over sound quality for the past two years, the HomePod mini was the only smart speaker you could buy from Apple.

That changed in January 2003, when Apple reintroduced the larger HomePod with very minor changes from the original model. In this article, we will look at how the 2nd generation HomePod compares to the HomePod mini. We’ll also address some of the differences between the 2023 HomePod and the HomePod Apple introduced in 2018.

The big question is why would you buy a HomePod when you could buy three HomePod minis for the same price? The main reason to buy the HomePod instead of the HomePod mini is its sound quality. While the mini is a good speaker, the larger HomePod offers significantly better sound than the small model, and audiophiles should definitely spring for the more expensive model.

The 2nd-gen HomePod is almost identical to the original HomePod, with the same mesh exterior, but there are some differences. The display on the top is a little larger and instead of the white and space gray of the original, the color options are either White or Midnight, which is a tad darker than the original’s space gray.

The HomePod mini comes in a selection of five colors, with space gray and white joined by blue, yellow, and orange. It’s also half the height of the standard HomePod and more spherical in shape, but it shares the mesh exterior and display on the top that makes it recognizable as a HomePod.

The original HomePod had an integrated power cable that shouldn’t be disconnected (it was possible to yank out the cable from the original HomePod which could damage the speaker). The HomePod mini cable also can’t be disconnected from the speaker. We are glad to report that the new HomePod does have a detachable cable, and rather than the proprietary connection of the original HomePod this is a standard cable, so if you were to lose it then any cable with a figure-eight connection will work. This could be useful if you want to set your speaker up in a place where the cable access is a bit tricky. We’d love Apple to include a battery inside the HomePod so that it didn’t have to be connected to the wall and could be truly portable, but this hasn’t happened yet.

As we have already indicated, the main difference between the two types of HomePod is the audio capabilities. Inside the 2nd-gen HomePod is a speaker array comprised of five beamforming tweeters and a high-excursion woofer with a custom amplifier. Curiously, the 1st gen HomePod had seven tweeters, it also had more microphones (six in the old model, four in the new).

The larger HomePod also includes a low-frequency calibration EQ microphone which combines with room-sensing technology to enable the HomePod to monitor and analyze the acoustics and adjust sound frequencies and maximize acoustic performance in response to the surrounding environment.

The size of the HomePod mini chassis means it can’t accommodate all of this audio splendor, so it has fewer speakers and microphones than the larger model, but it does offer a “full-range driver” and “dual passive radiators,” that allow for “deep bass and crisp high frequencies”, according to Apple. In our testing, we found the sound quality wasn’t as deep as the larger HomePod and was particularly lacking in bass, but still powerful enough to fill a room with sound, especially if you pick up a pair of them and set them up as stereo speakers.

It’s not only the number of tweeters and microphones that is different, the HomePod and HomePod mini are powered by different Apple chips.

We were surprised to find that the 2nd gen HomePod is powered by an Apple Watch processor, which does feel a bit like a step back from the A8 in the original HomePod. Apple’s opted for a chip suited to a compact design, rather than the power of a more modern iPhone chip, but we assume there is enough power in the Watch chip to justify the move.

Also surprising is the fact that the 2nd-gen HomePod supports slower Wi-Fi than the first HomePod. The original model supported 802.11ac, better known as Wi-Fi 5. The newer HomePod features the aging Wi-Fi 4 (802.11n) standard, as does the HomePod mini. The 2023 HomePod, like the mini and the original HomePod, still has Bluetooth 5 instead of 5.3.

The HomePod 2nd-gen and HomePod mini both feature Apple’s U1 chip (which wasn’t in the original HomePod). The U1 allows you to “hand off” music playback from your iPhone (11 or newer) to your HomePod, so you can carry on listening to your music when you leave or enter your home. You can also see media controls without having to unlock your ‌iPhone‌ and get personalized listening suggestions.

The cables of the HomePods are different though: the HomePod mini’s cord has a USB-C cable like the original HomePod and the newer HomePod. Rather, it ships with Apple’s 20W USB-C power adapter. If you lose this then any 20W USB-C charger will suffice, but it does need to be 20W.

The 2nd-gen HomePod and HomePod mini also have a temperature and humidity sensor for tracking the conditions of the room they’re in. Furthermore, the larger HomePod also listens for smoke and carbon monoxide alarms and can send an alert to your iPhone when detected.

Both the HomePod mini and 2nd gen HomePod include Thread support to be used as a Home hub for Matter devices. And all of Apple’s HomePod speakers offer Siri support for a variety of uses, including playing music, setting alarms and timers, and sending messages.

There are some good reasons why the 2nd generation HomePod is a better choice than the HomePod mini. If you care a lot about sound quality or want support for Dolby Atmos and Spatial Audio, then the HomePod is the only option. But if, like the vast majority of people, you are only looking for a decent smart speaker to use with Apple Music or Spotify, then the HomePod mini will do the job for a fraction of the price.