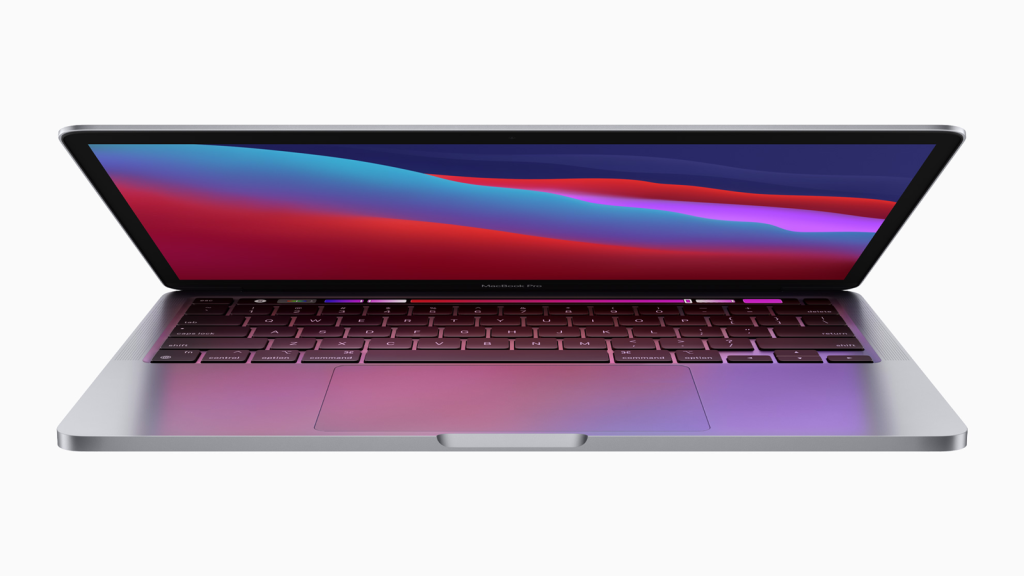 The fact that Apple has brought new levels of performance and battery life to the MacBook Pro, all without an increase in price, makes the new M1-powered machines incredibly easy to recommend. These are without doubt the future for the Mac, so if you want power that can last long into the night, not to mention the years ahead, these are the ones to buy.

Apple has unveiled a new range of Macs that now feature its own M1 chip. These include the MacBook Air (M1), Mac mini (M1) and MacBook Pro (M1). We take a look at how the latter compares to the Intel-powered models it replaces, as well as the remaining 13in MacBook Pro 2.0GHz models vying for your cash.

As we’ve already seen with the other M1 models that have been released, Apple hasn’t taken the opportunity to hike the prices of the new devices. Instead, they start at the same price as the previous MacBook Pros did.

So, with this in mind, here’s how the new range breaks down:

There are also the various build-to-order options that increase both the specs and price tags. The devices are available now, direct from Apple or any of the usual electronics retailers.

If you aren’t ready to move to M1, you can still buy the Intel-based 13in MacBook Pros at the moment, and here’s what is on offer and what it will cost:

Apple also sells 16in MacBook Pro models, but we aren’t going to compare these to the new models as they are really a different catagory of laptop with a very different market.

There’s not much change in the outwards appearance of the new MacBook Pros when compared to the previous models or the remaining Intel variants. The chassis retains the silver or space grey livery options and 304.1mm x 212.4mm x 15.6mm dimensions across the range, with the weight practically identical too.

Open the lid and you’ll find the same Magic Keyboard and trackpad on all the models, alongside the Touch Bar and Touch ID sensor. Keeping with the theme, Apple installs identical 13.3in displays that offer 2560×1600 resolutions, 500 nits of brightness, Wide colour (P3) support and True Tone technology. 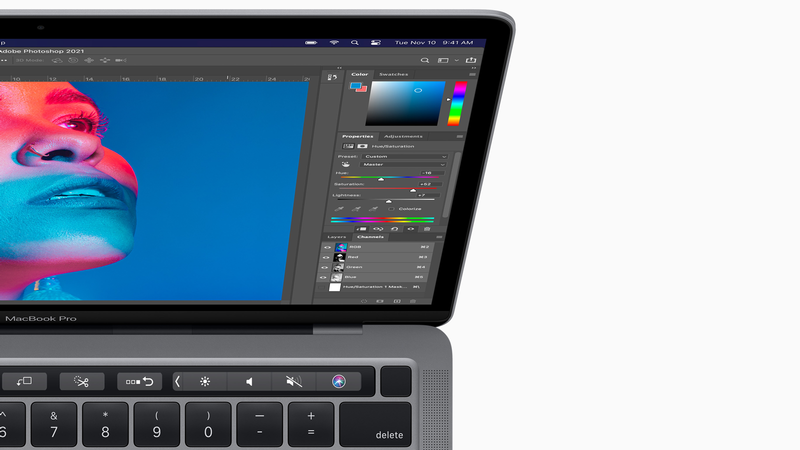 Audio is the same, with stereo speakers that offer wide stereo sound and support Dolby Atmos playback. Apple did upgrade the microphones though, going from the three-mic array to a new ‘Studio-quality’ three-mic array. Video calling should also see some improvements on the MacBook Pro (M1), not due to any physical upgrades, as all come with the standard 720p FaceTime HD camera, but through how the new chip processes the images.

The only noticeable difference is that the current Intel machines have four Thunderbolt 3/USB-C ports, while the M1 Pros keep the same dual arrangement as the models they replace, but this time upgraded to the new Thunderbolt/USB 4 grade, presumably due to moving from Intel to Apple’s own silicon.

With so much of the external nature of the MacBook Pros being the same, what’s the big deal about the new models? Well, when we delve into the components, that’s when the real differences appear.

Since Apple announced that it was intending to ditch Intel and go with its own chips, there has been a massive amount of anticipation surrounding the first products that would arrive with this feature. Well, now that they’re here, it seems like Apple was right to take this route.

The M1 comes with an eight core CPU and an eight core GPU, which combine to deliver some serious power. Apple claims that the CPU is up to 2.8x faster than the previous generation MacBook Pro and that the GPU is up to 5x faster than its predecessor. These advances should give the new models a serious advantage when it comes to rendering video, editing photos, coding, and even gaming. We’ve already seen that these new M1 Macs are getting rave reviews, so the improvements must be proving themselves true.

Apple does give some specific figures when it comes to the M1, with rendering a complex 3D title in Final Cut Pro being up to 5.9x faster, the ability to perform machine learning tasks in Create ML up to 11x faster, and playing back full-quality, 8K ProRes video in DaVinci Resolve without dropping a single frame. Not too shabby. 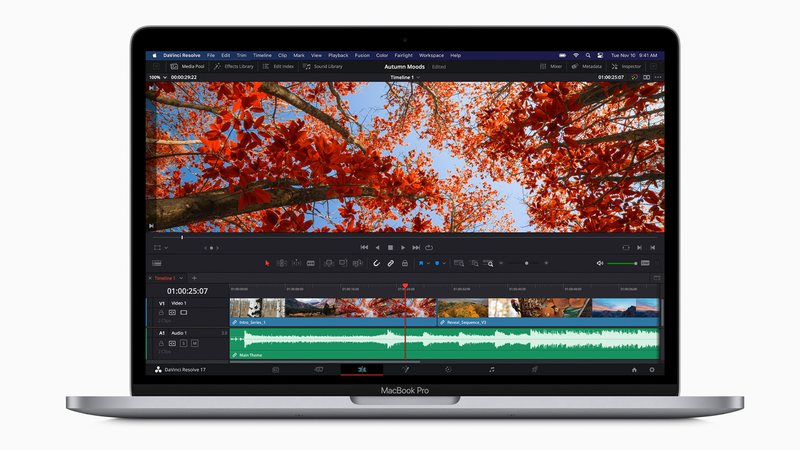 Apple does claim that the new MacBook Pro (M1) is the “world’s fastest compact pro notebook”, but we’ll have to see it running in lab conditions against the competition before we can accept that statement. Suffice to say, it’s a bit quick. Read our more detailed look at the new technology to see how good Apple’s M1 chip really is.

One of the most interesting innovations in the M1 is the fact that Apple has incorporated the memory into the SoC rather than as external chips, as you’d find on the Intel versions. It’s called Unified Memory Architecture, and should mean it can access data much quicker, as there’s no need to copy it out to the other memory locations. This could explain why the maximum amount is 16GB as opposed to the 32GB that’s available on the remaining Intel Pros. If the UMA works as Apple says it does, then it could be a major step forward for the Mac.

The other major development that will appeal to most users is the fact the efficiency of the new silicon means that battery life has seen a massive improvement. Where the Intel MacBook Pros could deliver up to ten hours of battery life, Apple claims that the M1-powered laptops can double that to twenty hours! If that’s true, then it’s a game changer. Twenty hours? That’s crazy!

If you rely on multiple screens from your Mac laptop, usually connected to a Thunderbolt 3 docking station, then sticking with Intel is your best option.

There is, however, a workaround to add two or more external displays to an M1 MacBook, although it requires downloading a third-party software driver.

Other than these subtle, but significant, changes, the MacBook Pro line is very much as it was before the M1 models arrived. Here’s a breakdown of the technical specifications of the current offerings:

All of the current range of MacBook Pros will be compatible with macOS Big Sur, as will those replaced by the M1 machines. Apple has something a bit special cooked up for the new models though, as macOS has been optimised to make the most of the new chips. These tweaks include almost instant wake-up from sleep, as you’d get with iPhones and iPads, faster launching of apps, and of course that amazing battery life.

One thing to bear in mind though. While the official Apple apps are M1-ready, it will be a little while before other applications become Universal apps that can run natively on all of your machines. Until then, Apple’s Rosseta 2 software should keep things ticking along. Read our guide to which apps will run on M1 Macs to check if any mission-critical ones are not compatible at the moment.

The Intel-powered 20GHz MacBook Pros were already powerful machines that could get plenty of work done without a sweat. Now, though it seems that their age is coming to an end. The Apple M1 silicon grants the latest Pros a new lease of life, with improved performance, speedier integration with macOS Big Sur, and frankly ridiculous battery life.

Perhaps the biggest bonus is that you don’t even have to pay more for the privilege, as Apple has priced the new models the same as the old models that punched their weight far below these. We fully expect these to sell like crazy, as they should, leaving Intel firmly in the past.